In Egypt, the archeological discoveries never end. This was made all the more clear by the recent discovery of a colorful tomb in Saqqara, home to some of Egypt's earliest pyramids. The incredibly well-preserved tomb contains vibrant wall paintings that look like they were painted yesterday, when in reality the tomb was created over 4,000 years ago. To celebrate the discovery, Prof. Khaled al-Enani—Egypt's Minister of Antiquities—recently led over 50 foreign dignitaries on a tour through the site.

It's believed that the tomb, which is located within a large necropolis, was created during the Fifth Dynasty. This period spanned the early 25th century BCE until the mid 24th century BCE and was known as a time when funerary prayers began to be inscribed on royal tombs. In this particular case, the exceptional tomb was created for a dignitary named Khuwy.

Several aspects of the tomb lead researchers to believe that Khuwy was a man of great importance. Architecturally, it has a tunneled entrance, which is a feature typically reserved for pyramids—the tombs of the pharaohs. Artistically, the colors of the paintings are considered “royal colors” by officials. These clues bring into question Khuwy's influence and his relationship with the Fifth Dynasty's longest-ruling pharaoh, Djedkare Isesi. 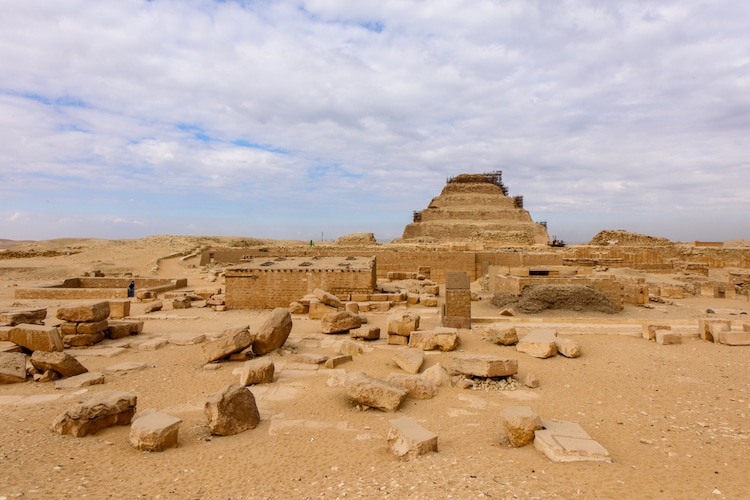 Djedkare's pyramid is located nearby in Saqqara and one theory is that Khuwy was a relative of the leader. Others believe that the lavishness of the tomb was instead owed to the Djedkare's reforms on funerary cults. Whatever the cause, what we're left with are incredible examples of the artistry of ancient Egypt.

In addition to the tomb decoration, archaeologists also found Khuwy's mummy and canopic jars—used to hold organs—scattered in several fragments. Egyptologists hope that the newly discovered tomb will give them more insight into Djedkare's reign, as the pharaoh's own tomb was raided prior to excavation in the 1940s. While Djedkare appeared to be held in high regard even after his death—he was the object of a cult until at least the end of the Old Kingdom—he is still a somewhat enigmatic leader.

Take a peak inside this colorful, 4000-year-old tomb discovered in Saqqara, Egypt.