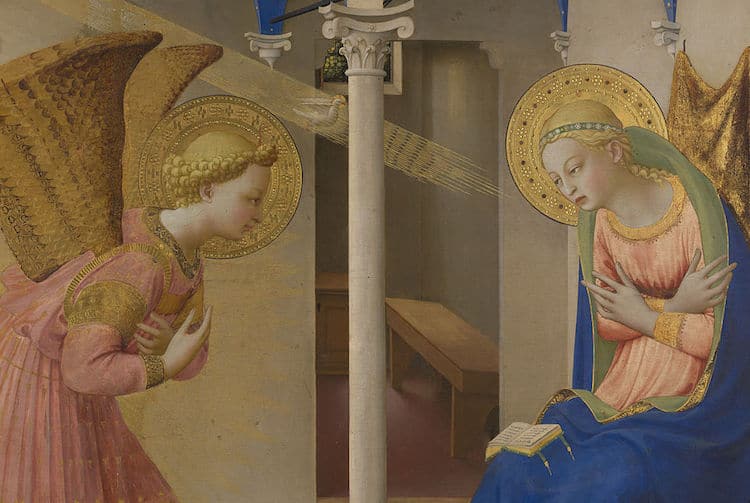 Whether aiming to perfect a technique, master a subject, or simply explore an interest, artists often return to the same iconography over and over again. This approach has been taken by some of art history's most influential figures, with Fra Angelico—a religious painter of the Renaissance—at the forefront.

Over the course of roughly 15 years, Angelico completed several renditions of the Annunciation, an ethereal event that remains at the core of certain Christian teachings. Rendered as spirited panel paintings, shimmering altarpieces, and vibrant frescoes, Angelico's Annunciations seem to float above other artists' interpretations.

What is the Annunciation? 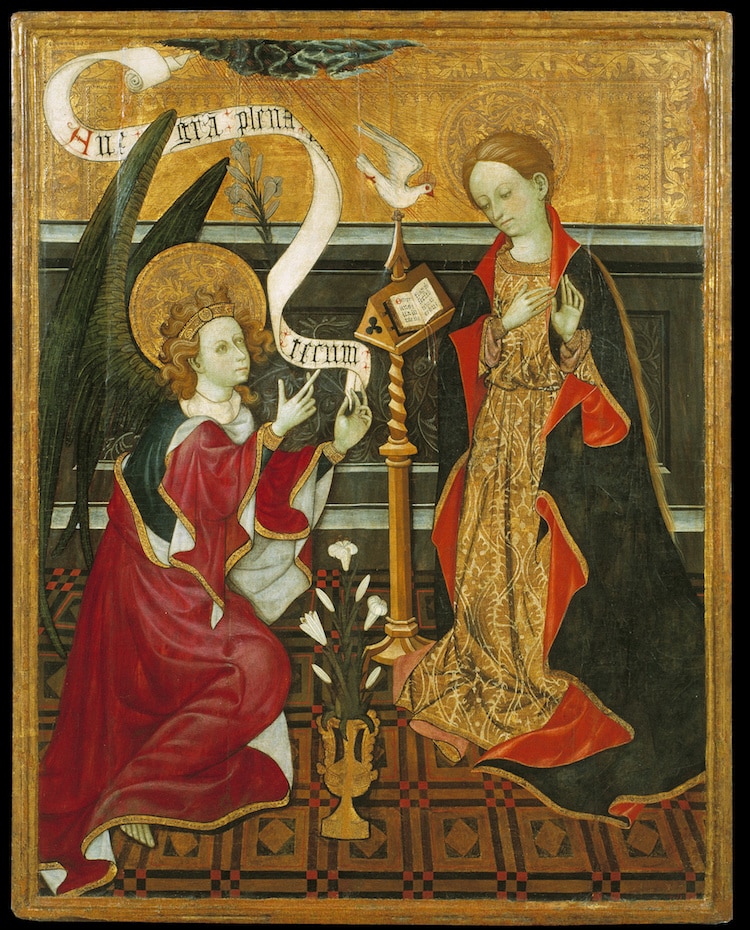 In the Catholic and Eastern Orthodox traditions, the Annunciation refers to the event in which the Archangel Gabriel told Mary that she was chosen by God to conceive and bear his son, Jesus. The Annunciation is described in Luke 1:26-28:

In the sixth month, Gabriel the angel was sent from God to a town in Galilee called Nazareth, 27 to a virgin engaged to a man called Joseph, from the family of David. The virgin was called Mary.

28 ‘Greetings, favored one!’ said the angel when he arrived. ‘May the Lord be with you!’

Given both its religious significance and the simplicity of the scene itself, the Annunciation has been a favored subject among artists for centuries. Notable renderings of this scene include an ancient Roman fresco in the Priscilla catacomb (a quarry used for Christian burials in the 3rd century); a richly detailed, large-scale painting by Northern Renaissance pioneer Jan van Eyck; a symbolic panel painting by a young Leonardo da Vinci; and, of course, a dedicated series of works by Fra Angelico, a Tuscan-born friar whose paintings helped shape the High Renaissance.

Given the Annunciation's popularity among all kinds of artists, its appeal to Fra Angelico—whose adopted name translates to “Angelic Friar”—is no surprise. 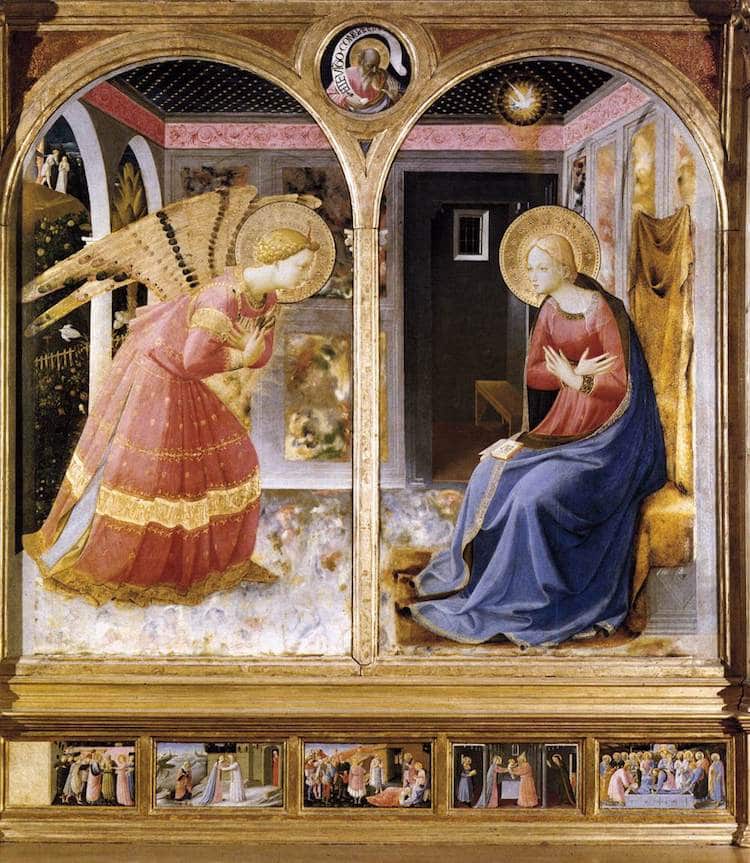 Angelico first explored this iconography in 1430 with the Annunciation of San Giovanni Valdarno, a piece named for the Tuscan town where it now resides. Rendered in tempera—an egg yolk-based paint popular among Medieval artists—this piece laid the groundwork for Fra Angelico's later Annunciations, which are characterized by the winged Gabriel on the left-hand side of the composition, the Virgin Mary on the right, and a detail-oriented emphasis on their surroundings, including figure-framing architecture and Adam and Eve—in the midst of their expulsion from the Garden of Eden—in the distance. 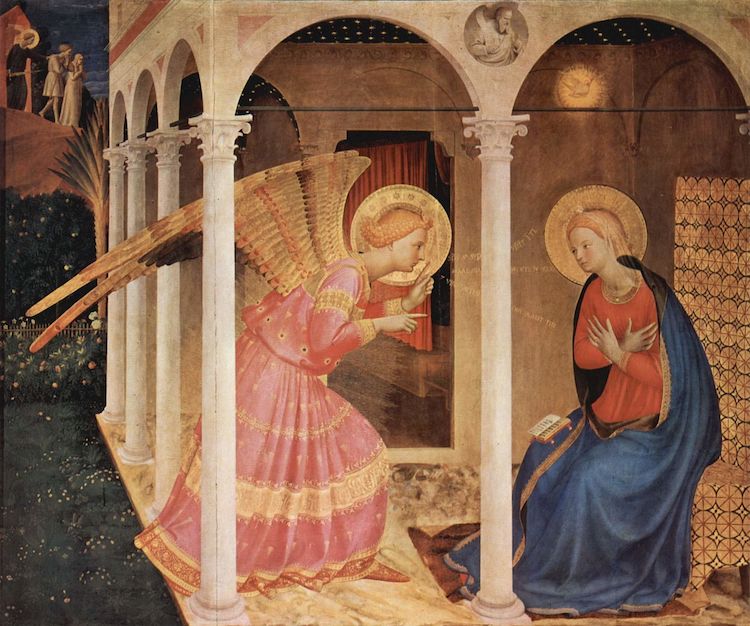 Just one year after completing the Annunciation of San Giovanni Valdarno, Angelico started working on a second similar canvas. Known today as the Annunciation of Cortona, this tempera panel painting bears striking similarities to its predecessor. There are discernible differences, however, including a change in Gabriel's gesture (rather than crossing his arms over his heart, he now points one hand toward Mary and holds the other to his mouth), the addition of Corinthian columns, and a subtly increasing emphasis on the presence of Adam and Eve. 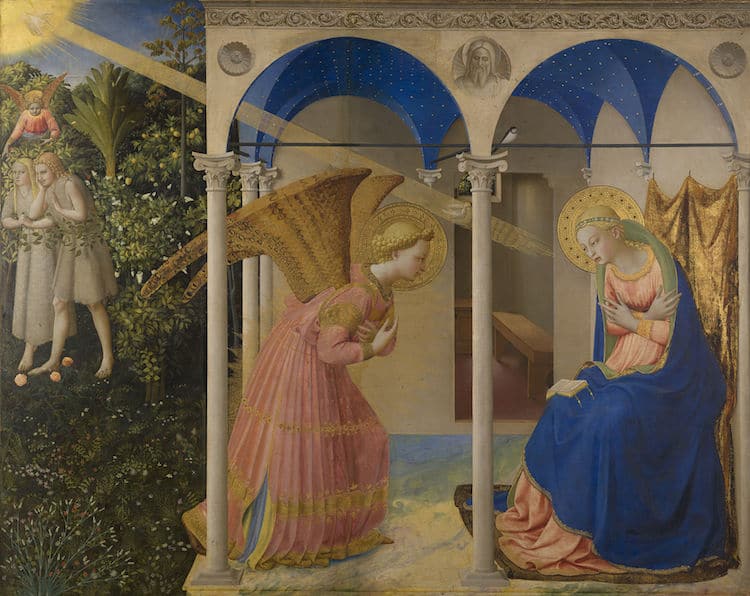 In 1435, Angelico completed his third Annunciation. In this rendition, Gabriel's arms return to his chest—an aesthetic choice that Angelico would retain when completing his final two Annunciation paintings. Unlike his other pieces, however, this version includes a beam of light that pierces the composition. Intended to represent the Holy Spirit, this diagonal ray draws the eye from Adam and Eve—who, in this painting, are at their largest—to the seated Virgin Mary. 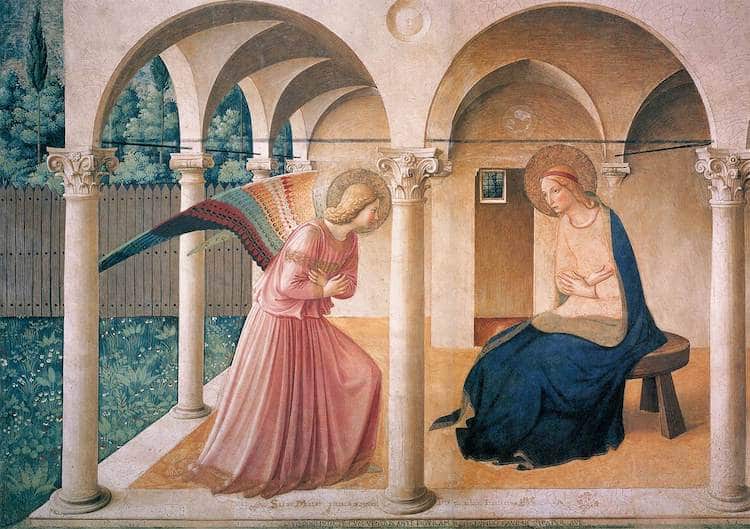 In 1440, Fra Angelico transformed his painted vision into a fresco. Commissioned for the Convent of San Marco—a Dominican friary decorated entirely by Angelico—this piece remains the most famous of his Annunciation depictions. Ironically, however, with its naturalistic color palette, secular scenery, and a lack of Adam and Eve, it is also among his simplest—second only to another Annunciation fresco found in the chapel. 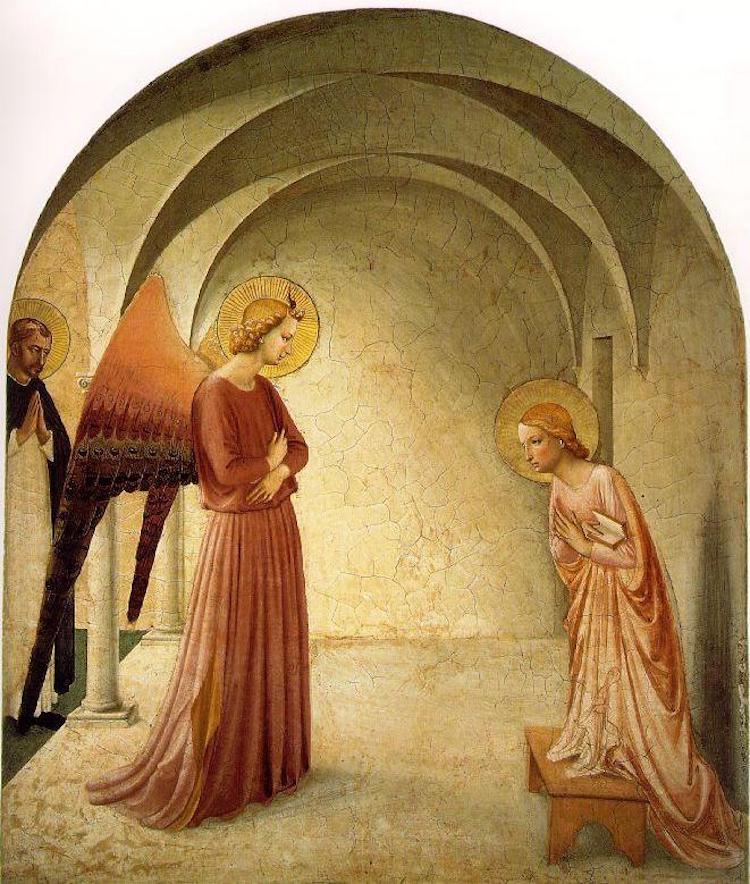 Situated in a corridor of sleeping cells, this piece breaks away from Angelico's other Annunciation paintings, as it is cleverly set in the convent itself.

The Legacy of the Annunciation 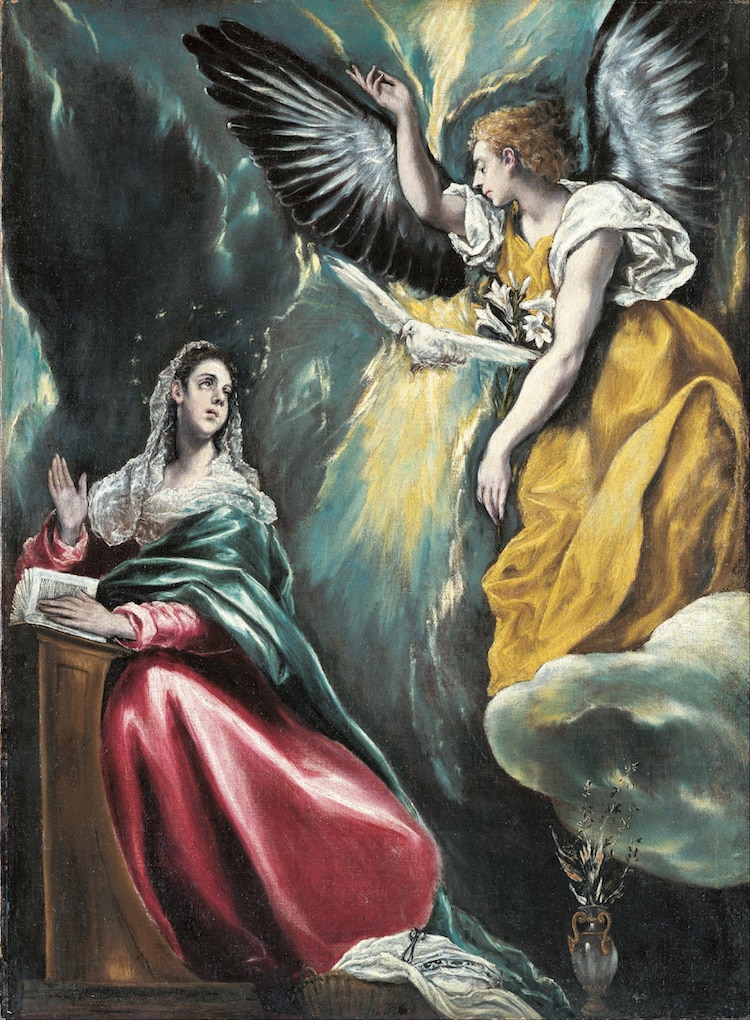 While Fra Angelico was far from the first artist to explore the Annunciation, his interpretations are among the enduring trend's most well-known—both in Renaissance art and beyond. In fact, it is this string of works that prompted Vasari, an important historian and contemporary of Angelico, to pinpoint and praise his “rare and perfect talent.”

Additionally, Angelico's tireless dedication to this age-old subject matter inspired future artists to follow suit. For example, El Greco—a Spanish artist believed to be the “first great religious painter since Fra Angelico“—also revisited the subject numerous times throughout his life and career, driven by the pertinent belief that “you must study the Masters but guard the original style that beats within your soul.”