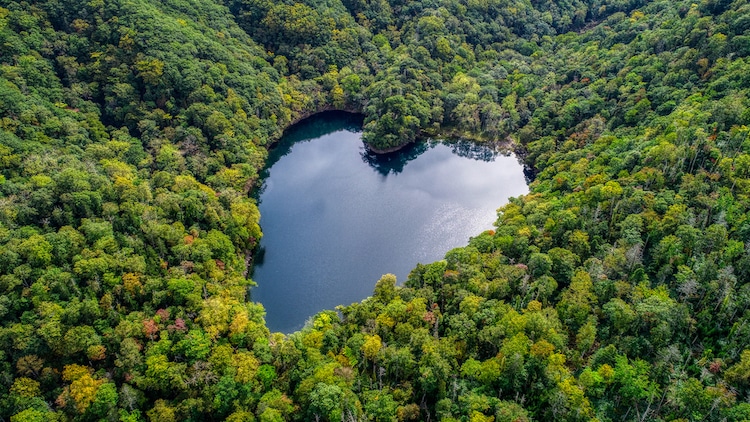 Nestled in a remote area of Japan's Hokkaido island, Lake Toyoni has gone from a hidden gem to a must-see travel destination. This freshwater lake is surrounded by a lush forest that would be impressive on its own, but the lake has made a name for itself due to its unusual shape—a heart.

When viewed from above, the lake's heart shape comes into full view. Reflecting the sky above, it becomes a shiny blue heart surrounded by rich green or red-orange leaves—depending on the season. The small lake became an overnight sensation once it was featured in a popular Japanese television commercial. As people realized that “Heart Lake” was real, and not the result of creative Photoshopping, they flocked to the lake in droves.

Lake Toyoni, which used to be known as Kamuito or “A Marsh Where God Lives,” is an ideal location for aerial photographers. Flying a drone up into the sky, it's easy to get the perfect shot of the heart-shaped lake. There are even helicopter tours that take travelers to get a glimpse of the lake. The aerial view is also good for another reason. Lake Toyoni is located within a protected forest that is home to many wild animals. This also includes a large population of brown bears, which hikers are told to be aware of.

Picturesque in any season, many photographers have seen their work go viral after posting a photo of Lake Toyoni. While its heart shape certainly makes it romantic and sentimental, it's also incredible to think that this body of water was created naturally.

This heart-shaped lake in Japan has become an overnight sensation after being featured in a commercial.

Lake Toyoni is a small freshwater lake that reveals its romantic shape when photographed by air.