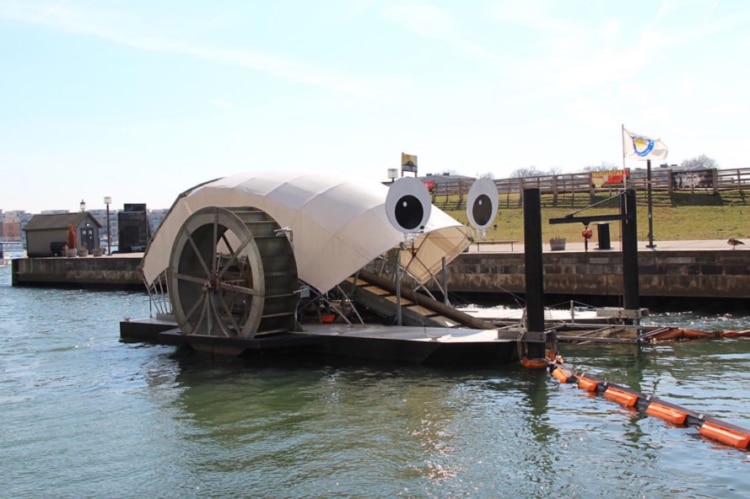 Image via Waterfront Partnership of Baltimore

Mr. Trash Wheel and Professor Trash Wheel sounds like cute cartoon characters, but they are actually garbage fighting machines that are helping clean up Baltimore's Inner Harbor. These solar- and hydro-powered trash interceptors have effectively been combatting water pollution since 2014.

The concept was first suggested by local sailor and engineer John Kellett, who eventually gained the support of non-profit Water Partnership of Baltimore to execute his plan. Solar panels and river currents turn the wheel, which activates a conveyor belt. The trash gets pulled in by floating containment booms and lifted by rotating forks onto the conveyor belt. It's then deposited in a dumpster, which is emptied when full.

In action since 2014, Mr. Trash Wheel's googly eyes have gained him quite a following since he was implemented. He even has a Twitter account and t-shirts. In fact, he's such a success that Kellet and the Water Partnership of Baltimore raised funds for a second, smaller assistant named Professor Trash Wheel. She was launched in December 2016 in a different part of the Inner Harbor. All told, these garbage collectors have hauled more than a million pounds of trash since being installed. 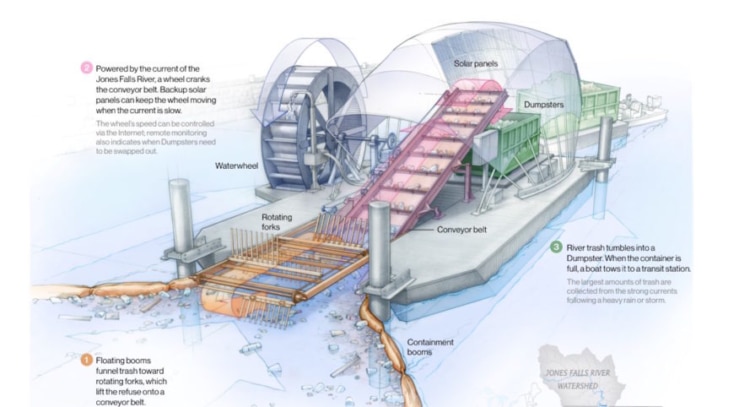 Most of what's collected are plastic bags, cigarette butts, plastic and glass bottles, and polystyrene containers. It's important to remember that the majority of this trash comes from people throwing garbage on the ground, which is then carried into the river during storms.

And while Mr. Trash Wheel and Professor Trash Wheel are cute and cuddly, they are only one method of obtaining the Water Partnership's goal of making the harbor swimmable by 2020. Educating the public and changing cultural habits will be key to ensuring Baltimore's waters remain free and clear of trash.