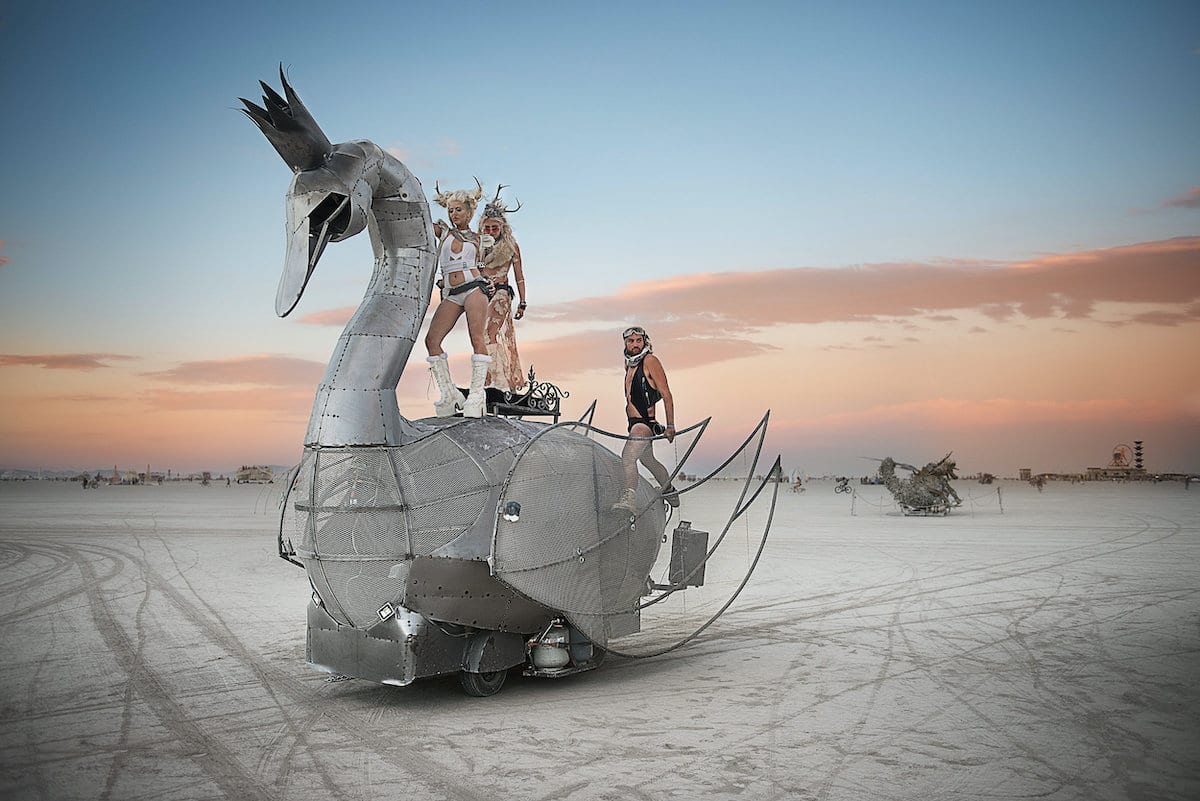 German visual artist, photographer, and filmmaker Alexandra Lier merges the analog and digital aspects of her craft to transmit the viewer into an immersive world with its own captivating narrative. Best known for her photography, Lier’s stunning work has been featured in a variety of online and print media. She has also published her photographs in two fine art books and is now working on a third titled Mutant Vehicles. This latest project is centered around the incredible and otherworldly “mutant vehicles” of Burning Man. It compiles surreal photographs of these remarkable machines into one interactive book.

With her love of the desert and fascination with cars and motorcycles, it didn’t take long for Lier to immerse herself into this unique and unpredictable world. As a result, she was able to get to know the artists, designers, and engineers behind these incredible machines. Now, Mutant Vehicles stands as a tribute to their amazing work, sharing their artistry and providing an up-close experience for viewers everywhere.

We had the chance to chat with Lier and learn more about her latest project Mutant Vehicles and her experiences at Burning Man. Read on for My Modern Met's exclusive interview. 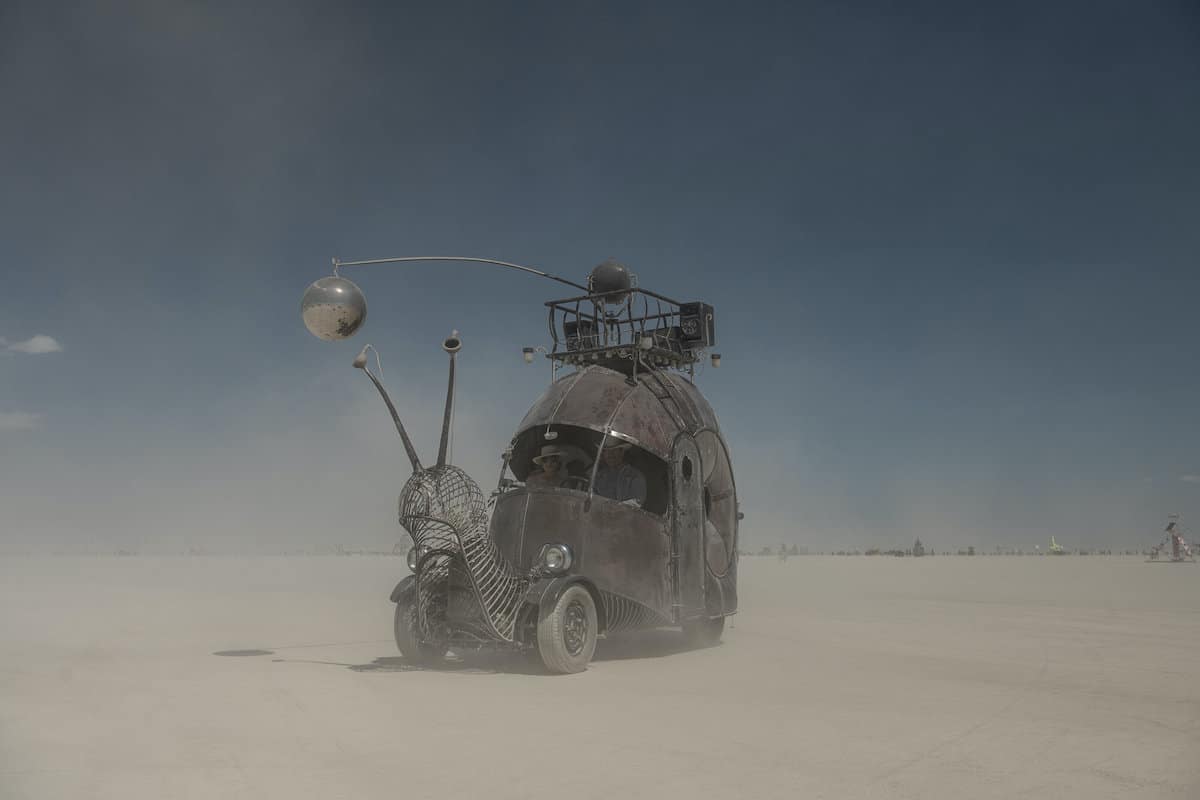 How did you get the idea for Mutant Vehicles?

I was fascinated by cars and motorcycles even as a child. I played with Hot Wheels instead of Barbie dolls. On the one hand, this led me to start wrenching on old cars and motorcycles at an early age, and on the other hand, I was interested in car culture, history, and design. All my art projects are based on this passion. Generally, I work on my projects for several years. I like to understand and get to know the people and the culture. I then can integrate that into my photos or movies.

What has been the process of bringing your ideas to life?

Since 2014, I have been working more intensively with Mutant Vehicles. I took photos and got to know the artists. It was important to me that I also visited the artists in their garages to capture where and how the magic happens. Often there are years of intensive work, a lot of ingenuity, and a lot of passion in a work of art. Participation in the Burning Man festivals had to be very well prepared. On-site, you have to be focused and persistent as well as flexible and spontaneous. Only in this way was it possible to shoot the vehicles in the desert at the perfect moment. 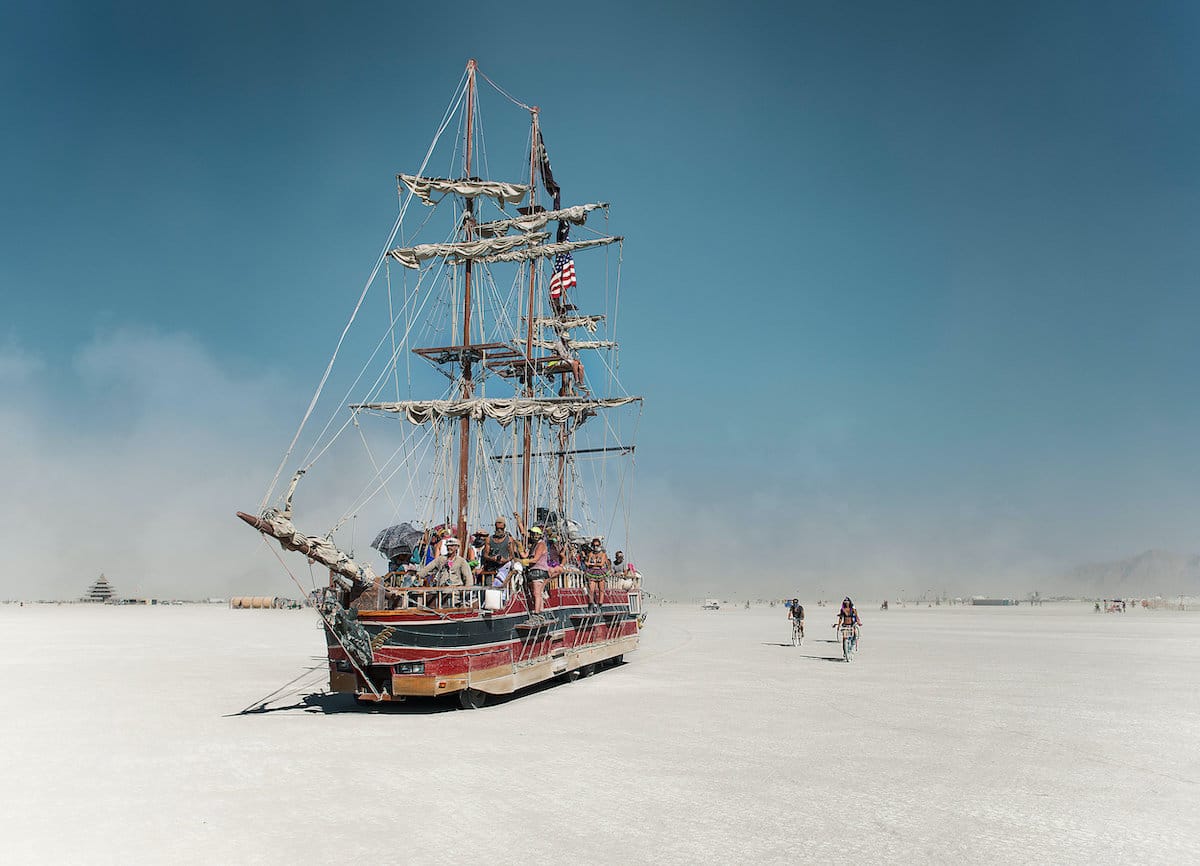 The photographs you took appear otherworldly—as if they’ve come from some fantasy. How did you go about capturing that feeling in one snapshot and transmitting it through the pages of your book?

Most of my photos are directed. The hardest part was to convince the mutant vehicle artists, in such a spontaneous ever-changing location, to take the vehicle to a determined place to take a unique shot. Because only at a specific place and time was it possible to capture the perfect dust cloud, use a flashlight, or catch a particular light. The background is very important. Preferably, the vehicle should stand freely in nowhere. I try to shoot the very moment as I would with an analog camera, so a minimum of post-production is necessary. I usually adjust the sky color and work out details so that the surreal effect is enhanced. 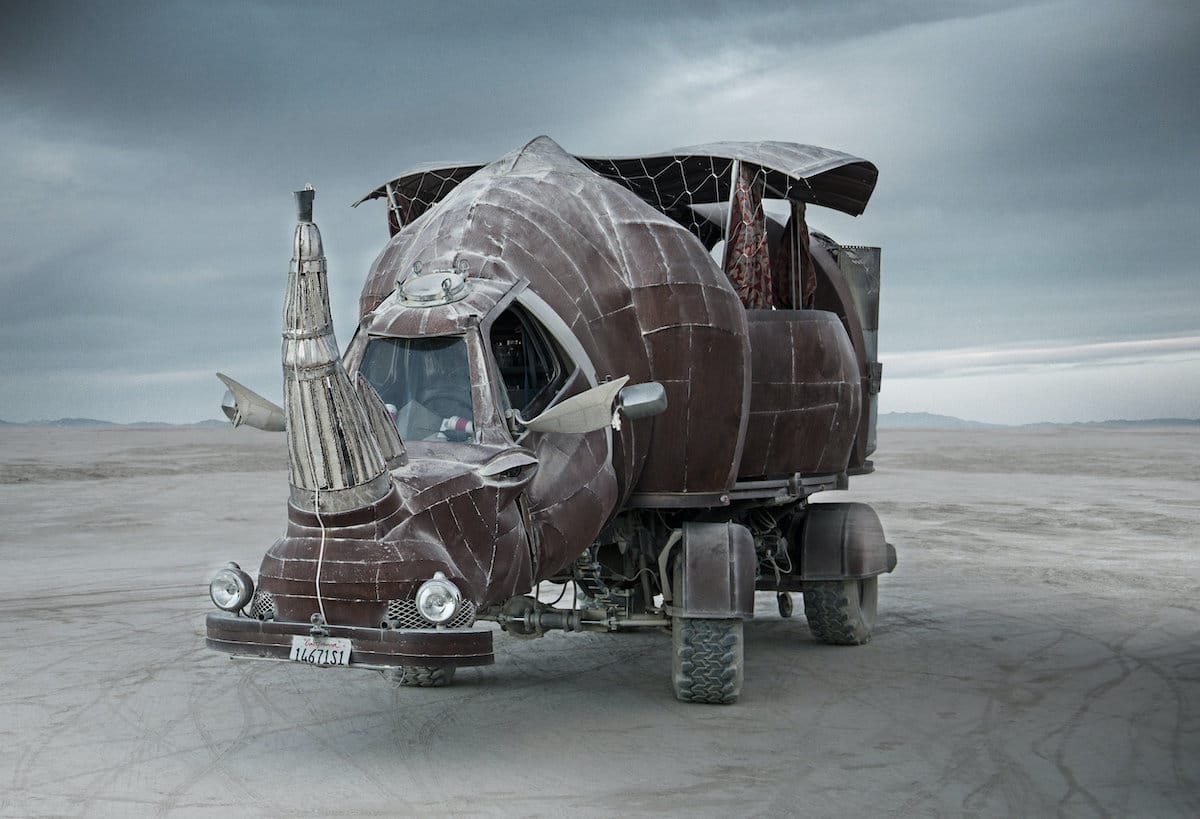 What has been the most surprising, exciting, or fulfilling part of the process for you?

I love gearhead stuff, deserts, Star Wars, and creative festivals. So the combination of these unique vehicles in the dusty desert and the extraordinarily creative people is a nearly perfect setup for me. Shooting each photo, I was totally mesmerized and excited. The environment and the weather in the Black Rock Desert change at every moment. I love it when dust clouds appear out of nowhere and change the image almost surreally. I have had the opportunity to ride along with a lot of mutant vehicles—getting to know the people and the stories behind them, listening to the stories makes my heart soar because there is so much energy and creativity in the artifacts. The quiet, secluded part of the work then happens at my desk. This is quiet, but still exciting because in post-production each photo gets the special touch it deserves. 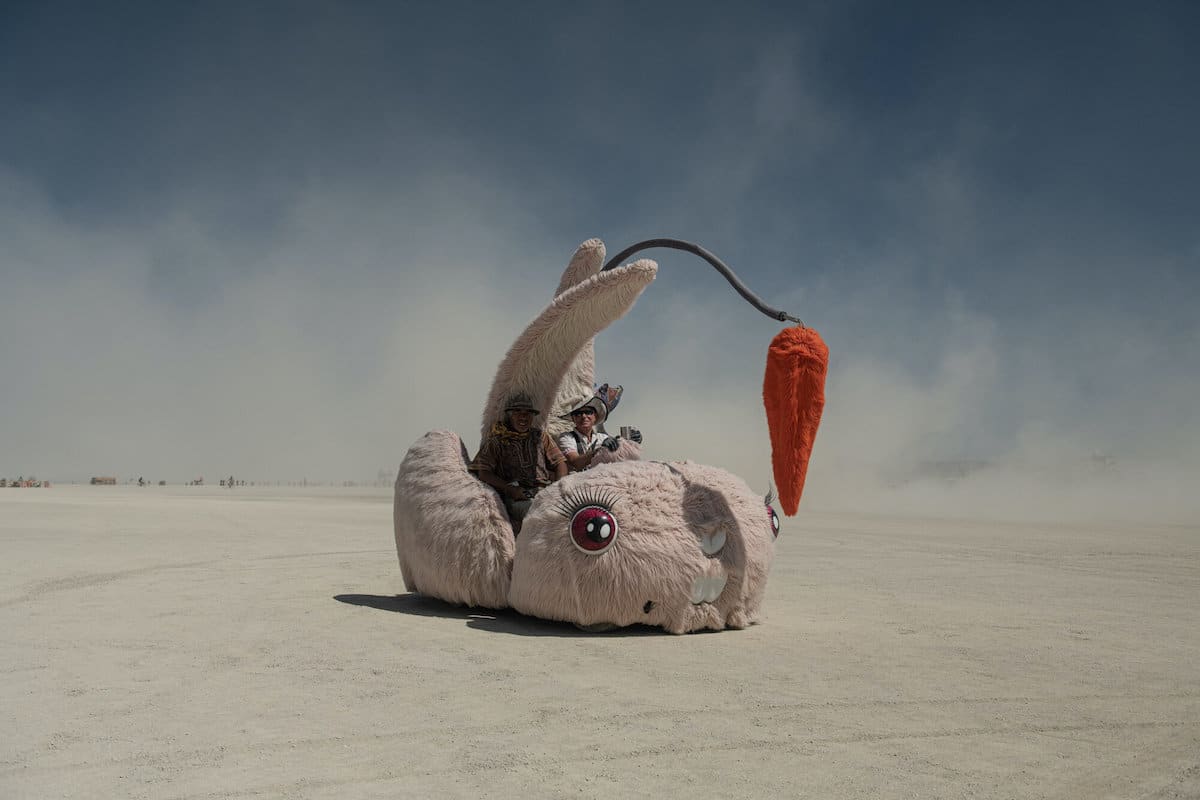 Mutant Vehicles is your third fine art book. How has this project been different than the ones you have completed in the past?

Each book has its own concept. Mutant Vehicles is about interweaving moments in the analog and digital worlds. The images are staged in such a way that they could have been rendered. The book goes beyond a normal fine art book. It is a kind of portal that leads to interactive experiences by using QR codes.

Another difference is that this time I am self-publishing the book. The two previous books were published by publishers. With Mutant Vehicles, the interest of the publishers was also great and definite. However, I desired maximum degrees of freedom in the realization. Therefore, I initiated a Kickstarter project so that people can pre-order the book and many extras. The backers also help decide what will be realized. 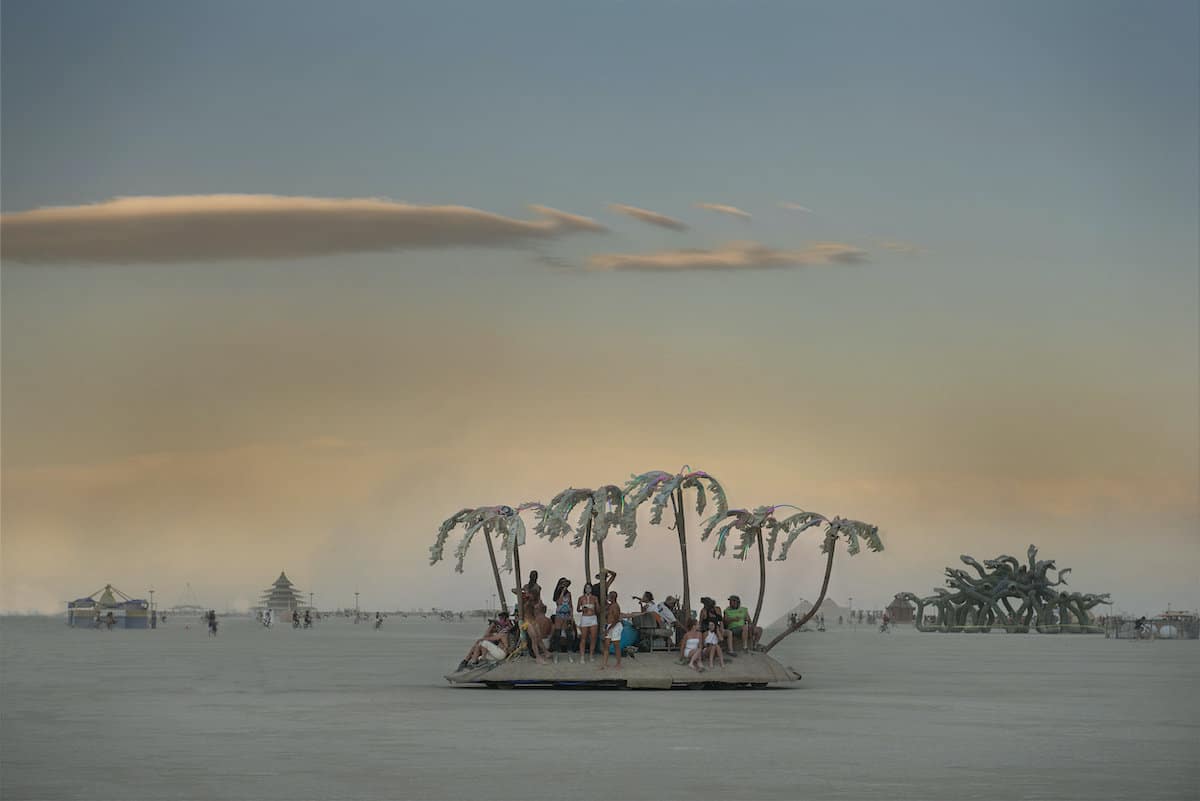 You mention that there will also be an interactive aspect to the book. How will the interactive elements be incorporated?

That is also part of the concept. The book should be more than a normal fine art book. Through interactive elements, the subject of mutant vehicles and Burning Man is to be made experienceable. I know Burning Man can only be truly understood on site. Nevertheless, I want to try to mediate the experience as well as possible. The book will include movies, music, as well as augmented reality features. Using QR codes and links, these will be an integral part of the overall experience. I really hope to kinesthetically transport the viewer into the world of Mutant Vehicles at the festival. A bit of Burning Man goosebumps at the coffee table, so to speak. 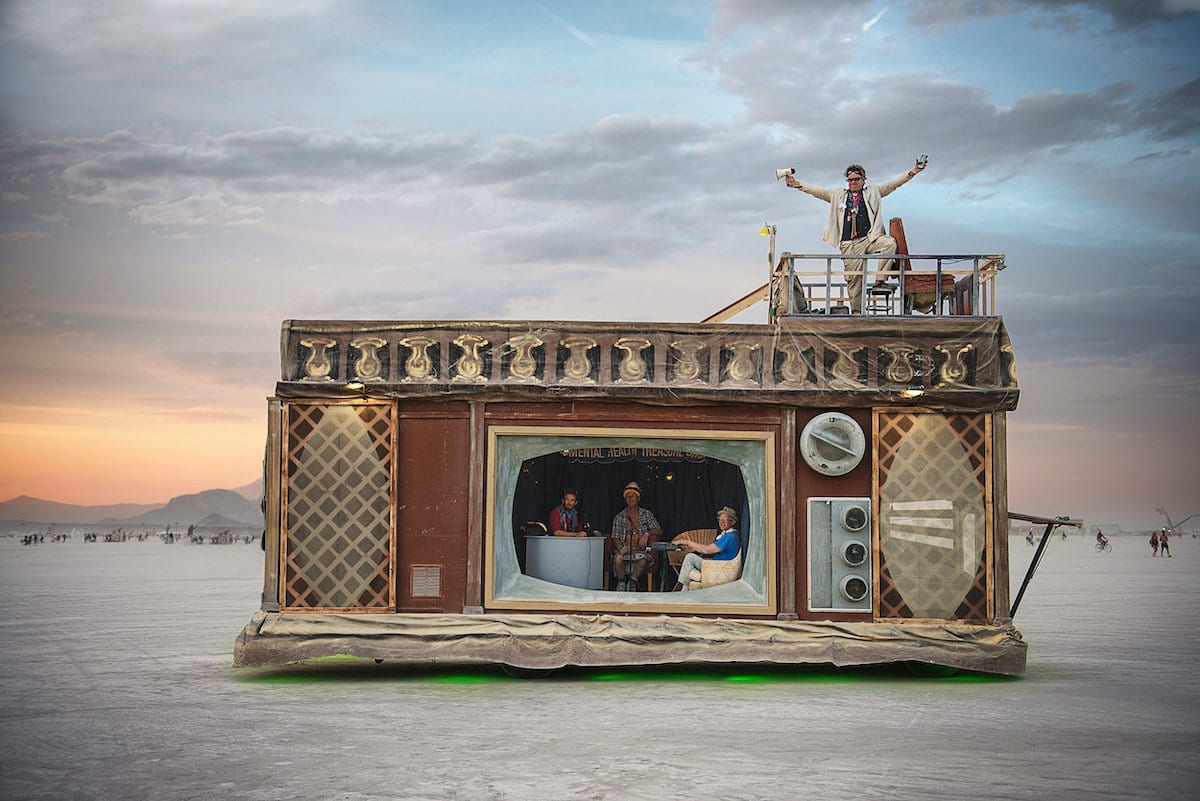 What has been your overall experience with Burning Man and encountering these incredible machines for yourself?

My first Burning Man was mind-blowing. We arrived in the night in a fierce sandstorm. After the tent was set up (with trouble and difficulty), I cycled with a friend from our camp to the playa. There, my chin dropped. We looked into the distance and saw a huge spectacle of moving lights and colors, created mainly by the many bicycles and the mutant vehicles. I can hardly put my excitement into words. I hope to be able to communicate this through my artwork. Burning Man is very unique and special in the world because of the consequent execution of its ten principles. The people are very open, positive, helpful, and giving. Everyone participates in a different, very positive universe for a whole week. 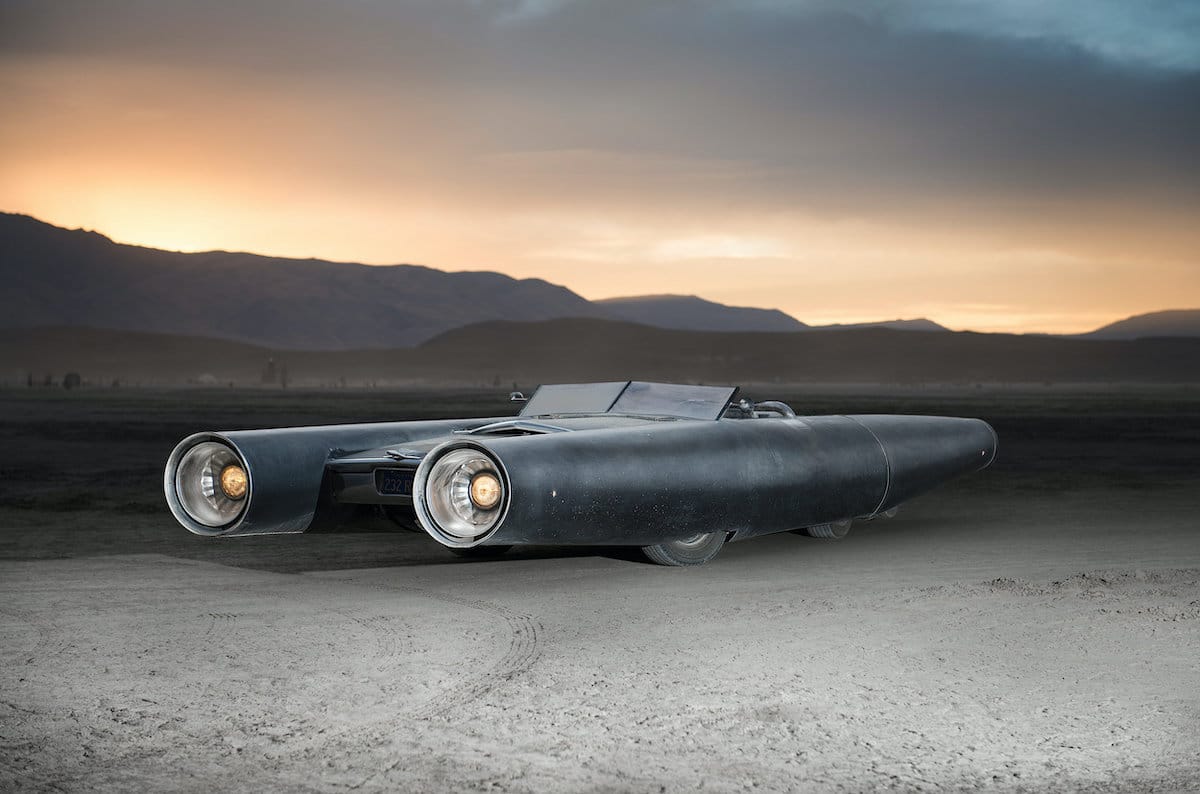 Are there any favorite moments or stories from your shoots or Burning Man encounters that you like to share?

I had not met many people from Burning Man, so I rode around with my bike and camera looking for mutant vehicles. When I saw the Rocket Car, I was immediately hooked. Of course, I immediately tried to find the owner to ask him if we could take some photos together. Someone told me that the owner's name was David and I’d better not disturb him. I thought, “So what?” and went to see him anyway. I met a super nice man with white hair and a white beard, and I told him about my book project and that I had already published a book that I would like to show him.

When I showed him The World's Fastest Place, he was as excited about it as I was about his Rocket Car. It turned out that he is a big land speed racing fan too. Thus, we were talking shop for quite a while on this subject. Then we drove out to the playa to take some pictures. Only later did I realize that this David was David Best, THE highly honored Temple Builder—the most profound piece of art at the festival. He’s a great artist that I probably would never have approached so easily if I had known who he was. Now, David is, in fact, writing the foreword for Mutant Vehicles. I'm very grateful for that because I really appreciate him and his art. 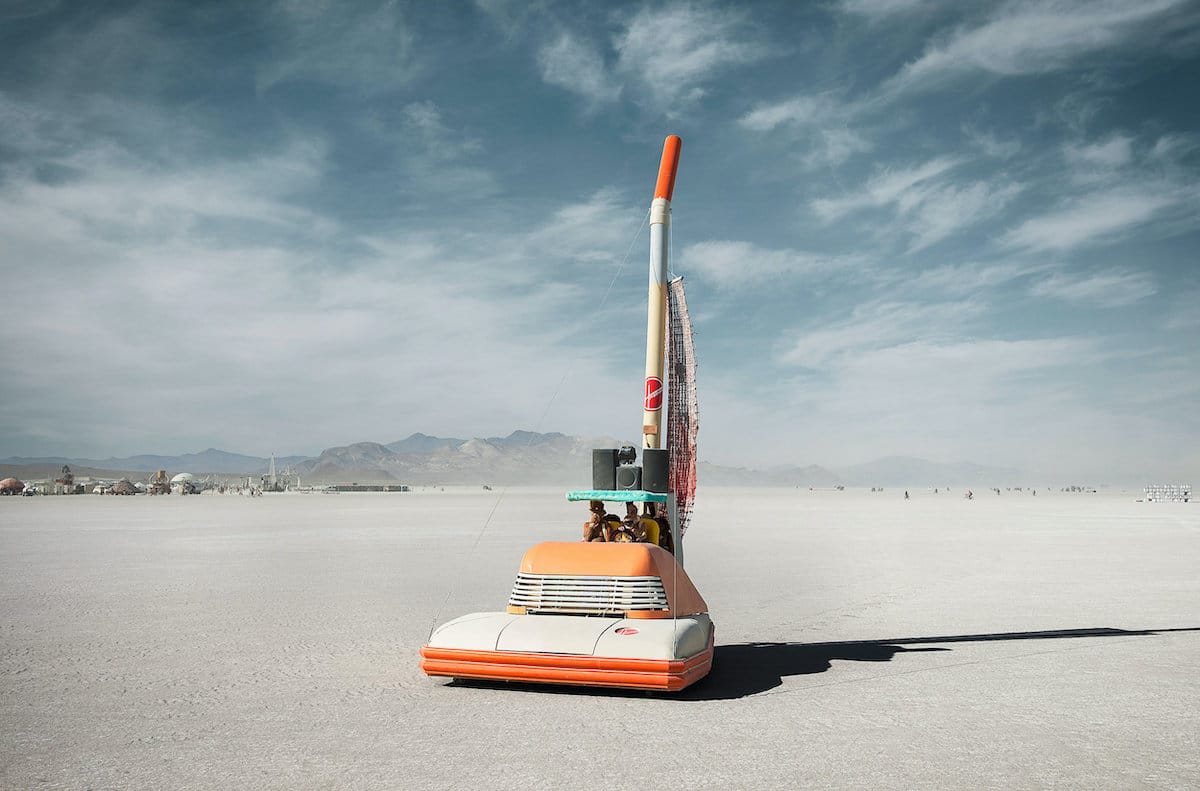 What is the experience that you hope readers take away from Mutant Vehicles?

Inspiration, openness, and community. The book is intended to transmit aspects of the ten principles of Burning Man. The mutant vehicles are a gift from the artists to the Burners as well. They design and build these outrageous driving artworks to ride on, have fun on, and experience the gigantic artworks on the playa. So it is a ride on art to experience art. This book is my homage to these great artists. I hope that readers will appreciate this art form through the book and the stories provided.

Anything else you would like us to know about your work?

Storytelling is what my photography projects are all about. I always start with a concept. It's not about just taking a nice picture, it's about an idea, the narrative, the statement, the feeling. I always try to create a world that the viewer can fully immerse themselves in. I have also started to develop a concept to make my art experienceable as NFT, you can find my first attempts here. 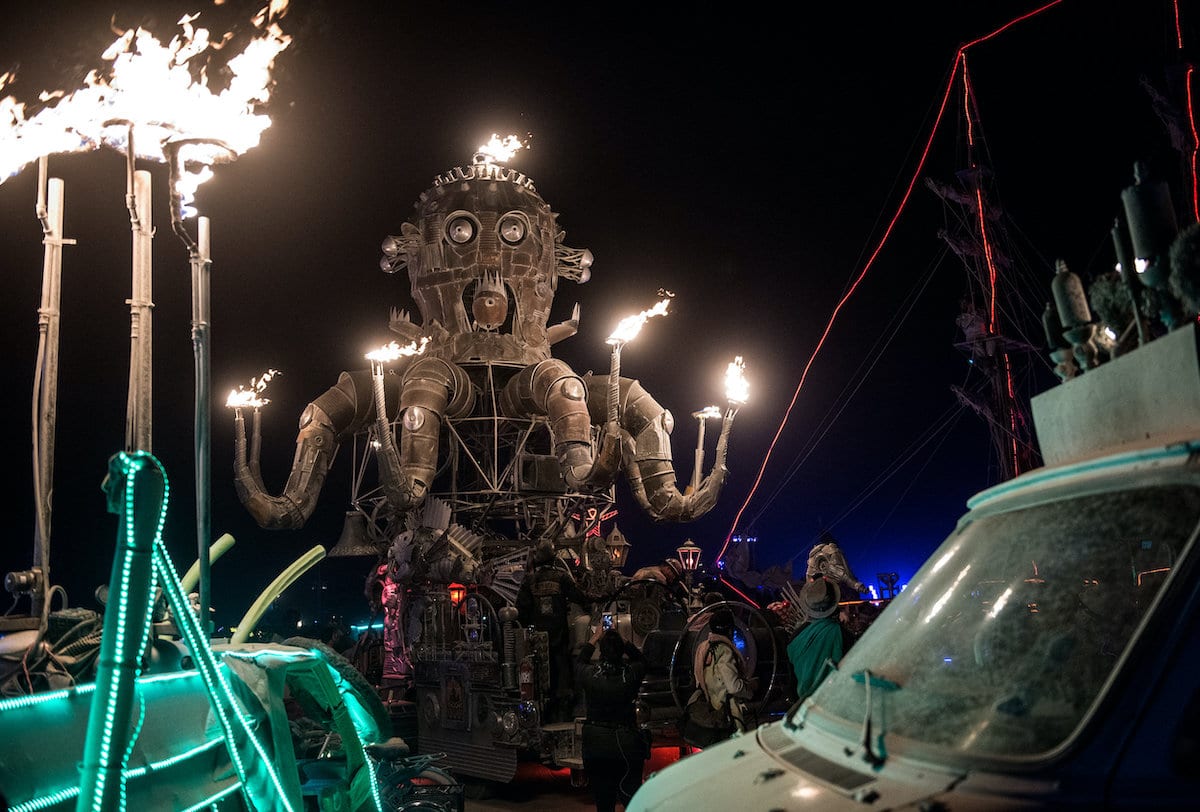 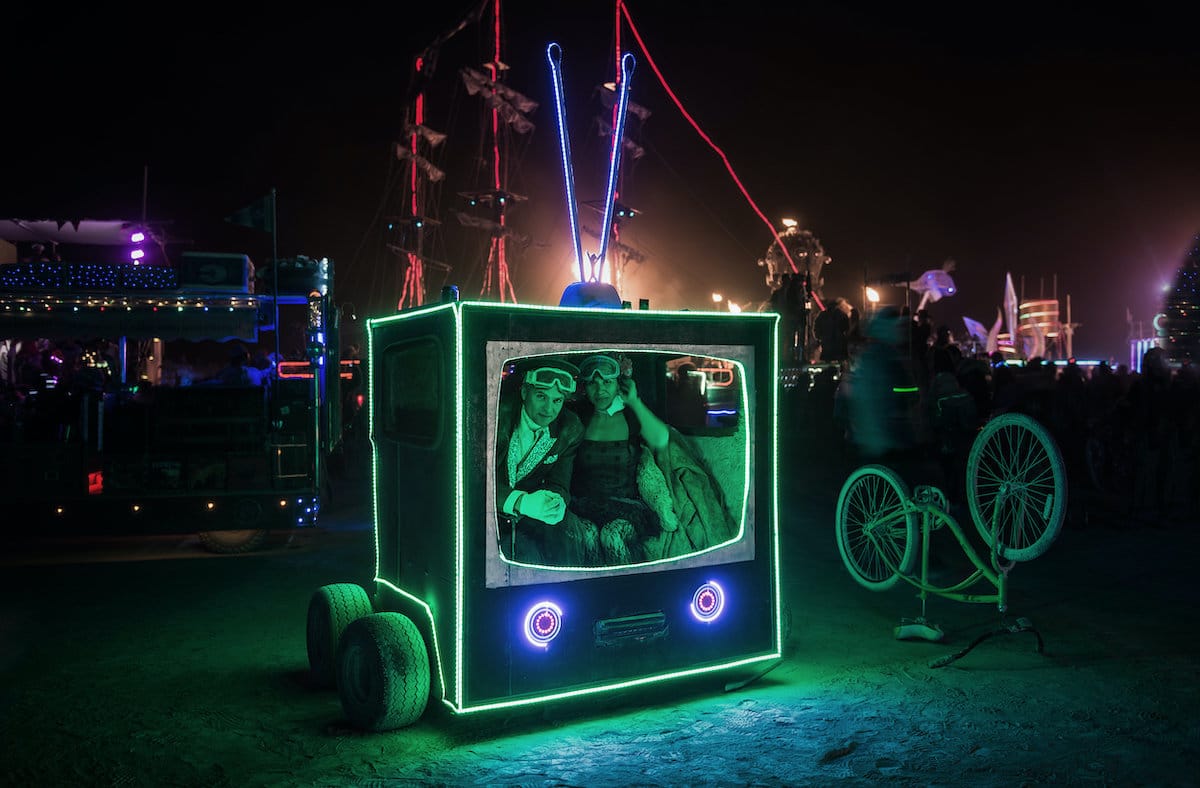 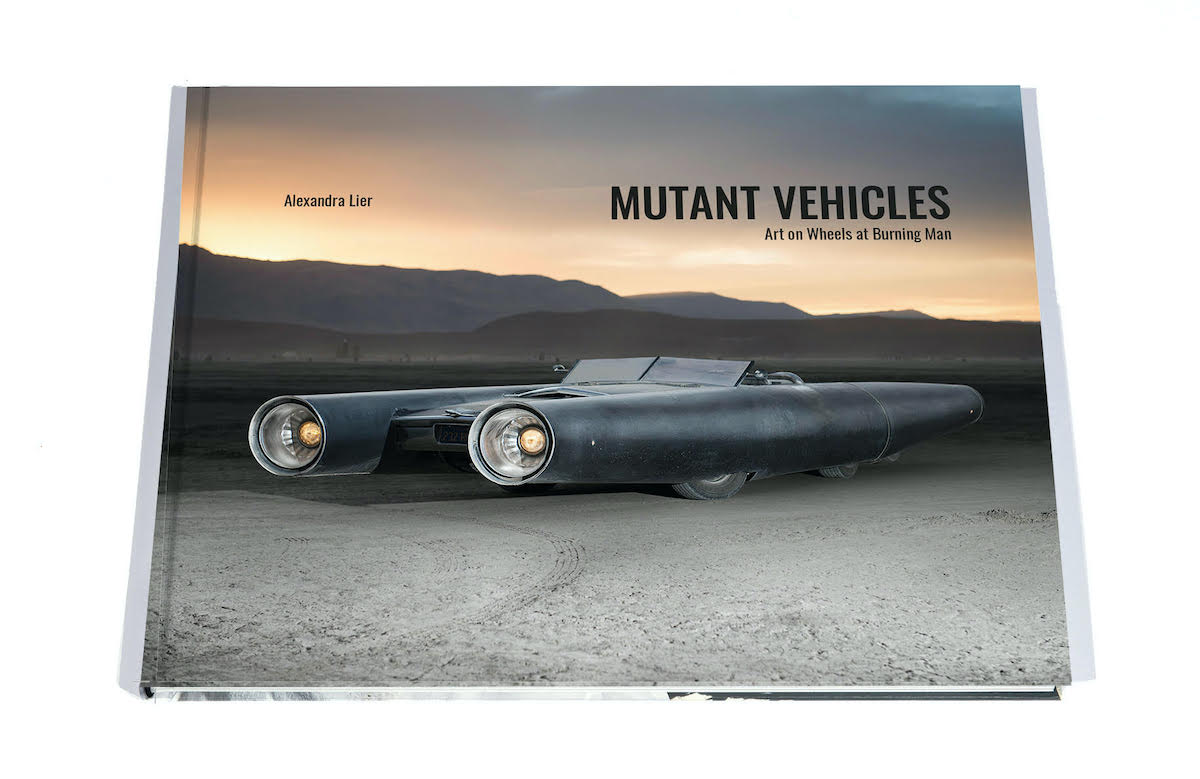 Love these mutant vehicles? Share
Like My Modern Met on Facebook
Get Our Weekly Newsletter
Become a
My Modern Met Member
As a member, you'll join us in our effort to support the arts.
Become a Member
Explore member benefits 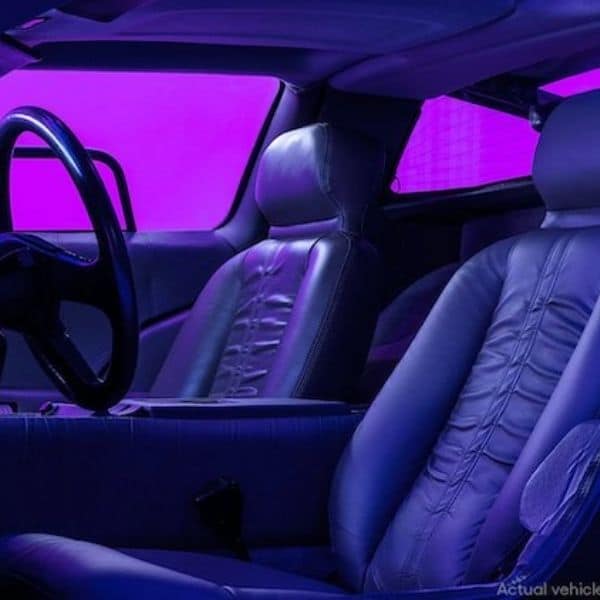