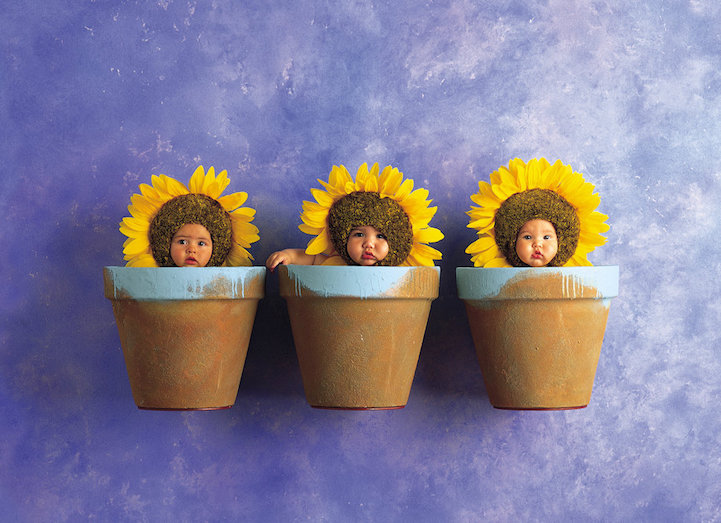 Photographer Anne Geddes has made a name for herself with her iconic baby photography. Her simple, yet creative portraits of newborn babies have decorated calendars, greeting cards, and desktop wallpapers for over 30 years. Thousands of babies have come through her studio to be dressed up as butterflies, sunflowers, and other seasonal costumes. Although she has made a living out of photographing babies, she continues to treat each portrait as an individual discovery. “I’ve never lost that fascination and awe at the sight of a newborn,” Geddes muses in an interview with the Huffington Post. “At the very beginning of our lives, there is so much potential, so much purity.” As we grow older, she wants us to remember these moments, when life was so open and full of possibilities. “How wonderful is it going to be for this child to see in such wonderful detail their newborn selves, at the very beginning of their lives?”

In fact, Geddes' newest series of photos has sought out this feeling of remembrance. This new series she's dubbed Baby, Look At You Now! juxtaposes Geddes' iconic baby portraits from the 90's with her subjects all grown up. Through this project, Geddes has had the chance to reconnect with the babies who helped form her career and gush over how proud she is of all their recent successes. The photos of Baby, Look At You Now! are uploaded weekly on Instagram, along with Geddes' heartfelt and sometimes comedic captions. Geddes invites anyone who she took a photo of as a 1990s baby to take part by writing to her at [email protected] Send a recent photo of yourself and a short update on what you're up to today, and you could be the next addition to the series!

Take a look at some of the babies from the photo series who have grown up into lovely young adults, and read what Anne Geddes herself has to say about them. 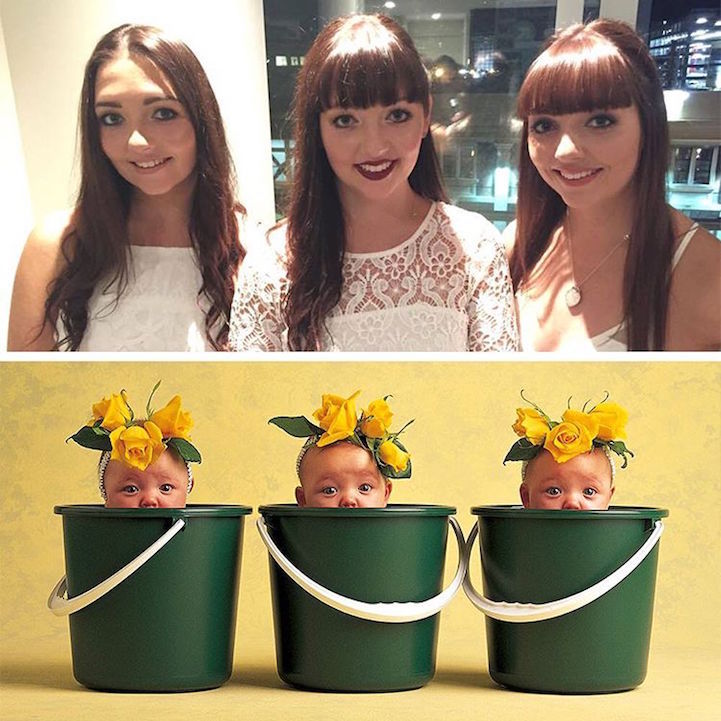 “Way back in 1994 I photographed Alesha, Chantelle and Kailee, tiny identical triplets, each sitting in a green bucket. I called the image ‘Pool Party.' A lot of people probably thought I'd photographed the same baby 3 times! And I couldn't blame them for thinking that because they also had pretty much identical expressions… Here are the girls today – beautiful 22 year olds! And I notice they all still have those similar expressions. They have all just completed Commerce degrees at Victoria University in Wellington, New Zealand (with differing majors – Marketing, HR and Management) and have headed off to Florida to work at Walt Disney World on a Cultural Exchange. Good for you girls and I hope you're loving your summer experience!” 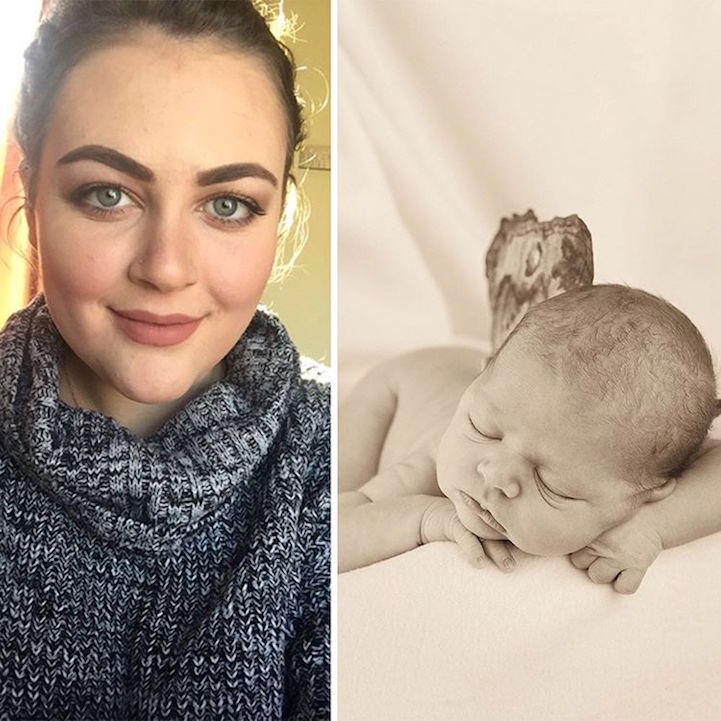 “Taken in 1997, tiny Aimee was just 7 days old. What I love is the absolute simplicity and the delicate detail of Aimee's brand-new baby hair. She was photographed lying on the lap of my then Studio Manager, Natalie, who happened to have a big wet patch on her jeans underneath the white cloth! Oops sorry “grown up Aimee” – that may have been too much information. Fast forward 19 years and here she is today! Besides lots of traveling, Aimee is currently working in New Zealand as a caregiver in a retirement home, which she absolutely loves. She's studying for a career in nursing and is especially thinking about working in pediatrics. YES! This is exactly what I would be doing if I hadn't been a photographer! Aimee I hope I've played some small part in that career choice and best of luck for your future. I'm very proud of you.” 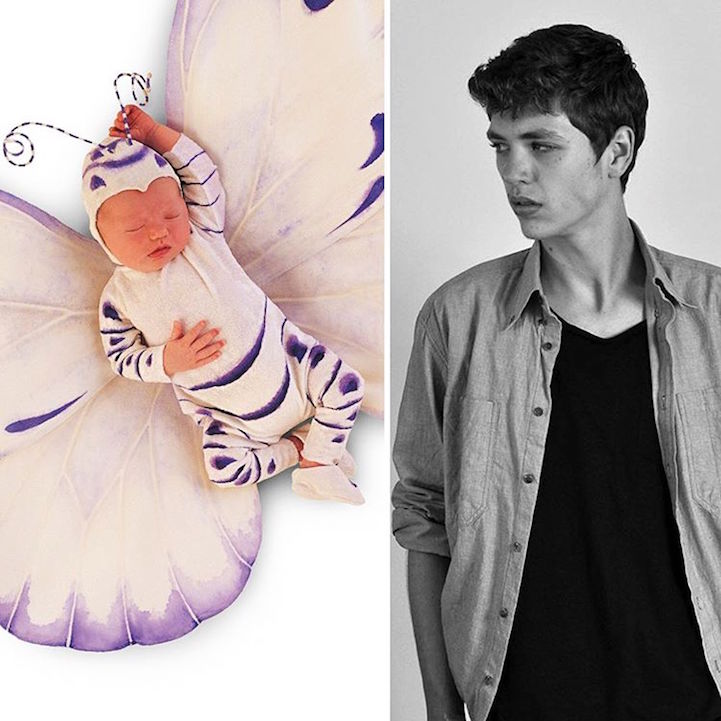 “Small is beautiful … well at least that was the case back in 1997, when I photographed tiny newborn Zac for my butterfly series, which appeared in the 1998 calendar. And here's Zac today, still beautiful (oops sorry Zac – I meant handsome!) but a lot bigger … he's topped out at 6ft 5 inches! I'm loving this series because I'm constantly amazed to see “my babies” as they are today! From Zac's mother Audrey … “I remember him being the only 2 week old at the shoot whose outfit was a little short in the legs! Lol. And the arm raised over his head wasn't staged – he posed all by himself! I also learned the BEST method for getting a baby to sleep!” Well we have a few tried and true methods Audrey – after 30 years I think I have quite a few techniques up my sleeve! Zac now lives in Melbourne, Australia and works front-of-house in the same restaurant where his sister Jaime is an Event Coordinator. He's also done some modeling (his photo credit RPD Models). Many of you will have seen my plush toys over the years, and one was based on Zac's butterfly image. Audrey told me Zac likes to say he has his own “action figure” which I think is hilarious!” 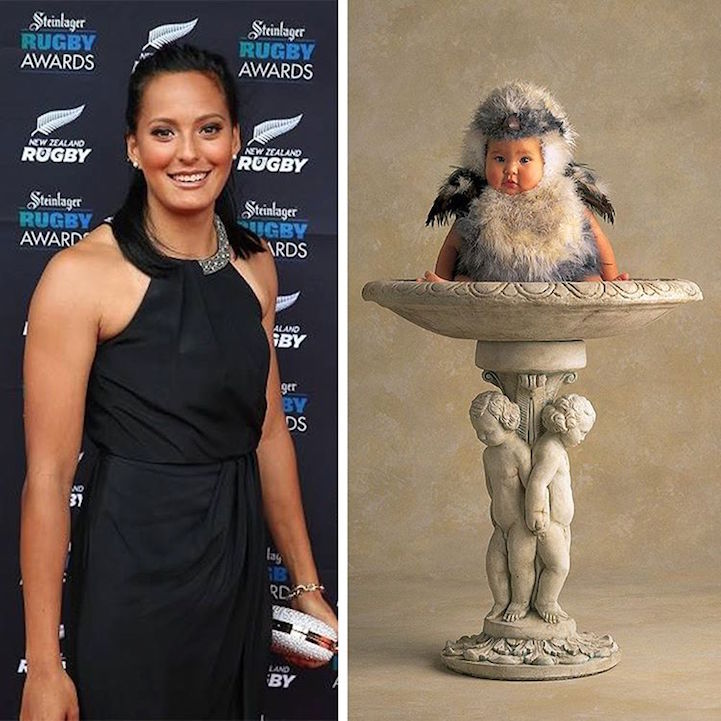 “Well good grief – my little “Wet Sparrow” has well and truly flown the nest (or the bird bath to be more precise!) I'm sure many of you remember my first coffee table book “Down in the Garden” (around here we just call it DIG) in which this image of little Tyla featured. I remember the day of this shoot very clearly – how cute the chubby little 6 month old looked in her gorgeous costume. 22 years later and here's Tyla today – and I was thrilled to hear what she's been up to … plenty it seems! In Tyla's words “I have recently been named in the first ever Rugby Sevens Team to represent New Zealand at the Olympic Games in Rio – something that I am extremely honored and privileged to be a part of. Not only do I get to compete on the world's greatest sporting stage, but I get to do so representing myself, my family and my country”. Go Tyla!!!! I can't wait for the Olympic Games and the Paralympic Games to begin because I've met so many incredible athletes from around the world over the past few years and I'm ready to cheer them on!” 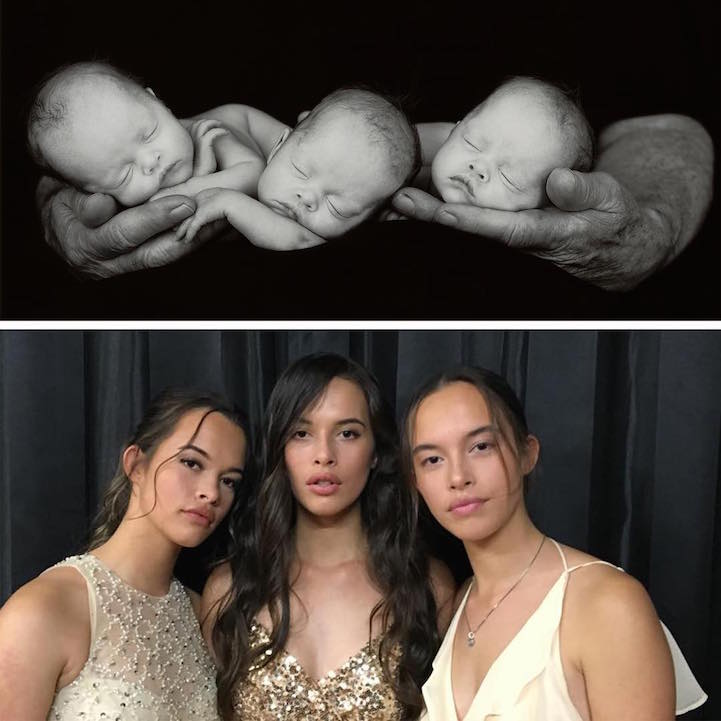 “I remember the day 17 years ago when I photographed 3 super tiny identical triplets, Jaclyn, Susanna and Charlee, cradled in the large, craggy and very gentle hands of a gentleman called Jack. Their mother Lisa brought them to the shoot in 3 baby capsules which were all lined up in my studio reception when I went to greet them. Inside were what looked to be 3 sweet little dolls, fast asleep, all wearing identical woolen hats. I don't generally like to play favorites, but this image is certainly one of mine. I always know an image is going to be magical when my hands start shaking as I'm trying to focus … and it's no mean feat to get 3 babies asleep at the same time (Lisa would definitely vouch for that). I have video of this shoot stored away somewhere so I'll try to find it and do a later post for everyone to see. But look at the girls today – 17 years old and 5'10” – the same height as me by the way! This image was taken the night of their school prom/ball. The girls are all signed with a modeling agency in New Zealand and getting quite a bit of work, which is great news. Susanna (left) is also really interested in photography and make-up artistry. I'm very proud of you girls!” 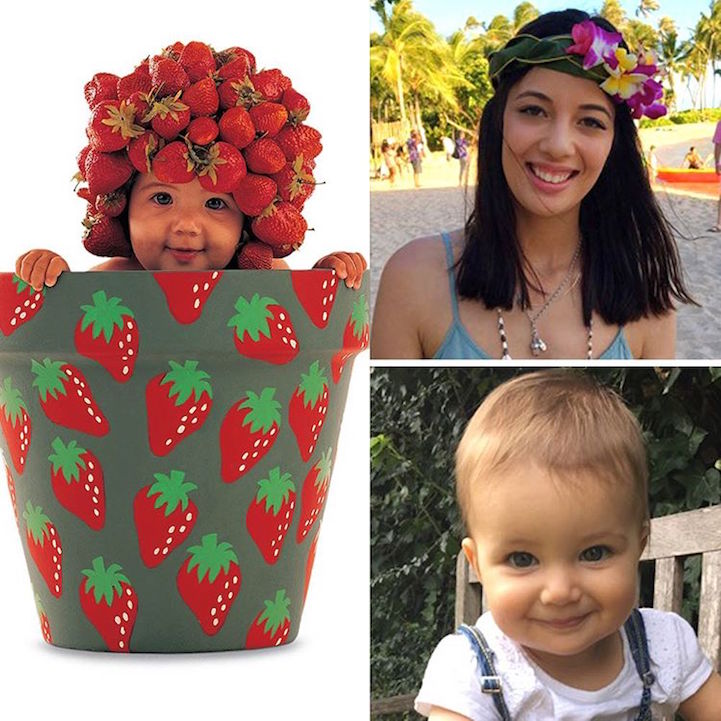 “… one of my early flower pot babies, Emma, and she has a little daughter of her own who we think looks exactly like Emma did 21 years ago! Here's Emma's message to me … “Hi Anne, I was one of your flower pot babies from “Down in the Garden” and I thought I'd let you know what I'm up to. I'm 21 years old and a very proud mother to my 15 month old daughter Aaliyah, who is trying to help me type this message. I remember that when Aaliyah was a week old, I looked you up to see if it would be possible for you to photograph her! Who knows, maybe one day we will get that opportunity! I currently live in Hamilton (New Zealand) with my partner, daughter and my partner's parents. My life at the moment is pretty full on as I'm studying for a Bachelor of Teaching (Primary) at The University of Waikato and working part time as a swimming instructor. My grandparents still buy the Anne Geddes calendars that have my strawberry pot image in them. Over the years they've collected strawberry pot puzzles and cards too. I hope you enjoy the photos of Aaliyah and I, kind regards, Emma”. Wow – how gorgeous that one of my early babies now has a baby herself! Well done Emma, Aaliyah is too cute! Love to you both, and best of luck with your studies.”

All images via Anne Geddes.