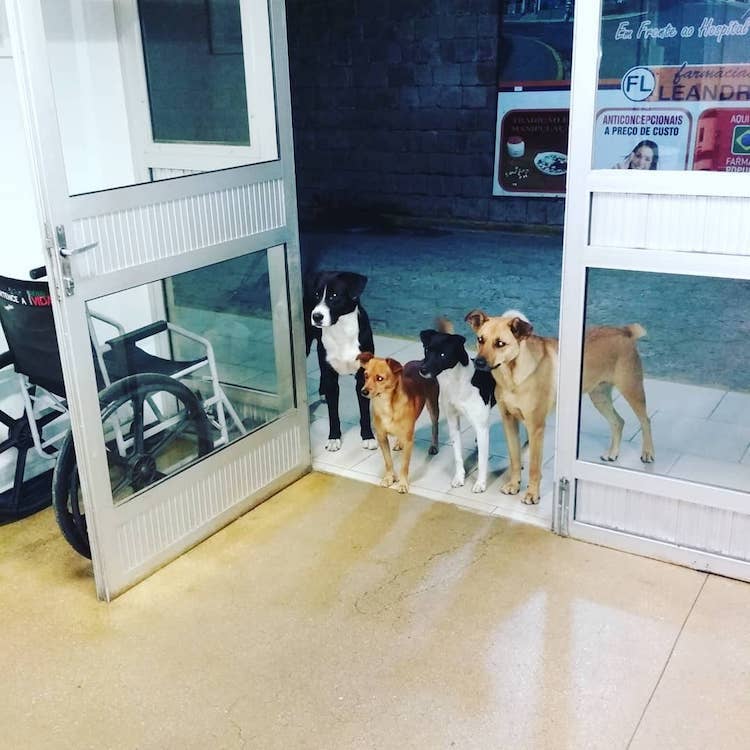 Everyone knows that dog is man's best friend. However, one pack of pups in south Brazil took their loyalty to the next level when they followed their pack leader—a homeless man—all the way to hospital.

This unlikely union formed while both the man, identified only as César, and the group of dogs were living on the streets of Rio do Sul. Often sacrificing his own food for his animal friends, César attracted a large following of strays. While one may think that these dogs would only stick around when scraps of food were involved, a poignant photo has proven otherwise.

Late one night, César arrived at the emergency room of the Regional Alto Vale Hospital in Rio do Sul. While he was being treated, a nurse named Cris Mamprim spotted a peculiar sight: four dogs patiently waiting at the building's entrance. When she found out that these dogs were César's companions, she was so moved that she snapped a photo and shared it on Facebook, where it went viral.

In addition to shedding some light on César's story, Mamprim used the opportunity to remind readers not to judge others—especially those who have fallen on hard times. “A simple person, without luxury, who depends on the help to win hunger, cold, pain, wickedness of the world, has by his side the best companions, and the exchange is reciprocal,” she wrote. “I don't know how his life is, why he's on the street, and I don't even want to know and judge him, but I admire the respect and love he has for his pets. Seeing them like this, waiting at the door, just shows how well cared and loved they are.”

Fortunately, the dogs did not have to wait a long time; César was in and out in an hour, at which point he was met with four wildly wagging tails.

All images via Cris Mamprim.

Touching Portraits of Homeless People and Their Dog Companions