I just realized I never saw a photo of a female muscle system. This is NOT what I imagined milk ducts to look like. pic.twitter.com/GBK6trgXF8

A photo of female milk ducts has recently gone viral online and it has the whole internet talking. After Twitter user @lemonadead tweeted an illustration of female human anatomy, people were astounded by the petal-like muscles that were said to be milk glands and ducts. The shared sense of surprise amongst netizens had everyone asking Is that really what the anatomy of a breast looks like?

The image is a screenshot from an iPad app that, according to ScienceAlert, has been circulating since 2016. While some people have been completely shocked by the image, there's actually a lot more to the anatomy of a breast. For one, breasts are not made of muscle, but tissue, glands, and ducts. The neatly arranged “petals” in the illustration are lobules, glands that produce milk. These lobules connect to the nipple via ducts so that milk can pass through. However, the lobules aren't actually arranged in such a symmetrical formation. They are typically more scattered throughout the breast tissue, rather than seeming like a cluster of flower petals strapped onto the chest.

Regardless of its accuracy, the image has sparked a discussion online about what we're typically taught in school. Many have pointed out that they were used to learning anatomy through illustrations of men, and therefore had never seen female breast anatomy. Others, most often women who had breastfed or were currently breastfeeding, were moved to see the science behind this bonding moment between mother and child.

There were a wide variety of reactions to the viral photo of female breast anatomy, from shock to awe.

It sort of looks like…flesh flowers? Terrifying but also kind of beautiful?

At first I thought someone put flowers over boobs because art. Now, it looks like a weird alien creature lives inside my body and I'm terrified.

It’s beautiful to me- I breastfed my kids and wow! Those things nourished my babies.

Some also commented on the fact that male anatomy is often what's taught in school.

Maybe it’s only freaking people out because it’s not normalized because of the patriarchy showing us a man’s biology in class.

However, the illustration isn't entirely accurate. The lobules inside a woman's breast are typically more scattered. 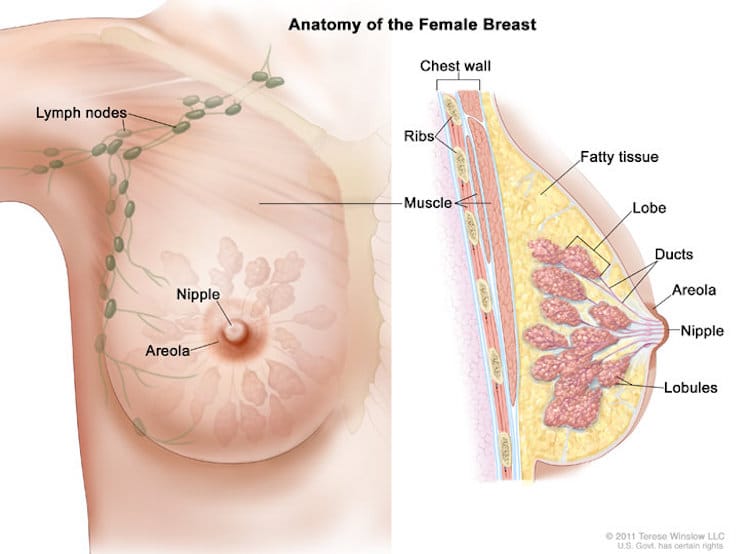 Learn more about the anatomy of the female breast and how milk is produced.