Off the heels of the first-ever photo of a black hole, NASA has just released incredible new visualizations that are a mesmerizing look at how a black hole's gravity distorts our view. Across several different perspectives, the visualizations demonstrate how what we consider to be a dark space is actually one of the brightest places in the universe. The GIFs and videos were created by Jeremy Schnittman using custom software from NASA's Goddard Space Flight Center and were released in conjunction with Black Hole Week.

So what are we looking at? The visualization shows multiple views of the accretion disk, which is created by matter spiraling toward the black hole. The accretion disk slowly rotates, with gravity warping our view. It's almost as if a funhouse mirror has been aimed at the black hole, causing areas of the disk to bend.

The streaks of light that swirl around are caused by gas in the accretion disk. Thanks to a phenomenon known as doppler beaming, the light appears brighter on the left side of the disk, as that's the matter moving toward us. On the right side, the matter moving away from us is slightly dimmer. The gases also take on different shades depending on how quickly they are rotating. For instance, the gas nearest to the black hole travels at nearly the speed of light, while the outer sections move more slowly. This accounts for the streaks and dark lanes in the accretion disk.

“Simulations and movies like these really help us visualize what Einstein meant when he said that gravity warps the fabric of space and time,” shares Schnittman. “Until very recently, these visualizations were limited to our imagination and computer programs. I never thought that it would be possible to see a real black hole.”

Multiple views of a black hole in rotation give an exciting look at what these mysterious entities look like. 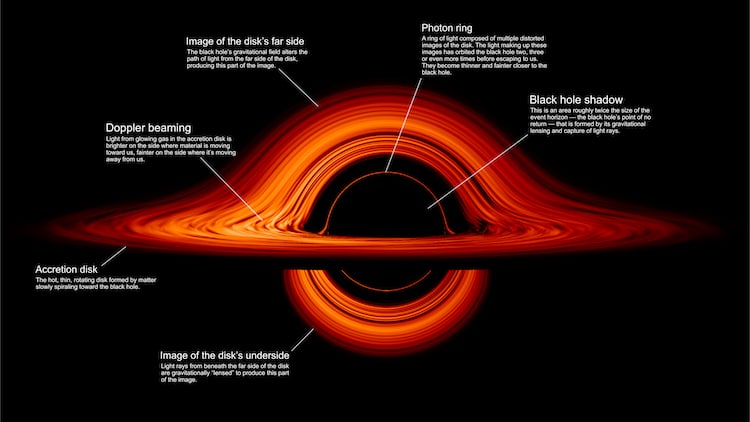