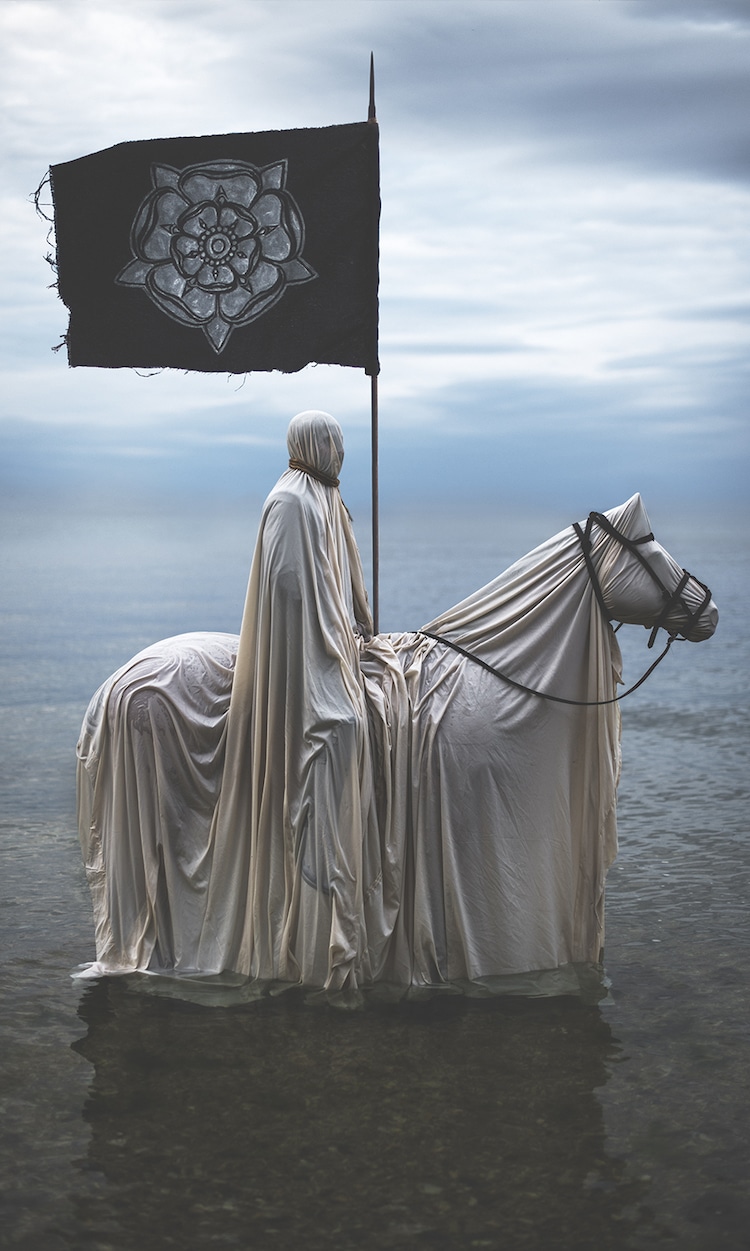 Death
This post may contain affiliate links. If you make a purchase, My Modern Met may earn an affiliate commission. Please read our disclosure for more info.

Like many people, photographer Nicolas Bruno is enthralled by tarot cards. Having interacted with the mysterious cards at a young age, the deck of divination continued to pique his interest into adulthood. Now, Bruno’s latest series, titled The Somnia Tarot, depicts the entire 78-card deck and considers the symbology behind the alluring images that are often used to predict the future.

Bruno began his tarot card photography by referring to his portfolio of surreal imagery. His previous work dealt with his experience with sleep paralysis as well as dream journals that have ultimately cultivated a visual language detailing his complicated relationship with a good night's rest. This conceptual approach to his photographs allowed for an easy transition into recreating the classic Rider Waite tarot deck. “Because my Sleep Paralysis series and the classic tarot deal with the subconscious and conscious mind,” he tells My Modern Met, “creating fluid parallels between the two bodies of work was a seamless process.”

The Somnia Tarot is now on display at the Haven Gallery in Northport, New York, until March 21, 2021. In addition to the exhibition, Bruno has fashioned his photographs into his own deck of cards that will be available for pre-order soon.

We spoke more with Bruno about this series–including the logistics of creating it entirely during the coronavirus. Scroll down for our exclusive interview. 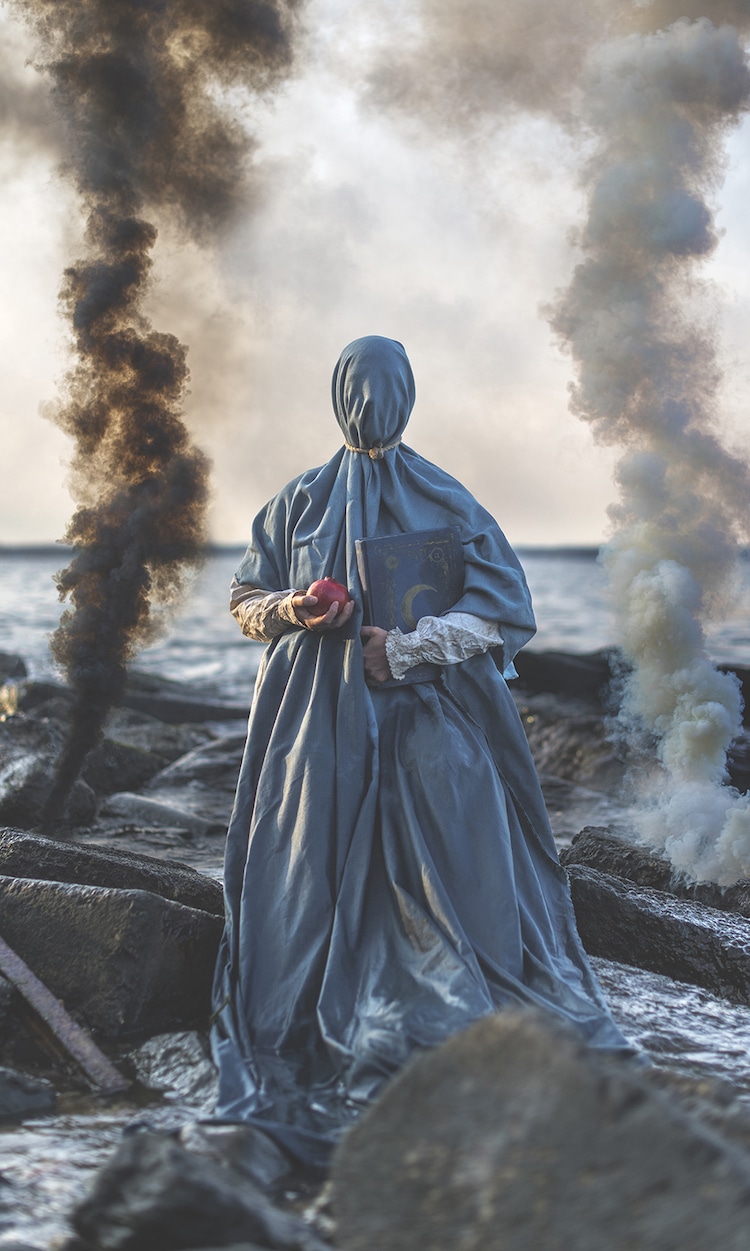 What was the inspiration for this project?

My mission for The Somnia Tarot was to reinterpret the entirety of the classic Rider Waite tarot deck through conceptual photography, sculpture, and costume design. Through consultation of my dream journals, I developed my own take on the meanings behind each card while remaining true to the intentions behind the classic tarot. From basic sketch to final photograph, I poured all of my creative energy into this project over the past year. To my knowledge, this is one of the first representations of the entire tarot through conceptual photography.

Where did your interest in tarot cards come from?

When I was a child, I would often visit my grandmother’s house and play with all of the interesting antique model trains in her basement. The basement had a storage room, and I stumbled across my great-grandmother’s tarot deck. I would always enjoy looking at the cards until one day my grandmother caught me with them and hid them high up on the storage room shelf.

This was my first interaction with tarot cards, and that memory of the mysterious cards stuck with me to this day. During high school and college, I was exposed to the tarot again through my friends. I loved the style of imagery that it portrayed. I had often thought of recreating one or two cards in my own style, but it wasn’t until quarantine that I saw a grand opportunity to create the entire series. 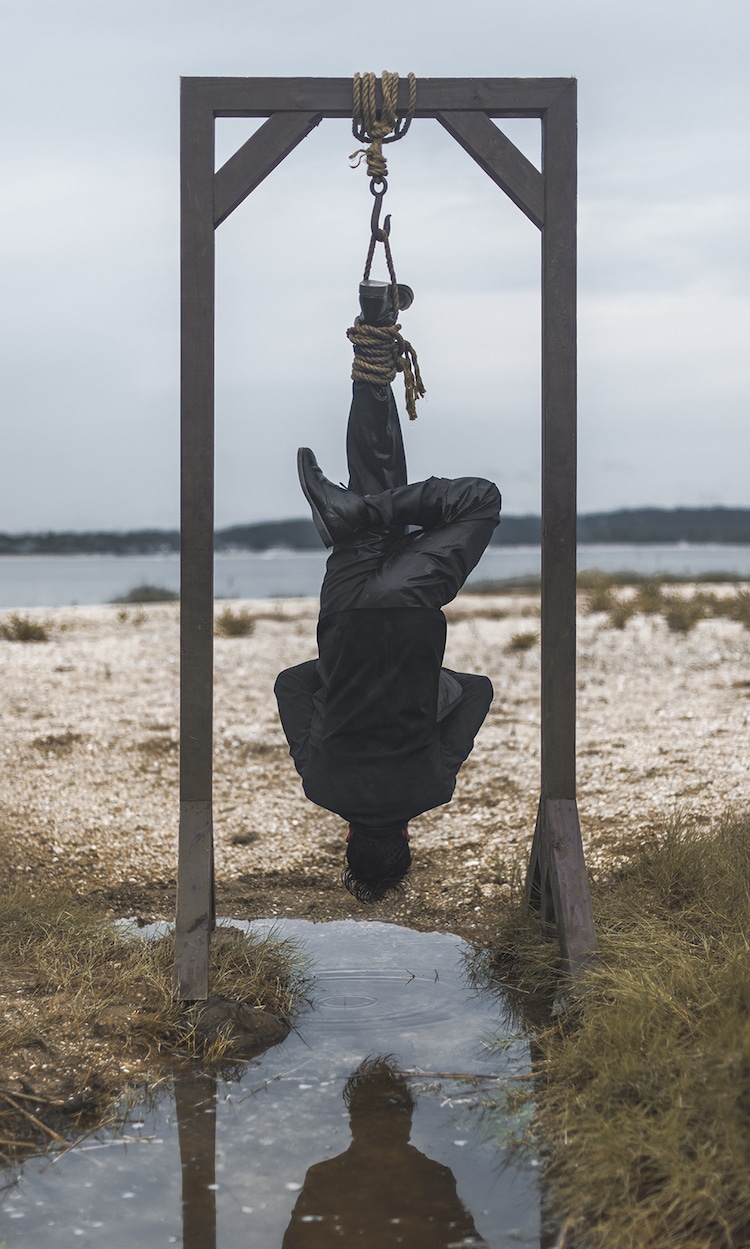 How would you say the coronavirus quarantine informed your photography?

When quarantine began, the majority of art world business came to a grinding halt. The future was uncertain for everyone, and I spent the first few weeks pondering the possibilities of what could happen in a few month's time. I knew that I needed to continue creating in order to keep my spirits up. There was no better time to challenge myself and make the best use of time while the world was on pause.

Every day, I woke up and put 100% of my efforts into developing this series. This project forced me to work faster than I normally do, but giving myself this challenge opened my mind to things that I never thought I could do. I developed an efficient system of creating props and costumes at the beginning of the week and then shooting multiple images at the end of the week. This allowed me to be consistent, creating more efficiently, and completing the final image on the perfect timeline for an exhibition. 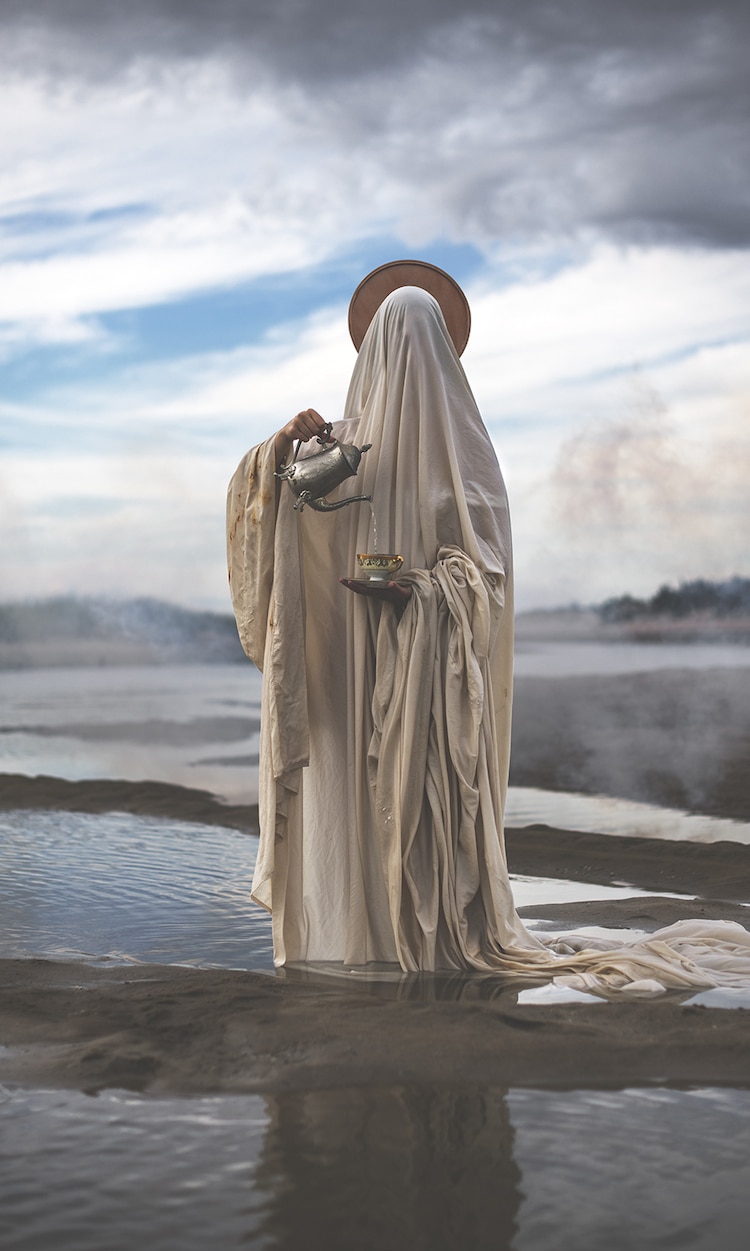 This is an ambitious project with 78 images. Logistically, how did you produce this series?

I spent an entire month studying the tarot meanings and the Jungian psychology analysis of each card. During the research, I kept a huge sketchpad and began drawing out concepts for each piece. I consulted my dream journal to tell the stories of each image through the characters that I see within my sleep paralysis experiences.

After I completed my final sketches for each piece, I began creating props and costumes. I planned each shoot day to include up to three images. Even if one of the concepts failed, I would still have images to come home with. All of the male characters in the series are self-portraits, and the female characters are either my sister, girlfriend, or a close friend. Limiting the models to myself and close individuals made the project efficient and COVID-safe.

How long did it take overall?

My planning and scheduling allowed me to finish the final image in early December 2020. This was the largest and most challenging project that I have ever taken on. 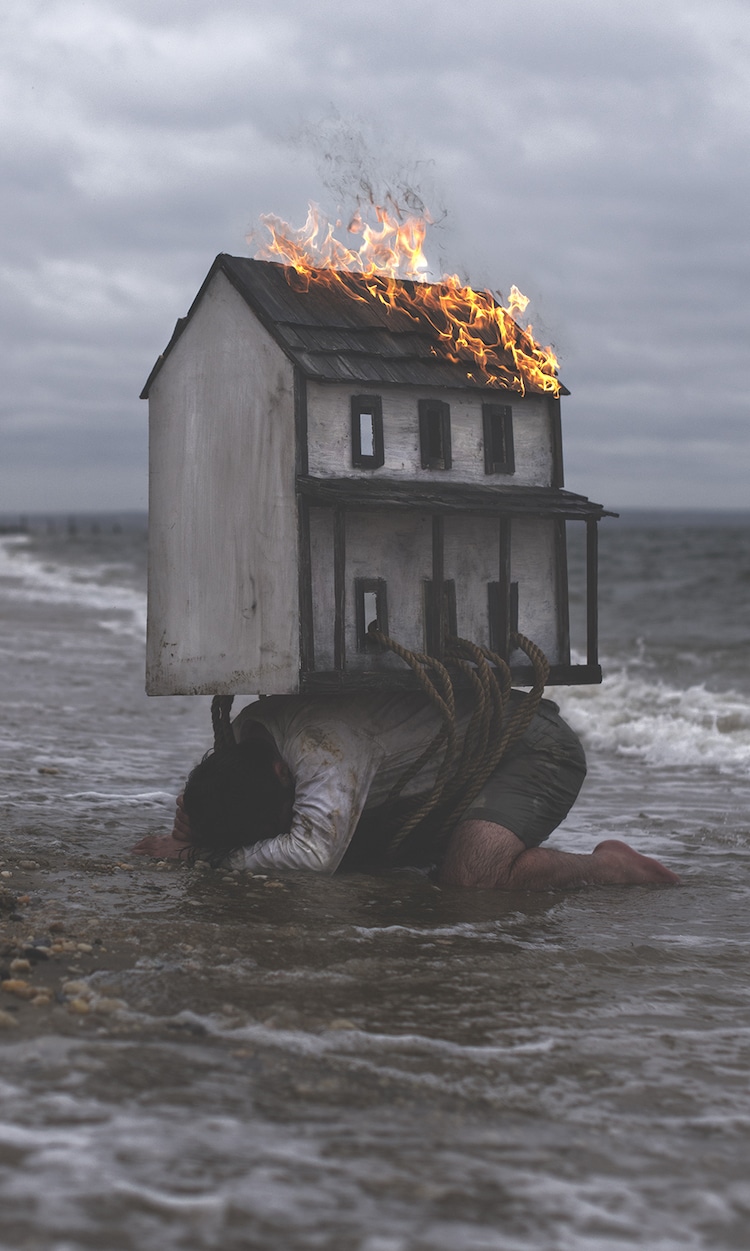 Is there one card that is particularly memorable for you?

The most memorable image that I shot was The Tower. This was one of the first images that I shot for the series. I became a character with a burning dollhouse on his back, all while being in the wake of the freezing ocean in early March. This was a very challenging image to shoot, ranging from building the dollhouse itself, to having it burning and tied to my back in the frigid weather. My photography often puts me into difficult situations, and I always feel liberated after completing each challenging concept. This was an idea that had been living in my dream journal for a while, and it finally found its place within this collection of images. 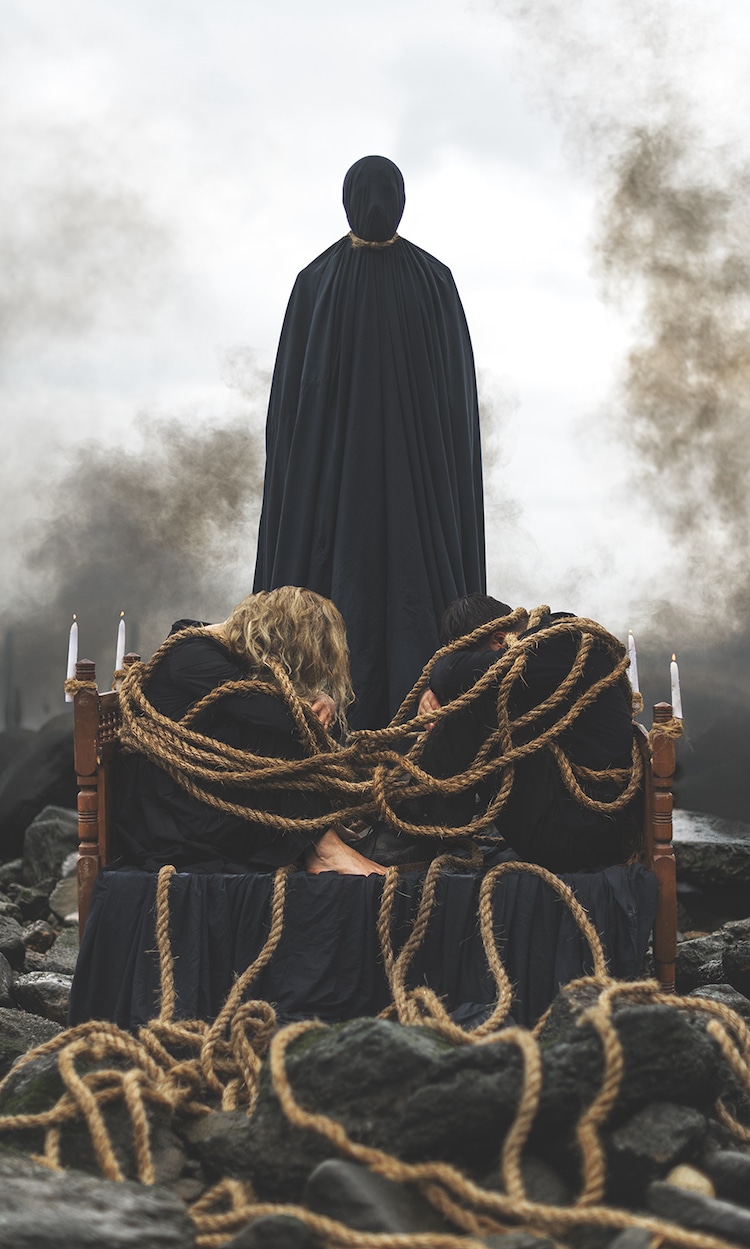 Your previous bodies of work have dealt with your experience with sleep (paralysis and keeping a dream journal). What kind of parallels can viewers find with your tarot cards and your sleep-focused series?

Through this series, the characters and symbols within my Sleep Paralysis imagery tell the story of each tarot card. Figures like The Old Hag and The Shrouded Man make their appearances, while my dream symbols of murky marshlands and tattered rope help communicate complex ideas. Viewers who are familiar with my Sleep Paralysis series will immediately pick up on familiar concepts that I’ve woven into the tarot imagery. Because my Sleep Paralysis series and the classic tarot deal with the subconscious and conscious mind, creating fluid parallels between the two bodies of work was a seamless process. 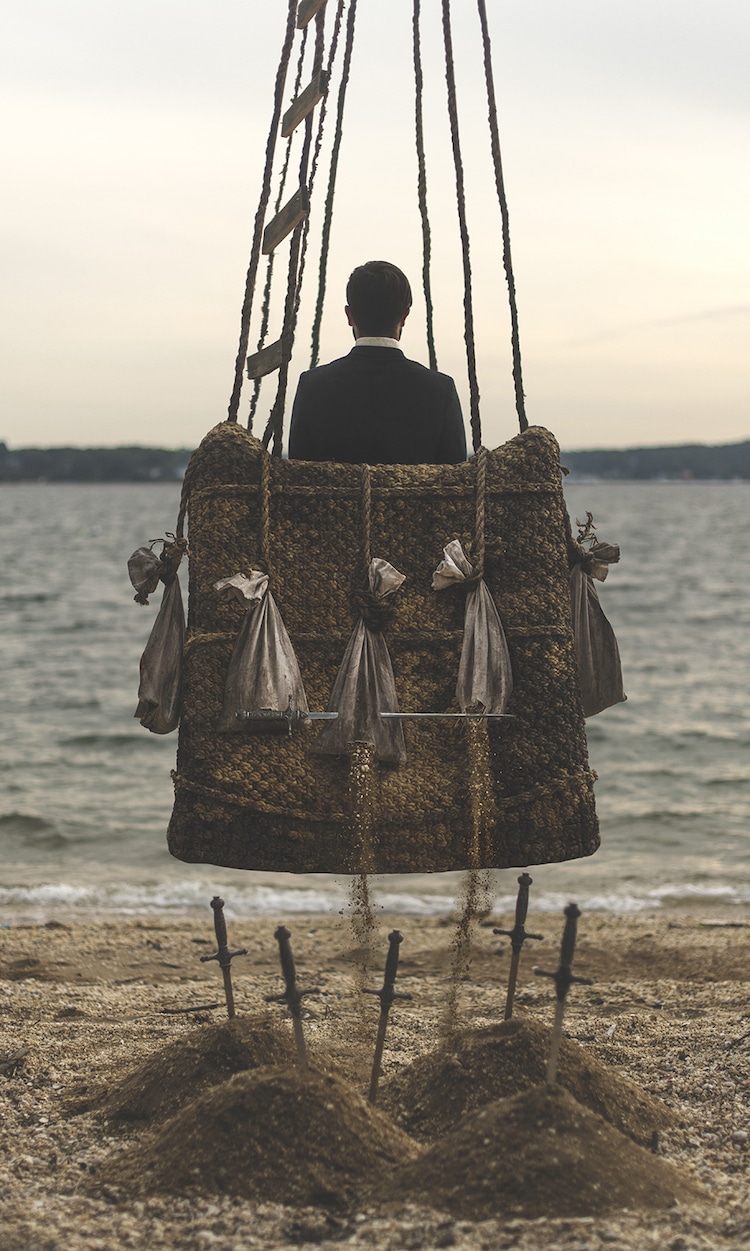 What can viewers expect when they see your exhibition?

I hope to immerse my viewers in the story of the classic tarot in an entirely new way. While offering a new glimpse into the world that I create through my conceptual photography, I am also excited to open up the interesting stories of the tarot to new and experienced enthusiasts. There are so many archetypes, life lessons, and clever connections within tarot, and I hope my viewers can use my series to dive deeper into the creativity that lies behind these mysterious cards.

My solo exhibition The Somnia Tarot at Haven Gallery, NY will be on display until March 21st, where all 78 pieces are being exhibited. I will be opening preorders for tarot decks of the series in late March on somniatarot.com, along with a hardcover book. There will be a new video documentary on my artwork and process coming out in late April. All of my upcoming projects and pieces will be shared on my Instagram. 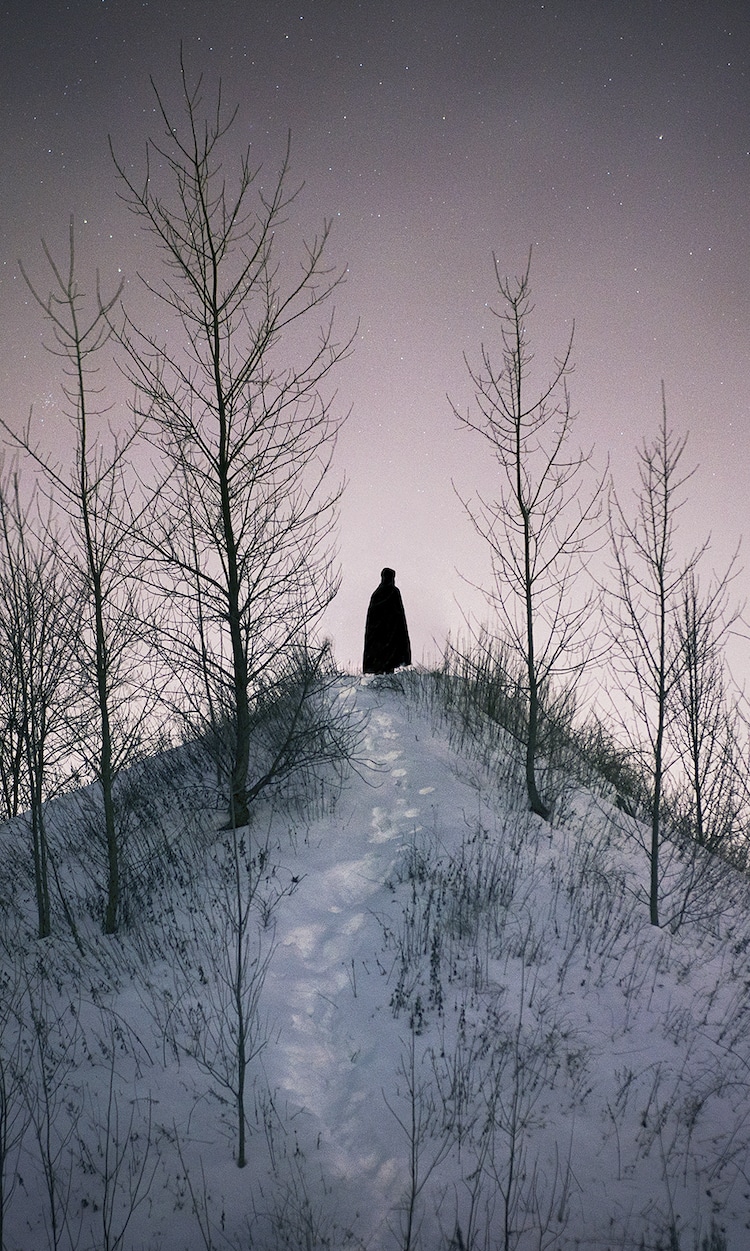 Surreal Photos Look Like They’re Straight Out of a Dream