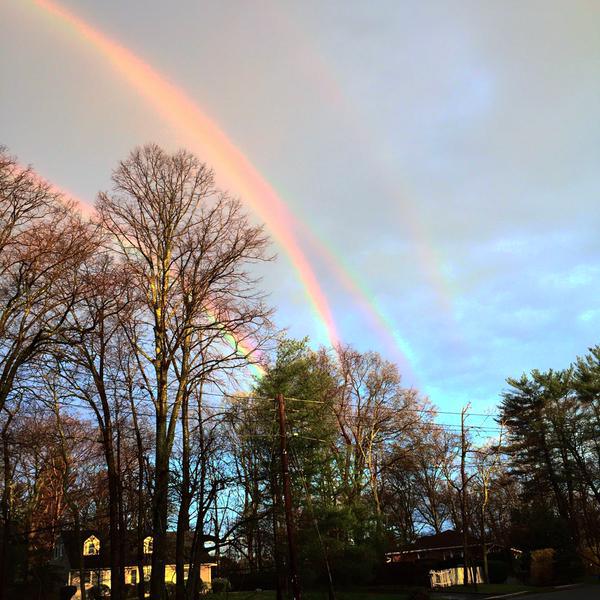 If you've ever been lucky enough to witness a double rainbow, you know how rare that phenomenon is. But what about a quadruple rainbow? That's even more uncommon, though it definitely happens. Amanda Curtis snapped this gorgeous image over Glen Cove, New York on April 21 while waiting for the Long Island Railroad to arrive. It features streaks of arcing, colorful light that paint the cloudy sky as two of the rainbows intersect.

To get a sense of just how rare this sighting was, quadruple rainbows were once believed to be impossible. It wasn't until 2011 that there was photographic evidence of a triple rainbow. Meteorologists Raymond L. Lee Jr. and Philip Laven also published a paper in Applied Optics explaining the conditions that might produce them.

Lee and Laven used a mathematical model to predict the circumstances. It begins with dark thunderclouds and either a heavy downpour, or a rain storm with near-uniformed-sized water droplets. When the sun breaks through the clouds, it then projects the rainbows against the dark puffs. The contrasting colors make the wonderful anomaly visible.

Witnessing a quadruple rainbow is a stunning spectacle.