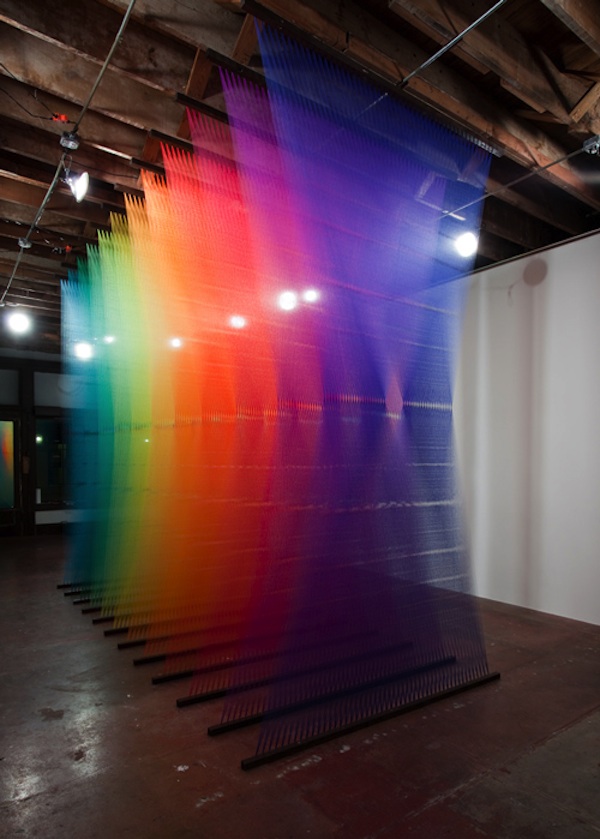 Though we can appreciate Gabriel Dawe's beautiful thread art by just looking at these pictures, we're certain that these photos will never quite do them justice. In fact, we can imagine ourselves walking around these rainbow prisms and just getting lost. I asked Dawe to tell us what he hoped others got out of his artwork including what they represent.

“Conceptually, these works are about the human need for shelter,” he tells us. “Fashion and architecture have many functions, but one thing they both share is that they protect us from the elements. I'm taking the main material that clothing is made out of–thread–to make an architectural structure. By reversing scale and material in this way, I end up with a structure that I see as symbolic of the social constructions humans need to survive as a species.

“Ultimately, what I want to give the viewers is an experience with light and color. The thread is so thin, that when it is used in such a large scale it kind of disappears, which is why these installations sometimes look so ethereal. It plays with perceptions and it can even mess with your sight, because your eyes don't know where to focus; it is very much like op art in this sense. Despite being static objects, they move as soon as you start moving. This is what is most challenging to capture in the documentation of the pieces, because you cannot capture that with the camera. You can have great photos, but they will never fully give you the experience of seeing them in person.

“What is very satisfying is that I hear all the time that people go back to see them and stay for half hour, experiencing the piece. They seem to be installations that really engage the mind, and as an artist I don't think I could ask for anything more.”

Read the rest of our interview with Dawe below. 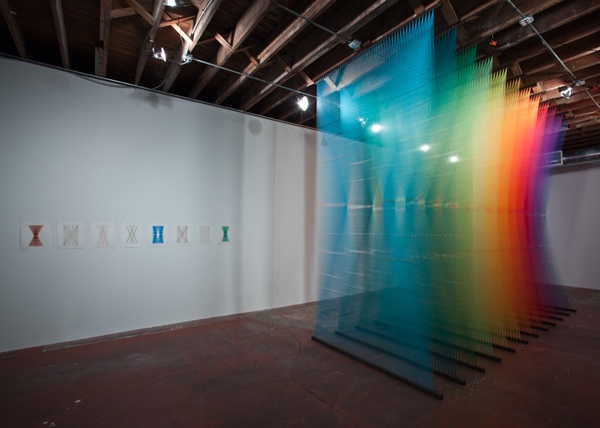 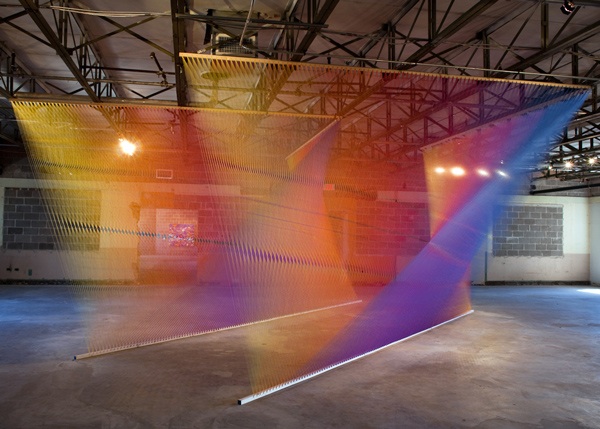 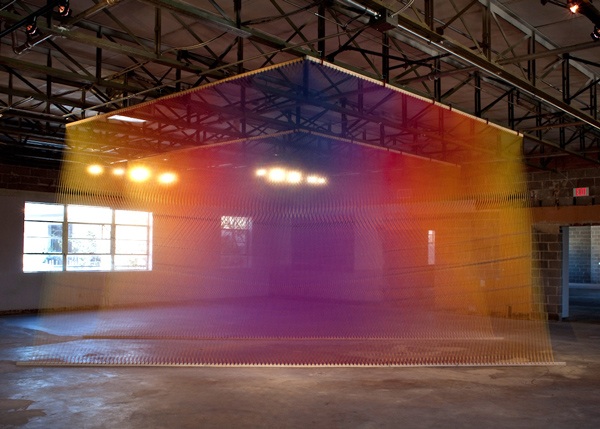 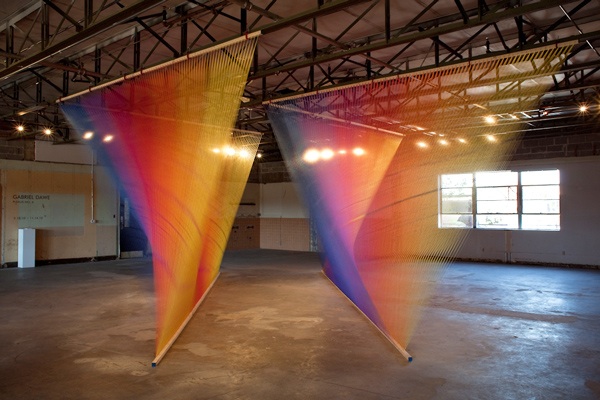 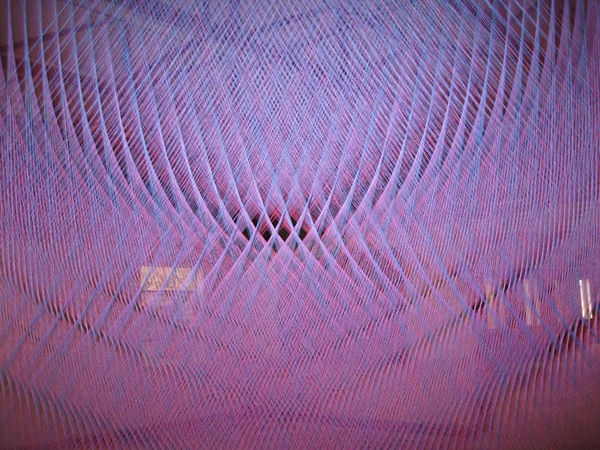 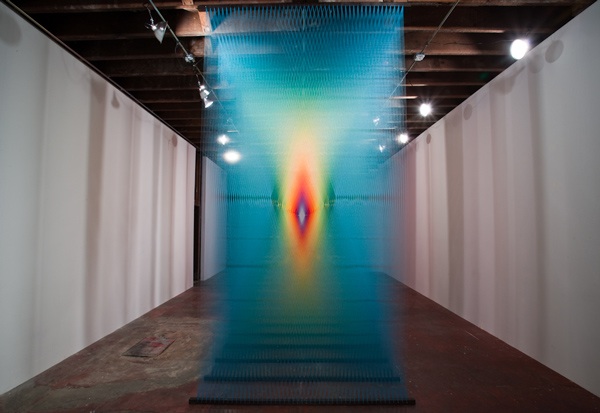 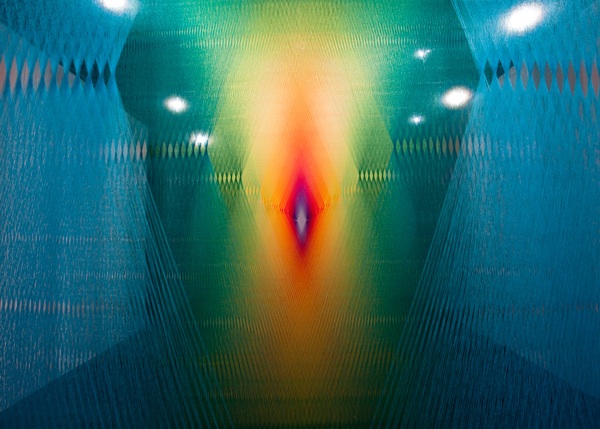 You are formally trained in art with an MFA in arts and technology at the University of Texas at Dallas. How has this training helped shape your work?
The MFA at UTD is a very flexible program which has allowed me to focus on the areas I'm most interested in. What has been great about UTD is Centraltrak, the university's Artist in Residency program, which besides giving me a great studio space has offered a platform from which to showcase my work in Dallas.

Can you tell us about how your art is influenced by your heritage?
Mexico is a country with incredible diversity. Every region has its own character, with its own variety of food and hand-crafts. In our home, my parents had a good collection of crafts, mostly from places we would go on vacation, so I grew up surrounded with all this beautiful and colorful work.

On average, how long do these amazing installations take you?
It all depends on the size. There are different stages in the process. To prepare and install the structure, takes me between two and five days, usually with some help.The thread I install on my own, one thread at a time; the largest and most complex one took me about 105 hours over a period of one month. I've done projects in just one week, and I've even done smaller ones which have taken me just a couple of days. There's also a lot of planning involved before the actual execution.

Anish Kapoor's “Memory,” shown at the Guggenheim last year was mind blowing. The way he is able to capture abstract concepts that relate to the infinite is unbelievable. It is one of those pieces that if you see a photo you just can't get the full effect. I don't think there has ever been someone able to make you stare at empty space and feel inspired as Anish Kapoor is able to. It just left me speechless.

Who are some other artists that influence you?
I really like work that is obsessive in nature and manages to extend the limits of what someone can do. I think some of Tom Friedman's work is like this. Others include James Turrell, Liza Lou, Yayoi Kusama, Chiharu Shiota, Walton Ford and Tara Donovan.

What are some important life/art lessons you've learned that you'd like to share with others?
This might sound clich, but I think it is important to stay true to yourself, and never give up. Hard work is the best policy as long as you enjoy what you do, if you don't, what's the point?

If you're in Dallas, you can still check out one of these gorgeous installations until January 23, 2011 at the Dallas Contemporary.

Gabriel Dawe
Thanks, Amy, for the tip! 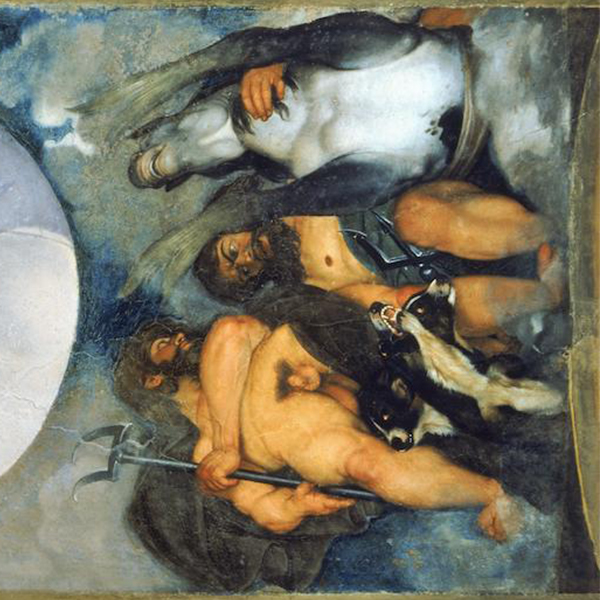