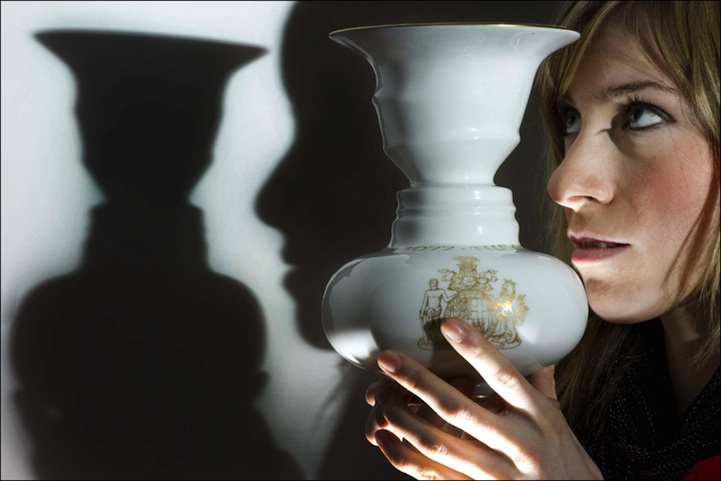 Today, I'm all about celebrating The Queen's Diamond Jubilee! Of course, we all love a good illusion and this vase with hidden faces is something quite special. Though it was created to commemorate The Queen's Silver Jubilee in 1977, the Rubin's Vase has now gone on display at a place I'd love to visit, Camera Obscura and World of Illusions in Edinburgh, to celebrate this year's festivities. (For those unfamiliar with the Rubin's vase, it's named after the Danish psychologist Edgar Rubin who discovered that the eye is unable to process two images at once but can shift between figure and ground, or silhouette faces and vase.)

Look closely and you'll see the silhouettes of Queen Elizabeth II and Prince Philip. This is one illusion that only gets better in person. That's because the vase has been mounted on a turntable so that the faces look like they're actually talking to each other!

Andrew Johnson, director and manager of the Camera Obscura, said: “We are thrilled to celebrate The Queen's Diamond Jubilee with this highly unusual exhibit.

“This Rubins Vase is extremely rare and is one of the best examples of its kind. Most Rubins vases have only one hidden face, whereas this vase has two.

“We thought it was the perfect way to mark The Queen's Diamond Jubilee and give our visitors a chance to see The Queen and Price Philip in a whole new light.”