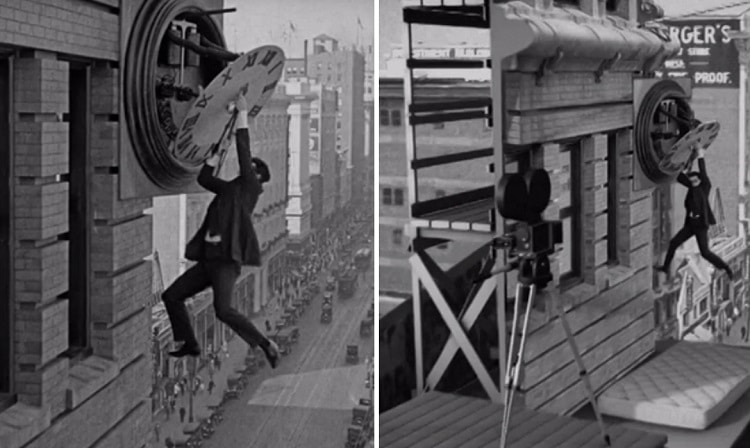 Long before CGI and the green screen, silent filmmakers were incorporating astounding visual effects into their work. These ingenious techniques didn’t rely on digital tools, as there were none at the time. Instead, to surprise and delight viewers, silent film effects used elements like trick perspective, hidden pulleys, and filter adjustments to make the magic happen.

Redditor Auir2blaze compiled some of these effects into a post on Imgur and then explained how exactly they were done. This includes behind-the-scenes shots of actor Harold Lloyd dangling from a clock over city streets, and how Mary Pickford could kiss herself on the cheek in Little Lord Fauntleroy. Both required creative problem solving and are a fantastic example of how movie-makers pushed the technical boundaries in very early film.

See more of this ingenuity in the GIFs below.

Safety Last! used perspective to create the illusion that actor Harry Lloyd was hanging off a clock. “The set was built at the right height for Lloyd's climb,” Auir2blaze writes, “but on the roof of a building across the street. As Lloyd climbed higher, the set was moved to taller buildings.”

As Charlie Chaplin roller skates around a department store in Modern Times, he nearly takes a tumble. But don't worry, he was completely safe. “Part of the background was painted on a piece of glass,” Auir2blaze explains, “which was placed in front of the camera.”

Actor Douglas Fairbanks dramatically slid down a sail in the 1926 flick The Black Pirate. His brother Robert, an engineer, actually figured out this effect. “The camera and the sail were both placed at an angle,” Auir2blaze says. “Fairbanks's knife was connected to a hidden pulley and counterweight. Airplane propellers were used to make the sails billow.”

Is this a clever eye trick or ingenious camera work? The latter. Actor Colleen Moore's eerie expression in Ella Cinders was the work of matte shot. Two halves of her face were filmed separately. “Basically, a piece of glass with half the frame painted black was placed in front of the camera, so only one side the film was exposed,” Auir2blaze describes. “The film was then wound back, the glass was switched for one with black on the other side. The key was to avoid having either the camera or the Moore's face shift in position while shooting, or the effect would be ruined.”

The film Little Lord Fauntleroy wasn't the first time that audiences saw actor Mary Pickford appear twice in the same scene. It was, however, the first time they saw the doubles interact. “Famed cinematographer Charles Rosher achieved the effect,” Auir2blaze explains, “of having Pickford move behind her own face by having a very detailed silhouette of Pickford painted on glass, and using a metal frame that prevented the camera from moving. The three-second shot took 15 hours of work to get right.”

As Jesus healed lepers in Ben-Hur, it looked like cinematic magic. In reality, it was the work of cinematographer Karl Struss and his use of a color filter. Auir2blaze says, “When the filter was adjusted, the women's leper makeup was no longer visible on film.”

Matte shot made it look like actor Buster Keaton was driving over a broken bridge. “The bottom of the frame was blacked out, lining up with the top of the bridge, and Keaton was filmed riding while the bridge was still intact,” Auir2blaze writes. “The footage of the trucks was filmed separately with part of the bridge removed.”