Nature produces an array of incredible gems that look simply out of this world. Opals, specifically, have a mesmerizing amount of visual diversity. Some seemingly contain small fireworks hidden within them, while others resemble a prismatic universe bursting out of wood. There are continually new discoveries of these gems that are each more dazzling than the last, like the Virgin Rainbow. This stunning opal made its public debut just last year in Adelaide, Australia.

The Virgin Rainbow was discovered in 2003 by miner John Dunstan in the opal fields of Coober Pedy, located in South Australia. It's technically an opalized fossil, the result of land that was once a vast inland sea filled with prehistoric aquatic reptiles. As they died, they sank to the bottom of the sea and were buried by sediment over a long period of time. The sea dried up and the land transformed into a desert, where acidity levels and weathering sandstone released silica into the ground. This gel then hardened into the pockets and impressions of the opals, bringing them to this fossilized form.

Many opalized fossils lack an intense surface sheen, but this is not the case with the Virgin Rainbow. It radiates an internal fire, beaming fantastic multicolored hues that only grow more intense as the lights dim. “You'll never see another piece like that one, it's so special. That opal actually glows in the dark–the darker the light, the more color comes out of it, it's unbelievable,” Dunstan told ABC.

The Virgin Rainbow's magical qualities make it a highly-prized fossil. It's currently valued at over $1 million. 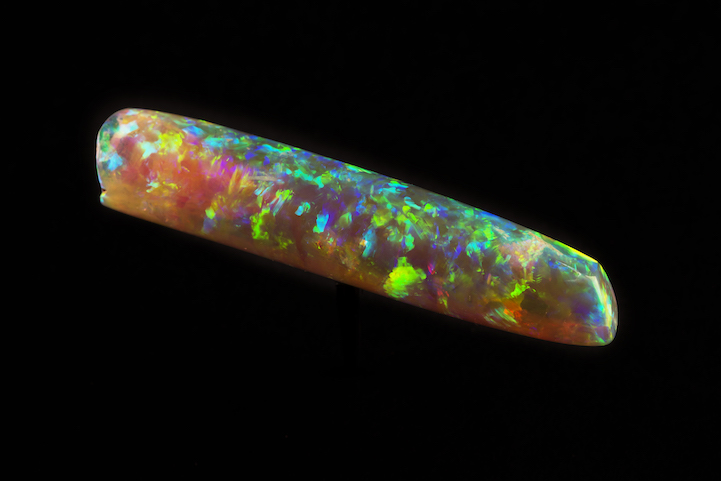