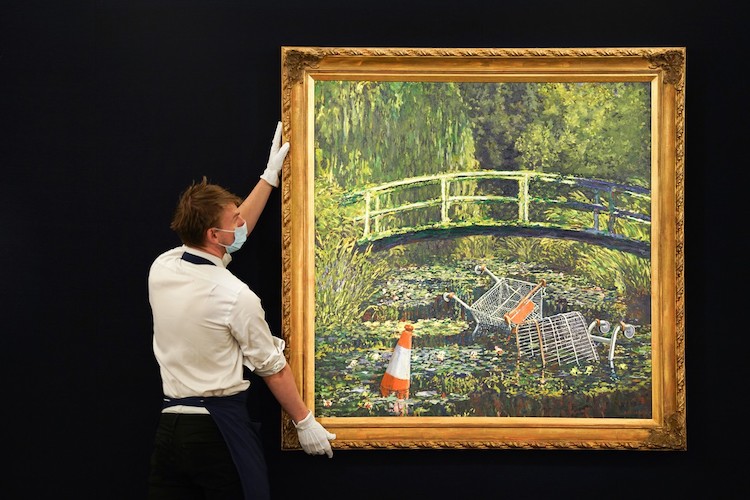 Another Banksy painting is up for auction and it's expected to sell for a large sum. Sotheby's London has announced that the elusive street artist's 2005 Show Me the Monet will be part of their Contemporary Art Evening Auction on October 21, 2020. Estimated to fetch anywhere from £3 million to £5 million ($3.9 million to $6.5 million), the painting is an homage to Claude Monet's 1899 The Water Lily Pond.

The artwork was originally created as part of Banksy's crude oil series for his “gallery of re-mixed masterpieces, vandalism, and vermin” that ran for a little over a week in a small London shop in 2005. The show featured 22 paintings by great masters as reinterpreted by Banksy. This included pieces showing Van Gogh's Sunflowers wilted and a man in Union Jack shorts breaking the window at Edward Hopper's Nighthawks diner.

Show Me the Monet features Monet's idyllic Giverny lily pond with a few intruders. Grocery shopping carts and an orange traffic cone bobbing in the water bring to light Banksy's dystopian view of society. “In one of his most important paintings, Banksy has taken Monet’s iconic depiction of the Japanese bridge in the impressionist master’s famous garden at Giverny and transformed it into a modern-day fly-tipping spot,” says Alex Branczik, Sotheby’s European Head of Contemporary Art. “Ever prescient as a voice of protest and social dissent, here Banksy shines a light on society’s disregard for the environment in favor of the wasteful excesses of consumerism.” 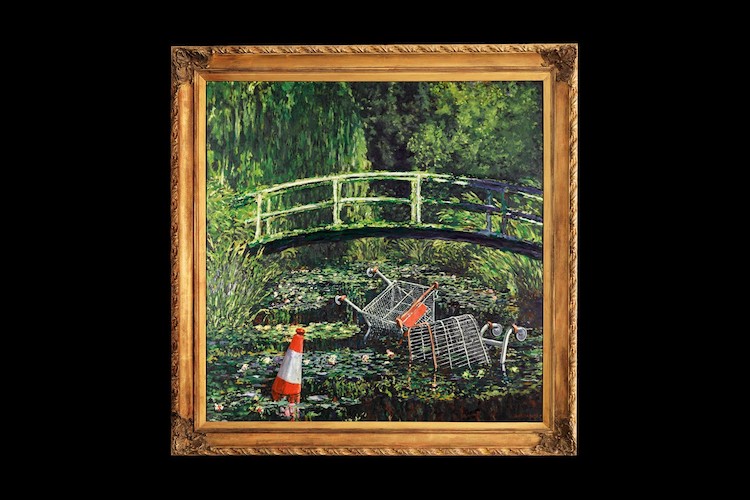 Banksy's Show Me the Monet is on view at Sotheby's London's New Bond Street gallery before moving to New York and Hong Kong later in the month. It will return to London in time for the October 21 auction, which will take place via livestream.

All eyes are sure to be on the Banksy painting. Last October, his Devolved Parliament went up for sale at Sotheby's with a pre-auction estimate of $2.46 million. In the end, the painting was sold for a record-breaking $12.1, beating Banksy's previous auction record by over $1 million. The art world's eyes will certainly be watching to see if he can replicate that success.

. Devolved Parliament I made this ten years ago. Bristol museum have just put it back on display to mark Brexit day. . “Laugh now, but one day no-one will be in charge.”

The Sotheby's auction isn't the only reason that Banksy has been in the news lately. His efforts to trademark his iconic Flower Thrower images was foiled, as the European Union intellectual property office declared his application invalid. In 2019, Banksy opened his Gross Domestic Product shop, stating at the time that it was “for the sole purpose of fulfilling trademark categories under E.U. law.”

These words have come back to haunt him, as the office cited those words in their decision and said that his application was made in bad faith. Banksy also would have had to reveal his identity, as per copyright law, something that would have destroyed his carefully cultivated anonymous identity. Now, the British-based greeting card company that moved to have his application invalidated is selling greeting cards based on Flower Thrower.

All images via Sotheby's.

Banksy Opens His Own Homewares Store in London

Banksy Painting Immediately Self-Destructs After Being Sold at Auction for Over $1.3 Million