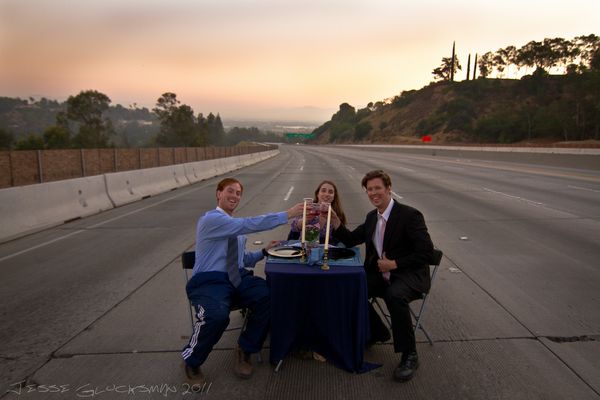 As the super-hyped Carmageddon approached, four college buddies came up with a daring plan – they were going to have a dinner party right on the closed 405 Freeway. After finding a viable stretch of road a couple days before, the crew began finalizing the details, including the menu, silverware and attire.

Matt Corrigan estimated that they were on the freeway for only about three minutes last Saturday before 6am. “I didn't have time to take my pants off, so I have on track pants, a tie and a shirt.”

“It was less than a minute before a couple construction guys drove up and told us to scram and I literally only managed to get the one good shot,” added photographer Jesse Glucksman.

So, why did they do it? “How often do college educated professionals in their late 20s/early 30s get to do something so ridiculous? I've got kids, man. I never have time to really have fun,” explained Glucksman.