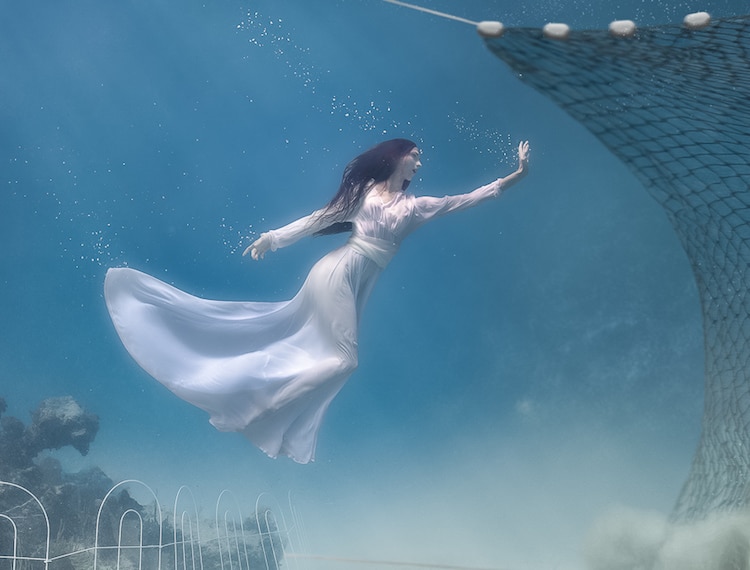 Self-described “underwater artivist” Christine Ren boasts a one-of-a-kind body of work. Pairing her background in dance with her passion for ocean conservation, Ren specializes in submarine dance. As she poses below the surface, her performances are documented, resulting in stunning photo series like Protect What's Precious.

At first glance, the eye is drawn to the aesthetic beauty of project. Clad in an exquisite white gown, Ren strikes elegant poses against a dreamy blue backdrop. A closer look at the scene, however, reveals its harsh reality: Ren, adopting the role of an “ocean guardian,” is not just dancing—she's facing off against a menacing trawling net.

Ren, who has a Master’s degree in Marine Affairs & Policy, was inspired to create Protect What's Precious after learning the truth about trawling. “When I read an article in ScienceDaily highlighting that bottom trawling's impacts on the ocean are clearly visible from space,” she explains, “I decided to make this destructive fishing practice, and its solutions, the focus of my next underwater imagery campaign.”

Made possible by a grant from Redbubble and shot in the Bahamas, this is Ren's most ambitious project yet. Read My Modern Met's exclusive interview below to learn more about Protect What's Precious. 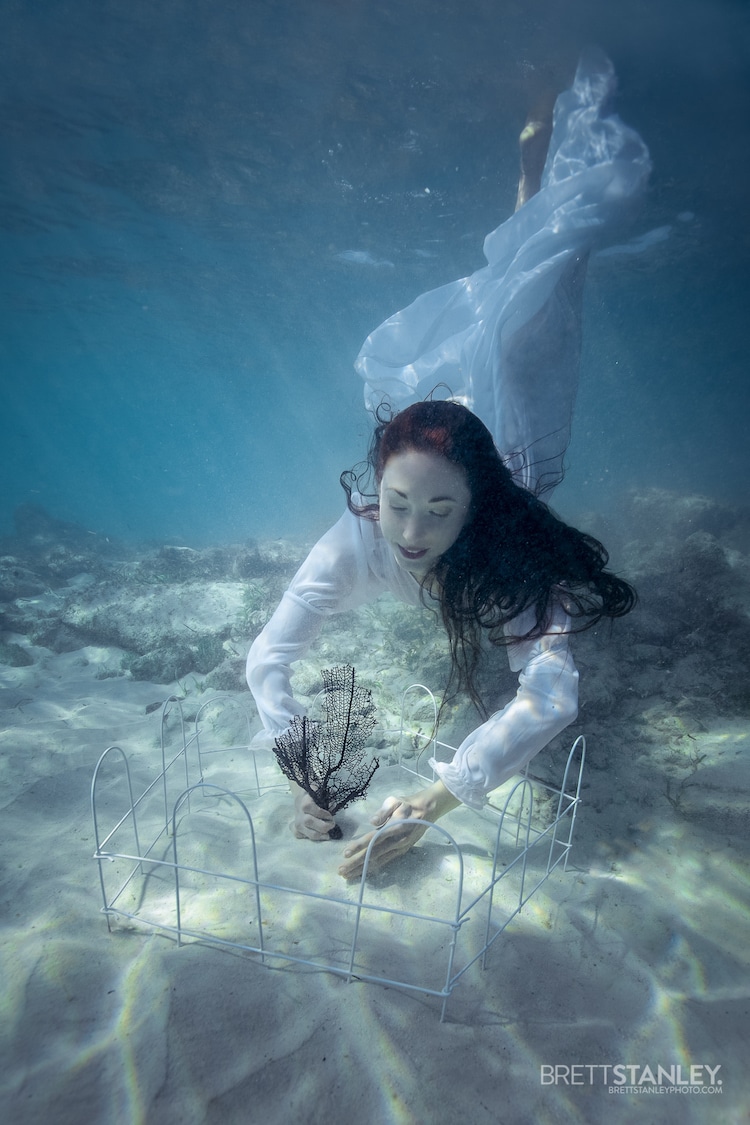 What inspired you to pursue this field of photography?

I have always loved the ocean since I was a child. My parents would take me to the New Jersey Shore every summer and I taught myself to swim very early. It was always a place that felt like home to me.

I wasn't inspired to pursue it more as a vocation though until I did a study abroad course in Tropical Marine Ecology in Honduras as an undergrad student. When I learned that the coral reefs were projected, by some studies, to disappear within my lifetime, I felt the calling and made it my mission to contribute to writing a different fate for the ocean.

What sparked your decision to pair your marine science studies with dance?

During and after my Master's degree, I experimented with being an agent of change for ocean conservation in almost every way that currently exists—policy, education, advocacy, and science. None of them on their own felt a seamless fit for me and it became clear that, as a creative at heart, I was going to need to find a way to use my own unique talents and skills to progress ocean conservation.

How did you come up with the concept for Protect What's Precious?

I'd been wanting to tackle trawling for a long time. But after discussing it with my underwater photography collaborator Brett Stanley, we knew it had to be staged on or around an actual coral reef which becomes much more costly than shooting in a local Los Angeles pool. I wanted to embody an ocean guardian standing off against one of these trawl nets coming in towards a reef.

Brett suggested we try to ensure we had both “problem” and “solution” shots as well; particularly, using fences around the reef to convey the idea of coral reefs as gardens that should be protected. Fencing off areas of land, such as designating them as parks for non-development or clear-cutting, was something we wanted to directly carry over and convey as also a practice that works for the protection of underwater habitats. 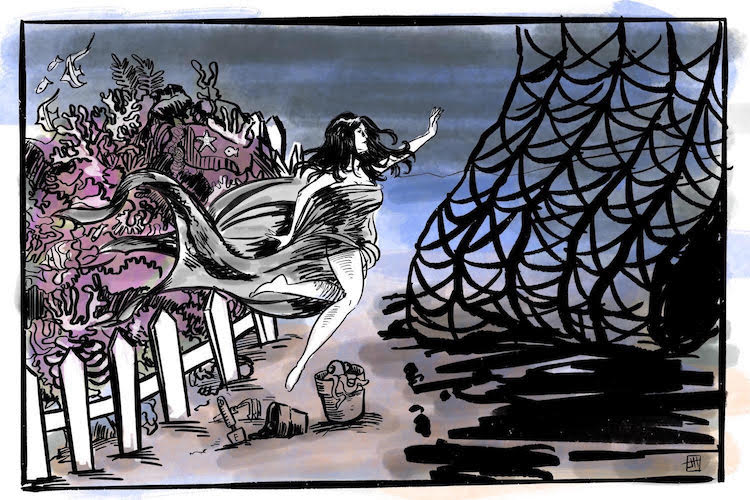 How is Protect What's Precious different from your past work?

This campaign was a bit different because I wasn't completely self-funding it. Redbubble came to our aid in that regard though with a “Create Some Good” grant which allowed me to pull the campaign off at-cost and, in my opinion, take the narrative to an entirely new level. Better art with a bigger impact comes through being able to pull in a larger team and better creative resources.

The series was also different because it was the first one I'd done out of a pool context and in an open-ocean setting.

How did you prepare for the shoot?

In late September 2018, after receiving the grant award from Redbubble to execute this concept I pitched, we were in a mad dash of pre-production for about 3 months before we had to shoot and deliver the entire campaign by early to mid-January for approval to post on Valentine's Day. I have never so quickly brought one of these underwater imagery campaigns to bear, especially one on location in a destination I had to fly the entire team into.

Having a budget to create with, though, made all the difference in terms of the narrative and final product. I was able to have lengthy conceptual discussions with Brett Stanley, our underwater photographer, who has a keen sense of what will resonate most clearly visually and not. After that, I was able to hire Joe Hoddinott, an underwater photographer in his own right but also a fantastic storyboard artist, to create mock-up visuals of the final product.

We quickly had to then squeeze in and schedule the entire team to get to the Bahamas in December and also find a local guide and private dive boat that would take us out within budget. Shaun Osborne of Bahama Island Excursions donated his boat—besides fuel, captain, and safety costs—for us to use, and without him, we couldn't have pulled it off. 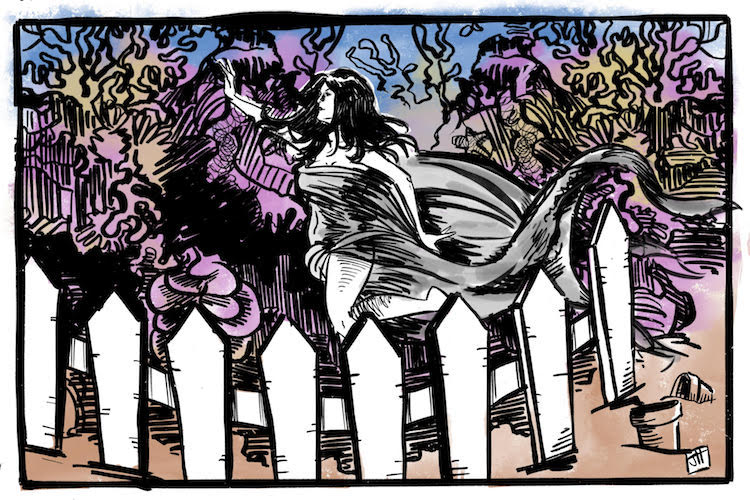 What challenges does dancing underwater pose?

The challenges with this project were manyfold more than some of my previous work executed in the controlled environment of a pool. Pulling the shoot off within the budget was one of the largest challenges, and figuring out how we were going to build and install our mock-up trawl net was another. We also had to deal with changing weather patterns and visibility conditions for the open water shoot and finding the right location within our limited time span.

On top of that, the water in the Bahamas was in the mid-seventies, which, when you're the model wearing a thin dress 15-20 feet underwater, is frigid. I hadn't trained for the cold water and my breath-hold was terrible because my body couldn't relax and was convulsing the entire shoot. Overall, I still cannot believe we pulled it off despite the budgetary, timeline, weather, temperature, and prop challenges. This is the campaign I am definitely the most proud of and feel its my best work to-date.

Brett Stanley and Kristy Jessica, our behind-the-scenes videographer and editor, were instrumental in improving the concept and vision as well as, most importantly, helping me stay grounded when I felt I might crack under the pressure, which just kept mounting.

Were there any particularly memorable moments you had while shooting?

The moment on the boat after the shoot, when I was alone with just the captain and my BTS videographer Kristy while the team was still underwater breaking down the set, is one of the most memorable for me.

I can't even begin to explain how cold and tired I was then. I was still shaking, my fingers and toes were completely numb, but I slowly began to thaw as I held a thermos of hot tea Kristy had handed to me. The waves were lapping at the boat and I just kept thinking that we did it and how this entire group of people came together to make this happen and that this was the best tired I'd ever been. I couldn't believe we had done it. It was that feeling of improbable victory. I'll never forget it. I try to hold onto moments like that—to remember that the impossible is possible, especially when caring individuals band their minds, hearts, and resources together.

What do you hope your viewers take away from Protect What's Precious?

Protect What's Precious is a narrative underwater photo campaign aimed at conveying how the creation of Marine-Protected Areas (MPAs) help safeguard the ocean from trawl nets that bulldoze the seafloor. I hope viewers come away with a better understanding of the devastating effects of ocean trawlers and ways we can help protect our ocean resources for future generations. 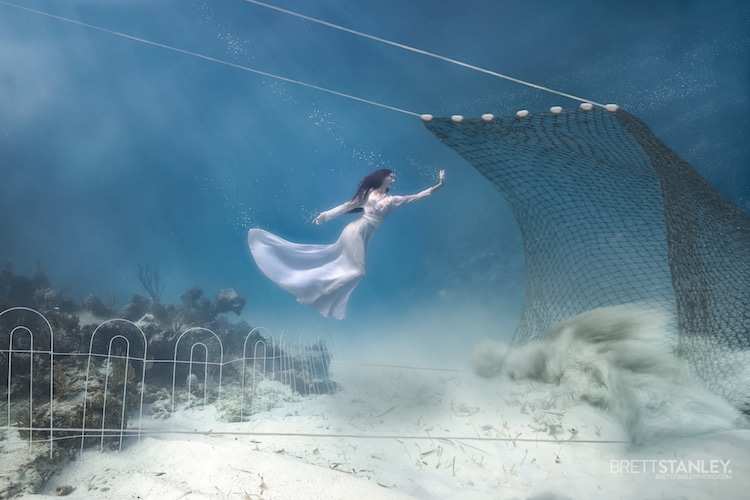 What other Underwater ARTivism projects do you have in the works?

I will be releasing an underwater body painting photo campaign with Brett Stanley and Lana Chromium soon which is related to coral bleaching and chemical sunscreens. There are actually some big shifts brewing for me with my underwater work.

I've increasingly become aware of the digital content shock for our culture. 500 hours of youtube videos are uploaded online every 60 seconds. It's becoming so hard, even with incredible imagery, to get messages to land with impact online. I won't stop putting content online digitally, but digital-only is absolutely failing when it comes to conservation storytelling and even non-profit fundraising, in my opinion. The Internet and social webs in particular are not what they once were and things no longer go viral in the same way.

This is why I'm in the beginning stages of branching out into underwater dance videos, still environmentally-topical, projected in immersive 360 degree environments at ocean NGO fundraising events. We need to create immersive and transformative experiences for people that bridge the digital into the real world. And what I need in order to be that change is funding.

I want to build a multimedia engine powered by an underwater dance company whose performances are projected in immersive environments at large galas. That's the initial seed of the idea anyway. There are so many amazing technologies out there now that allow you to fully immerse a viewer in a visceral way in your content and I'm really keen to explore that in all its capacities—particularly for social and environmental issues. This year, I'll be releasing less content, but working double-time behind-the-scenes on this next phase I'm moving into . . . which, in all honesty, I have no idea if I can pull off.

Luckily, I'm based in Los Angeles now, with tons of other crazy creatives like me who tell me it's all possible.

My Modern Met granted permission to use photos by Christine Ren.