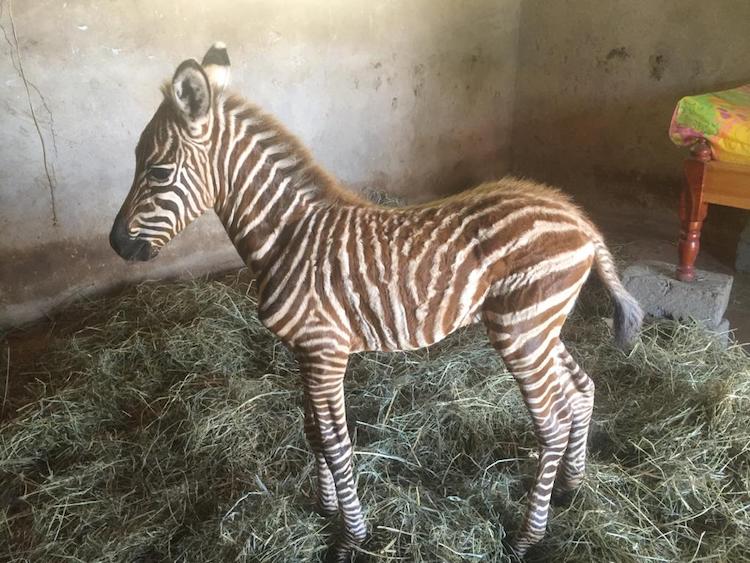 The realities of the animal kingdom can be cruel, but there are miracles that emerge from it. At the end of February 2020, a herd of goats and their herdsman saved a baby zebra’s life, and the love and care from animal conservationists has given the foal an opportunity to someday return to the wild.

The zebra is Diria—named after the ranch from where he was rescued—and he arrived at the Sheldrick Wildlife Trust in Kenya shortly after being saved from a near-death experience with lions. The pride killed Diria’s mother, and when the orphaned colt instinctively ran the other direction, he ran towards the group of goats. The herdsman brought him to Kenya Wildlife Service who then delivered him to the Trust’s VOI Reintegration Unit.

After Diria’s arrival, the Trust got to work taking care of him as a mother figure would. “Baby zebras need to be able to recognize their mother from birth to survive,” Rob Brandford, Executive Director of the Sheldrick Wildlife Trust, explains to My Modern Met. “To learn its mother’s stripes, a mother zebra will often separate herself and her baby from the herd so that the baby can imprint—essentially recognize and follow her coat, smell, and call. Once the calf can identify its mother, the duo will return to the herd.”

Without Diria’s mother, it's left to the workers to properly raise the foal. “In the wild, calves will be raised by their mother alone but at our Reintegration Unit, it isn’t practical for a single individual to hand-raise Diria should they go on annual leave,” Brandford remarks. “Therefore, to avoid this fragile new-born imprinting on one person, our Keepers don a specially made striped coat that Diria will recognize as his ‘mum,’ regardless of who is wearing it. A team of caregivers can give Diria the specialist 24/7 care he needs to give him the very best chance of survival.”

“Through the use of our specially made coat, a group of Keepers can offer this specialist care, walking with him in the protected area in the immediate vicinity of our Reintegration Unit so that he can learn about his wild environment,” Brandford says. Diria is affectionate with his caregivers, and he is said to “love nothing more than nuzzling into them”—with the exception of feeding time. “Keepers offer regular milk feeds and, at night, Diria sleeps in a stable so that he remains safe from predators. When he is older, it is hoped that Diria can return to his birthright: the wild, and reintegrate into the wild herds of zebras that live on the doorstep of the Reintegration Unit.”

A young zebra named Diria was orphaned when his mother was killed by lions. 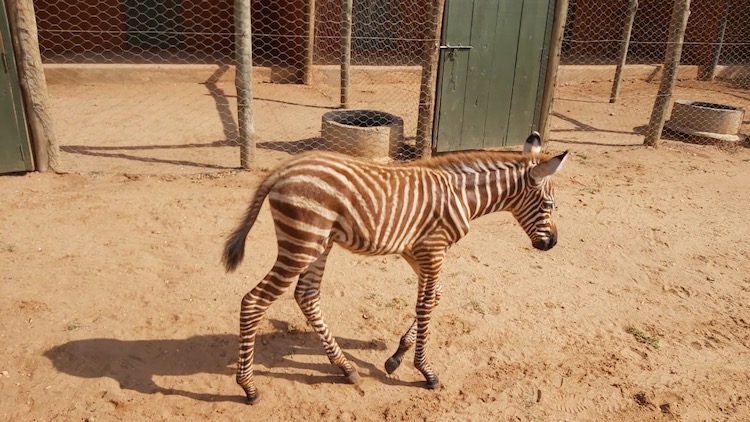 He was rescued by a herdsman and eventually taken to the Sheldrick Wildlife Trust. 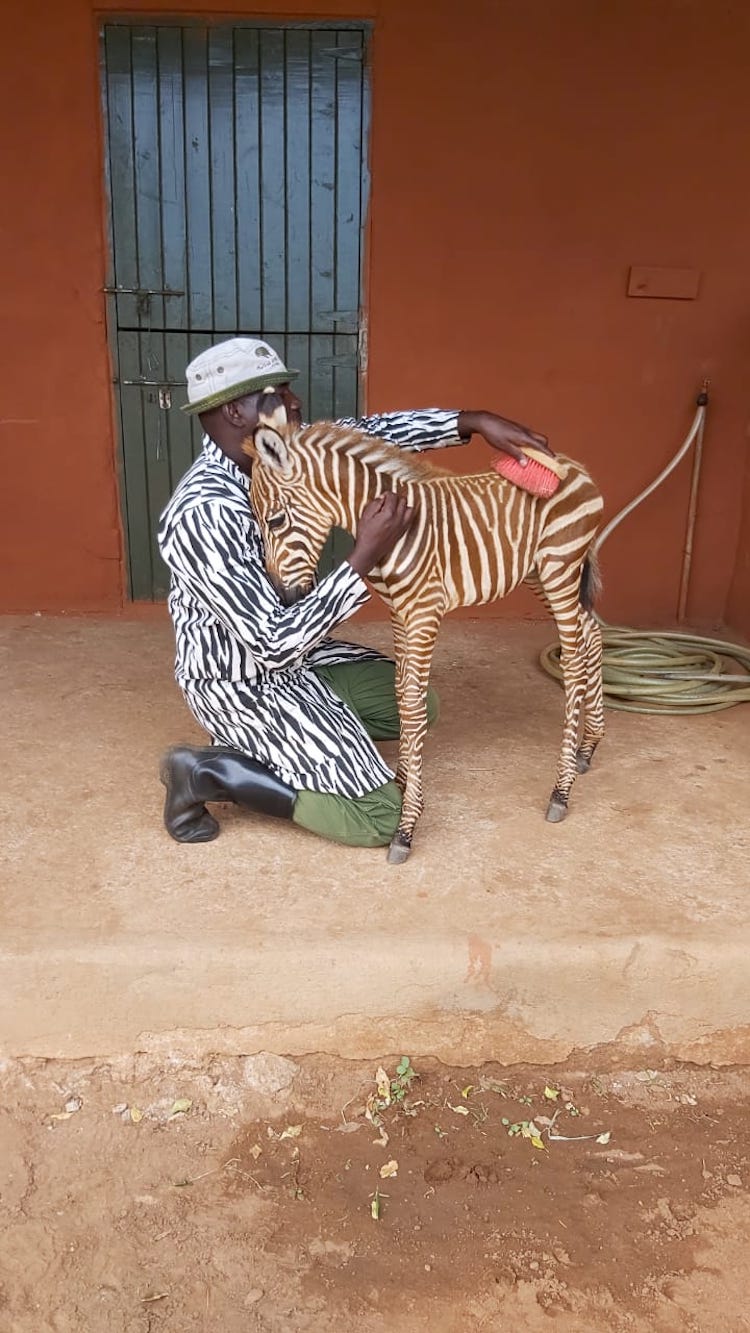 His caretakers wear special jackets so that he can “imprint” correctly and eventually return to the wild. 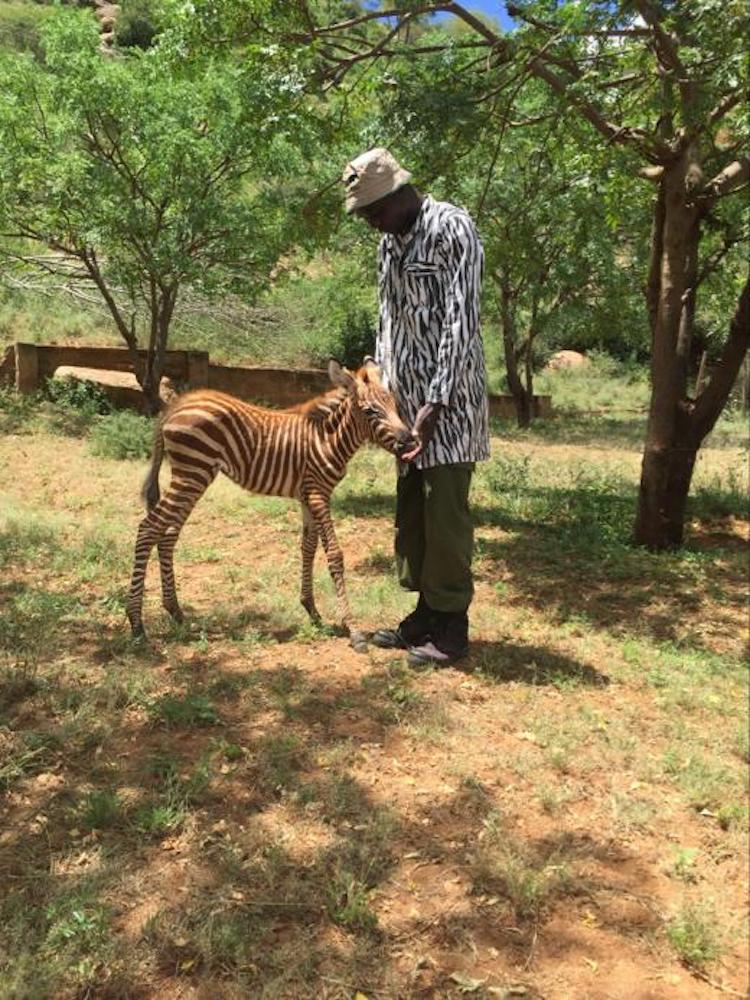 Photographer Spots Rare Baby Zebra with Spots Instead of Stripes