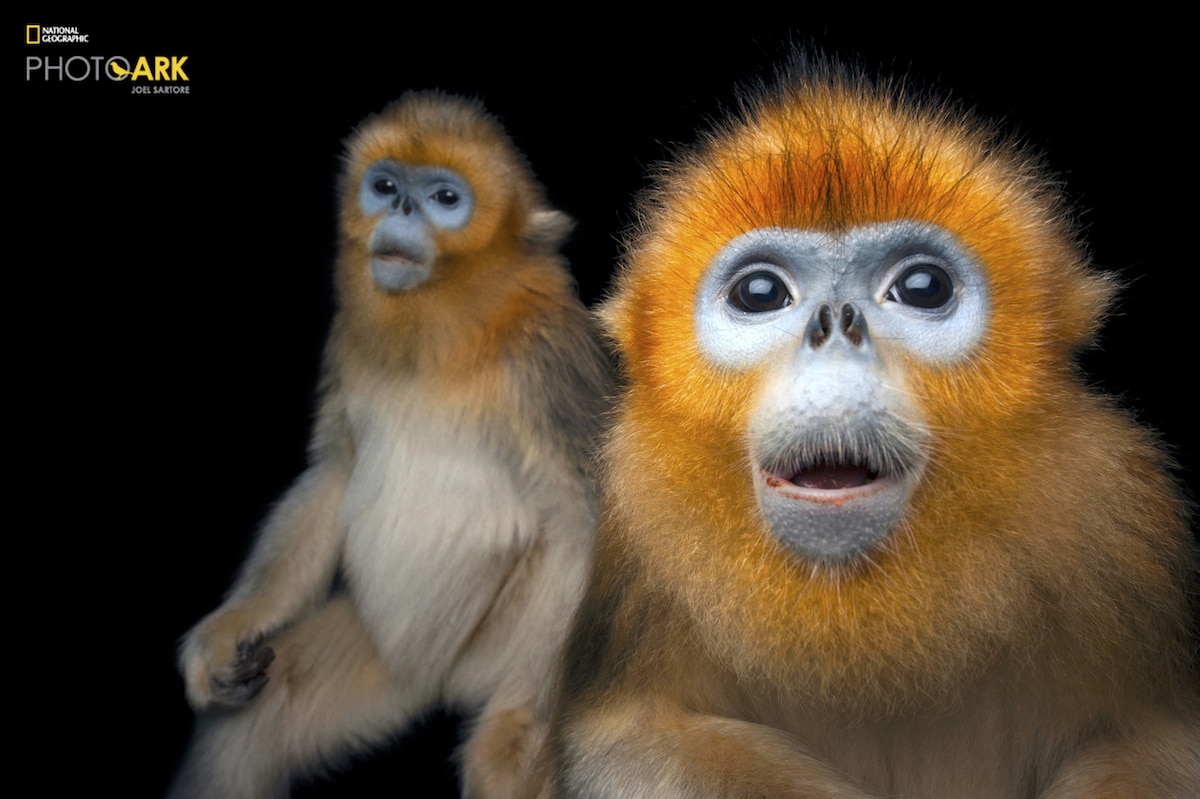 In collaboration with National Geographic, wildlife photographer Joel Sartore has spent the last 25 years capturing our planet's biodiversity. Aiming to inspire people to help save endangered species, he’s photographed over 9,500 mammals, birds, fish, reptiles, amphibians and invertebrates (so far) living in the world’s zoos and wildlife sanctuaries—it’s estimated that there are 12,000 in total. Once finished, Photo Ark will be the world’s largest single archive of studio-quality photographs of biodiversity.

In celebration of Sartore’s work so far, the International Center of Photography (ICP) and the Southhampton Arts Center (SAC) will showcase his stunning photographs in the upcoming National Geographic Photo Ark exhibition. His archive features images from photoshoots at more than 250 zoos, aquariums, and animal rescue centers around the world. Sartore hopes that the Photo Ark project will help inspire people to support on-the-ground conservation efforts. From a baby orangutan with her adoptive mother to a pair of federally threatened koalas, each close-up image gives an intimate view into the lives and personalities of these beautiful creatures.

“National Geographic is showcasing this important project through multiple platforms, including this exhibition, to inspire people not just to care, but also to help protect these animals for future generations,” the project press release says. “In addition to creating an archival record for generations to come, this project is a hopeful platform for conservation and shines a light on individuals and organizations working to preserve species around the world.”

The National Geographic Photo Ark exhibition opens on June 27 and runs through September 8, 2019.

We recently caught up with Sartore to find out more about this life-long project. Read on for My Modern Met’s exclusive interview. 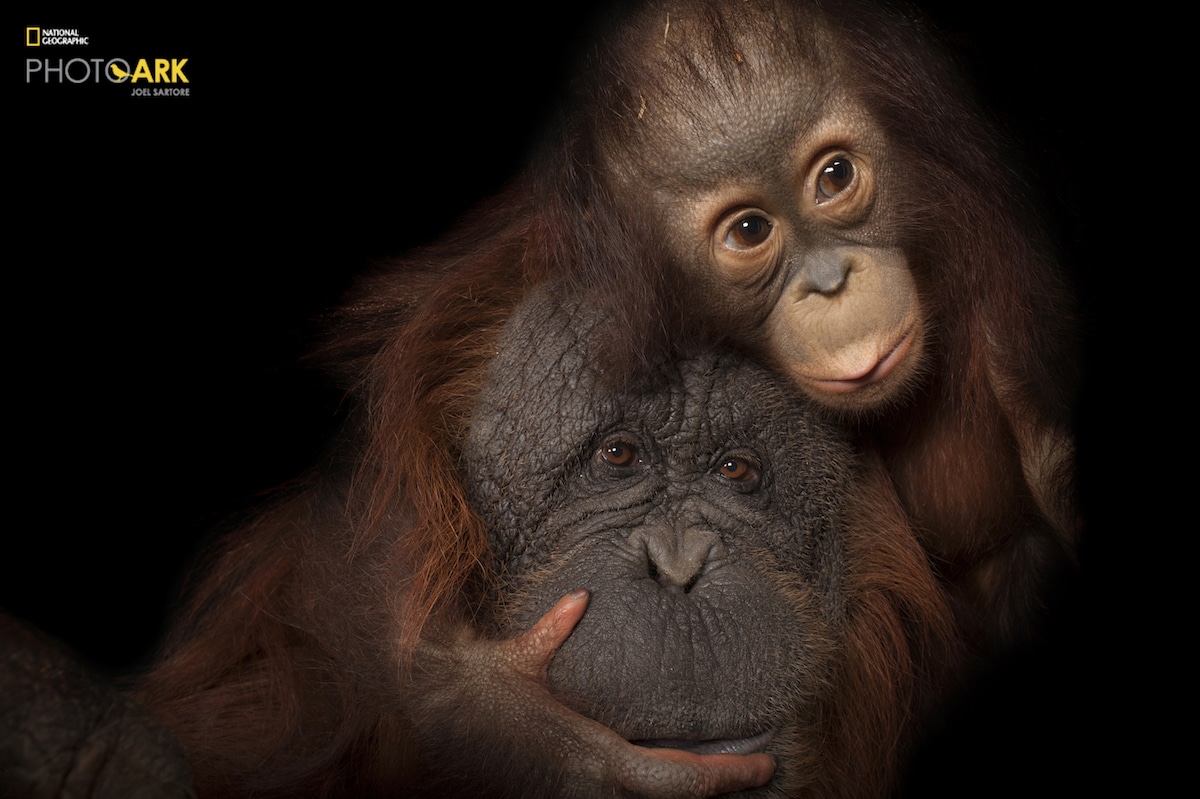 Your 25-year Photo Ark project is an amazing accomplishment. How did you stay focused on your goal to photograph every species in human care around the globe?

One thing that drives me is the fact that, for many of the smaller species I photograph, this is the only time they’re ever going to have their stories told to a global audience. For some, this may mean the difference between survival and extinction, depending on whether the public cares enough to save their habitat, decrease pollution, etc. So whether we’re celebrating minnows, sparrows, or salamanders, that’s a powerful motivator for me to keep going. 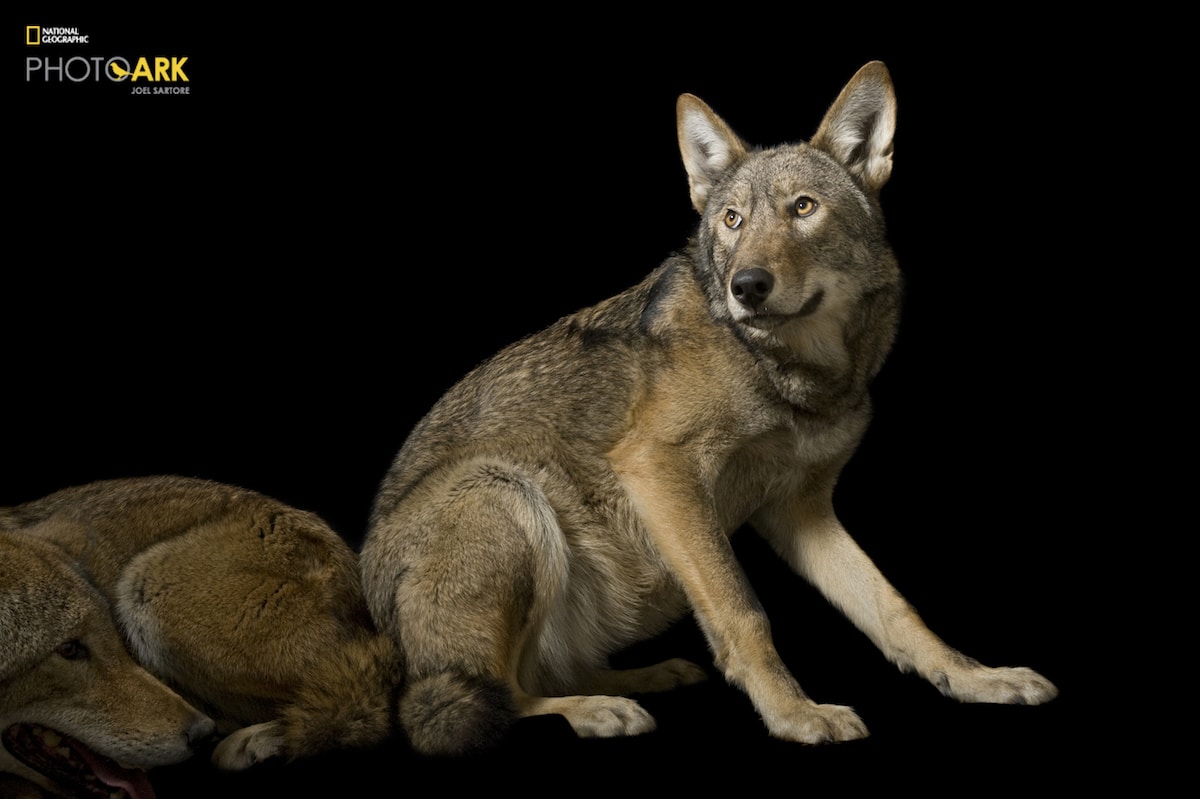 Do you remember the first animal you photographed?

For the Photo Ark, it was a Naked Mole Rat at the Lincoln Children’s Zoo, some 13 years ago.

Do you have any funny stories from shooting a particular animal?

Yes, and it’s become so well known we now call it, “The Chimp Incident.” This happened when I first started shooting for the Photo Ark, and was foolish enough to try to use white paper to do a portrait of Chimpanzees at the Sunset Zoo in Manhattan, Kansas. The shoot didn’t go well, to say the least. 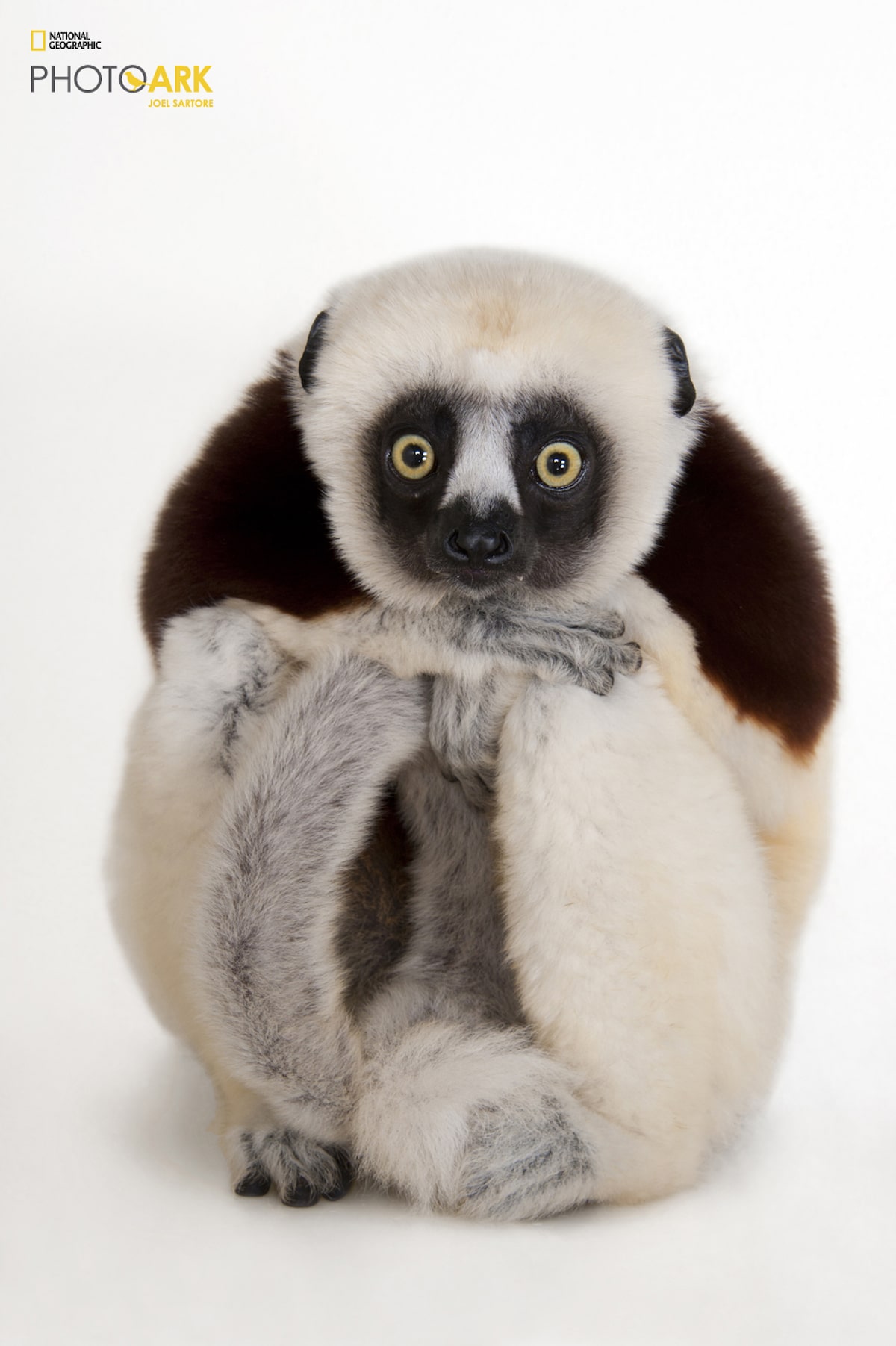 If you weren't a wildlife photographer, what do you think you'd be? 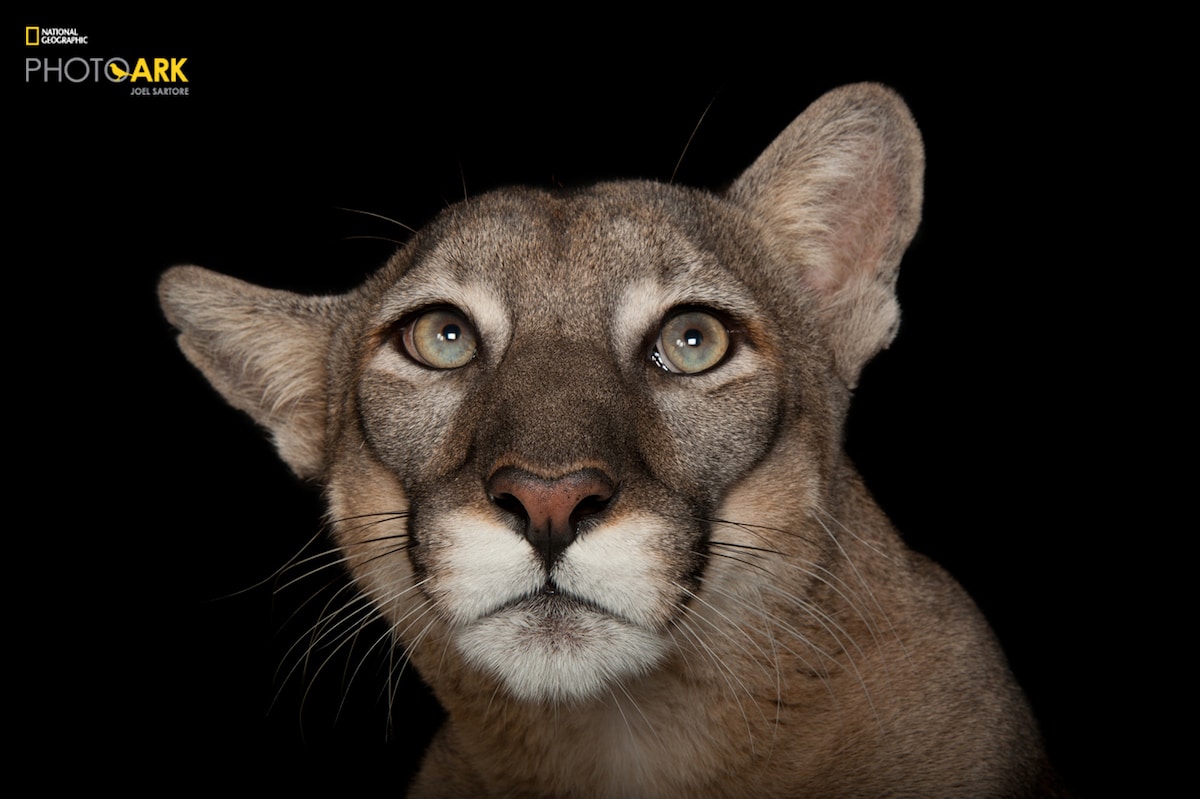 What can people do to help save some of the world’s most endangered species?

Hundreds of things, actually. First, support your local zoo or aquarium. They provide critical care for rare animals through captive breeding and habitat restoration in the wild. You can also donate to help support the Photo Ark and fund cutting edge conservation and habitat work around the globe featured in the exhibition at natgeophotoark.org.

Second, watch how you spend your money; drive a smaller car, and drive it less. Eat less meat or no meat. Insulate your home well. Dedicate some or all of your home and/or office landscaping to native plants in order to save pollinating insects, which we must have to create fruits and vegetables. And, above all, quit putting poison on your lawn, chemicals of any kind end up in the water supply and make everything (people, plants, and animals) sick.

Do you have new projects coming up?

The Photo Ark is going to take me until about age 70. That’ll be enough. 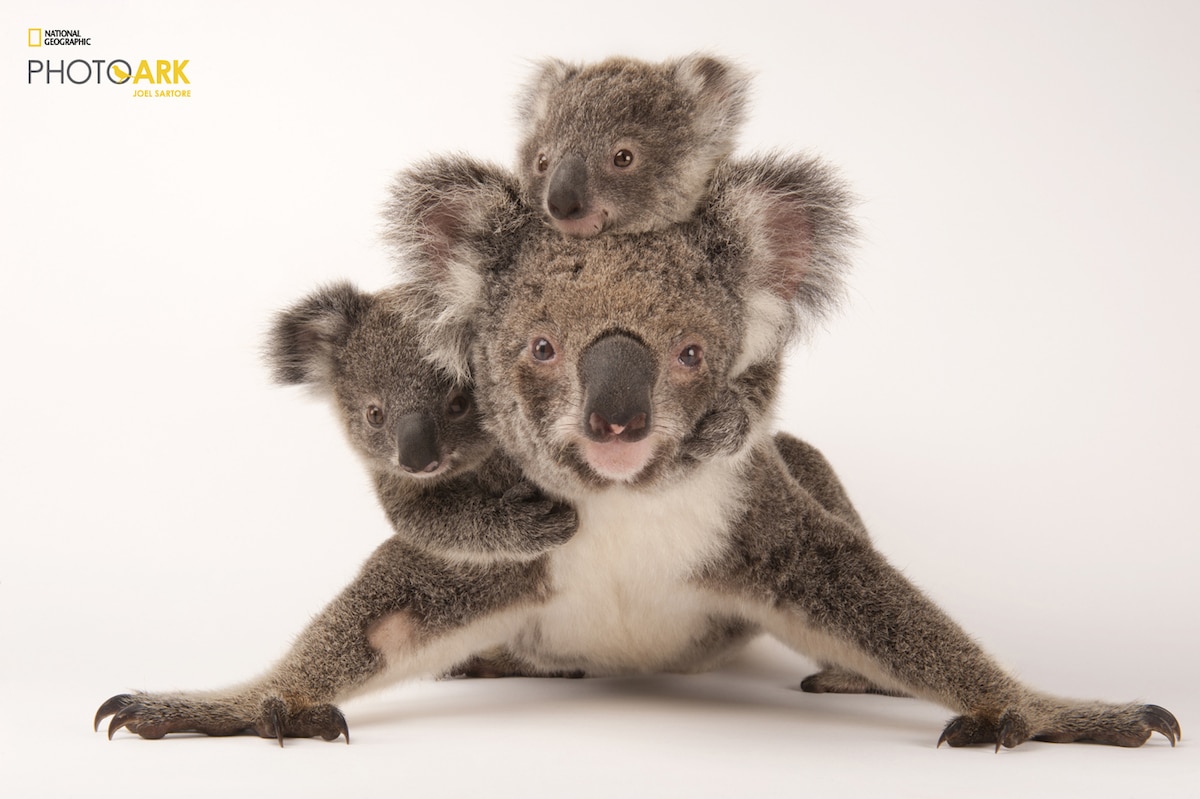 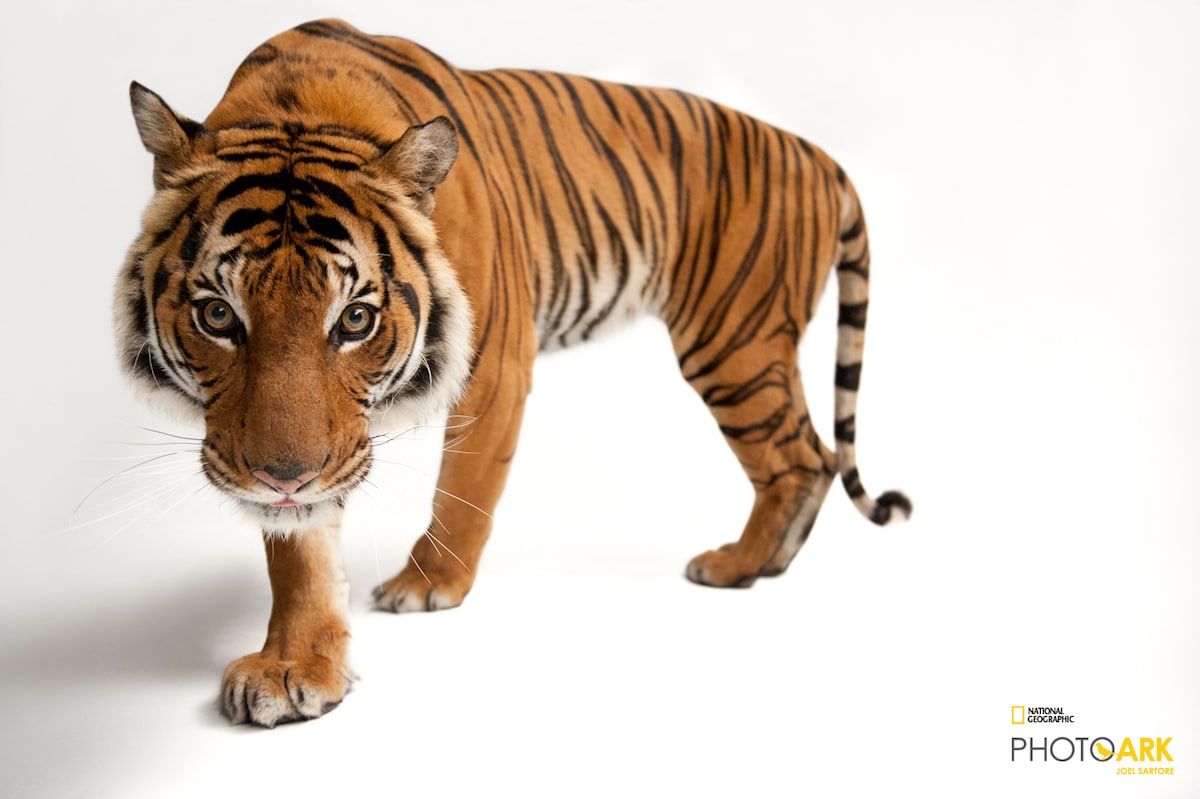 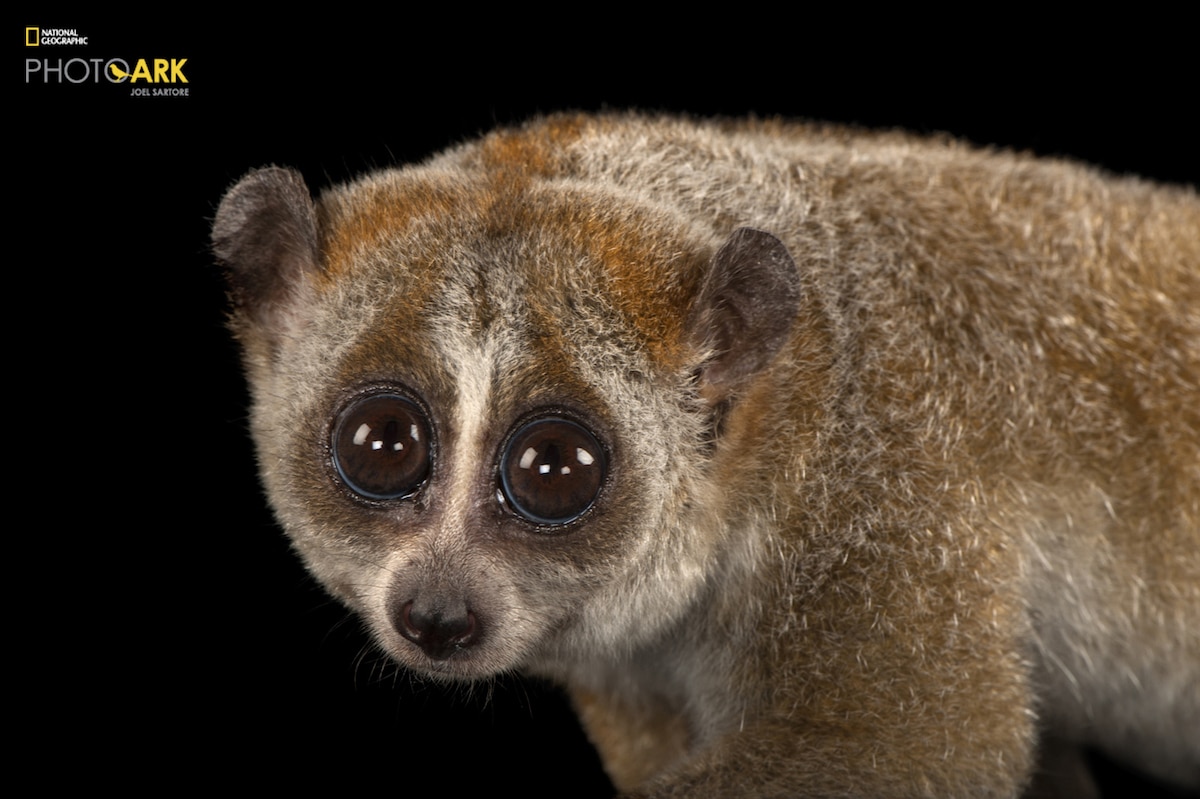 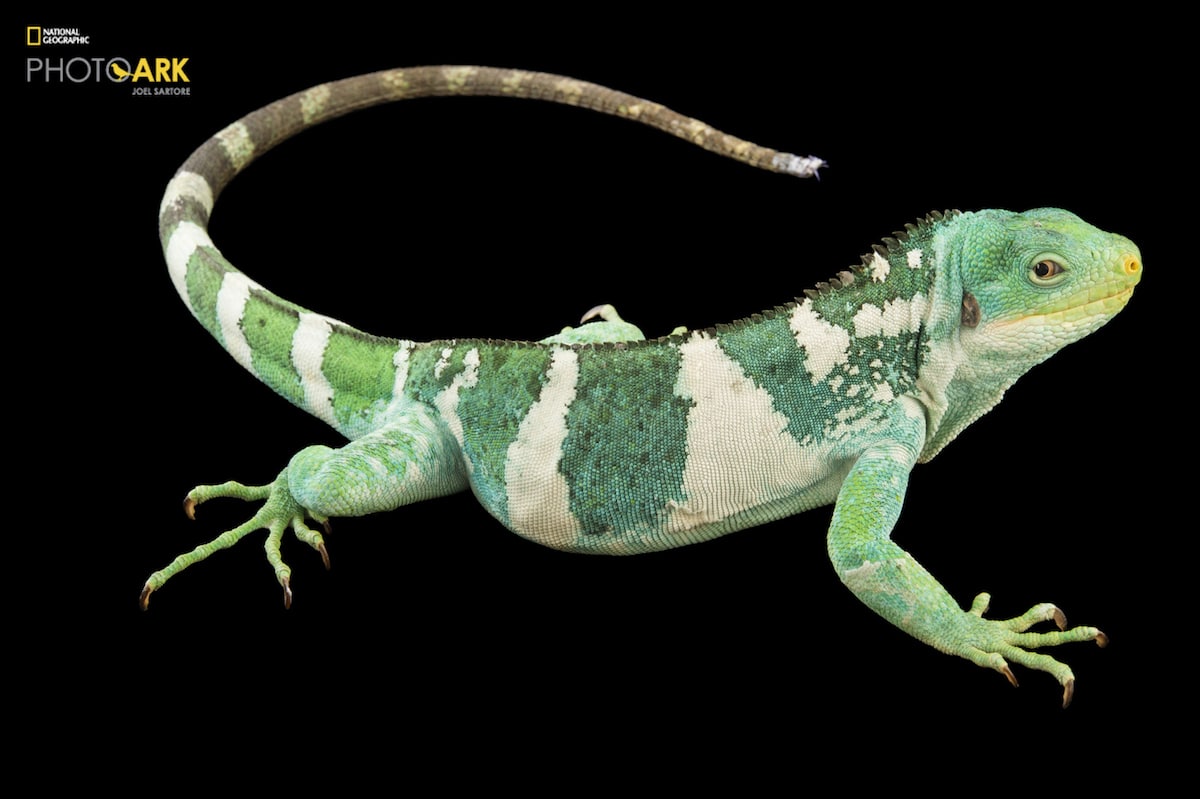 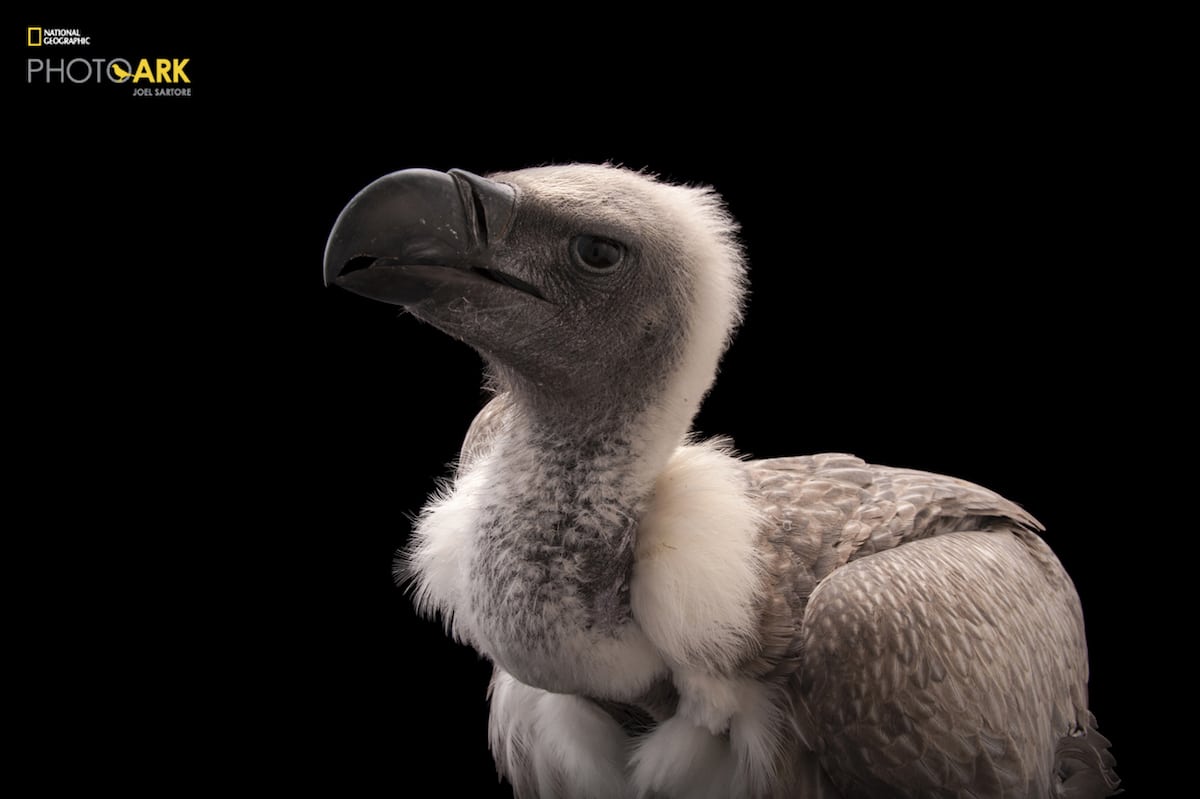 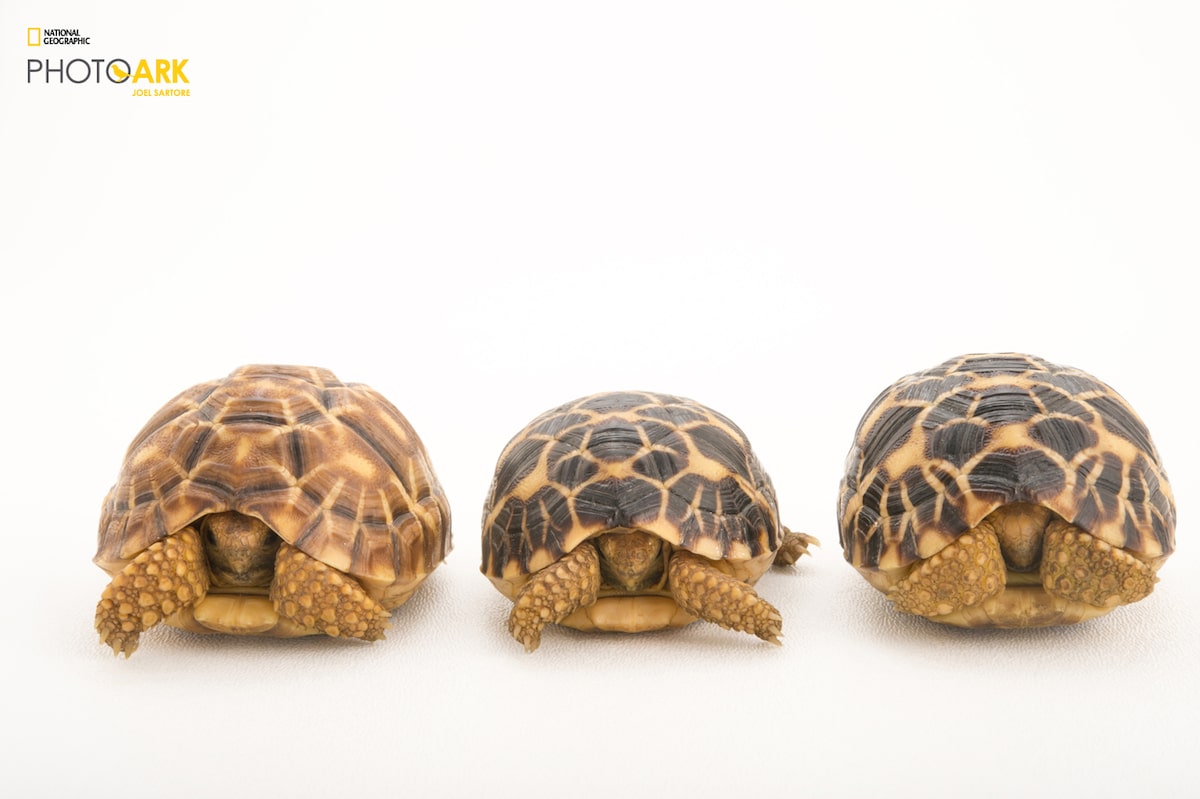 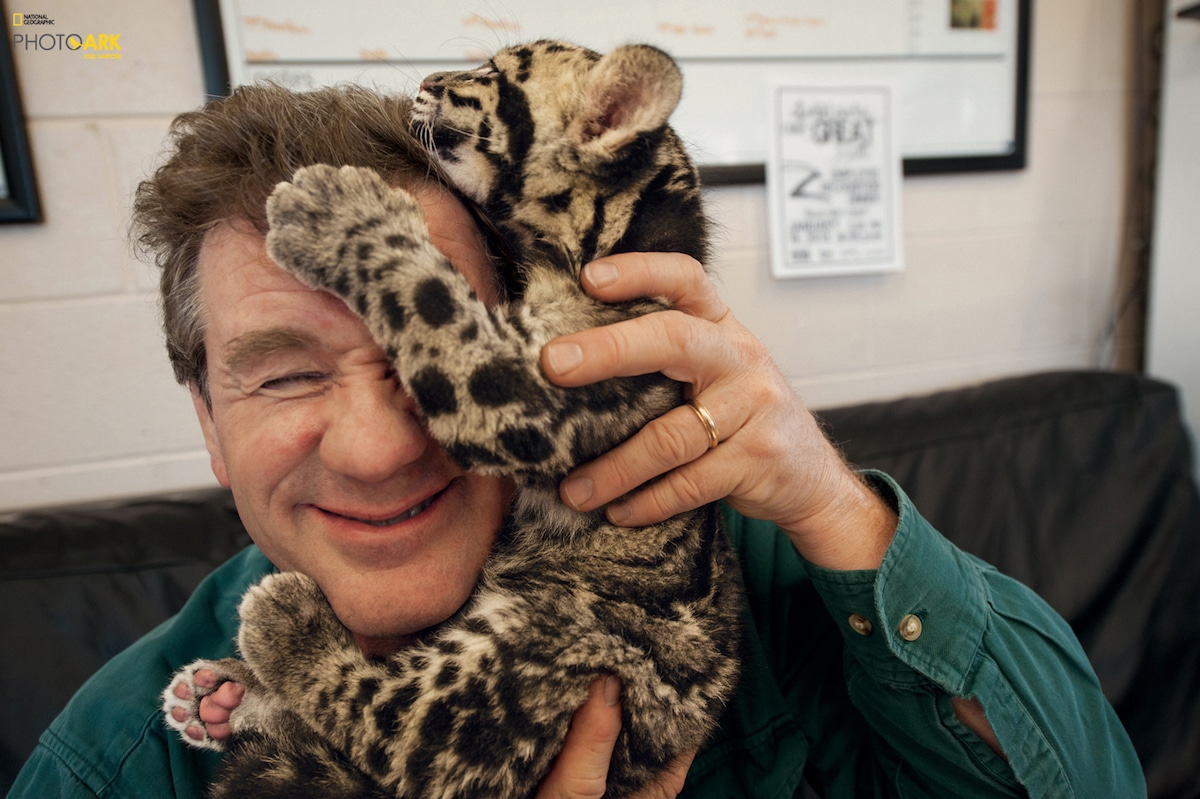 Grahm S. Jones, Columbus Zoo and Aquarium
After a photo shoot at the Columbus Zoo in Ohio, a clouded leopard cub climbs on Sartore’s head. The leopards, which live in Asian tropical forests, are illegally hunted for their spotted pelts.
© Photo by Joel Sartore/National Geographic Photo Ark 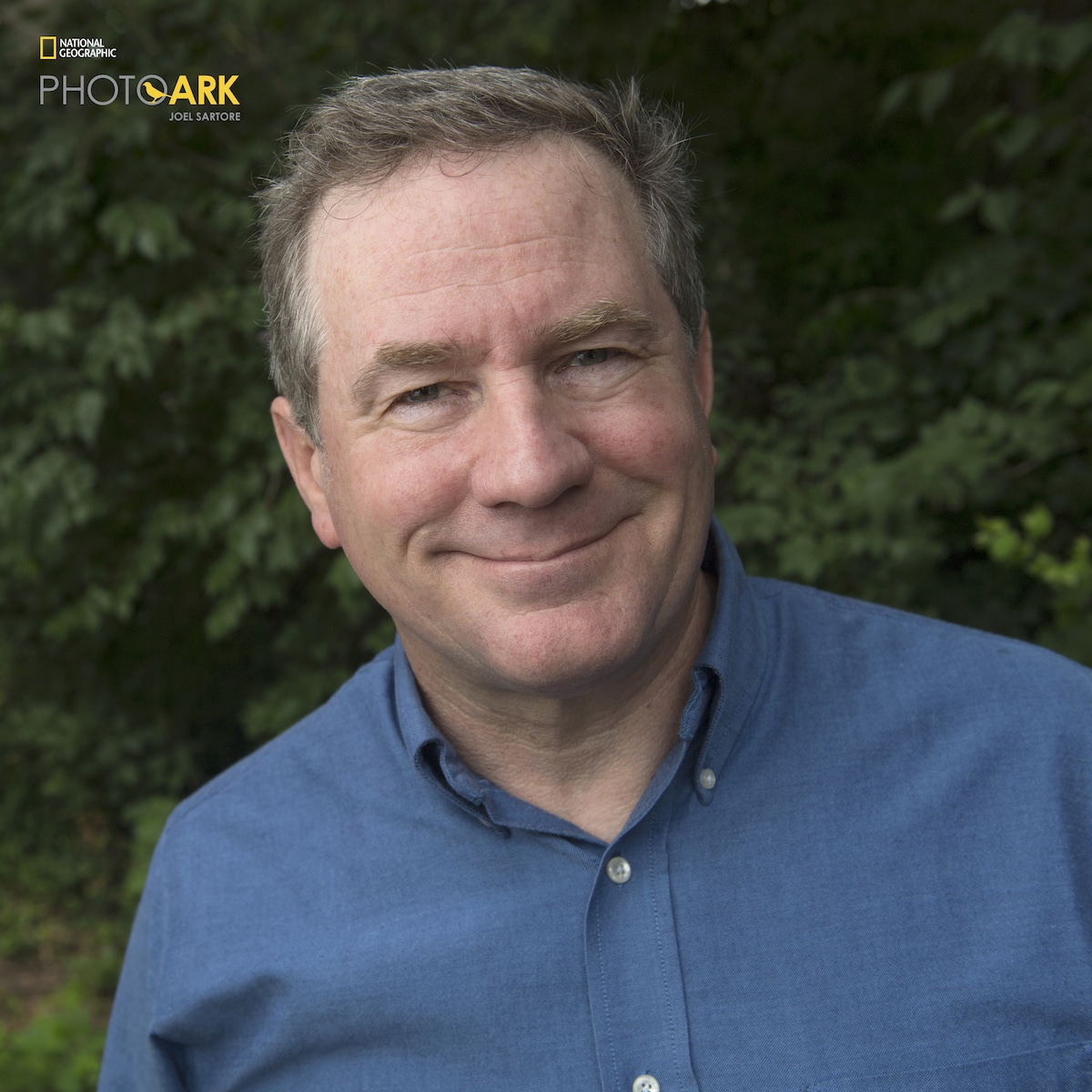 Photo by Cole Sartore
A portrait of Joel Sartore taken in Lincoln, Nebraska.

What do you think of this ambitious project? Share
Like My Modern Met on Facebook
Get Our Weekly Newsletter
Become a
My Modern Met Member
As a member, you'll join us in our effort to support the arts.
Become a Member
Explore member benefits