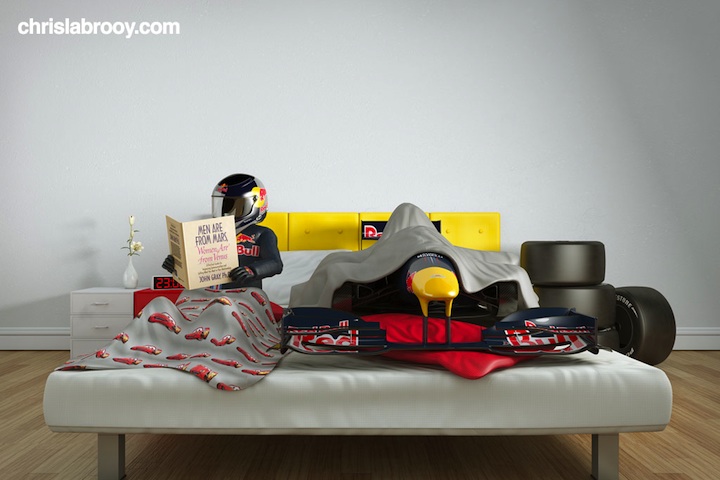 To try and capture the events surrounding last year's F1 circus, Chris Labrooy decided to make one hilarious set of 3D illustrations. The 2010 Formula One season ended with Red Bull Racing winning the Constructors' Championship with a one-two finish and Red Bull Racing's Sebastian Vettel snagging the Drivers' Championship after taking the final race of the season, the Abu Dhabi Grand Prix.

“I created this series for two reasons,” Labrooy says. “The races take place every two weeks all around the globe so I thought it would be cool to create some images to fill the gaps and entertain the fans. Secondly, I use this project to further develop my technical skills.”

Though Labrooy's creative images can be appreciated without knowing their back-stories, they're even funnier if you do. Below each of his sets, he explains to us what was going on during the world famous F1 extravaganza. 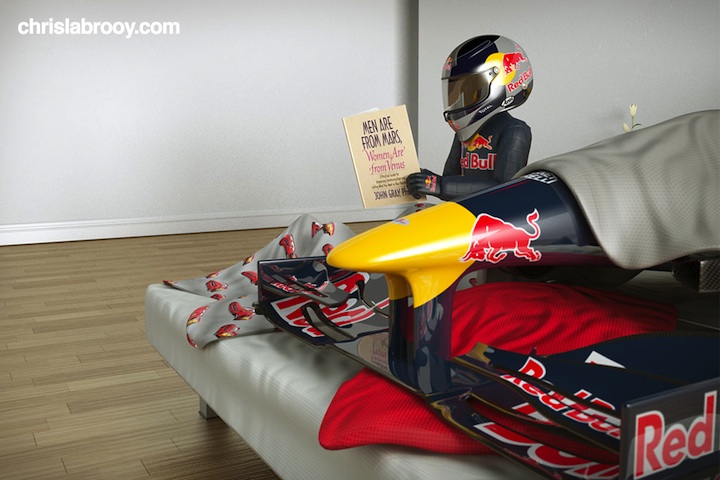 Sebastian Vettel makes a point of naming his cars for every new season such as “Randy Mandy”, “Luscious Liz” and “Kate's Dirty Sister” I thought it would be sweet to create an image that explores the bond between him and his beloved car. He had two successive races with mechanical failure so I thought it would be cute to use John Gray's book “Men are from Mars, Woman are from Venus” as a prop to highlight the difficulties in their relationship. Perfect nighttime reading. 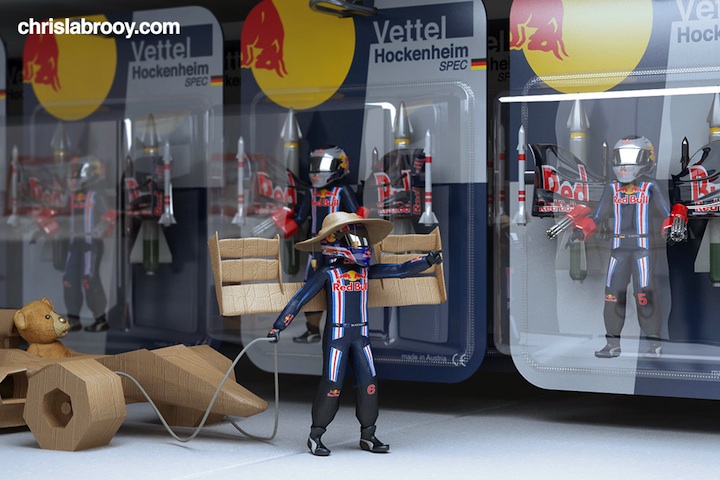 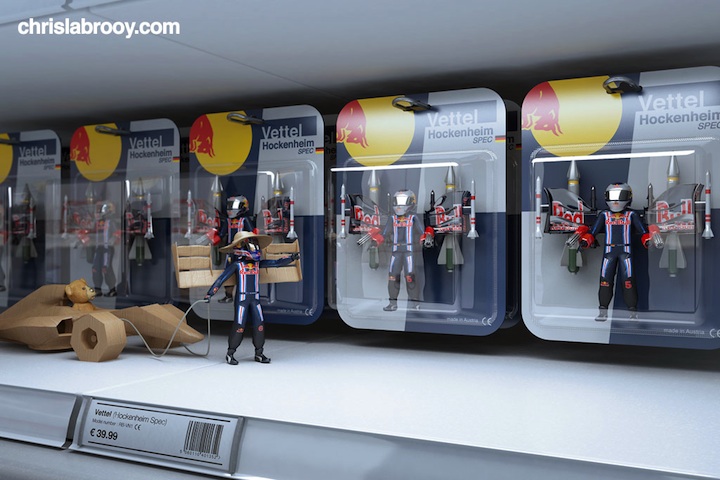 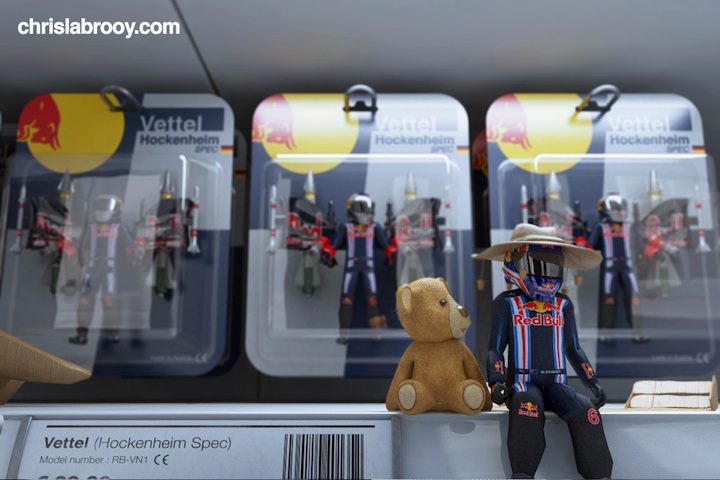 This one was about the inter-team politics at Red Bull as people were suspecting favoritism towards Sebastian Vettel over Mark Webber. During an F1 season the cars are constantly evolving with new parts being designed for every race. At the British Grand Prix, the team bosses removed a brand new part from Mark Webber's car and gave it to his teammate because his got broken. So, I decided to craft Vettel as a super toy with all the latest weapons (Buzz Lightyear) and Mark Webber as a just a standard old cowboy (Woody) with a little furry chum to console him. 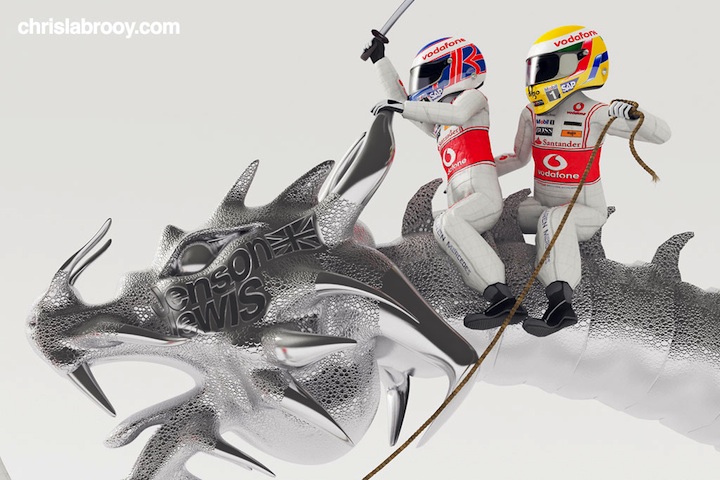 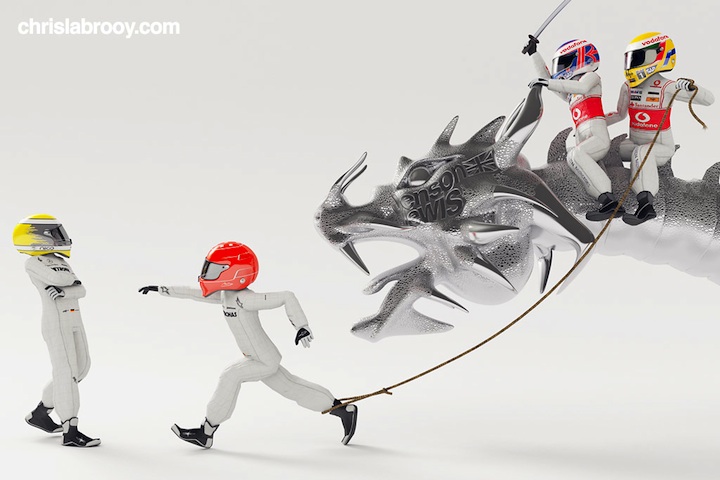 Just some stylish eye candy for the Chinese Grand Prix where the McLaren drivers, Jenson Button and Lewis Hamilton, scored a dominant one-two finish. Silver dragon placed in white studio environment with hints of bright red and yellow from their helmets and overalls. 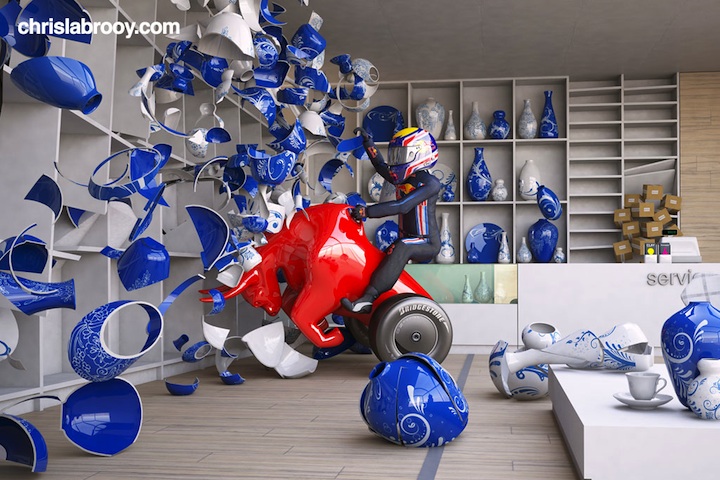 He's a tough Aussie sportsman with a reputation for being somewhat abrasive in wheel to wheel combat with the other racers. Basically he can be a bit of a “bull in a china shop” at times. 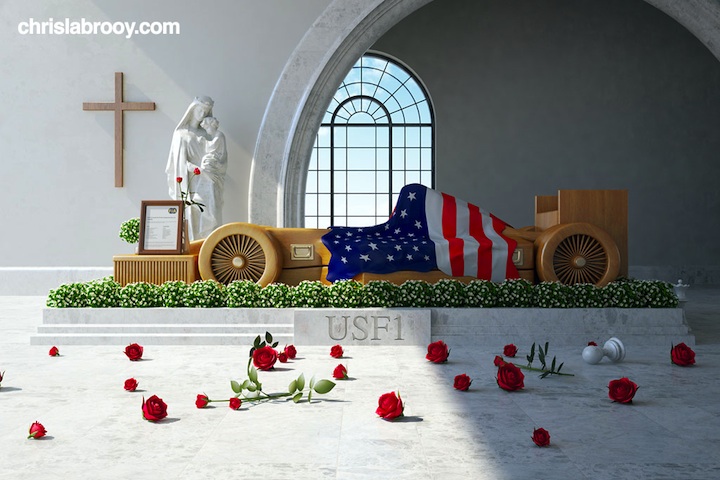 US F1 were granted entry to the championship in 2009 and while they were designing and building the car for 2010 they quite simply ran out of cash. I created a race car casket for the team's funeral….it was quite a sad affair really as it would have been great for the US to be more involved in F1.

If Labrooy's style looks familiar, he's also the one who created the architecture-inspired typography.