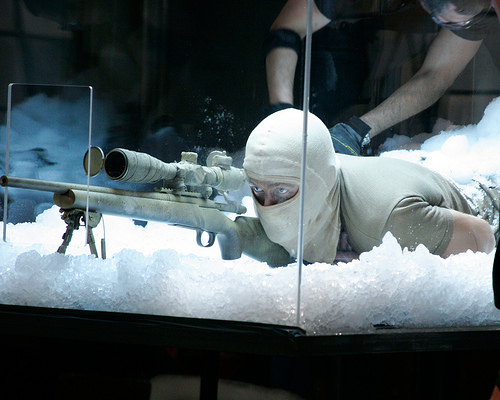 In our ongoing partnership with National Geographic, we present Fight Science – A fascinating look at the science and physiology behind the world's most powerful fighting techniques. FIGHT SCIENCE: ULTIMATE SOLDIERS Monday, February 1 at 10PM ET/PT

Special operations forces are an elite breed of soldiers with the ultimate military training, superior physicality and extraordinary mental ability, especially under stress. Watch as the Fight Science team of scientists pushes these legendary fighters past their breaking point. A sniper is challenged to shoot between heartbeats while enduring temperature extremes inside a glass box. An Air Force pilot and an Army Ranger are spun in a gyroscope to test their ability to fight spatial disorientation. And the team will push a Navy SEAL's water survival training to the limit by weighing him down in a pool. Watch as these special operations soldiers demonstrate the control of both body and mind that allows them to excel beyond most human limitations. FIGHT SCIENCE: FIGHT LIKE AN ANIMAL Thursday, February 4 at 9PM ET/PT

For centuries, martial artists have been inspired by the animal kingdom. But can a human strike as fast as a snake, be as nimble as a monkey or as powerful as a tiger? The Fight Science team tests whether kung fu experts stack up against their animal counterparts. High-speed video cameras compare the striking speeds of human fighter and rattlesnake. A martial artist uses a crane technique to test his exceptional balance on a set of steel poles, each topped with a pedestal the size of a dinner plate, while pressure sensors in his shoes show how his weight is distributed. Then a mantis kung fu expert is challenged to catch flies like his insect inspiration. Finally, we see a demonstration of the fearsome, flesh-tearing Tiger Claw attack – and witness the shocking results on a dummy designed to react like the human body.