Always creating art from his own imagination or memories, Spanish artist Joan Miró expressed his childlike sense of play by experimenting without limitation. His signature abstract shapes, biomorphic forms, and pure colors help develop his unique body of work that ranges from paintings to large bronze sculptures to ceramics.

Although Miró is often associated with early Surrealism and had an influence on Abstract Expressionists and Color Field painters, he remains one of modern art‘s most radical artists with a visual vocabulary that’s unmistakably his own. Read on to discover seven famous Joan Miró artworks that show how his artistic practice evolved over his long career.

Packed full of animals, farm equipment, and plants, The Farm depicts a view of Miró’s family property in Mallorca. The artist’s paintings during this time were often described as “detailist” due to the sheer amount of motifs and elements he fit onto the canvases. Miró explains, “The Farm was a résumé of my entire life in the country. I wanted to put everything I loved about the country into that canvas—from a huge tree to a tiny snail.”

Miró considered The Farm among his most important works, as it marked a turning point in his style. Featuring references to both Catalan folk art and Cubism, this hybrid-style painting was made shortly before Miró turned towards Surrealism. 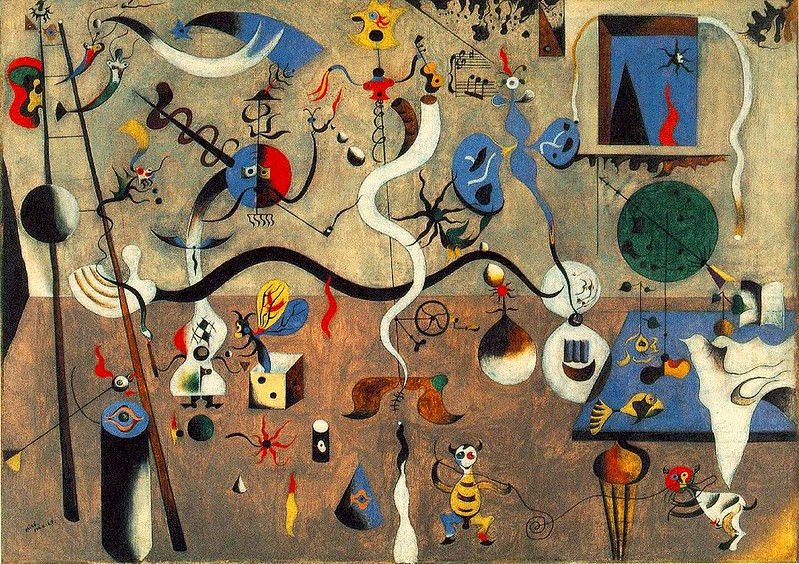 Harlequin's Carnival is an early example of Miró’s surrealist works, and it also features some of the artist’s first biomorphic forms. It depicts a festive, crowded scene where abstract characters seem to be caught up in a celebration. The figure depicted in the central-left portion of the canvas—with a half red, half-blue mask and diamond pattern on their tunic—references Italy’s commedia dell’arte. In this form of theater, the harlequin is a foolish character who is constantly unsuccessful in love. The hole in the character’s stomach perhaps references Miró’s own hunger and poverty at the time he created the painting. He once reported, “I used to come home in the evening without having eaten anything.”

Depicted playing and dancing, the other characters throughout the composition seem to be having a wonderful time. There are even music notes that appear to float in the air like living beings. Many art critics believe this painting captures the human subconscious mind and was a way for Miró to visualize some of his own life experiences. He once explained some of the painting's symbolic meaning, stating that the black triangle at the window symbolizes the Eiffel Tower and the ladder to the left-hand side of the painting stands for both elevation and evasion. 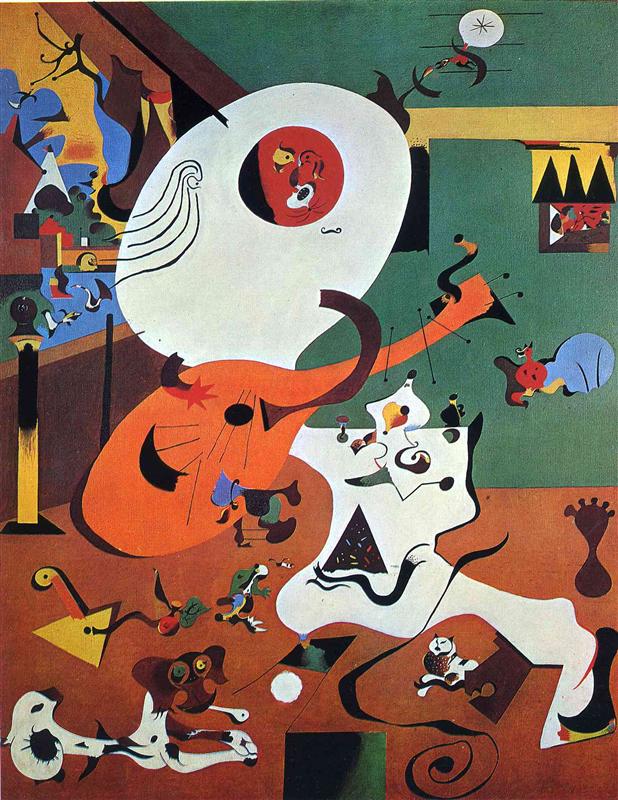 Dutch Interior I is based on a 17th-century painting by Hendrick Martensz Sorgh that depicts a lute player. This work is the first in a series of three that Miró painted after visiting the Netherlands for the first time in 1928. The artist bought a postcard reproduction of Sorgh’s The Lutenist at the Rijksmuseum in Amsterdam a few months prior to beginning his own version.

The painting features a very basic, abstract form of a man playing the guitar. The man's body is a huge white blob with no recognizable body parts. However, the top of the figure features a red circle, representing the face. A dog also sits at the character’s feet. Art critic Karen Rosenberg once wrote, “presences become floating, Surrealist apparitions—unmoored and ambiguous but still mischievous,” becoming “a giddy fantasia in green and orange, with the lute player as a kind of Pied Piper to various birds and beasts.”

From 1925 to 1928—under the influence of the Dadaists, Surrealists, and Paul Klee—Miró painted a series of “dream pictures” and “imaginary landscapes.” In Dog Barking at the Moon, a colorful, distorted canine stands on brown earth, looking up to the half-moon and bird above him. The subjects create a playful mood, but the dark colors and empty space evoke a sense of loneliness. A ladder reaches up to empty space, perhaps representing Miró's climb to success. Art critic Laura Cummings wrote that the “quasi-cubist space, tilted upright; and presumably because Miró is celebrating the thriving upward growth of home.”

The Beautiful Bird Revealing the Unknown to a Pair of Lovers, 1941

In 1939, during the outbreak of World War II, Miró fled Paris with his family to a small village in Normandy that often experienced blackouts. He wrote, “I had always enjoyed looking out of the windows at night and seeing the sky and the stars and the moon, but now we weren't allowed to do this anymore, so I painted the windows blue and I took my brushes and paint, and that was the beginning of the Constellations.”

The series of 24 paintings on paper brought illustrative form to Miró’s emotions and helped him cope with his difficult life circumstances at the time. He said, “When I was painting the Constellations, I had the genuine feeling that I was working in secret, but it was a liberation for me in that I ceased thinking about the tragedy all around me.”

The Beautiful Bird Revealing the Unknown to a Pair of Lovers depicts a complex constellation against the night sky. There are signs, planets, stars, and eyes that populate the canvas among a dizzying swirl of black lines.

Miró's three large-format paintings Blue I – III are part of a series of triptychs that he painted at the beginning of the 1960s in his studio in Mallorca. He was internationally famous at the time, and perhaps the enormous scale of the three 12 feet by nine feet canvases was a bold representation of his confidence.

Miró often used large fields of blue in his work, as he identified the color with the sky and also with the world of dreams. The dramatic, diagonal red stroke adds contrast, emphasizing the vacant space, while a series of blurred and black round shapes drift across the middle of the canvas. The symbols entice the viewer, but ultimately the intense blue hue dominates the canvases. These paintings capture Miró's feelings, as he wrote, “The spectacle of the sky overwhelms me. I'm overwhelmed when I see, in an immense sky, the crescent of the moon, or the sun. There, in my pictures, tiny forms in huge, empty spaces. Empty spaces, empty horizons, empty plains—everything which is bare has always greatly impressed me.”

Miró turned to sculpture in the 1940s. “It is in sculpture that I will create a truly phantasmagoric world of living monsters,” he said. “What I do in painting is more conventional.” Pájaro lunar (Moonbird) depicts a hybrid creature with a moon-shaped face and horns as well as two arms that resemble wings. The three-dimensional form references the tradition of Spanish bullfighting, giving a nod to his Catalan heritage. Sculpted by hand from bronze, the piece shows evidence of that artist’s hands on its surface. In the 1960s, Miró enlarged the original piece to make cast replicas, which can be found in museums and sculptural parks throughout the world.