Interview: How an Illustrator Uses “Uncertainty” to Construct His Own Fantastical Worlds 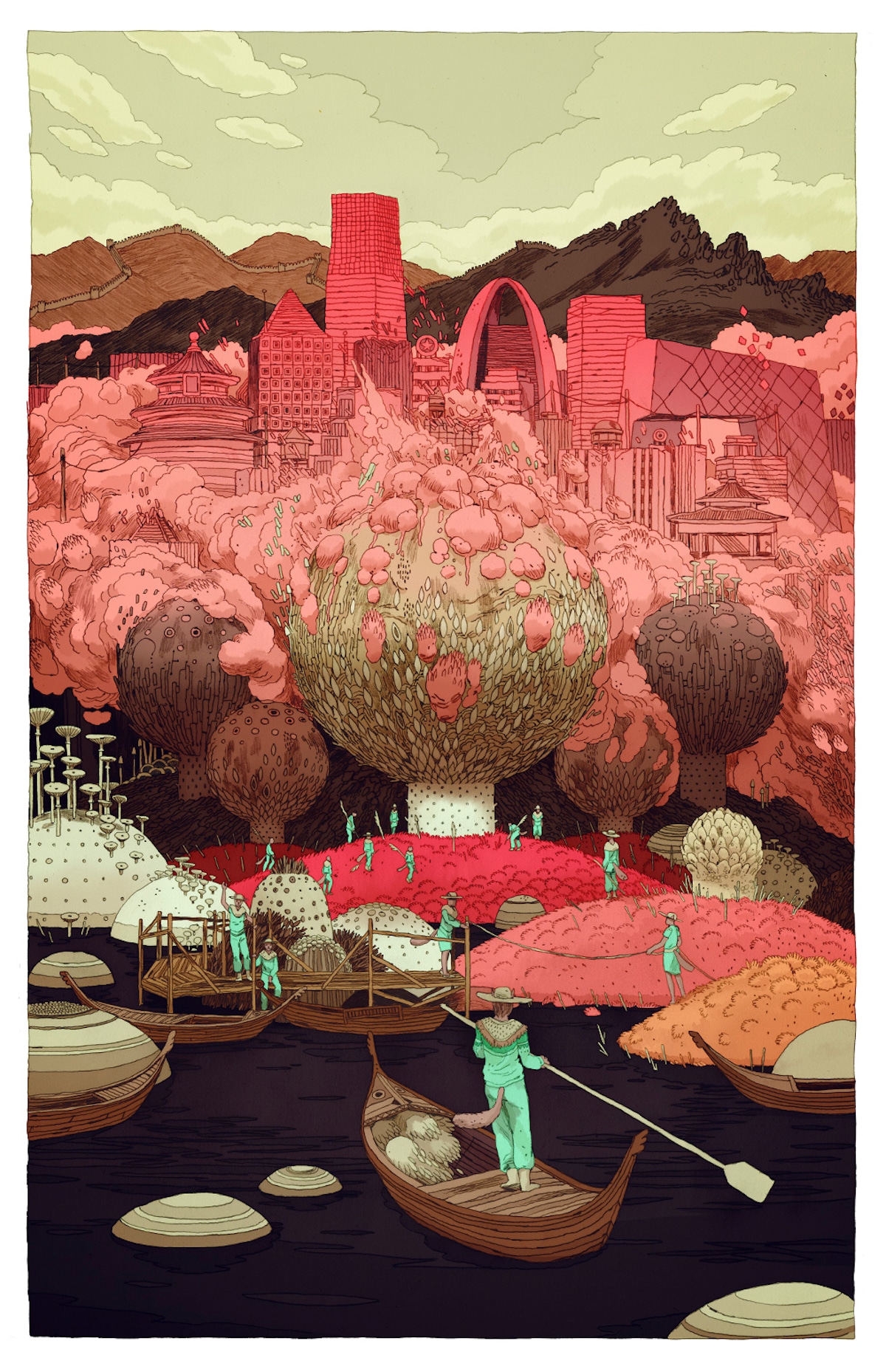 Illustrator Jon Juarez is driven by ideas. His fantastical illustrations of locales, which sometimes appear familiar and other times foreign, come from thoughts that were once only in his head. Through years of practice and honing his craft, he has learned to express his creative visions, and they now take the form of elaborate compositions that boast meticulous details.

Many of Juarez’s works are based on real places, but they always have a surreal twist that takes them out of the realm of possibility. An otherwise ordinary cityscape, for instance, will feature streets that morph into a bustling waterfall. Or with other illustrations, tranquil scenes are flanked by unidentified polygons that cast a watchful eye over the inhabitants. Each piece is beautiful in its delicate lines and use of color, and they are made alluring thanks to these strange elements.

Juarez is a self-taught illustrator who knows the value of hard work, even when a drawing doesn’t go according to plan. He describes the feeling this evokes, and it's one that any creative is sure to recognize. “It is as if they [the drawings] had a life of their own and were trying to take you down, to bring out the very worst in you,” he tells My Modern Met. “Such works are the ones you learn from. When a project does not perform as expected, I just leave it for a bit. Then, when I figure out how to fix it, the whole process turns into a lesson.”

We had the pleasure of speaking with Juarez about the evolution of his work and inspiration, including the importance of how a short clip in the movie Kill Bill became a driving force in the style of his illustrations. Scroll down to read our exclusive interview. 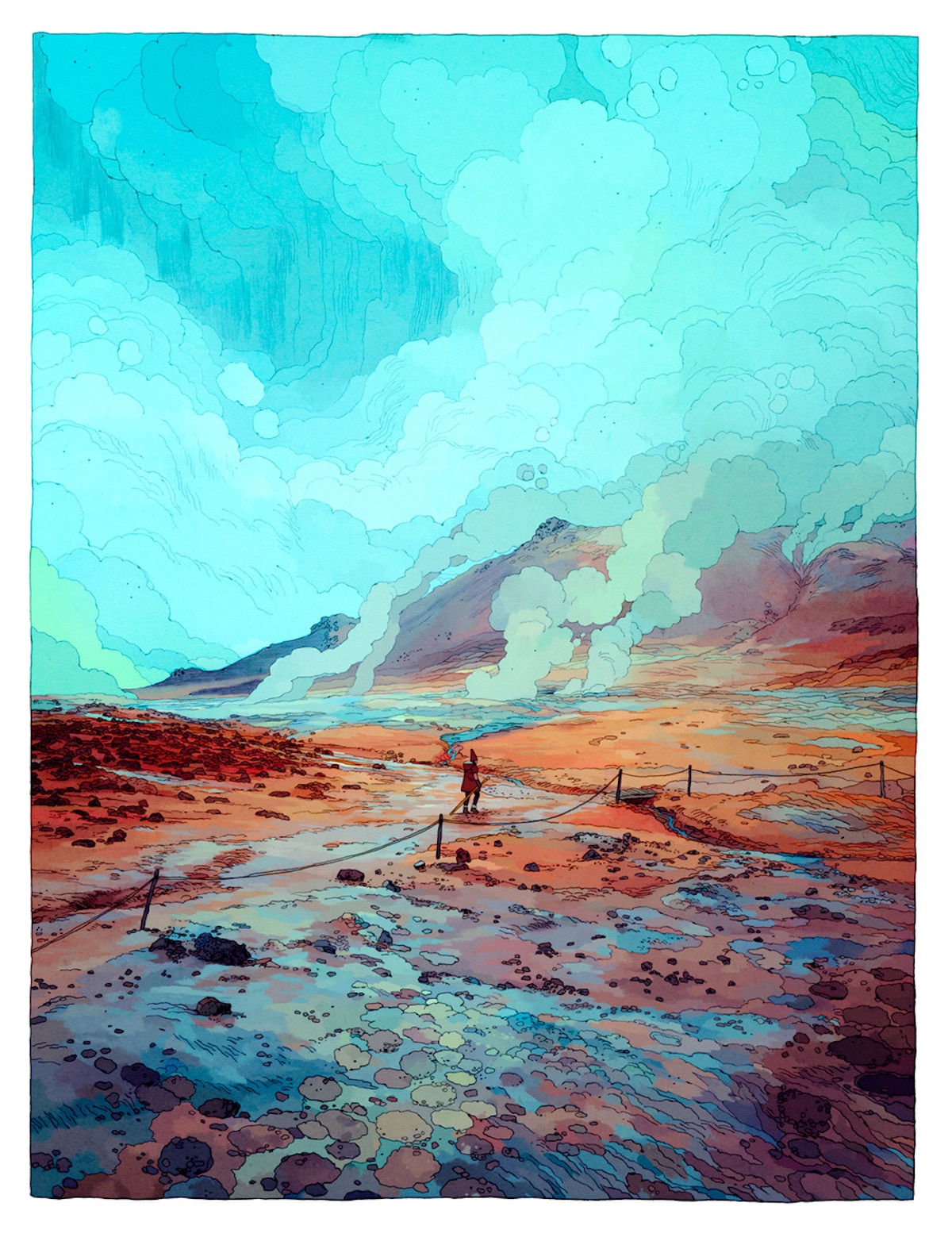 How long ago did you start drawing?

I first tried to in 2003, but it barely lasted for a month. I later took it up when I attended a course on 3D animation in 2010. I worked on an animation movie during summer 2011, and by the following year, I was already working on my own, as a freelance illustrator.

What inspired you to start drawing?

Drawing is a tool for thinking, and so is writing, music, movement, et cetera. It is often said that the drawing supports the text, or that it works according to the text, or that the artist works for the script. Those are just clichés aiming to hierarchize one discipline over another. But really, writing, movement, drawing… they are tools that are due to the idea, to the emotions, to the impulses, and to our ability to give them meaning. When we choose a tool to define an idea, we choose the tool that we [are better able] to express it, and this tool, in general, is usually the word, because it is simple and economic, [but that] does not mean it's the most powerful. The movement, the sport, for me, is a language as valid as the word.

When I have an idea, my job is to discover which are the tools that I have the best skills to define that idea. Or know who I can convince to help me with their skills to define an idea better than me.

Years ago I had an idea. I knew I could not convince anyone to draw it, so I tried to master that tool. I have spent 10 years learning, and in the end, I have professionalized my own learning. But I've always understood it as a gym, my goal is not the illustration. The ideas I have do not depend on a single tool, or on a specific combination. I'm not a cartoonist, I'm not a writer, I'm not a carpenter… I just want to make some [stories], and define them as best I can. 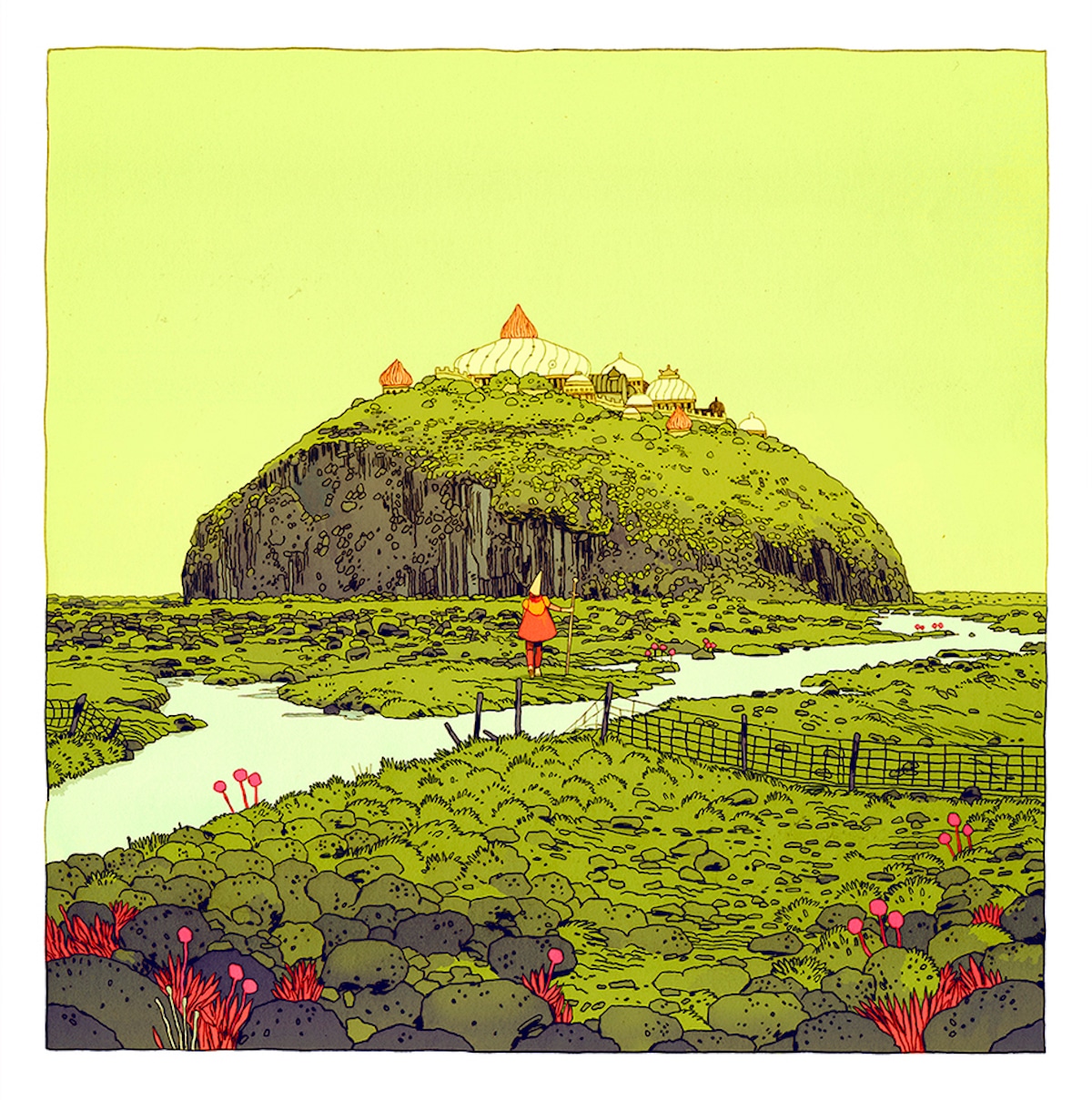 What resources did you use to learn?

The piece of animation in Kill Bill was revelatory. Poor old Tarantino gave me goosebumps, and until that moment I did not imagine what a piece of animation could do for my goose skin. I was looking for a specific style, so I opened the scene in Quicktime, broke it down into frames and kept re-watching them, one by one like a little child would.

I usually get told that Moebius’ influence can be appreciated in my work, but it still sounds weird to me, because I do not own any books by him, though I do have a Moebius board on Pinterest. It is, I believe, an author that managed to sneak into popular culture. It is somehow impossible to avoid him, even though one may not be consciously considering his work. He furthermore was able to gather multiple Aztec sources, and that’s an artistic landmark that we, as creators, share; we cannot draw a cone-shaped hat without being told: “it looks like Moebius.”

Now I have a lot of references from contemporary authors to whom I pay more attention, but as I said before, I'm more interested in ideas than in techniques. 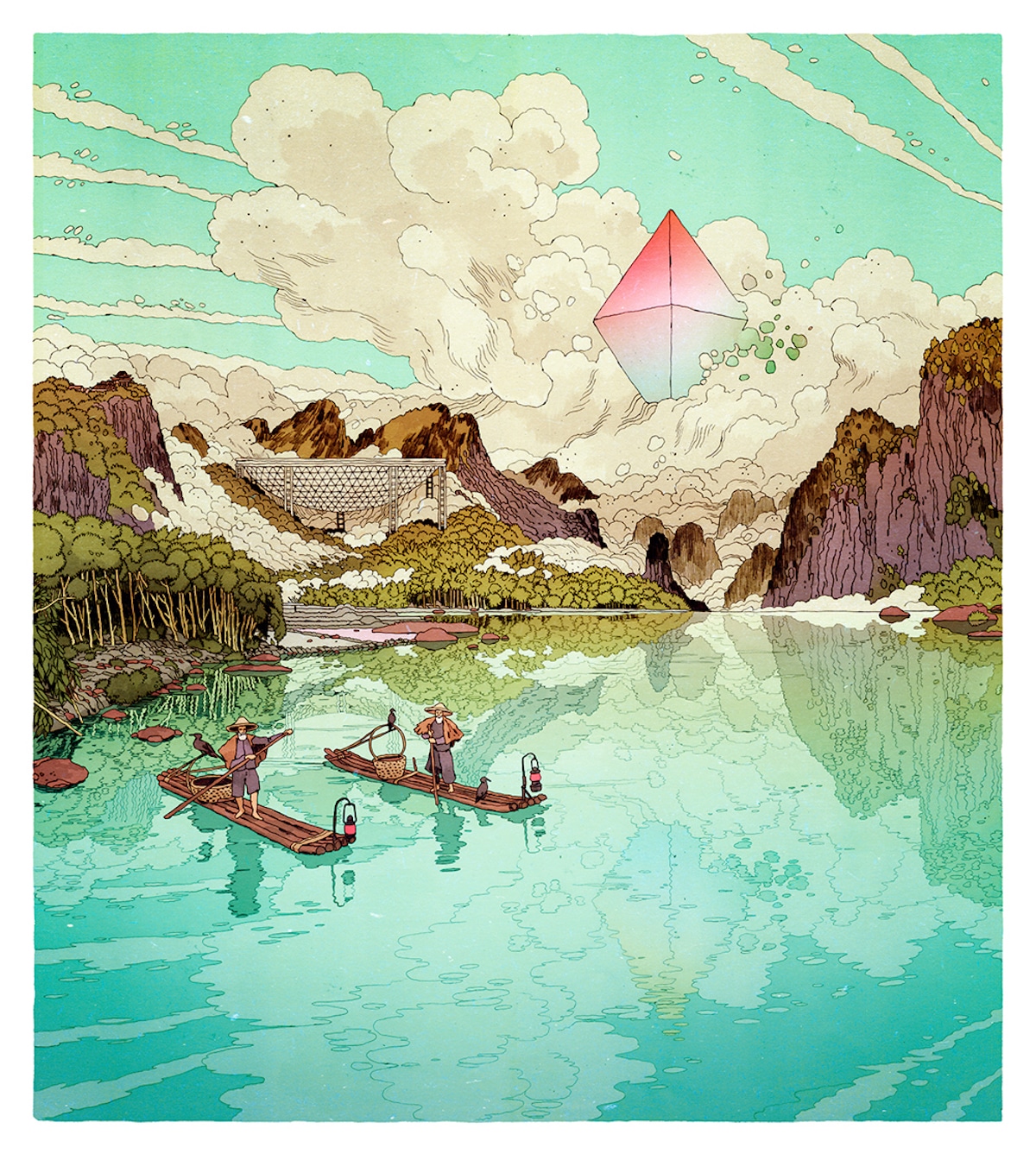 On inspiration, you’ve said that “uncertainty” is one source for your work. How do your illustrations reflect that influence?

Well, when someone asks me about my work, they are invariably referring to such illustrations that I made public on my website, commissions, largely. When I’m dealing with a commission, I try to be practical, to sort it out as rapidly as possible, and yet to create a universe of my own, one I feel identified with, so I can hold on to something. When I mention “chaos,” “uncertainty,” I am referring to separate processes that are not public, or to personal projects. In this regard, I am interested in whatever I do not agree with, in those ideas that prevent me from taking a consistent stance and that make me question my own point of view. I am talking about questioning yourself, your circumstances.

Your work focuses a lot on strange places we’ve never seen before. What is the process for developing these microcosms?

I have always fantasized about being a nomad, but I am a parent of two girls now, and I think they demand certain stability. I’m spending a lot of time in front of my computer, so, if I am not able to physically travel, I hope to at least get far away through fiction. 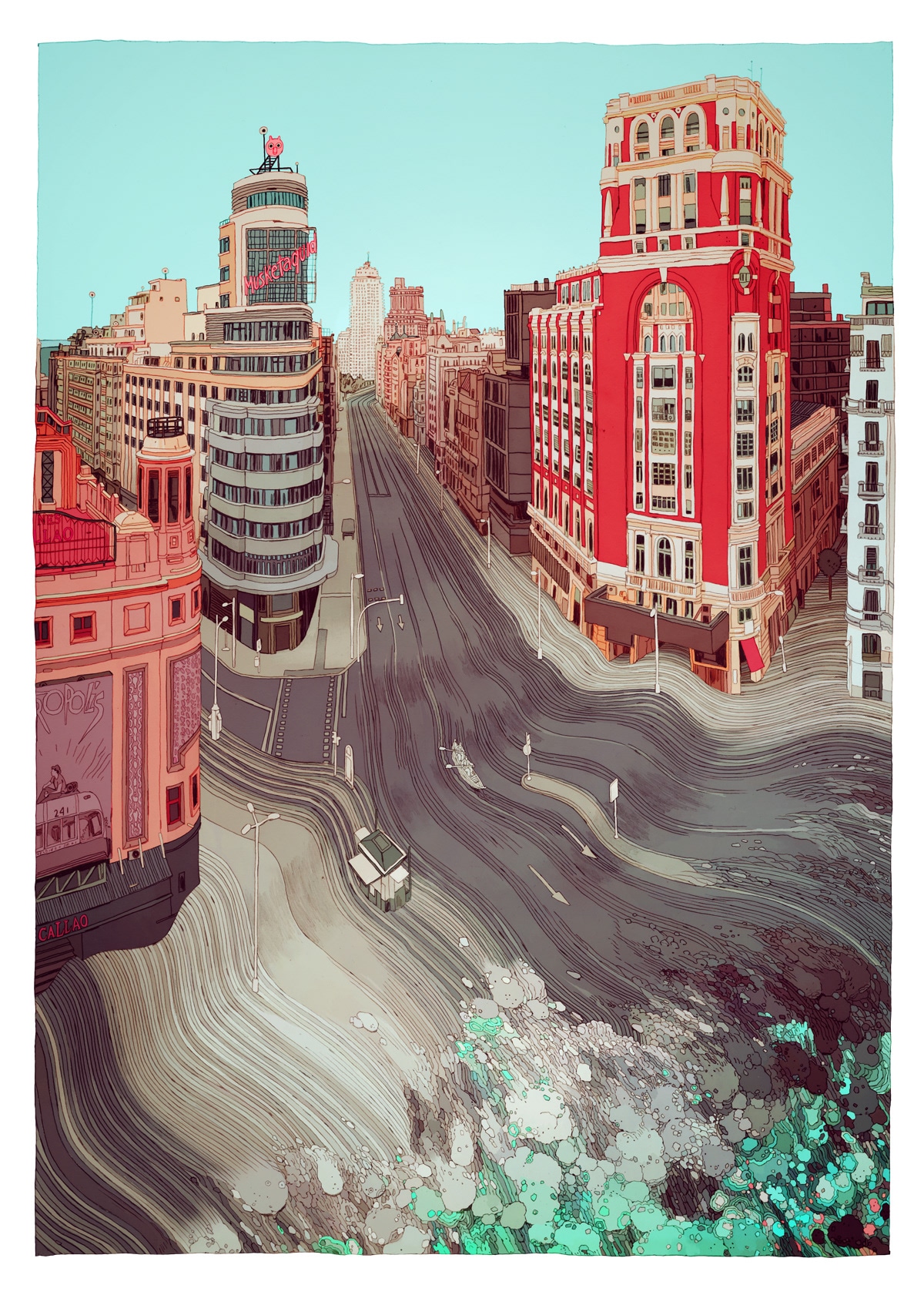 What is your favorite thing about creating unknown places?

I’m interested in “world-building.” I like each universe to respond to its own rules, new ones. My dream is being Le Corbusier, being allowed to design a region, a village… a social structure. During 2018, I engaged in designing speculative futures for a big telecom company. That may have been the closest I will ever get to my objective, though I did not have enough space to work from the perspective I keep in mind.

Any exciting projects on the horizon?

Hmm… the horizon is always there, I’ll let you know when I get to it. 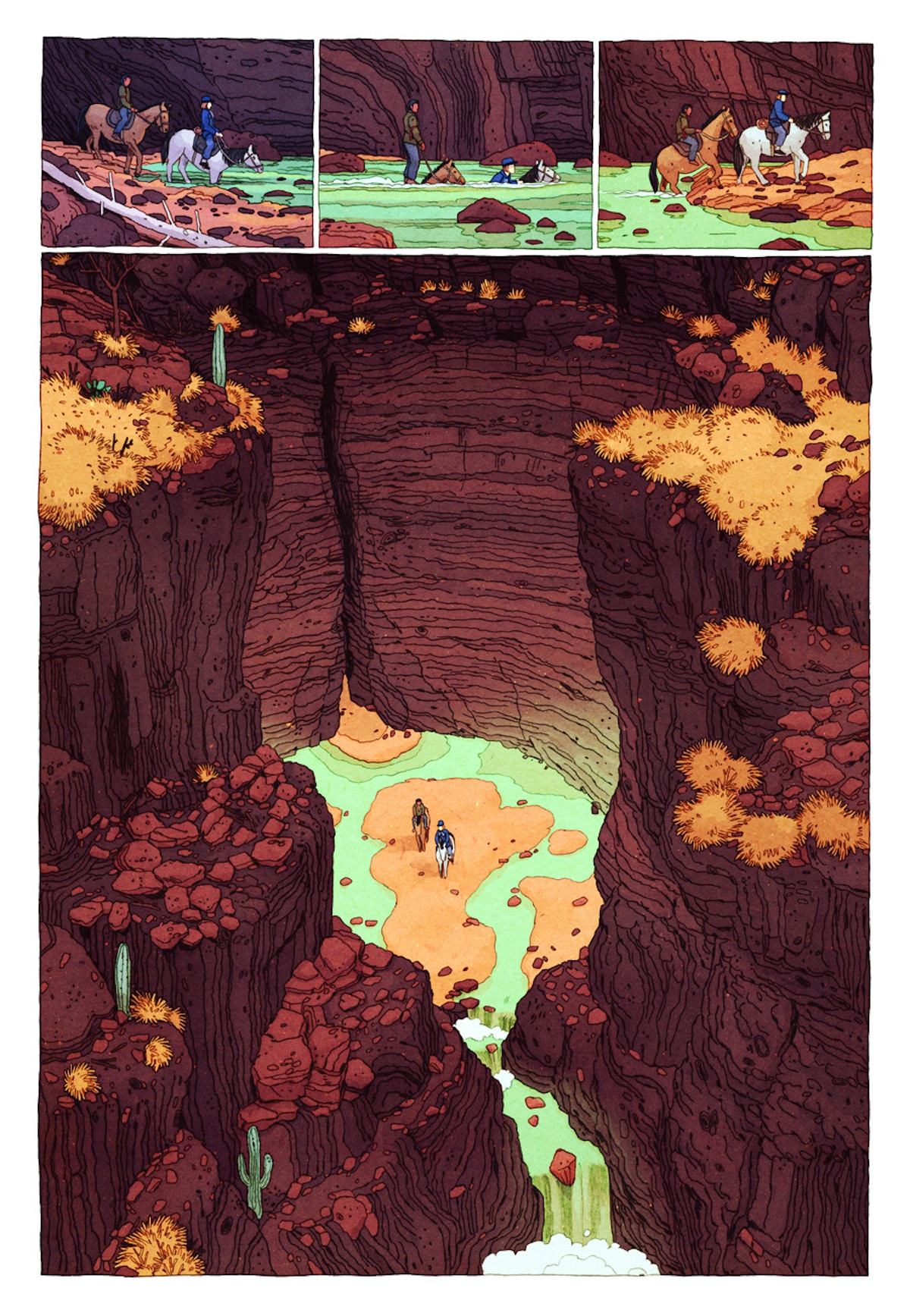 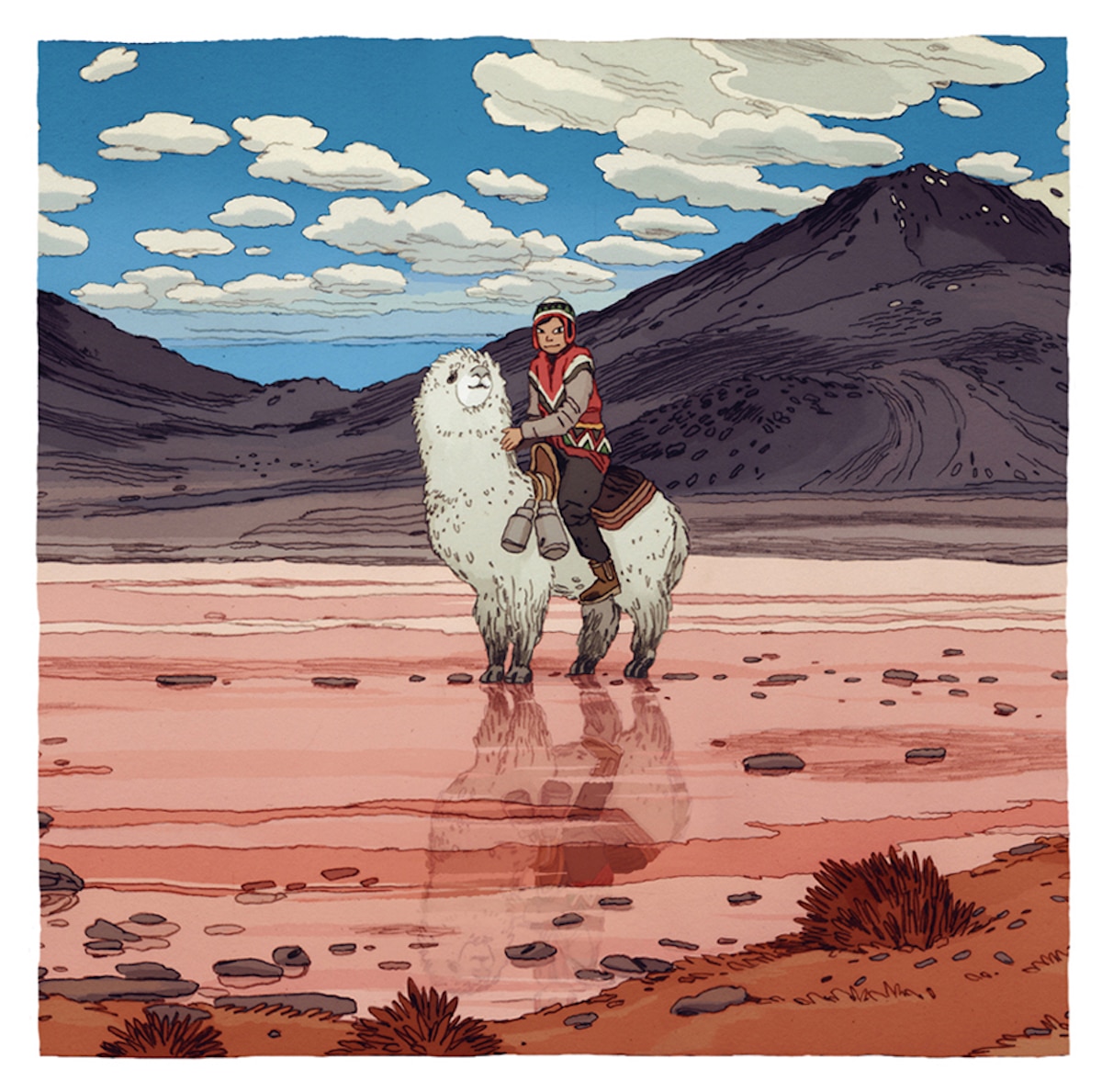 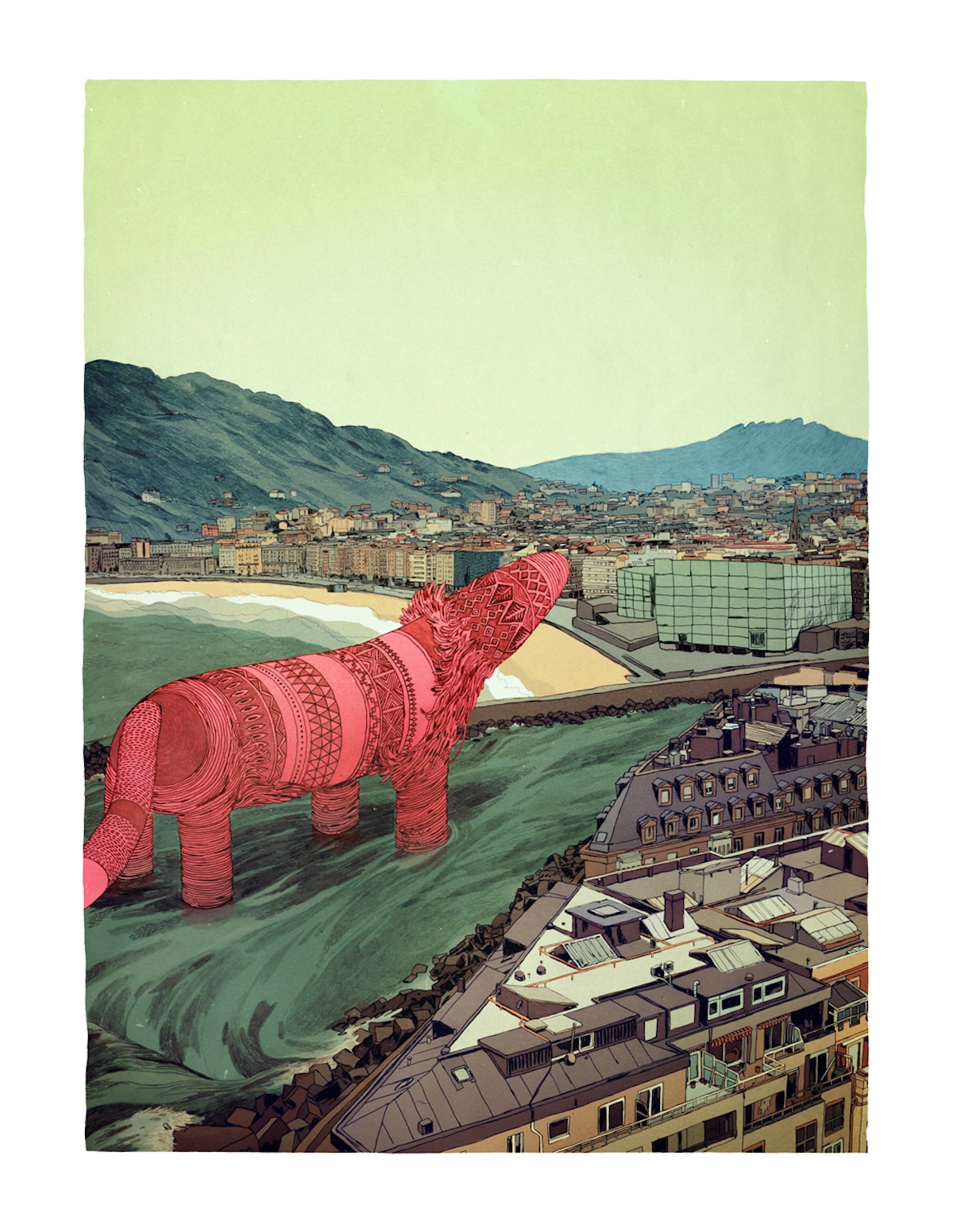 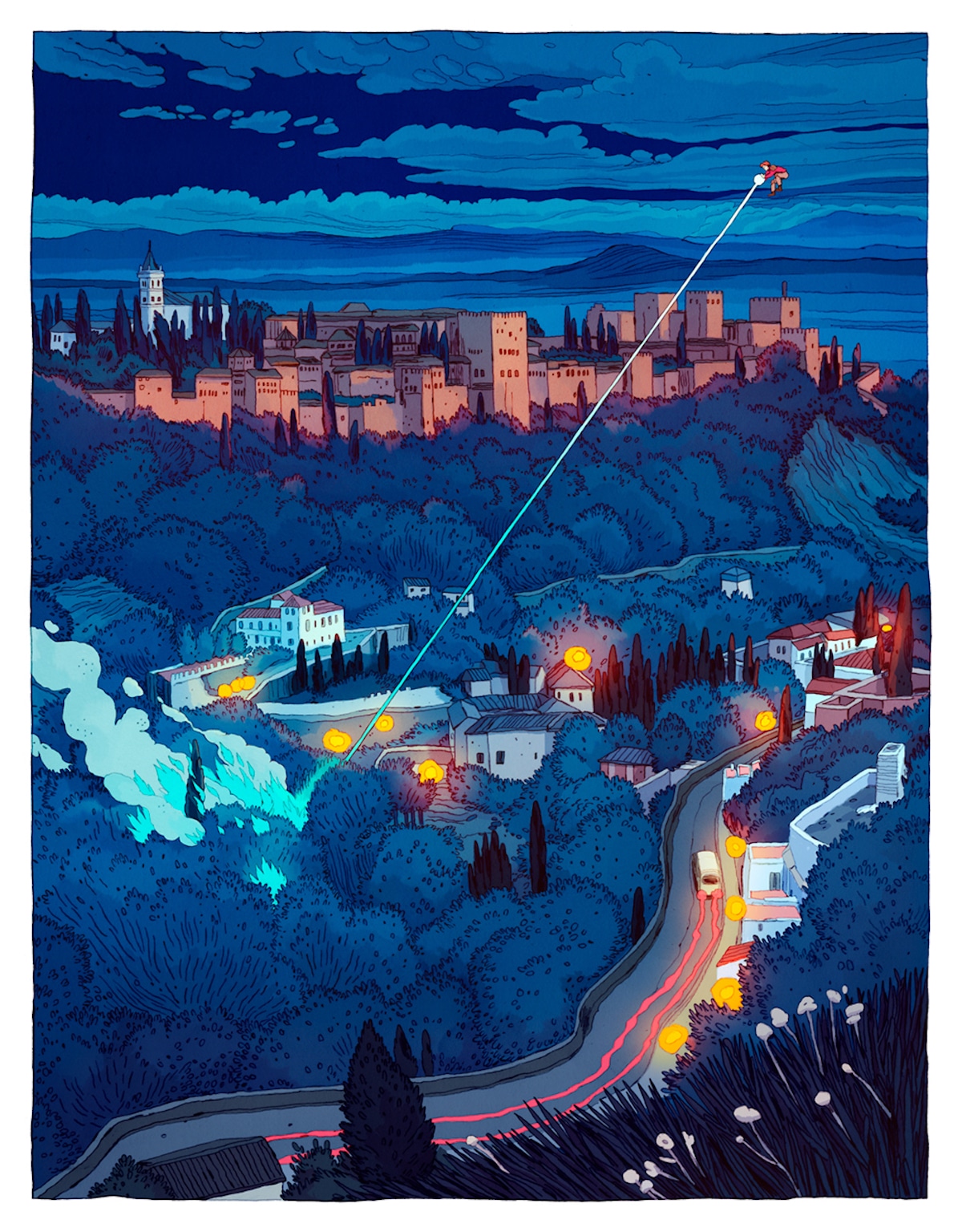 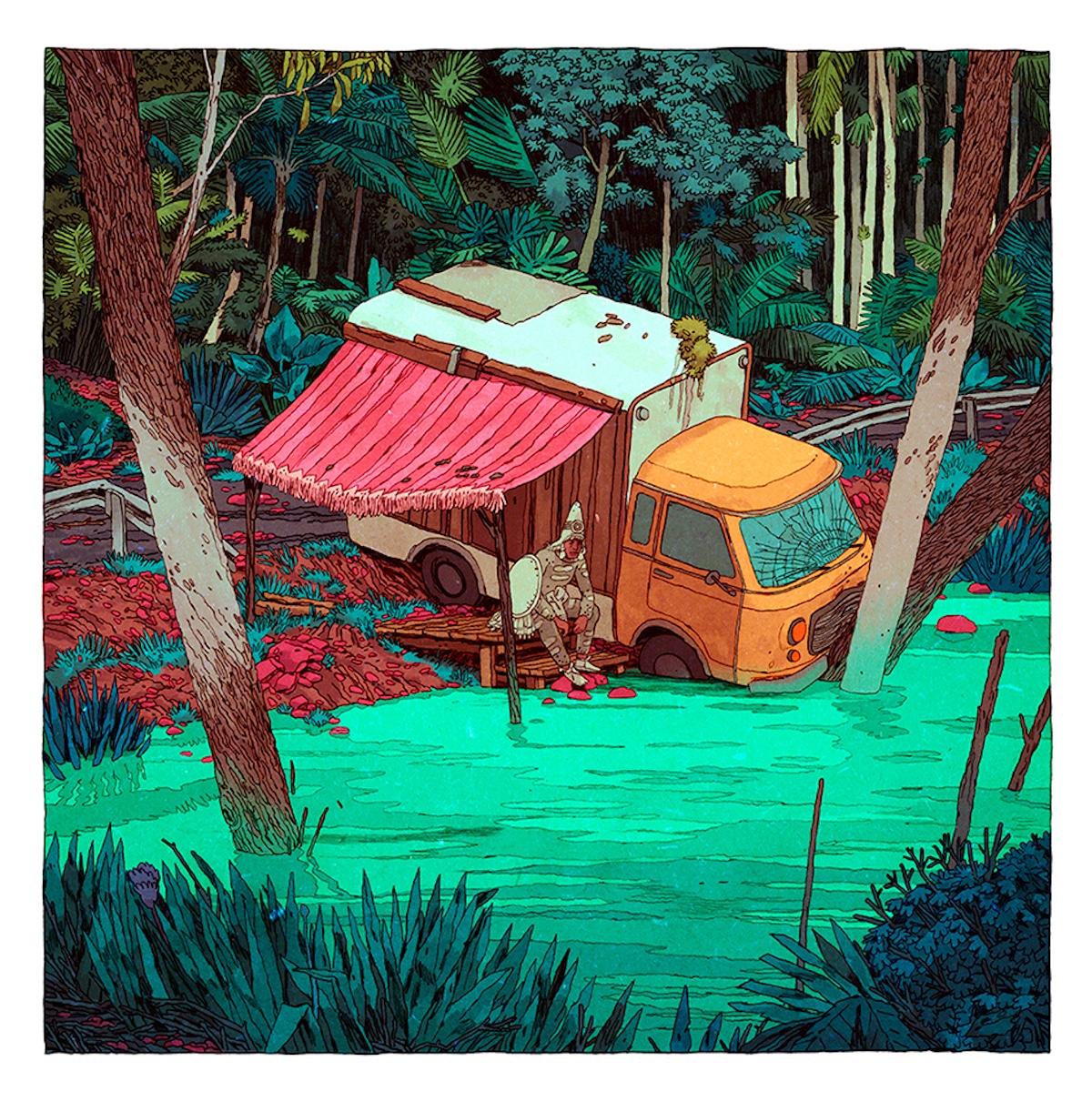 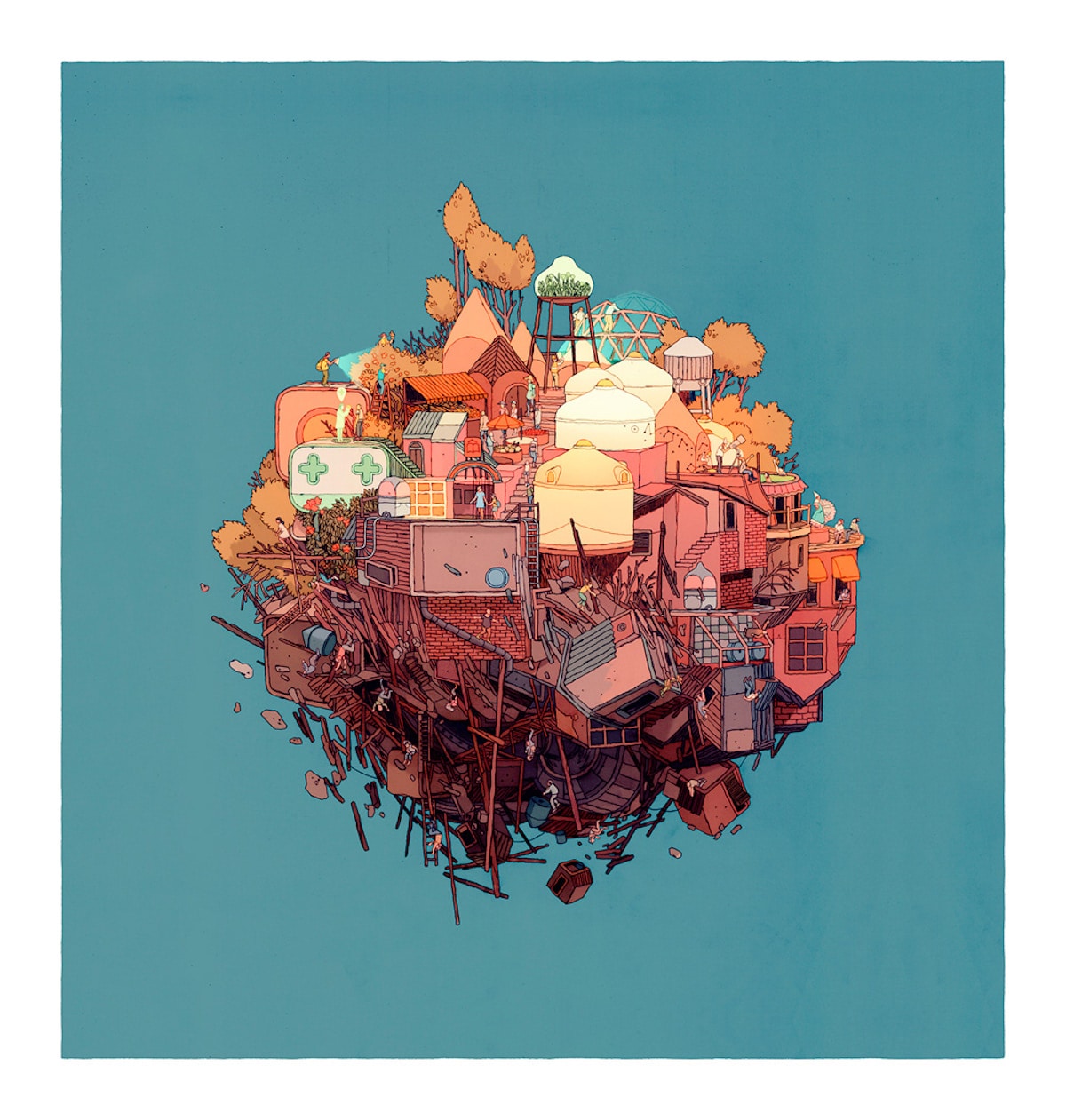 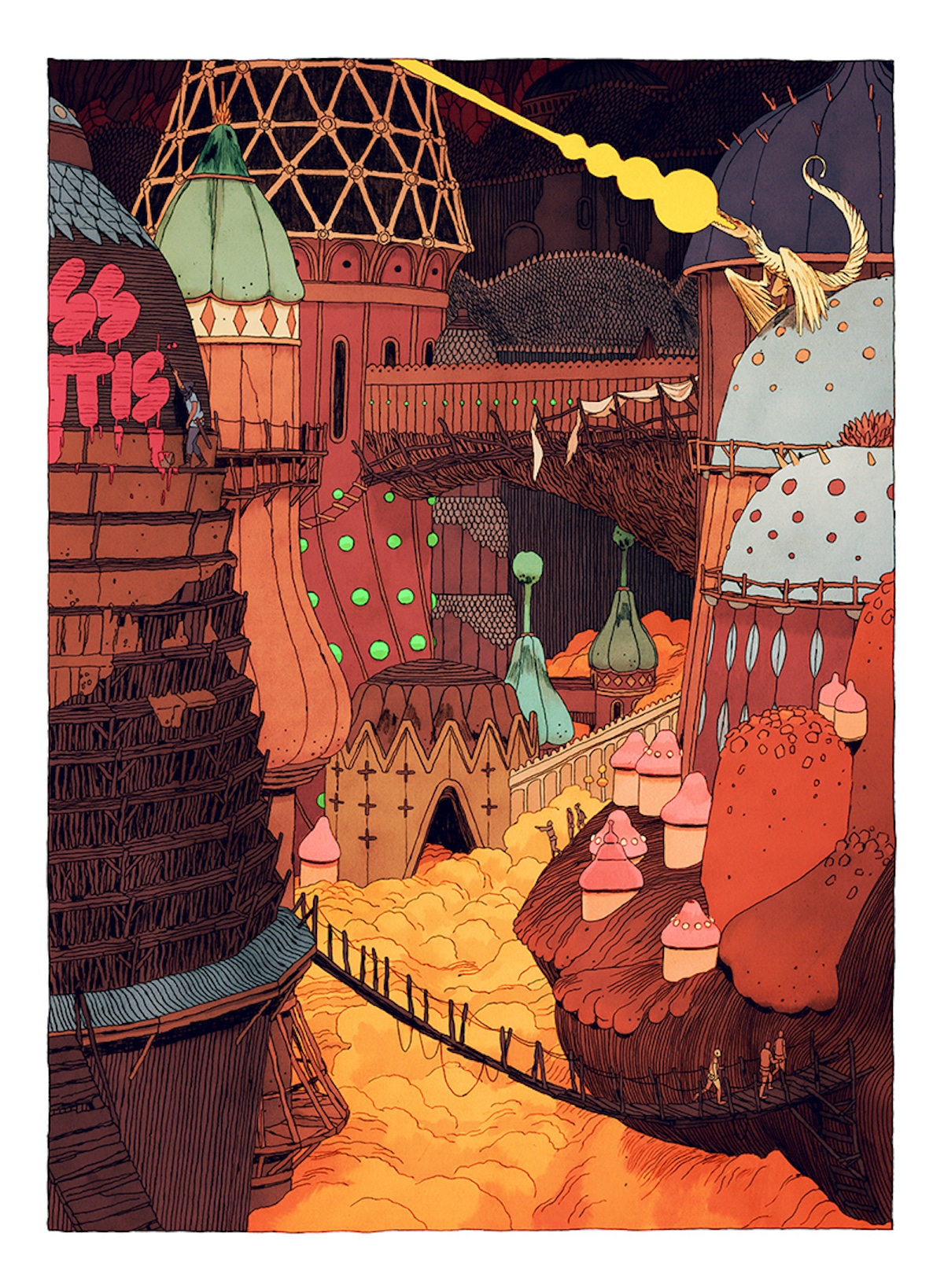 My Modern Met granted permission to use photos by Jon Juarez.

Diverse Character Illustrations Made From Iconic Symbols of Their Beloved Cities

Learn to Draw Anything with These Handy Online Resources and Books

Like these unknown worlds? Share
Like My Modern Met on Facebook
Get Our Weekly Newsletter
Become a
My Modern Met Member
As a member, you'll join us in our effort to support the arts.
Become a Member
Explore member benefits