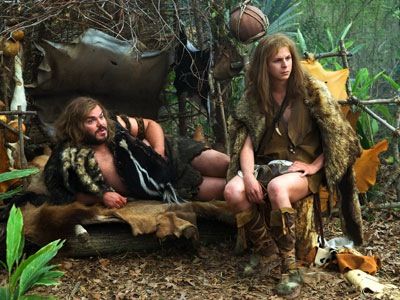 If you were one of the millions of people who caught the Cardinals and Steelers duke it out yesterday during the Super Bowl, you may have caught one of the many movie previews. Two comedies that caught our attention were Land of the Lost starring Will Ferrell and Year One starring Jack Black and Michael Cera. These movies may be way out in the distance (both are coming out in June) but that doesn't mean we can't eagerly anticipate their arrival. Land of the Lost

Will Ferrell stars as has-been scientist Dr. Rick Marshall, sucked into one and spat back through time. Way back. Now, Marshall has no weapons, few skills and questionable smarts to survive in an alternate universe full of marauding dinosaurs and fantastic creatures from beyond our world – a place of spectacular sights and super-scaled comedy known as the Land of the Lost. In theaters June 5, 2009. Year One – Two Minute Preview

When a couple of lazy hunter-gatherers (Jack Black and Michael Cera) are banished from their primitive village, they set off on an epic journey through the ancient world in Columbia Pictures' comedy “Year One.” In theaters June 19, 2009,