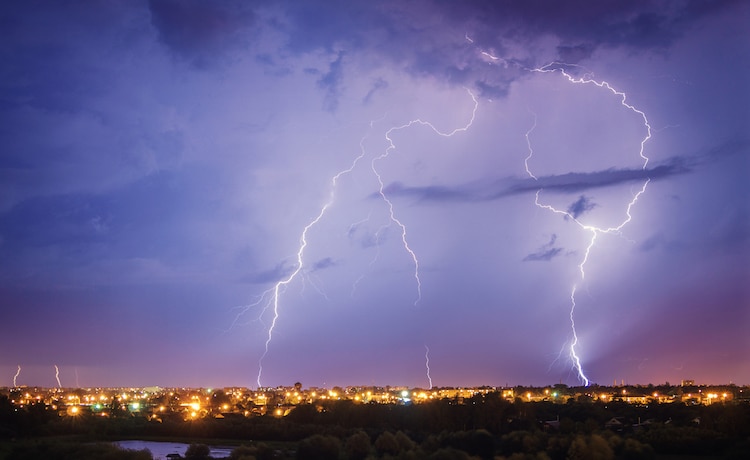 Stretching nearly 770 kilometers (about 478.5 miles), a bolt of lightning that reached across three U.S. states has set a new world record. According to the World Meteorological Organization, this incredible megaflash beat the previous record by nearly 70 kilometers (43.5 miles). This extreme weather event is one of two record-setting incidents announced by the UN organization.

The megaflash occurred on April 29, 2020 in an area of the United States known for powerful storms. According to WMO, the flash covered a horizontal distance of 768 kilometers (477.2 miles). The lightning bolt was so long that it stretched across Mississippi, Louisiana, and Texas. To put things into perspective, the organization stated that its length is the equivalent of the distance between London and the German city of Hamburg or New York City and Columbus, Ohio.

The previous record-holder was a lightning bolt in Brazil that measured 700 kilometers (440 miles). That incident occurred in 2018 and was more than double the previous record holder. The increased length of these megaflashes is a clear signal that weather is shifting toward extremes.

“Environmental extremes are living measurements of the power of nature, as well as scientific progress in being able to make such assessments. It is likely that even greater extremes still exist, and that we will be able to observe them as lightning detection technology improves,” said Professor Randall Cerveny, rapporteur of Weather and Climate Extremes for WMO.

WMO also announced a second world record, this time for the greatest duration of a single flash. The new record is 17.102 seconds from the flash that developed continuously through a thunderstorm over Uruguay and northern Argentina on June 18, 2020. This beat the previous record from 2019, which was also in Argentina, by 0.37 seconds.

As incredible as these events are, they are also a reminder of the power of weather and the importance of safety. “Lightning is a major hazard that claims many lives every year. The findings highlight important public lightning safety concerns for electrified clouds where flashes can travel extremely large distances,” said WMO Secretary-General Prof. Petteri Taalas.

To stay safe, WMO recommends that whenever thunder is heard or lightning is reported within 10 kilometers (6.2 miles), go to a lightning-safe location. This means a building with substantial wiring and plumbing, not a beach or a bus stop. If that isn't available, the second-best option is a fully enclosed metal-topped vehicle.

What a strike! Share
Like My Modern Met on Facebook
Get Our Weekly Newsletter
Become a
My Modern Met Member
As a member, you'll join us in our effort to support the arts.
Become a Member
Explore member benefits
What a strike!