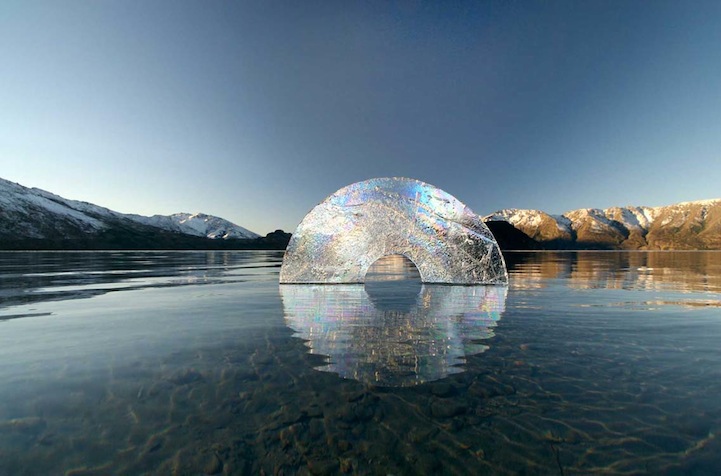 With his project collaborator Philippa Jones, photographer and artist Martin Hill travel to remote locations around the world to create environmental sculptures that represent a visual circle of life. What sets his land art apart from the rest, is that many of his works don't completely form until the water is calm and the sun hits them, creating a startling reflection in the water.

Like all land artists, prior to leaving each location, Martin makes sure that each site is left exactly as it was found. When asked what he hopes others get out of his works, he says, “I hope people reflect on their relationship to natural systems and how they can help to improve it through the way they live their lives.”

“This was part of a year long commissioned project about a sense of place and being connected to nature. Philippa Jones and I extracted a slab of ice from a frozen pond and cut it with a penknife into a semi circle with a base that sat below the water level on the lake bed where we stood it. The reflection completes the circle. This was only achievable in calm weather and it lasted about two minutes before it broke at the surface where the temperature is warmest.” 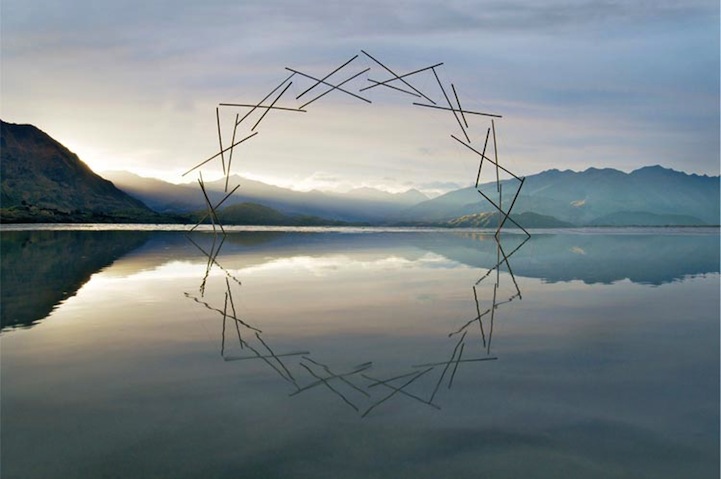 Synergy
“Made from raupo stems interconnected by a network of flax threads, using nature's universal construction system known as tensegrity. None of the stems touch, they are held under compression by tension from the threads. This means the system is in total dynamic balance and stress is distributed equally throughout the system making the sculpture flexible. Photographed in the shallows of Lake Wanaka in the calm at sunset to create a reflection.” 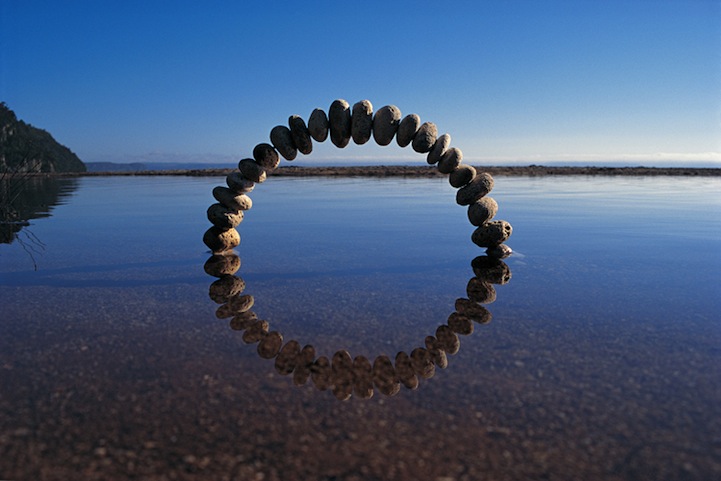 Stone Circle
“This idea could only work because of the lightness of pumice stones. A hole was made in them to thread them onto a green stick which was bent into a half circle in the shallow water. The photograph was taken in calm early morning conditions with the camera near water level. The location was Whanganui Bay at Lake Taupo, New Zealand.” 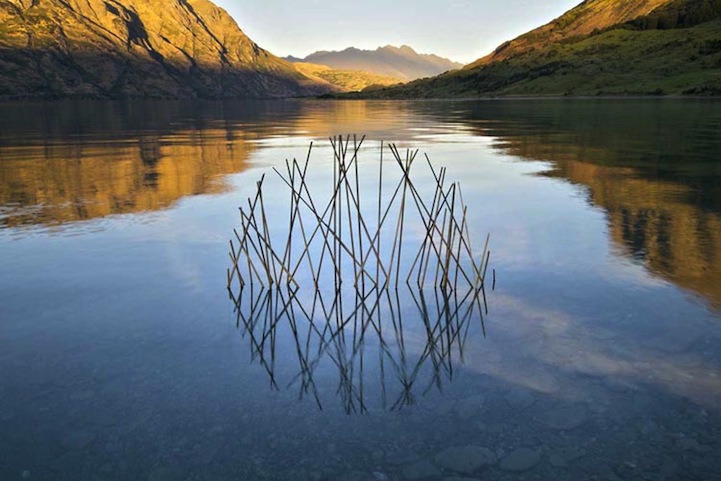 Sunrise Circle
“Raupo stems pushed into the lakebed and photographed at sunrise to catch the light and calm water for the reflection. Kidds Bush, Lake Hawea, Central Otago, New Zealand.” 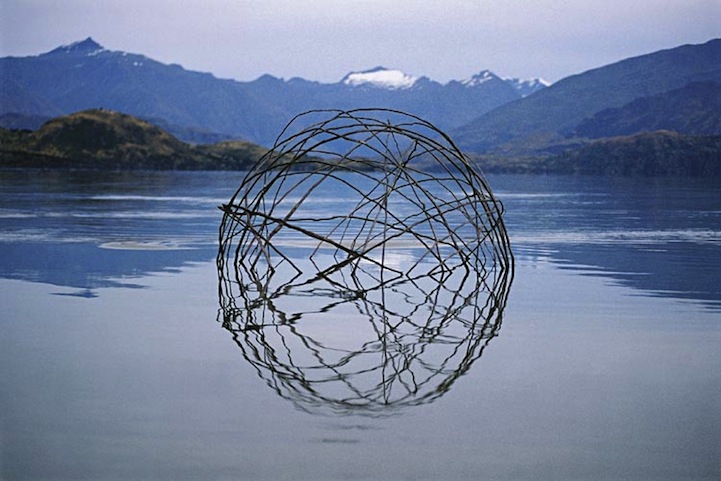 Kanuka Sphere
“This was made in the same location as Kanuka Circle, using the same pliable sticks from some kanuka trees that had been flooded by the high lake level. Here they are pushed into the soft lake bed, criss-crossing to form a half sphere that is reflected on the surface of the lake. Fog Peak dominates the mountainscape across Lake Wanaka in Mt. Aspiring National Park in Central Otago, New Zealand.” 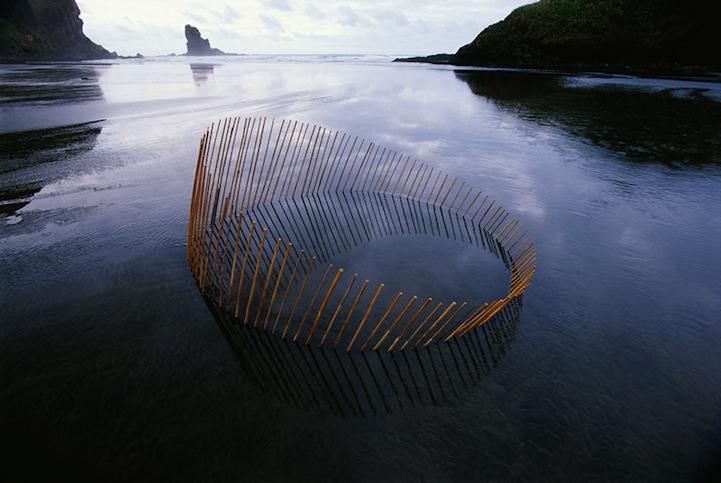 Rising Circle
“This sculpture is based on the rising use of cyclical processes in human industrial systems that mirror nature. Pushing the stems of Toetoe into the wet sand below the tide line achieved a reflection that created the mirror effect.” 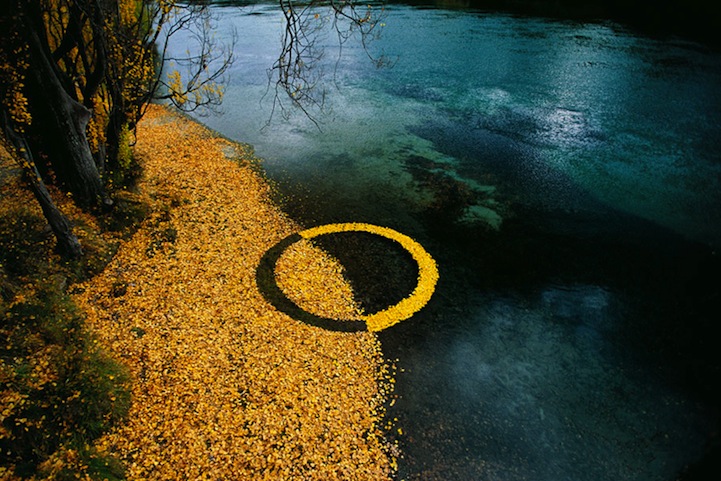 Autumn Leaf Cycle
“Controlling the poplar leaves in an eddy of the mighty Clutha River in Otago was challenging. Ultimately they were made to stay where we put them by corralling them using little sticks pushed into the riverbed and trimming them to just below the surface of the water. Many leaves were waterlogged and sank to the bottom before we were finished but we persevered because it expressed the idea of cycles. The best angle for taking the photograph was from a tree nearby.”

From February 16 to April 27, 2014, Martin will be exhibiting new work in a show called Watershed. It will be held at the McClelland Sculpture Park and Gallery in Melbourne. According to Martin, “It is an entirely new body of work made over two years about the water cycle including 25 photographs of environmental sculptures, two sculptures and two videos.” You can buy his book, called Earth to Earth: Art Inspired by Nature's Design, right now on Amazon.

“My photographs are made with the same sunlight that powers all the earth's living systems.” – Martin Hill