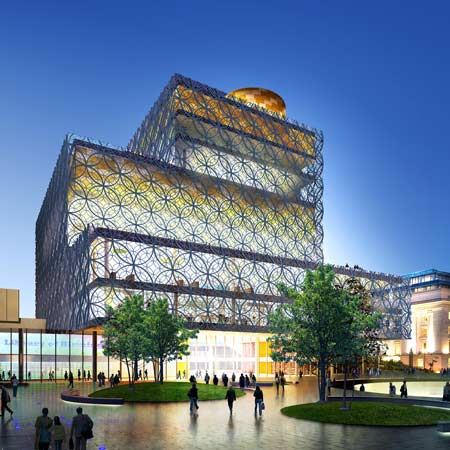 Dutch architects Mecanoo Architecten have unveiled their design for the new library in Birmingham, England, due to open in 2013. The new $284 million (193 million) structure will occupy a prime site on Centenary Square, the city's largest public square, acting as the flagship for the regeneration of Birmingham, and celebrating the “Global City with a Local Heart”. The 333,600 sq ft (31,000 sq m) building will provide 20% more space than the existing Birmingham Central Library and will be capable of taking up to 10,000 visitors a day. The highly transparent glass building wrapped in a delicate metal filigree, is inspired by the rich history of Birmingham, with its tradition of craftsmanship and industry. The generous shared entrance to the Library will be sheltered below a public balcony, creating a magnificent space to watch events in the square. Above the balcony, the building volume steps away, creating a second open-air space, an elevated garden with panoramic views. At the summit, the rooftop rotunda will offer spectacular views over the entire city. Mike Whitby, Leader of Birmingham City Council, said: “Despite the global economic slowdown, demand for and confidence in Birmingham has never been higher. The new Library of Birmingham will be an iconic landmark, and a testament to the role Birmingham will play in the 21st century as a truly global city. The new designs are further evidence of our intention to attract world-class architects to work with the City, and these designs support our ambition to create a building which will bring people together, nurture creativity, allow far greater access to our cultural heritage, and act as a focal hub within the city and the region.” 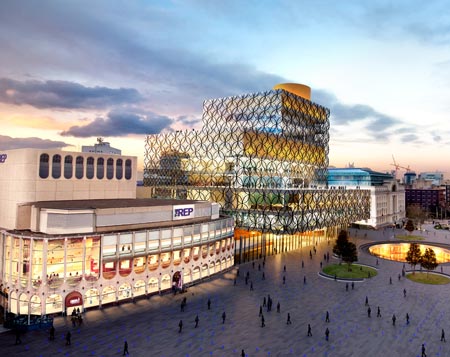 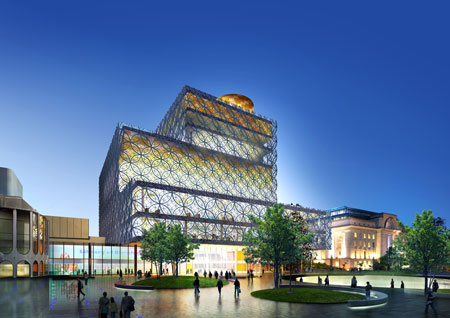