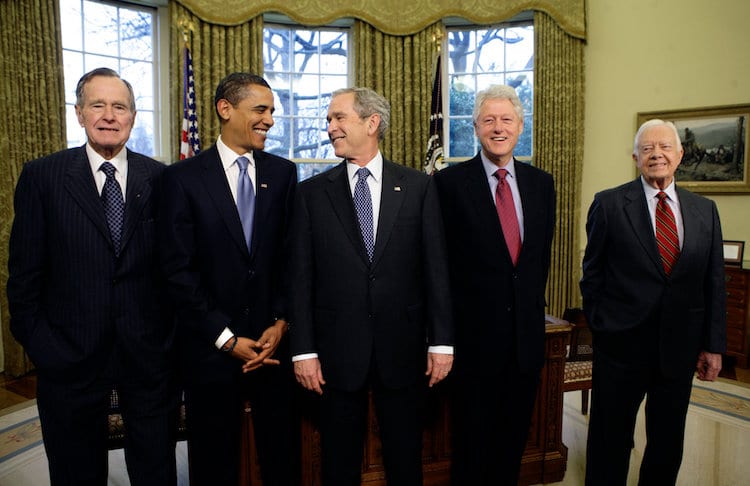 “The critics will rage.” That’s what former President George W. Bush wrote to his successor (then-President-elect) Barack Obama shortly before he took the Oval Office in 2009. Included as a line in a longer note, Bush’s presidential letter is part of a long tradition of presidents writing to those who are replacing them. The parting words transcend party lines and offer advice, camaraderie, and comfort to what will be an inexplicably challenging four (or eight) years.

The public is rarely privy to what’s written on White House stationary, but the National Archives have revealed the notes from Bill Clinton to George W. Bush and from Bush to Obama. Another note, from George H.W. Bush to Clinton, was also shared on Instagram by Hillary Clinton.

Read the full text of the letters, below. What’s clear from them is that despite political and ideological differences, the men concluded a peaceful transition of power by ultimately wishing each other well. 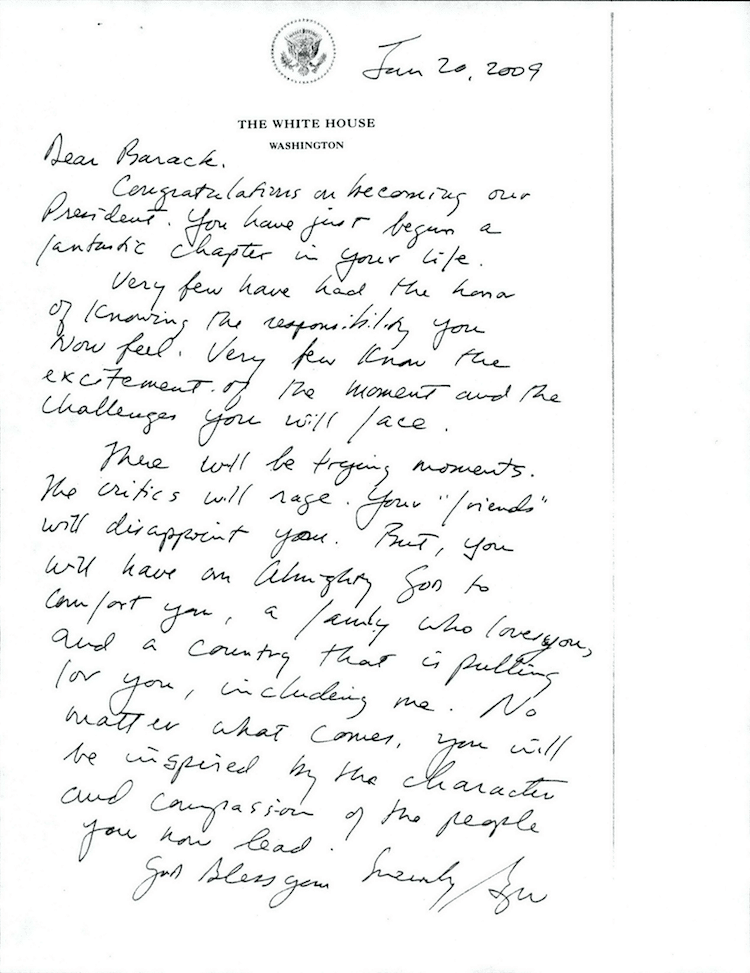 Congratulations on becoming our President. You have just begun a fantastic chapter in your life.

Very few have had the honor of knowing the responsibility you now feel. Very few know the excitement of the moment and the challenges you will face.

There will be trying moments. The critics will rage. Your “friends” will disappoint you. But, you will have an Almighty God to comfort you, a family who loves you, and a country that is pulling for you, including me. No matter what comes, you will be inspired by the character and compassion of the people you now lead. 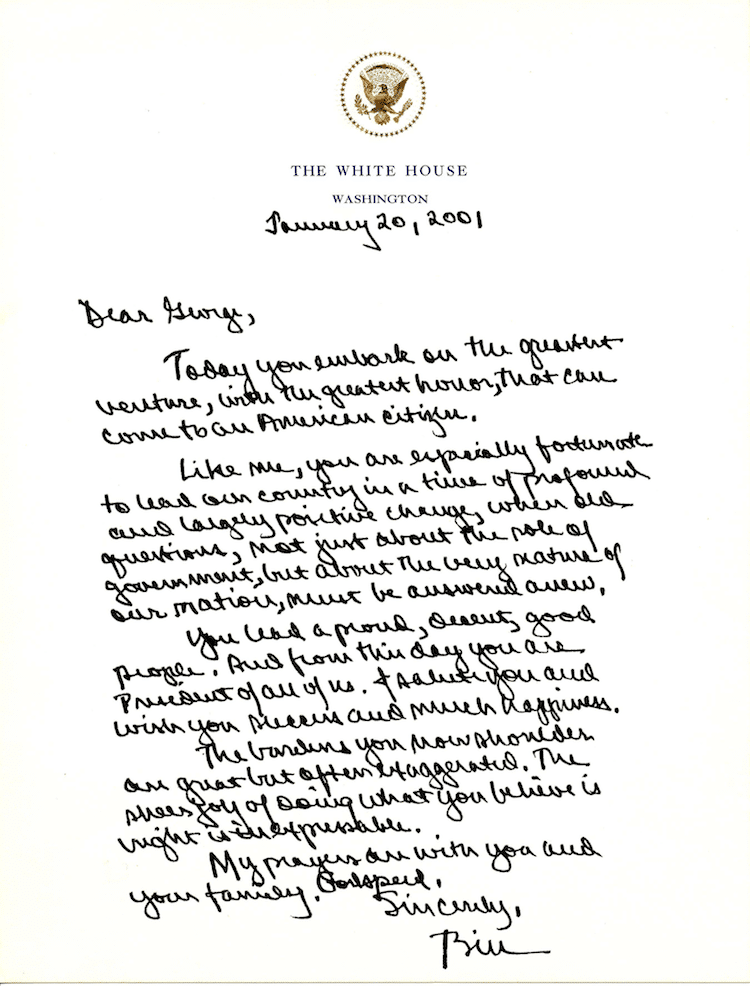 Like me, you are especially fortunate to lead our country in a time of profound and largely positive change, when old questions, not just about the role of government, but about the very nature of our nation, must be answered anew.

You lead a proud, decent, good people. And from this day you are President of all of us. I salute you and wish you success and much happiness.

The burdens you now shoulder are great but often exaggerated. The sheer joy of doing what you believe is right is inexpressible.

My prayers are with you and your family. Godspeed. 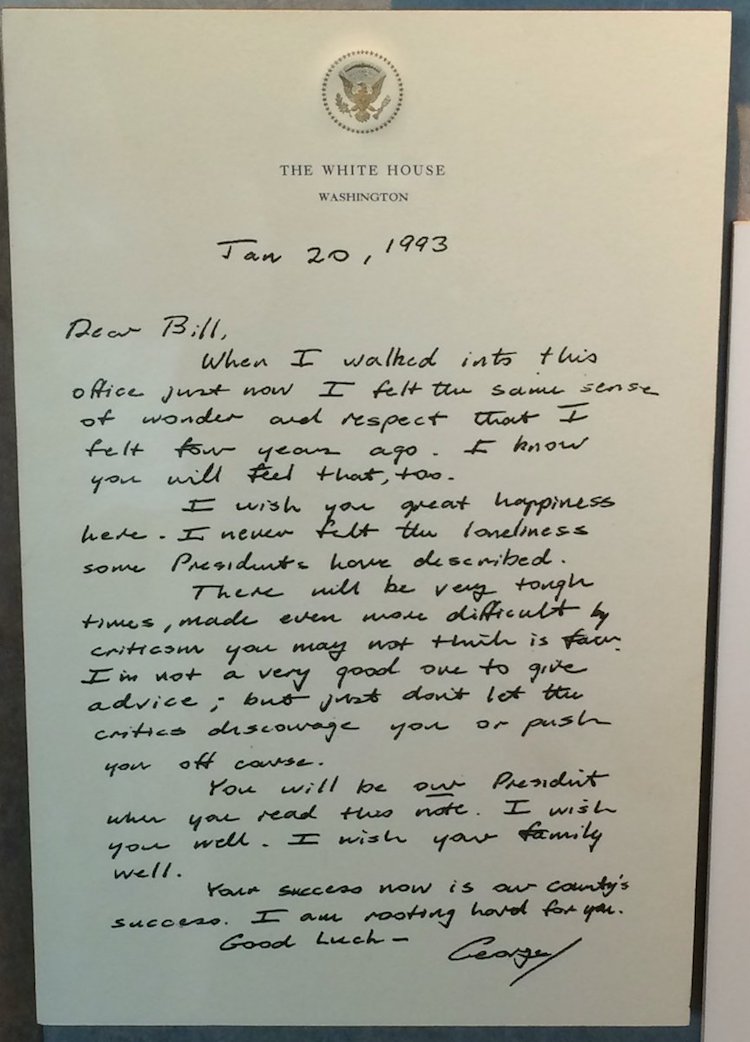 When I walked into this office just now I felt the same sense of wonder and respect that I felt four years ago. I know you will feel that, too.

I wish you great happiness here. I never felt the loneliness some Presidents have described.

There will be very tough times, made even more difficult by criticism you may not think is fair. I’m not a very good one to give advice; but just don’t let the critics discourage you or push you off course.

You will be our President when you read this note. I wish you well. I wish your family well.

Your success now is our country’s success. I am rooting hard for you.

We’re curious to know what Obama wrote in his presidential letter to Donald Trump.