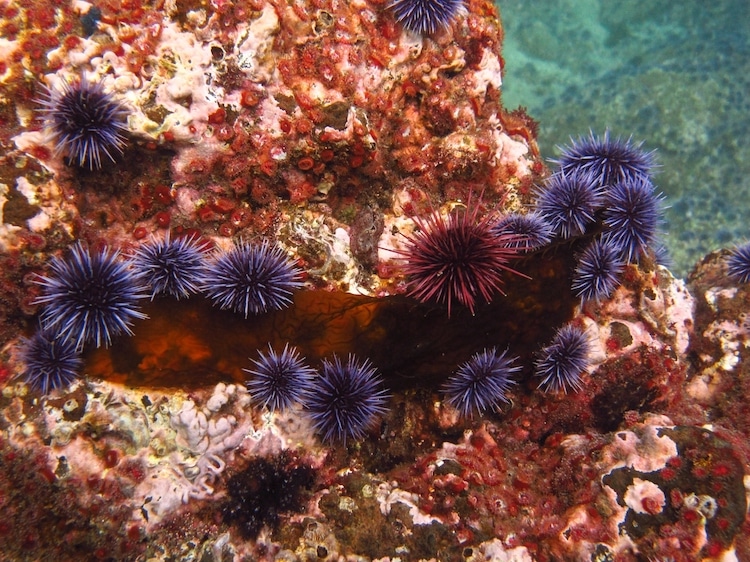 There are 950 species of sea urchins living on seabeds, making them one of the most widespread and common echinoderms in our oceans. They’re often called the “porcupines of the sea” because of their long spines that deter hungry predators. However, the marine animals are also prone to covering themselves with stones, shells, rocks—and even tiny hats.

Biologist Morgan Kester recently shared this discovery on social media. She writes, “I was today years old when I learned that sea urchins naturally use shells as hats for camouflage, so some aquarists had the genius idea to make them tiny hats.” She posted photos of the dapper-looking sea urchins “wearing” 3D-printed cowboy hats, top hats, and fedoras. The sea urchins not only look stylish, but the hats also help to keep them safe. Although the exact reason for covering their “heads” is unknown, it’s been theorized that the extra weight helps prevent the sea creatures from being washed away during storms. The extra coverage is also thought to protect sea urchins from predators and UV rays.

One person that created hats for sea urchins is Redditor VanillaBean5813. They explain, “My dad is the real aquarist (and also a Redditor), I modify 3D models from the internet, and my mom runs the 3D printer.” After testing several hat styles, they settled on a wide-brimmed design. “We went through a few iterations of hats,” they recall. “We learned that hollow structures were too floaty and that caused them to lose the witches hat we made.”

Another person known as Riosouza on the Reed2Reef forum has also been making hats specially for sea urchins. “I decided to do a quick design for a 3D-printed hat, and for my surprise they absolutely love it,” they say. “Since I replaced the rocks and shells from their back with the hats, they never let it go, and I was astonished to see them moving the hats towards the light source. Which leads me to the conclusion they certainly use it against excessive UV rays.”

If you’re wondering if making hats for sea urchins is safe, Emma Verling, a senior post-doctoral researcher at MaREI Centre for Marine and Renewable Energy sheds some light: “I think the 3D hats are a fun idea, a great talking point, and a way to educate people as to the complex ecology of sea urchins…I honestly don’t see that they could do any harm in an aquarium setting.”

Check out photos of the hat-wearing sea urchins below.

Sea urchins like to wear shells as protection, so people have been making them stylish, 3D-printed hats.

I was today years old when I learned that sea urchins naturally use shells as hats for camouflage, so some aquarists had the genius idea to make them tiny hats from r/interestingasfuck

I was today years old when I learned that sea urchins naturally use shells as hats to make them feel safer and camouflaged so some aquarists had the genius idea to make them tiny hats pic.twitter.com/z8IcJx7fBI

they look more stylish than their wild bros pic.twitter.com/b9NOInYtyP