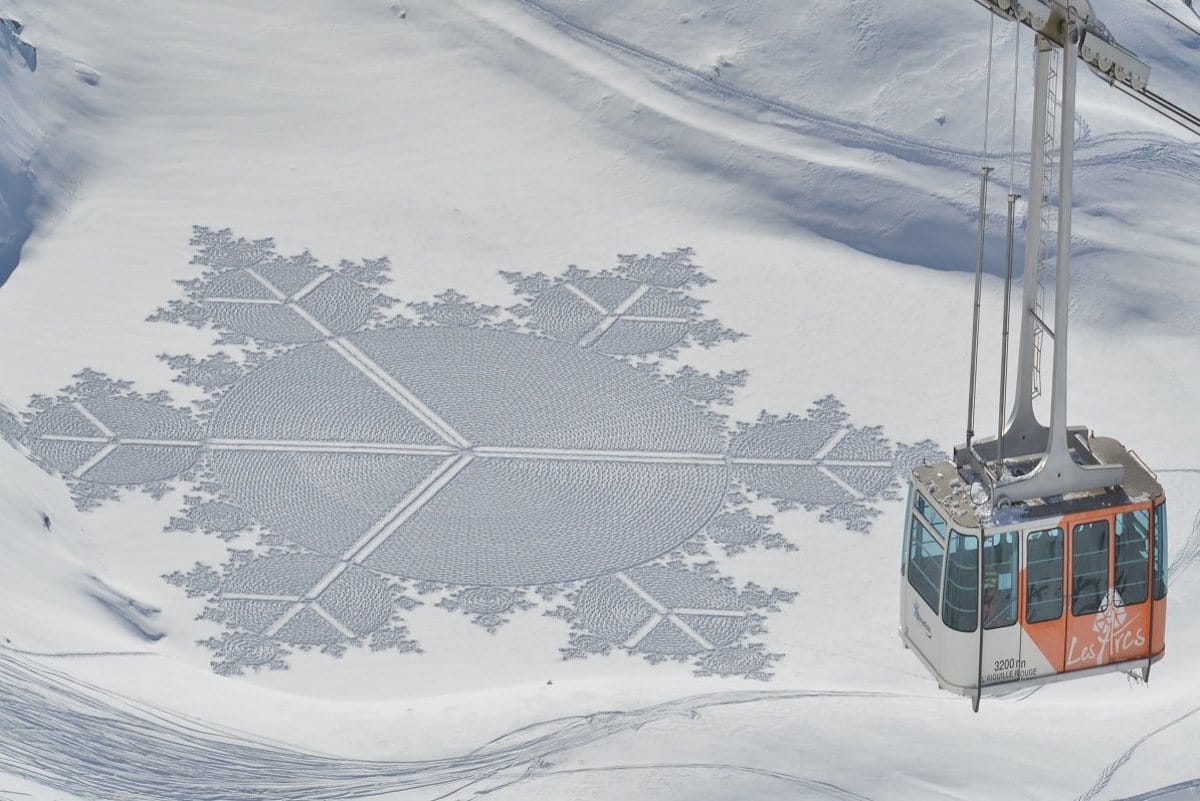 Outdoor enthusiast and cartographer Simon Beck has carved his own path in the art world—literally. For over a decade, he has been a snow artist who walks soccer ball-sized fields and creates striking geometric designs in the untouched powder. The mandala-esque circles and tumbling triangles unfold slowly with each step—his version of a brushstroke on a white canvas. The entire design is only revealed when viewed from far above with the sun casting a shadow on all of the meticulous moves he's just made.

Beck’s ephemeral snow art is an exercise of the body and mind. It begins with careful planning; he will map out a design on paper using one millimeter as the scale for one step on the ground. Once the design is finalized, Beck grabs his snowshoes, a ski pole, and other tools to get to the long task of walking his sketch. A day’s work can be 12 hours of trudging through the snow, but the results of his efforts are awe-inspiring. It’s no wonder that Beck travels around the world creating his land art on locales ranging from desolate mountainscapes to sports stadiums in snowy cities like Minneapolis.

We spoke to Beck about his artistic practice, including the logistics of his work and what happens if he makes a mistake while in the field. Scroll down for My Modern Met's exclusive interview. 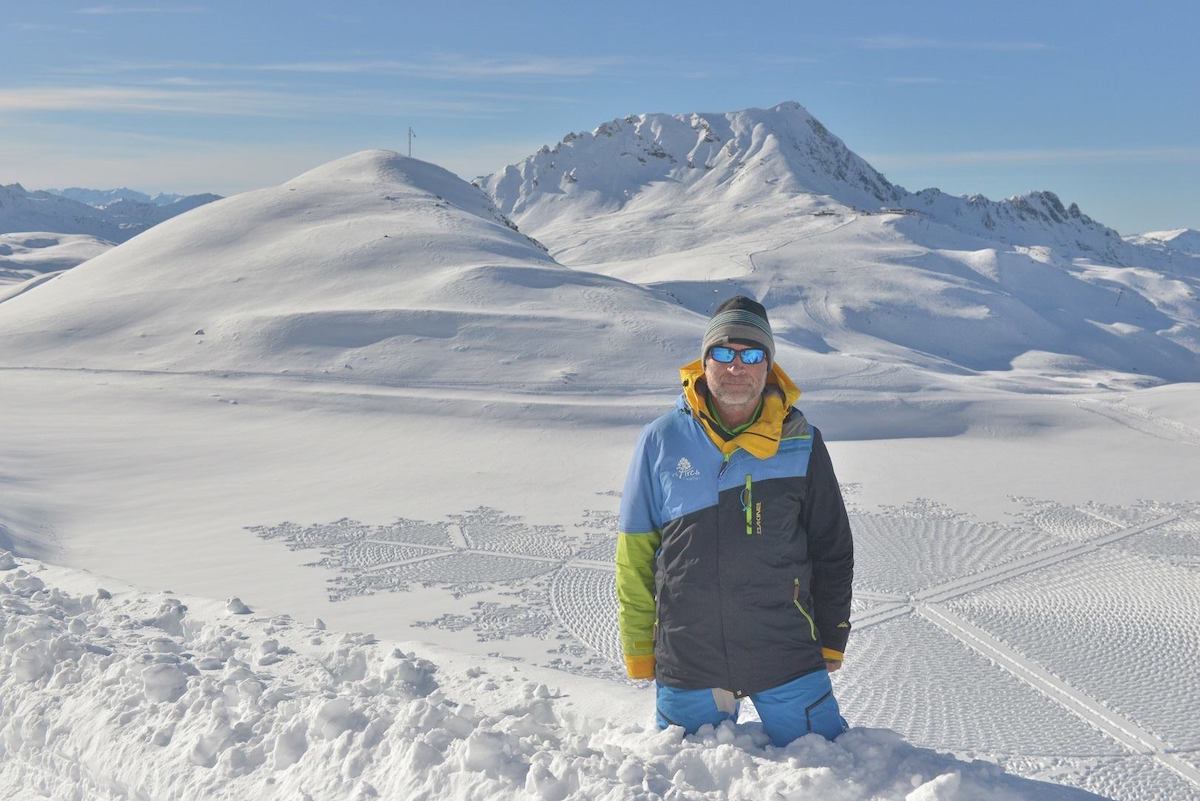 What inspired you to become a snow artist?

It happened more or less by chance. I made a few drawings for fun, but with no digital camera and no access to the internet, it was not for a while until I realized there was nobody else doing anything similar, and it had apparently not been done before. In 2009, I made the decision to take it seriously and make it my primary form of winter exercise (replacing training for competitive orienteering), and give the snow drawing priority over skiing when conditions were good. 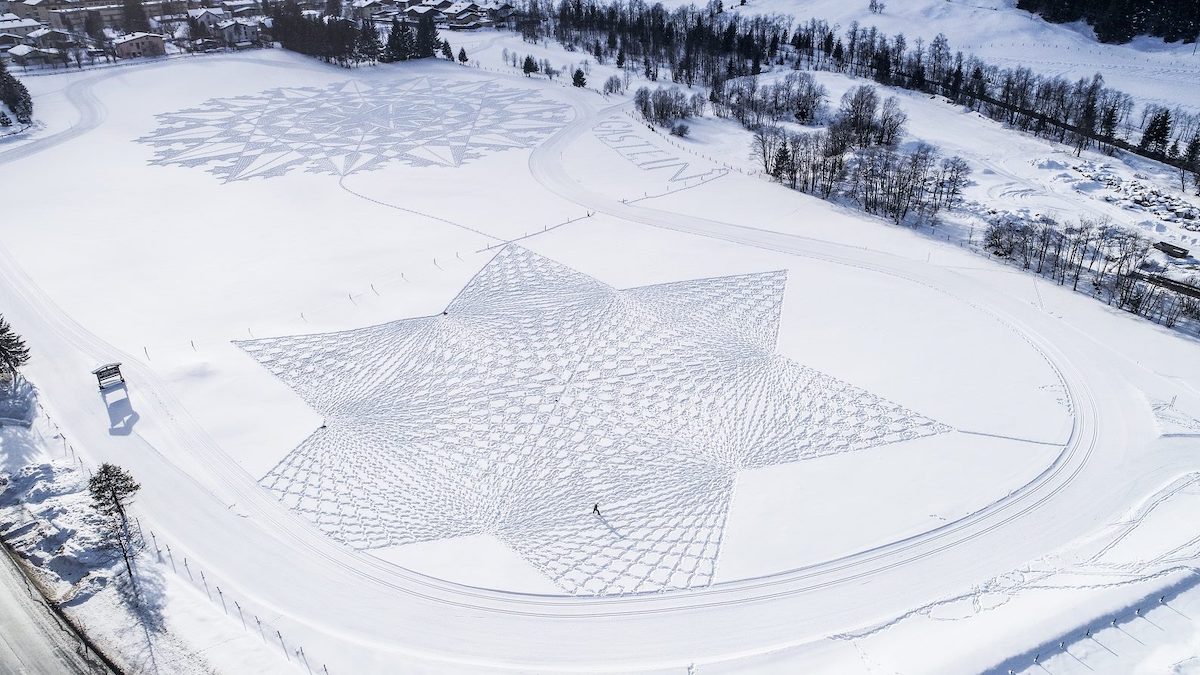 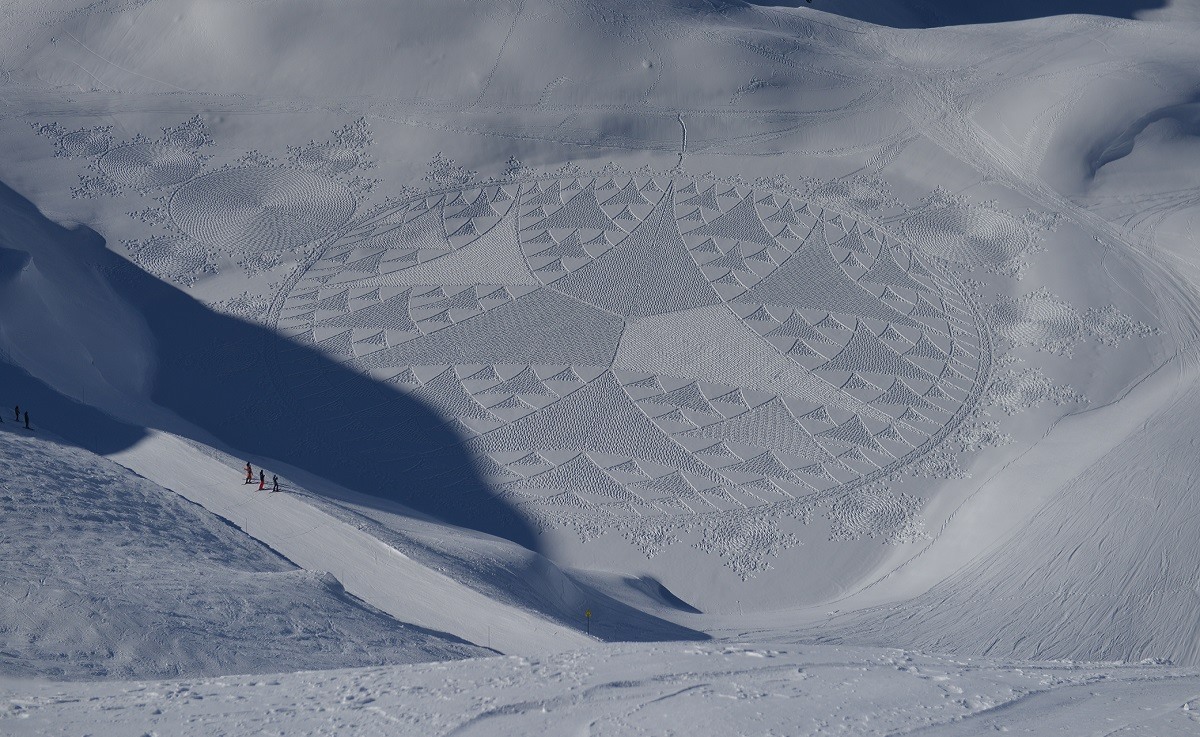 How long does it take you to plan the designs?

Most designs are variations on designs that have been made before, but when necessary I print it on a sheet of A4. If one millimeter equals one pace, a circular drawing that fits sensible onto a sheet of A4 is about a day's work.

What tools do you use in their creation?

Tools are rope and anchor (for making accurate circles), snowshoes, and a ski stick to reach across a gap, and measure a uniform gap between stripes when doing striped shading. Other tools are markers for the key points in the design.

How does the ski pole aid you in your work?

Keeping a consistent gap between stripes when doing stripy shading and to make it easier to walk when the snow is deep.

How has your career as a cartographer helped you in being a snow artist?

Accuracy in the use of a magnetic compass and distance determination by pace counting. And being accustomed to spending many hours walking. 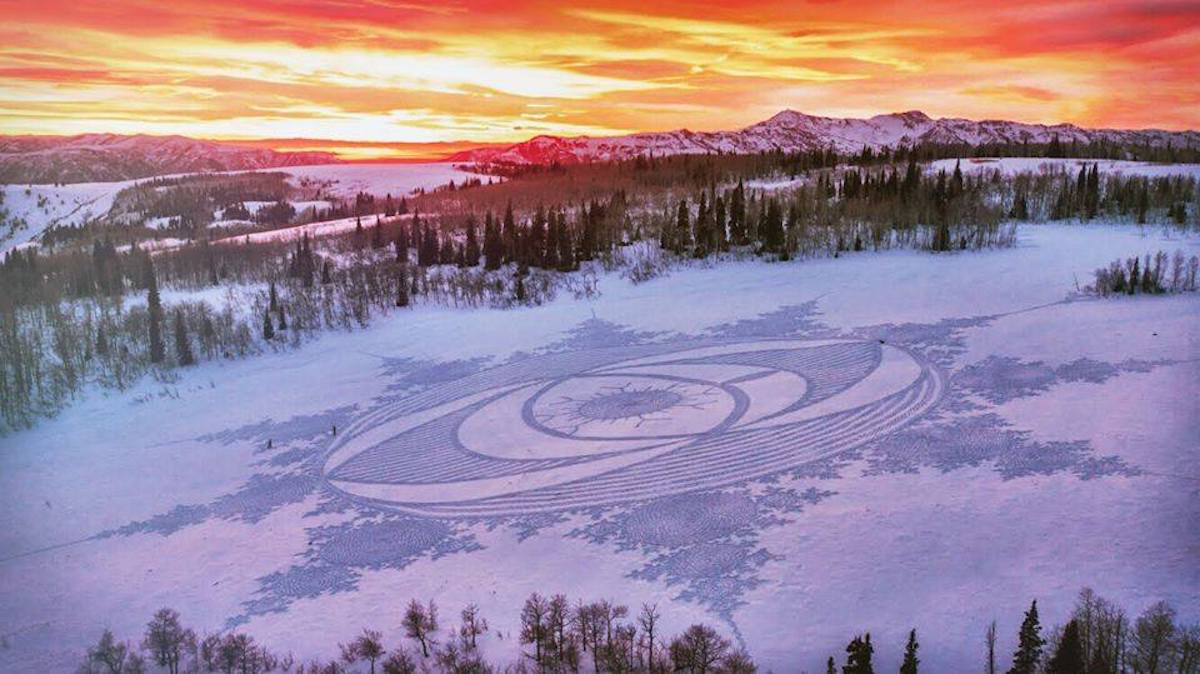 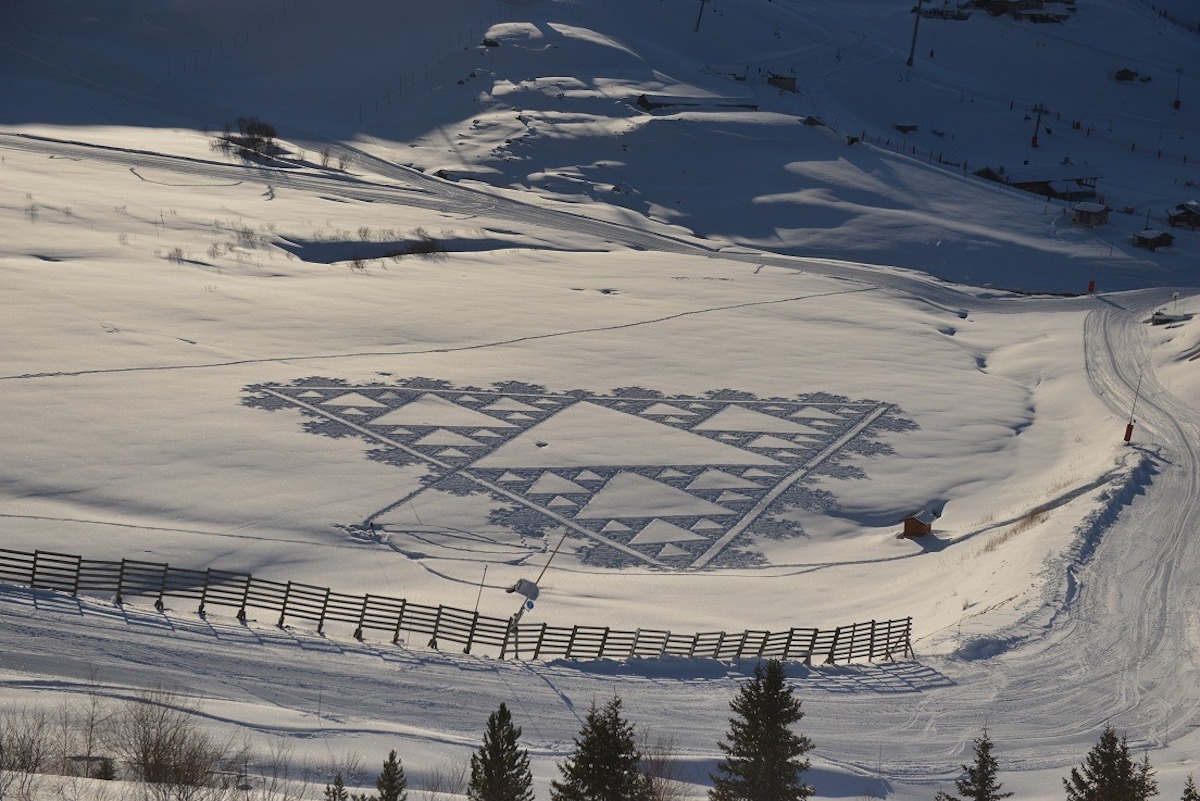 Once you are set on a design, how long does it take to recreate it outside?

As a guideline figure, an area of a soccer field takes four hours. I try to make a design in one day or leave the incomplete design in a symmetrical state, so the photos of the unfinished design look good. In easy conditions, I can work for about 12 hours before I become too tired.

Do you create your snow art all at once, or do you take breaks?

I try to work non-stop, eating a little at a time, as one gets cold when not moving and then it becomes necessary to put on clothes and remove them when one heats up again, and it seems harder to start again after a rest, so I keep detailed parts of the drawing that are made more slowly for when I eat, the fractal edge of the drawing is a good part to create when eating. 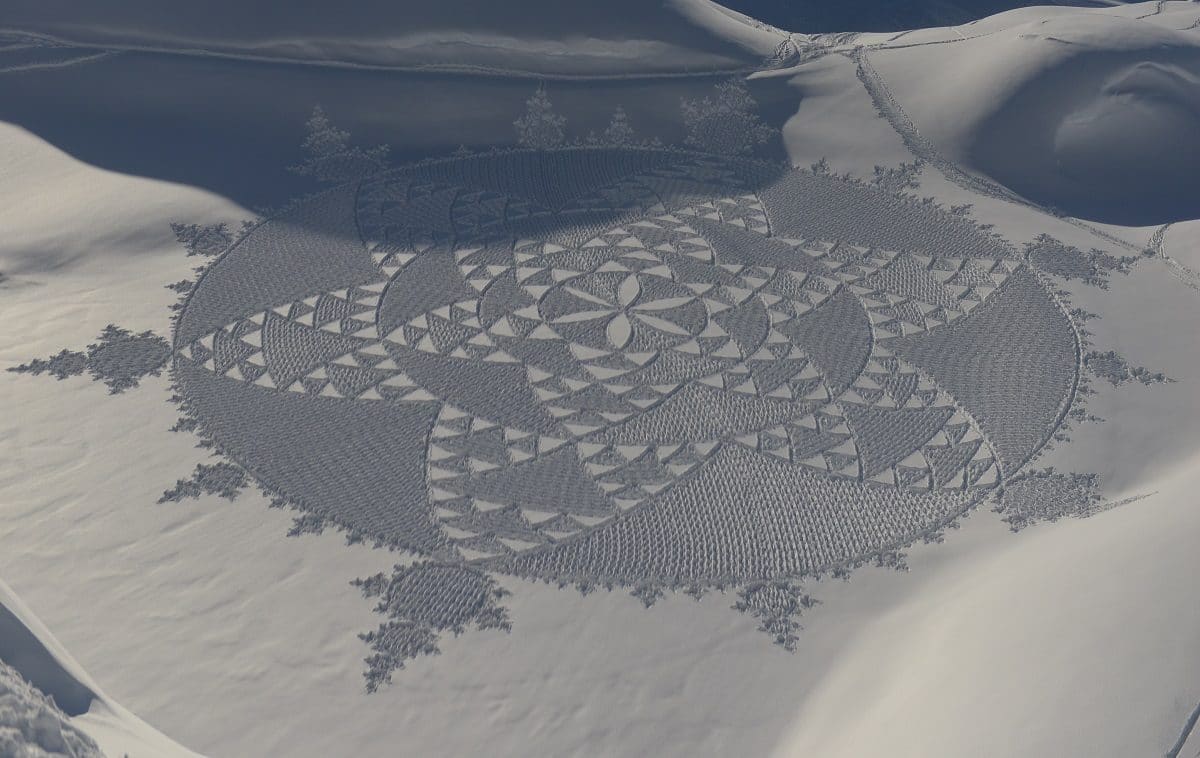 What happens if you make a mistake in your design?

When a mistake is made the usual remedy is to alter the design. Sometimes one just accepts there is a wrong line. Theoretically, it would be easy to cheat and alter the photos (paste something over the line that is wrong). It is important to proceed in a manner that prevents small errors adding together into a major noticeable quantity.

Falling over is unusual. If it happens, then it would be because of the difficult ground and there are likely to be other irregularities that will show through in the result, so the splodge in the snow where one fell would not be so obvious. 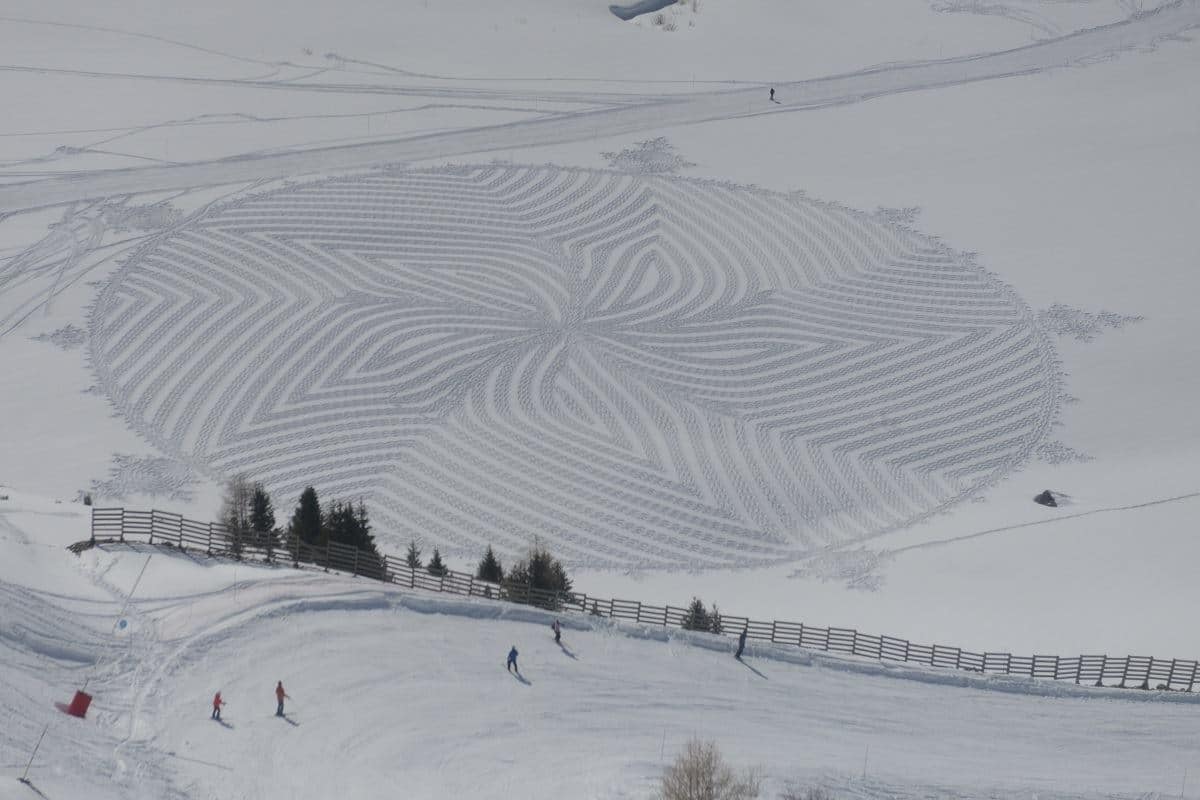 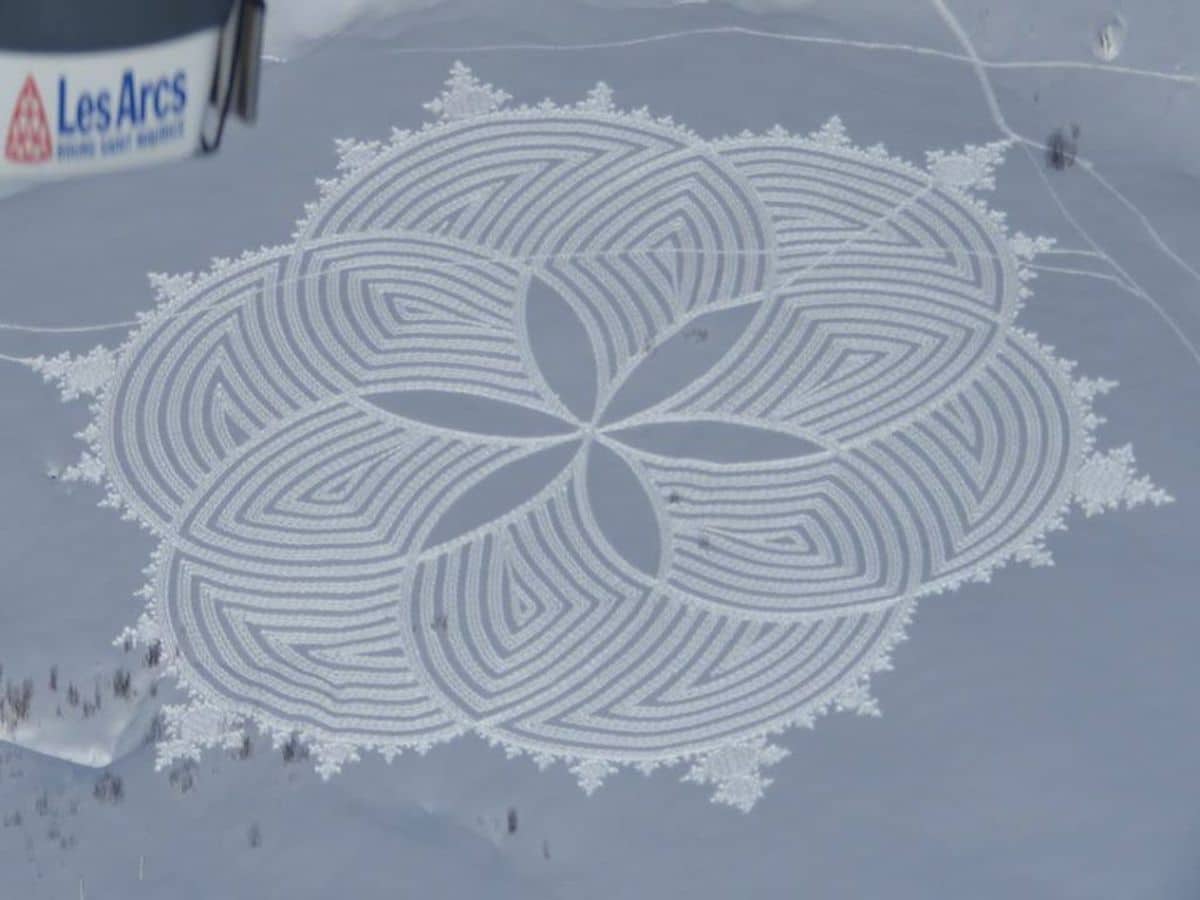 Ultimately, your artwork is impermanent. How do you feel about the fact that it will be washed or blown away?

The key is to get the photos, and the usual reason for failure to get the photos is clouds. The drawings work because of the shadow in the footprints. So no sun equals no result, or a poor one, and the drawing would most likely have to be made again some time.

Of course, the impermanence means it is impossible for a professional to come over and take photos and then sell them, so people have to go to me to get their photos from me. (If one took it really seriously one would destroy the drawing after one has one's own photos. I wouldn't do that, but maybe if someone did try to steal my work by taking his own photos and making money out of my efforts then I would consider doing it.) 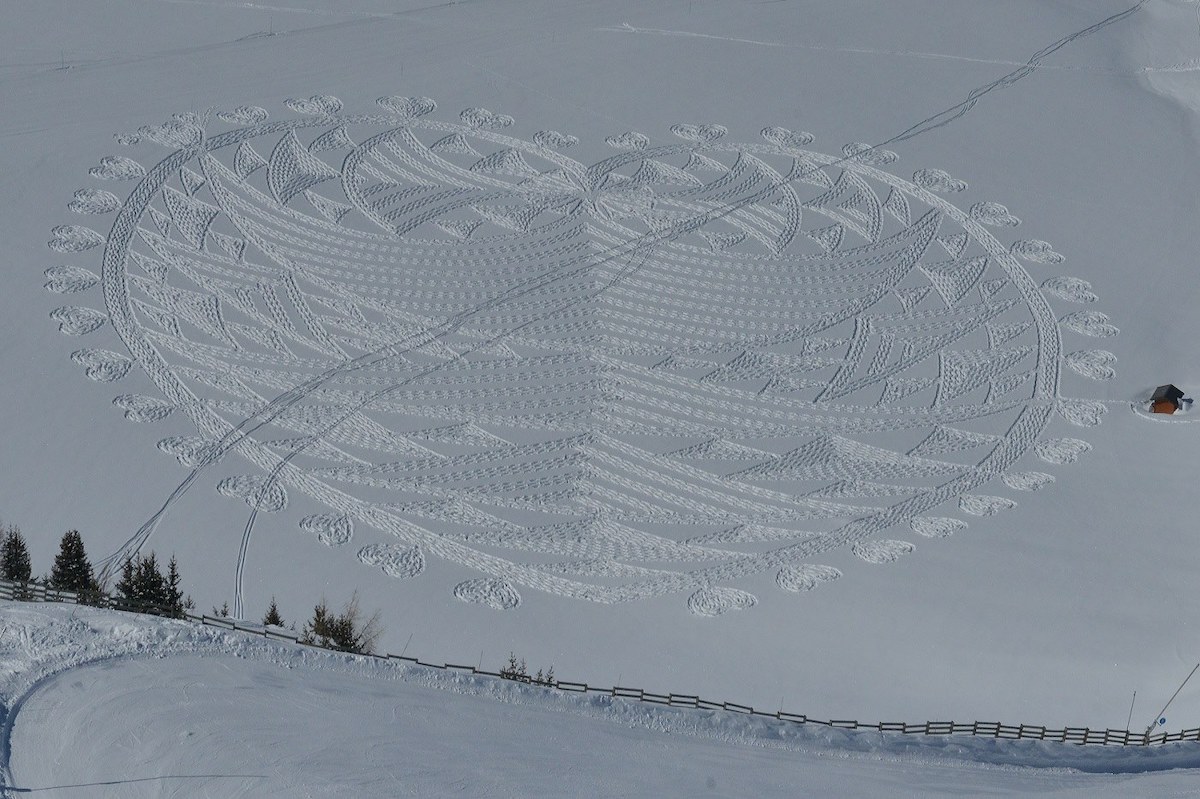 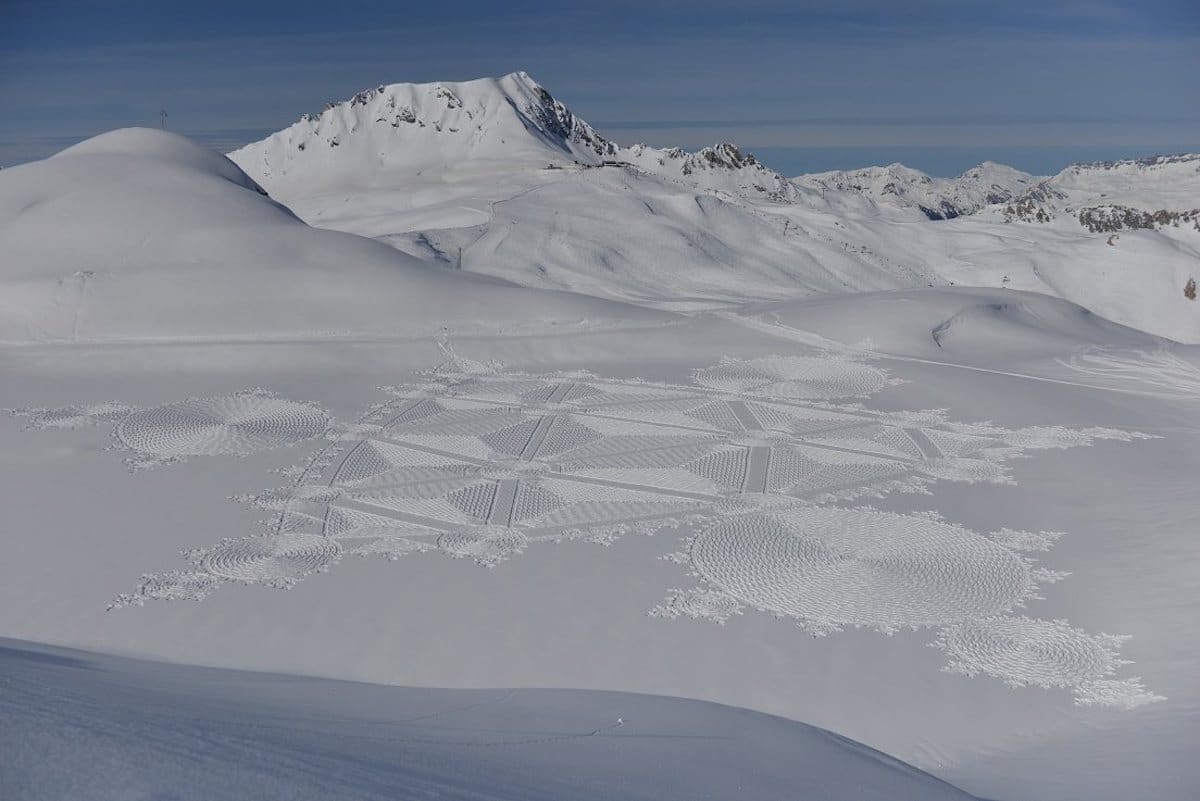 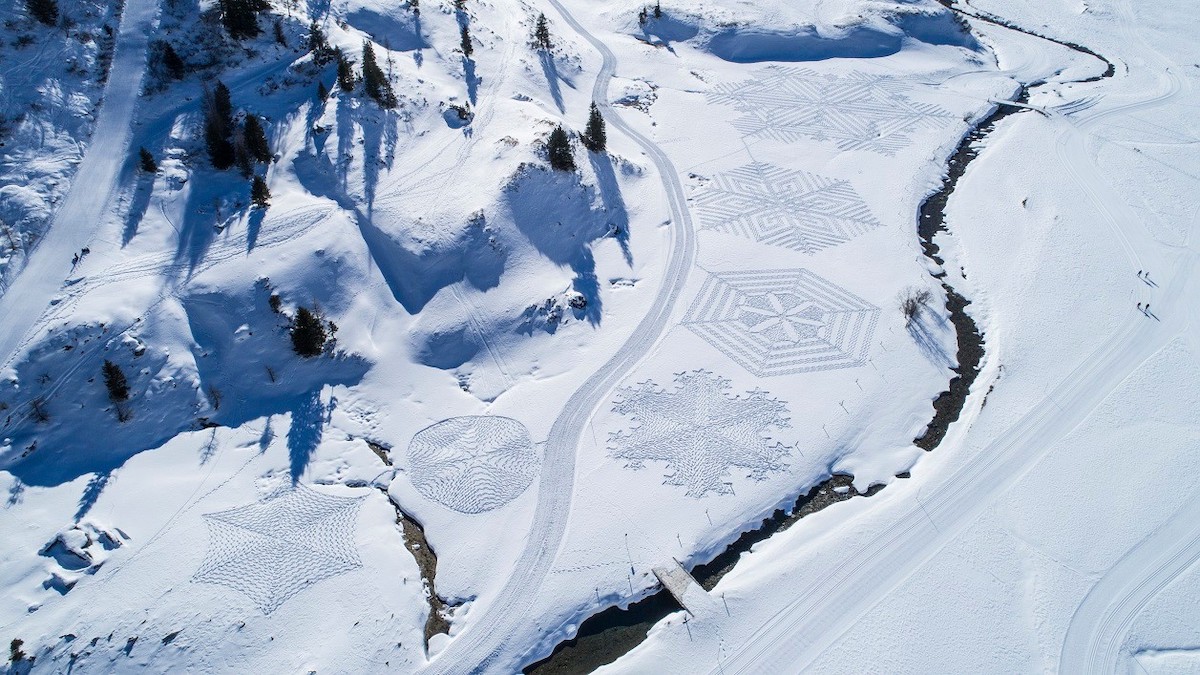 Amazed by this snow art? Share
Like My Modern Met on Facebook
Get Our Weekly Newsletter
Become a
My Modern Met Member
As a member, you'll join us in our effort to support the arts.
Become a Member
Explore member benefits 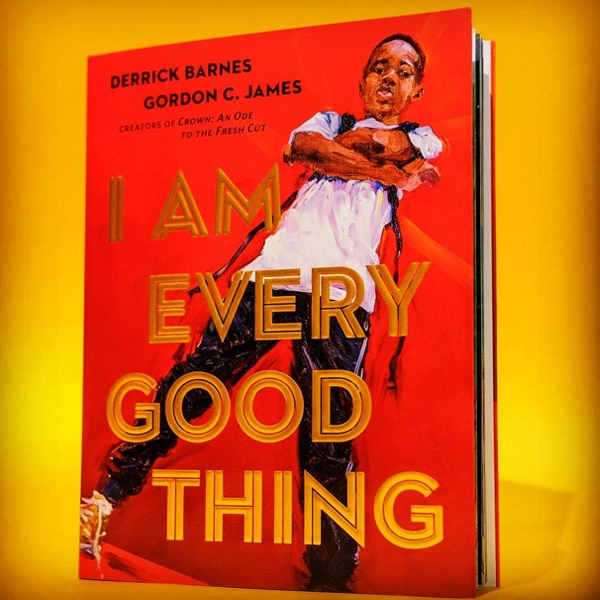