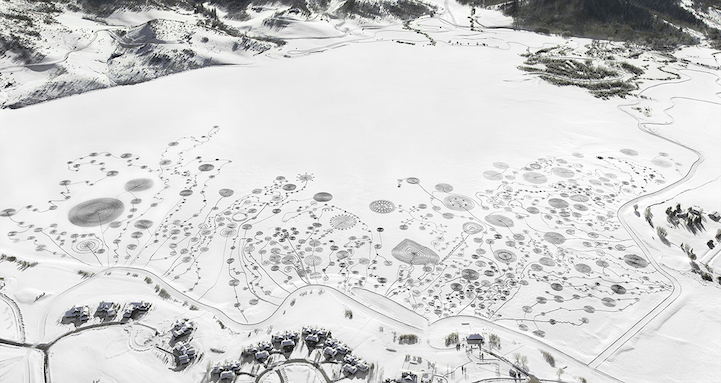 Last February, artist Sonja Hinrichsen and over 60 volunteers created this spectacular work of land art, titled Snow Drawings at Catamount Lake, by trekking out onto the frozen Catamount Lake in Colorado while wearing snowshoes, forming intricately swirling patterns over several miles of snow. The stunning piece is part of her Snow Drawings series, an ongoing project that allows Hinrichsen to engage with the community through the creation of these large-scale, temporary interventions in nature.

“The creative process itself constitutes a significant part of this work. It is important to me that participants experience the elements of nature while they help me transform their own familiar snow landscape into a piece of art,” Hinrichsen writes in her artist statement about the project. “I hope that the aerial photographs that I take right after completion of each piece can demonstrate also to a larger audience how the landscape is transformed into a piece of art through a system of designs. This changes our perception of the landscape and accentuates the beauty and magic of the natural environment, and thus inspires awe and appreciation for art as well as for nature. I deem this important – especially as modern society becomes increasingly disconnected from the natural world.”

Update: We had the opportunity to ask the artist a few questions about her work. Be sure to read that exclusive interview, below. 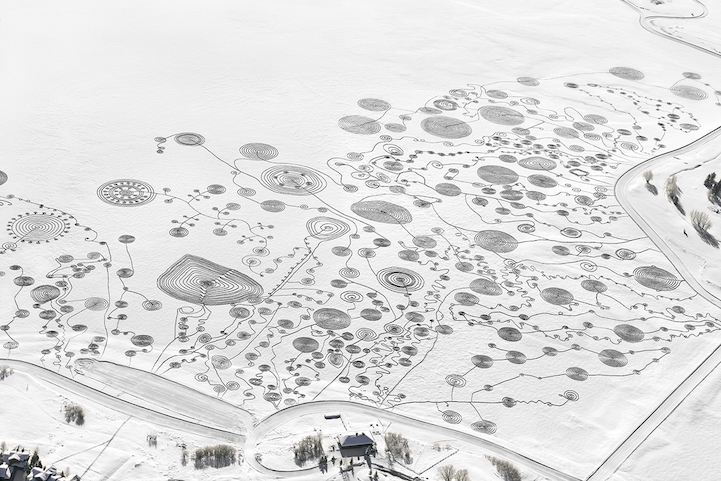 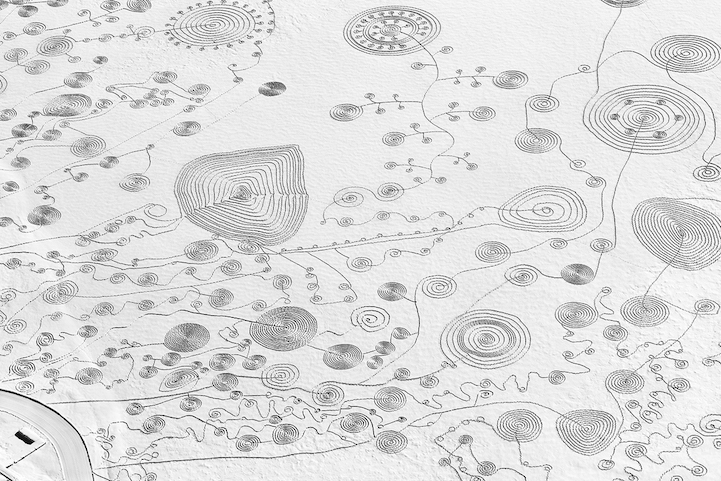 Can you walk us through your process, from beginning to end?

It's very intuitive, meaning that it happens in the moment, in the process. It's not something that's preconceived, there's no pre-designed scene that I'm laying out on the snow. I don't make a drawing on a sheet of paper or on the computer and transfer it onto the snow. Instead it happens in the process. I'm working with community volunteers . . . so it wouldn't be possible to coordinate a preconceived design, even if I wanted to (and I don't – I love the unpredictable aspect of it). Basically, I just define the area that we work in. Sometimes it's a frozen lake, for instance, and then I spread out the people along the area, so people would start from different points along the shoreline. Oftentimes I give a talk or a workshop the day before, where I also show them previous work. I explain to them how it works, what kinds of patterns and movements we're working with. On the spot before we start, I give them a briefing, show them drawings that depict examples of the patterns. I instruct to “walk spirals, from inside out, then connect seamlessly to the next spiral and the next. If you want to get out, work your way back toward the shoreline.”

I chose the spiral as a central shape because it's easy to do since it's something that's almost inherent in us, there are so many spiral shapes in nature, for instance seedpods, snails and the way water drains. If you walk from inside out, it's easy to get an even circle. I tell them, “You can elaborate on that, you can play with size, make the spirals bigger or smaller, left-turning or right-turning, make them denser or looser by having the tracks closer together or further apart.” This affects the general outcome of the piece; it makes it diverse and interesting. People have done things like walked one big, central spiral, and then smaller spirals around that. So then it becomes really fun and exciting. I don't really ask people to create elaborate patterns, but some decide to do that. It's always stunning to me when I go up and photograph from the air. It's always a great surprise. It's the first time I get a full impression of the piece. From the ground it's not possible to see it all, because the area is flat, especially if we are working on a lake. There is no way to get a perspective of the piece. 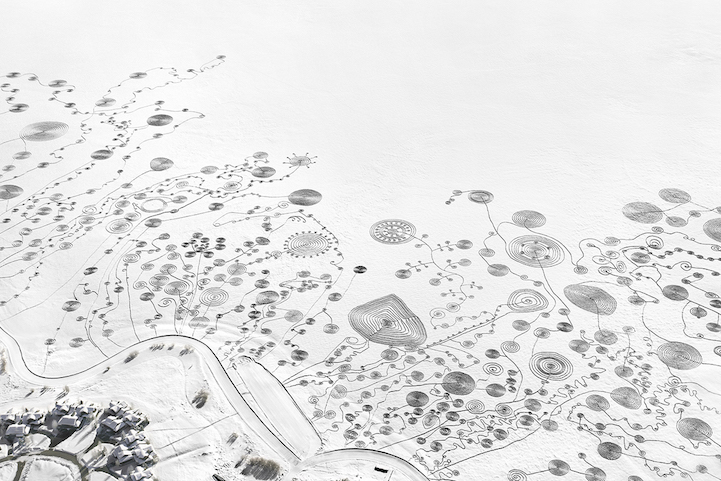 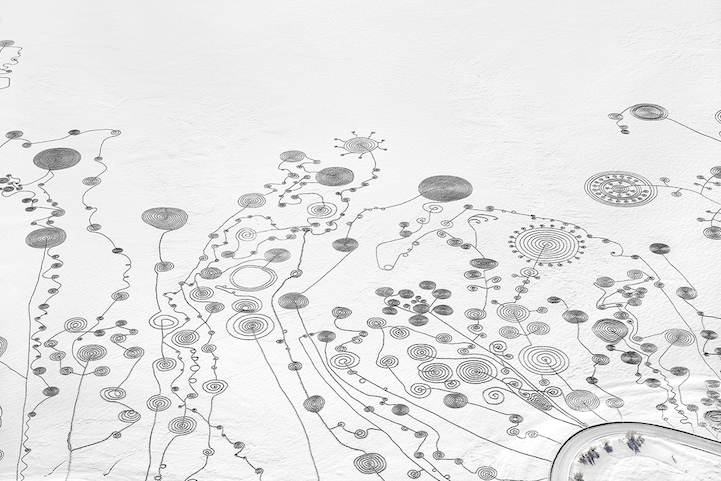 So it's a very organic process?

Yes, it's very organic. I like that about this project. There are a lot of unpredictable factors–the volunteers and how they work is a big unknown, then the weather, of course. If there is a snowstorm we can't perform the piece. Some of the bigger pieces run over a three-day weekend, and if it snows in between the 3 days it's all gone. Luckily, this has not happened to me so far. I've always been able to photograph the work before it got snowed over. Last year in France I had a situation where I had to get up in a helicopter unexpectedly during the second day of work, because the forecast predicted snow overnight, so I had to photograph it before. 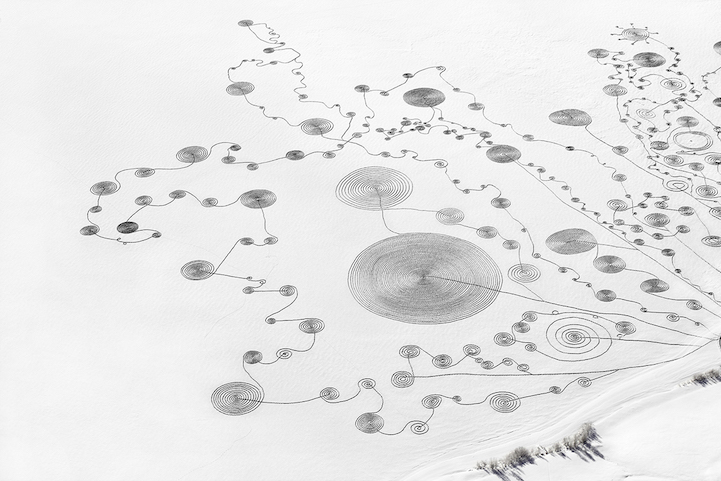 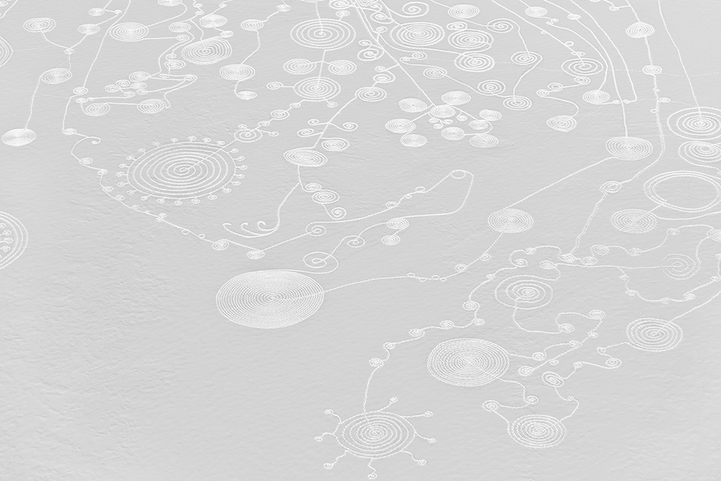 Yes, it's collaborative. Part of this project really focuses on experience, on giving people this opportunity not only to participate in a big, collaborative art piece, but also to be out in nature and to experience the deep nature, the winter experience. They're out there sometimes for hours on end walking spirals. It's kind of meditative. They walk on the snow, crunch crunch with every step. It's a very different experience from skiing for instance, a much deeper nature experience. That's a big focus of this work. I feel like this is important for us – humanity – as we've become so disconnected from the natural environment we live in. I feel like we need to reconnect with nature. 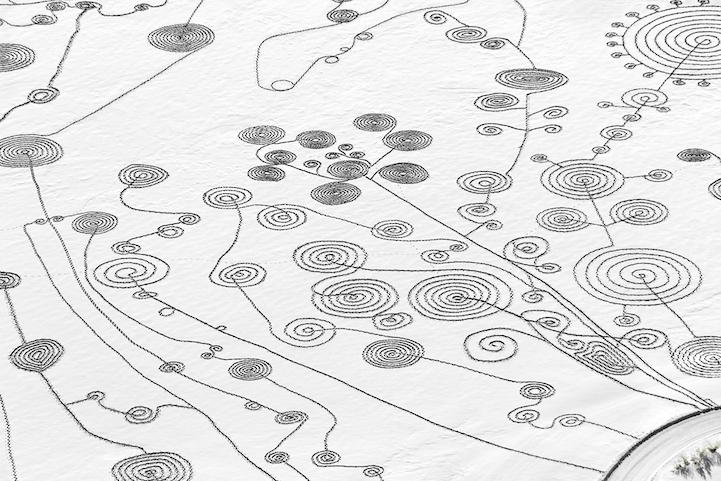 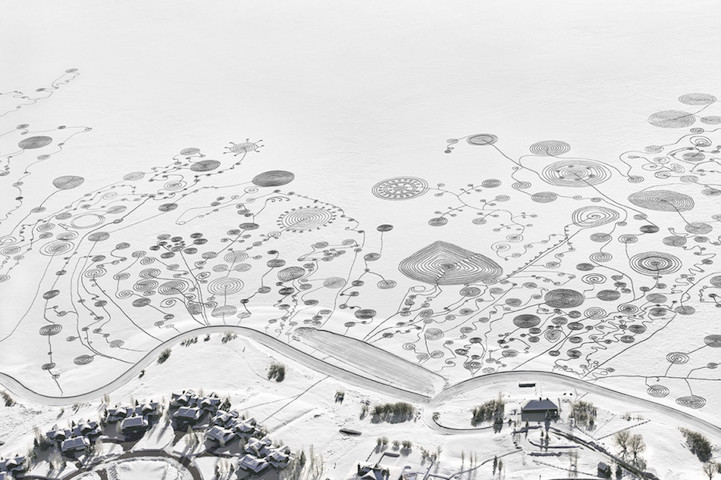 Your pieces can be destroyed within days, weeks, or even hours, so there's a really interesting sense of temporality or ephemerality about them, isn't there?

It could snow the next night, and it's all gone. Snowdrifts are a really big issue in some areas, too. I've done some pieces in Wyoming which was tricky because there's so much wind and the snow is so light, and dry; it doesn't stick at all. So if there's wind, it just drifts and simply fills in the footsteps. There was a situation where I was working alone and, looking back, realized that it was all going away as fast as I was creating it. There are a lot of challenging elements: you have to have enough snow to cover the landscape completely, and also the snow has to be right. If it's too fluffy it's difficult. When we did the piece in Colorado in 2013 it had been snowing for three days in a row right before we started. So there was a lot of fresh snow on top of the lake. It didn't have time to settle before we went out there. It was really hard work, because even with snowshoes – which are supposed to keep you on top of the snow – we were sinking in knee-deep. It was quite a workout, and I was worried that people would not stay for long. But they were so enthusiastic and the piece came together really well. It was amazing. Had the conditions been easier, maybe we would have covered the entire lake, but with the conditions as they were, we were still able to create a pretty impressive piece.

Thanks so much for the interview, Sonja!