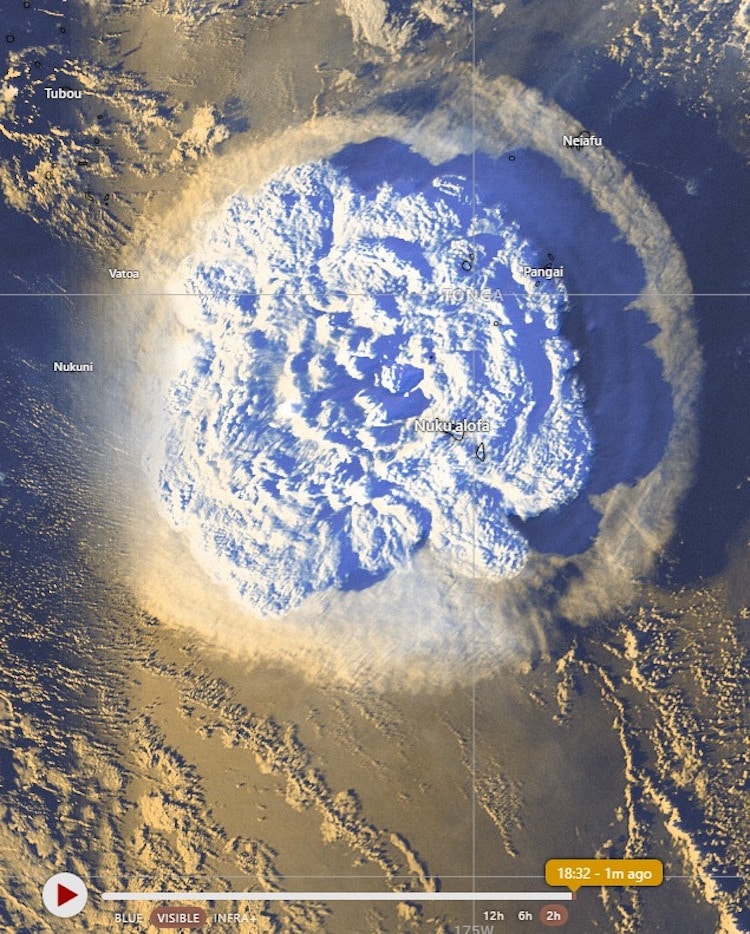 On Saturday, the eruption of a massive underwater volcano in the South Pacific caused a wave of tsunami warnings around the globe. Located close to the island nation of Tonga, the Hunga-Tonga-Hunga-Ha’apai volcano's violent eruption was captured on numerous satellites. After it exploded again on Sunday, the U.S.-based Pacific Tsunami Warning Center stated that a nearly 3-foot-high wave had flooded part of  Nuku'alofa, Tonga's capital.

As communication with the island nation has been difficult since the eruption, New Zealand and Australia have sent planes to assess the damage. The initial blast was so strong that it could be heard both in Fiji—500 miles away—and New Zealand—1,500 miles away. In satellite images taken by Tonga Meteorological Services and Japan's Himawari-8 weather satellite, the enormous plume of smoke and ash that shot 12.4 miles into the atmosphere is clearly visible.

If you aren't familiar, Tonga is a country composed of 170 islands in the South Pacific. More than half the islands are uninhabited, with 70% of the population living on Tongatapu, the largest island. Social media posts showed people fleeing high waves on the island on Saturday, as roads and properties flooded. Luckily, at the moment, no mass casualties have been recorded, though communication with the outer islands has been scarce.

A final video of today's explosive #Tonga #eruption.
This shows data from all three weather satellites covering the area. From left to right: Korea's GK-2A, Japan's Himawari-8 and the US GOES-17.

Hunga-Tonga-Hunga-Ha’apai sits about 20 miles off the coast of Tonga's Fonuafo'ou island. A little over 300 feet is visible above sea level, but the massive volcano actually stretches up 6,500 feet from the bottom of the sea. It's been erupting regularly over the last few decades, with one explosion even creating a new island in 2015.

However, this particular explosion has had far-reaching implications. A large cloud of volcanic ash has slowly been drifting across the South Pacific, reaching Australia on Monday. Immediately after the eruption, tsunami warnings were issued in parts of Japan, Peru, New Zealand, and the United States. Nine-foot waves were reported in northern Japan, while tsunami waves also reached California, Hawaii, and Alaska.

Though it appears that things have now calmed in much of the world, with tsunami warnings being canceled, Tonga is facing a tough battle. Tonga's Speaker of the House Lord Fakafanua issued a statement asking for assistance in providing fresh water and food to citizens. He noted that many areas were affected by “substantial volcanic ashfall,” while acknowledging that “communications remain down and the full extent of the harm to lives and property is currently unknown.”

Both New Zealand and Australia are committing funds to support the relief effort and the International Federation of Red Cross and Red Crescent Societies has a team on the ground with supplies to support 1,200 households.

As communication with Tonga has been scarce, the world has seen the aftermath of the eruption unfold via social media.

The scale of the impact is incredible, with researchers saying that this is the biggest eruption in 30 years.

What it would look like from space if the Honga #Tonga-hunga Ha’apai volcano erupted somewhere in Western Europe.