The next time you stroll past the Chicago River, keep your eyes peeled for a little raft scooping up trash along the river banks. This clever TrashBot is the innovation of Urban Rivers, a non-profit that has already built a floating garden in the river. TrashBot, which was successfully funded on Kickstarter, is a much needed, interactive method of clearing garbage from the water and helps make the river a cleaner environment for the wildlife that call it home.

The story of TrashBot began when Urban Rivers set up their floating garden in the Chicago River. While the installation was a success, the team noticed that the area was becoming overwhelmed by the trash that was floating in the river. At first, they tried to collect the trash by hand, going out on kayaks daily to pick up the floating garbage. However, it was soon apparent that something much more robust was needed, as the trash continued to accumulate.

After assembling a task force to study the best way to tackle the problem, TrashBot was born. Essentially a sophisticated remote control boat, TrashBot herds garbage into designated locations, where it is then collected and sorted. Simple and effective, TrashBot is also fun to maneuver. In fact, it's so entertaining that Urban Rivers wanted to let anyone who was willing to give it a try. To that end, they've made TrashBot interactive and, after it goes live at the end of the month, users will be able to log into the Urban Rivers website and take a turn piloting the boat.

“The technology used for [building our robot] is derived from what you’d use for building a cheap drone,” explains Nick Wesley, one of the co-founders of Urban Rivers. “It’s also now possible to stream video with real low-latency. That perfect storm enables really interesting remote presence projects in environments just like the Chicago River. Taking advantage of this, letting people take control of a robot to clean up trash, makes for a really cool experience.”

If all goes well, they're hoping to expand the number of robots in the Chicago River and take the technology to other waterways in need of cleanup.

TrashBot is a remote controlled boat that helps clear the Chicago River of garbage. 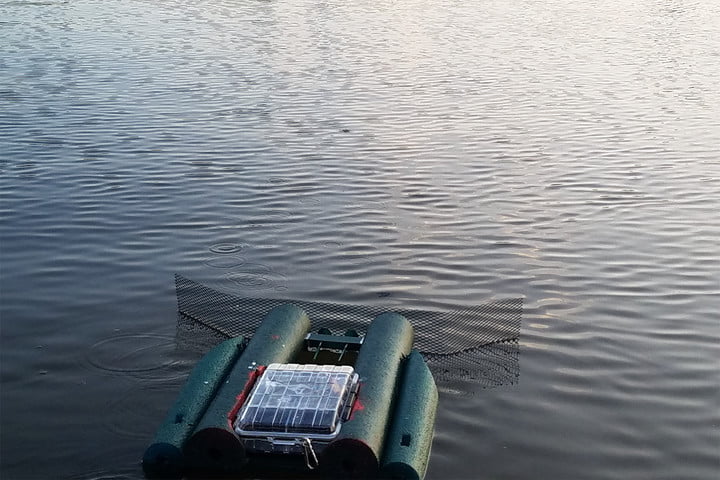 An interactive system lets anyone log in and pilot the raft as it searches for trash and debris.

Learn more about how TrashBot is combating pollution and cleaning the Chicago River.

All images via Urban Rivers.

Excited by this innovation? Share
Like My Modern Met on Facebook
Get Our Weekly Newsletter
Become a
My Modern Met Member
As a member, you'll join us in our effort to support the arts.
Become a Member
Explore member benefits

Excited by this innovation?