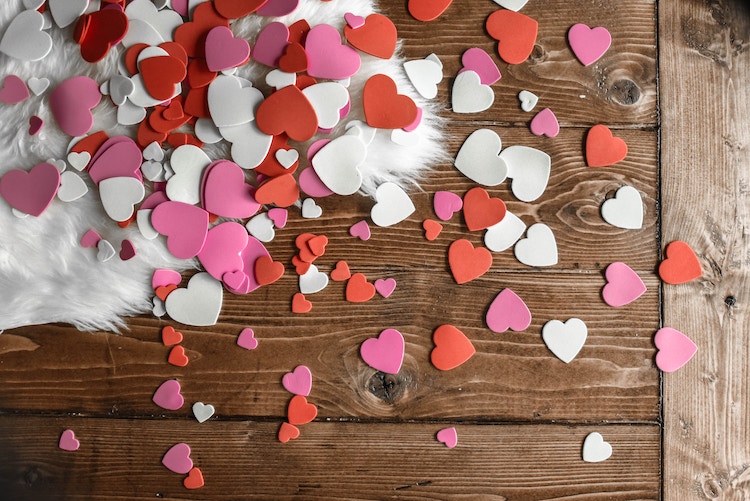 Valentine’s Day conjures up thoughts of chocolates, roses, and romantic dinners, but have you ever wondered where Valentine’s Day comes from? You might be surprised to learn that this holiday’s history isn't as romantic as you might expect.

Though Valentine’s Day, also known as St. Valentine’s Day, is now synonymous with love, its history is quite different. Some scholars believe that the origins of Valentine’s Day can be found in the ancient Roman festival Lupercalia, which was held in mid-February. This ancient fertility rite involved the sacrifice of a male goat and a dog by priests known as Luperci. There was then a sacrificial feast, after which the Luperci took parts of the animal sacrifice and ran around Rome’s Palatine Hill, striking women who came near them with pieces of the animal. This was supposed to render these women fertile.

At the end of the 6th century CE, Pope Gelasius I transformed this festival into something else altogether. Perhaps owed to its timing, Lupercalia is often noted as the historical origins of Valentine’s Day. But the truth is, there’s no hard evidence to support this fact.

Who was St. Valentine?

Once Pope Gelasius I put an end to the Lupercalia, February 14 became known at St. Valentine’s Day. So just who is the saint they were celebrating? The reality is, there is actually more than one St. Valentine. 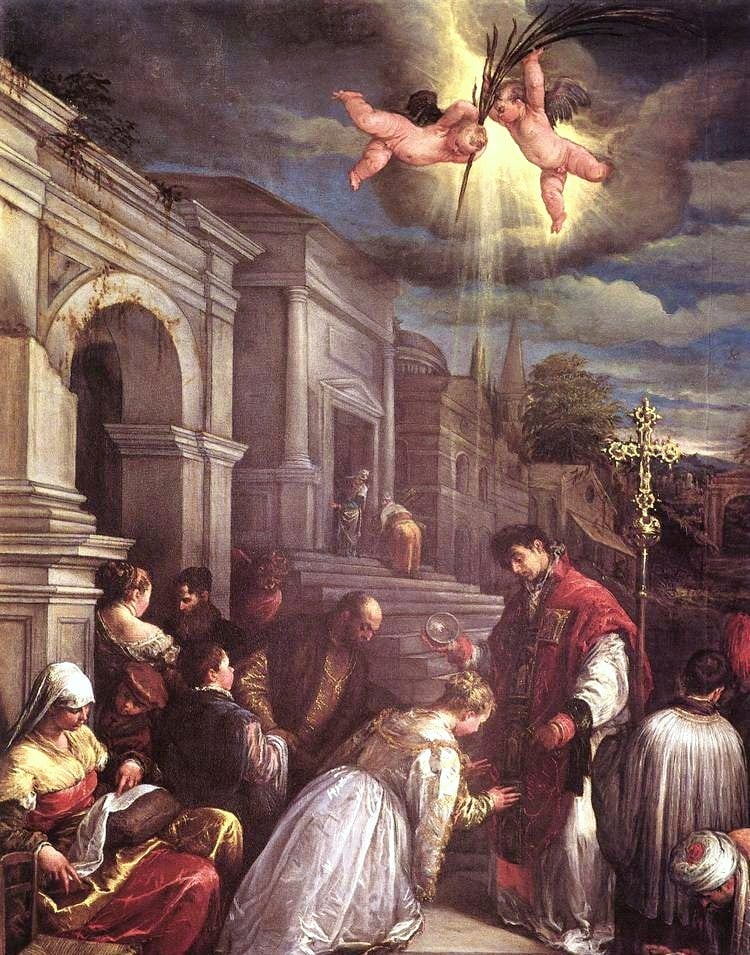 Thanks to a work known as the Acta Santctorum, a 68-volume encyclopedia of the lives of Christian saints published in the 17th century, we have the account of not one, but three St. Valentines. And in an odd coincidence, they both died on February 14—executed in the 3rd century CE during the reign of the Roman Emperor Claudius Gothicus.

Who were these mysterious men? Information is scarce, but we do know that one was a priest in Rome, one was martyred while in Africa, while the third was a bishop from Terni. Unfortunately very little is known about their history, and many legends have embellished what little we do know.

For instance, one medieval myth told of Valentine secretly performing Christian marriages in an era when the Emperor had forbidden it. When this was discovered he was jailed and killed. In another legend, Valentine was imprisoned by the Emperor and, while there, fell in love with the daughter of his jailer. Before he was killed, he supposedly passed her a letter signed, “from your Valentine.” Later, this would become a common phrase printed on Valentine’s Day cards.

But for all these wistful fantasies, aside from the date they were martyred, there’s not much known. In fact, in 1969 the Catholic Church removed St. Valentine from the General Roman Calendar, so February 14 is no longer an official feast day.

Martyred saints don’t typically conjure up romantic thoughts, so how did Valentine’s Day start its close association with love and romance? It all starts with Geoffrey Chaucer, author of The Canterbury Tales.

“Hamlet” from The Works of Shakspere / Revised from the best Authorities / With a Memoir, and Essay on his Genius / By Barry Cornwall / Also Annotations and Introductory Remarks on the Plays by Many Distinguished Writers / Illustrated with Engravings on Wood, From Designs / By Kenny Meadows / Tragedies / Vol. II. 1846. (Photo: Victorian Illustrated Shakespeare Archive)

In his 1382 poem Parlement of Foules, Chaucer wrote: “For this was on St. Valentine's Day, when every bird cometh there to choose his mate.” During Chaucer's time, birds began pairing off and mating around mid-February, and soon the European nobility started sending love notes around this time of year.

The earliest surviving valentine comes from this period, when the French Duke of Orléans wrote a sweet note to his wife during his imprisonment in the Tower of London. Written in February 1415, he affectionately calls her “my very gentle Valentine.”

As time went on, romantic connections continued to appear more frequently in literature. Even Ophelia called herself Hamlet’s Valentine in Act IV, Scene 5 of William Shakespeare’s Hamlet: “To-morrow is Saint Valentine's day, All in the morning betime, And I a maid at your window, To be your Valentine.” 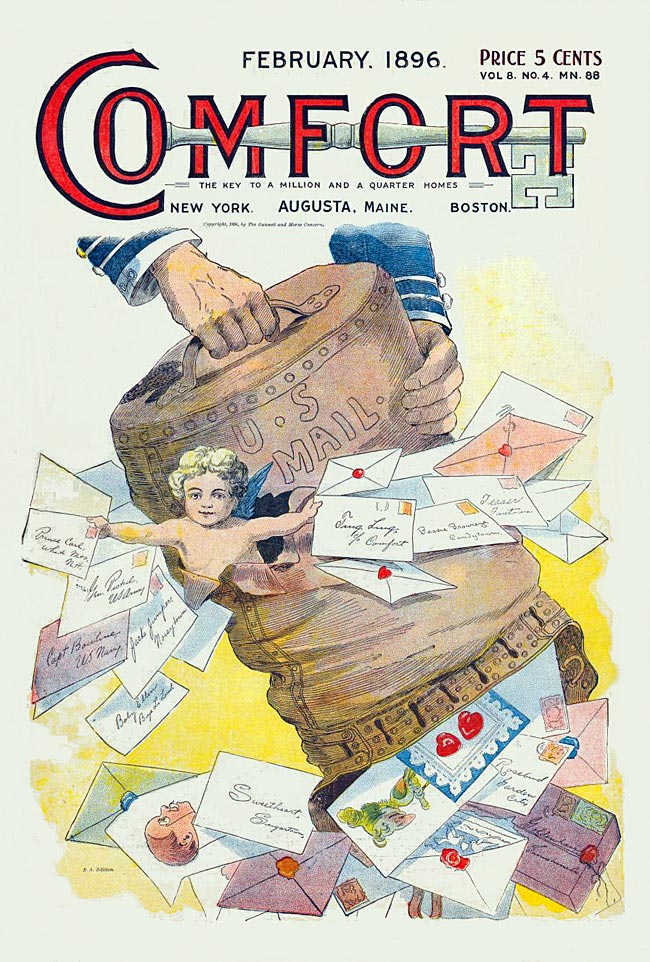 Paper valentines began replacing handwritten notes toward the end of the 18th century. Quite popular in Victorian England, they were often made with real lace and ribbons. After the postage stamp was invented in 1840, there was an explosion of Valentine’s Day cards in the UK. Nearly half a million cards were sent the year after its invention, with factories set up to help keep up with the production demand.

In the United States, industrialized Valentine’s Day cards started in the mid-19th century. One woman, Esther Howland, was inspired by English cards and imported paper lace and other decorations to sell at her father’s stationery shop in Massachusetts. 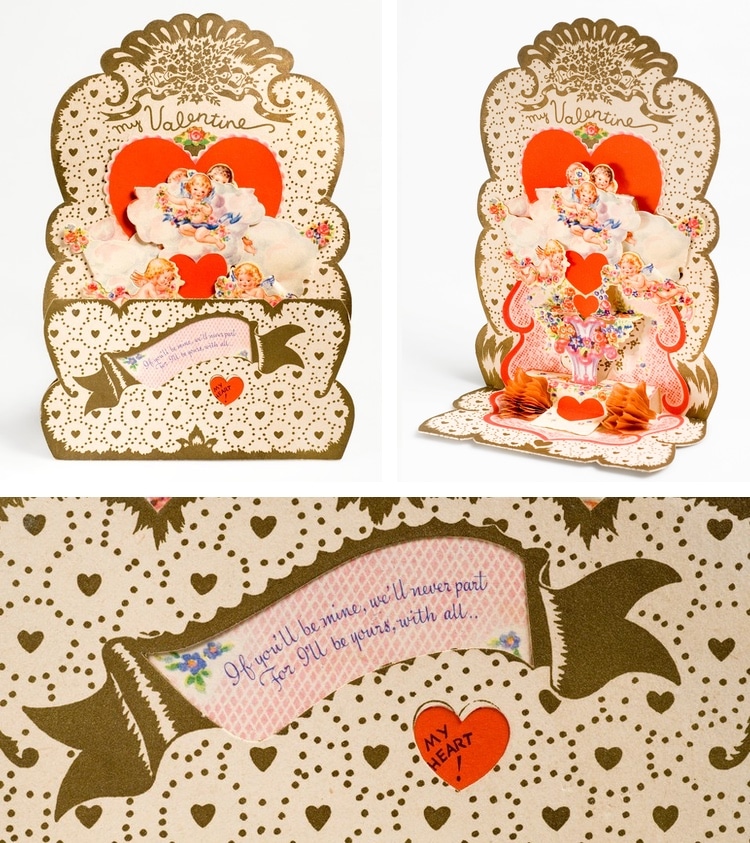 The industrial revolution helped speed things up enormously, and soon there were all sorts of cards being mass produced. This ranged from simple cards with embossed Cupids to more complex pop-up and cobweb valentines—where moving a string revealed a secret image.

From Heart-Shaped Chocolates to Conversation Hearts

Gifts were always given in tandem with exchanging valentines, and we have Cadbury to thank for those heart-shaped boxes of chocolates that are synonymous with the holiday. Initially called Fancy Boxes, Cadbury created them in 1868, paving the way for sweets to become associated with the holiday. 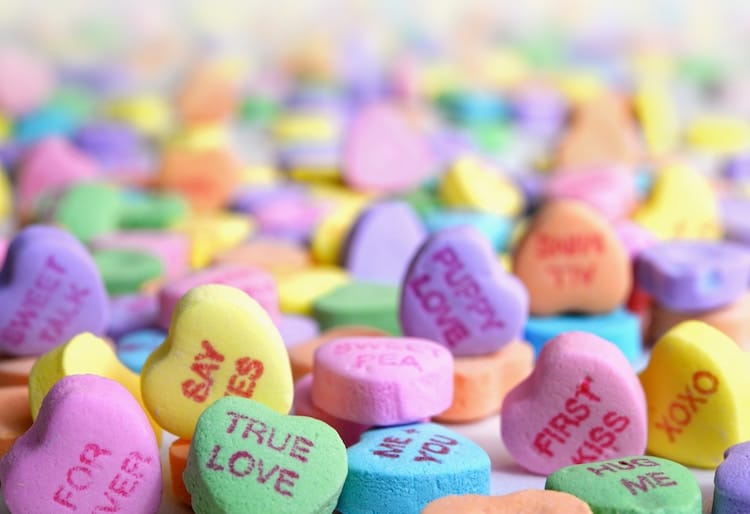 Another Valentine's Day favorite that started in the mid-19th century is conversation hearts. Also knowns as Sweethearts, these confections were created by the Chase brothers, who owned a candy factory in New England. In 1847, they invented a machine that could cut shapes from wafer candy and in 1866 they were also able to print sayings on the candy. These predecessors of Sweethearts were often used at weddings and stamped with cute, celebratory phrases.

Sweethearts as we now know them were first produced in 1901. The company founded by the Chase brothers would go on to become the New England Confectionery Company (Necco), which continued to manufacture them until going out of business in 2018. Spangler Candy Company, which purchased Necco, says that Sweethearts will be back on the shelves in 2020.

As the United States' most popular Valentine's Day candy, it's estimated that that Necco produced over 8 billion hearts annually. Sayings on the hearts continue to evolve with the times. These days, classic phrases like “Be Mine” are found side by side with modern catchphrases like “Email Me.”

These days Valentine’s Day is a big boon for retailers, who line their shelves with chocolates, cards, jewelry, and flowers to make sure we have everything we need to ask the perfect person to be our Valentine.

How Other Cultures Celebrate Valentines Day

Valentine’s Day isn’t always about romantic dinners, flowers, and chocolates. In other parts of the world, they have their own loved-up traditions.

Argentinians don’t celebrate Valentine’s Day on February 14. Instead, they have an entire “week of sweetness” in July. During this time, lovers exchange kisses for chocolates and other sweets.

Couples in South Korea celebrate the day of love on the 14th of every month—not just in February! In May, there’s the “day of roses,” in June, “the day of kisses” is celebrated, and in December, there’s “the day of hugs.” There’s even a “black day” in April when single people gather to console themselves by eating black-colored noodles. 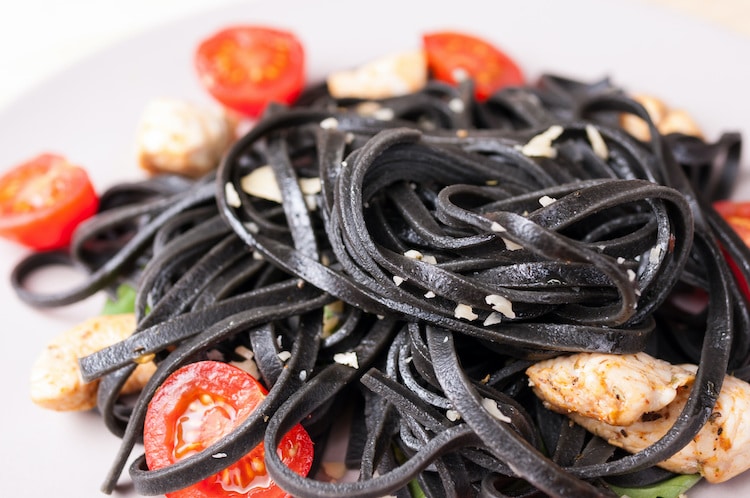 In the Philippines, Valentine’s Day is a popular time for mass weddings. Hundreds, or even thousands, gather to tie the knot in unison. This huge event is often sponsored by the government as a form of public service.

On February 14, Ghana celebrates “National Chocolate Day.” The sweet holiday was first celebrated in 2007, when the government tried to increase the country’s tourism. On the special day, restaurants have chocolate-themed menus and there’s also live performances and music events. 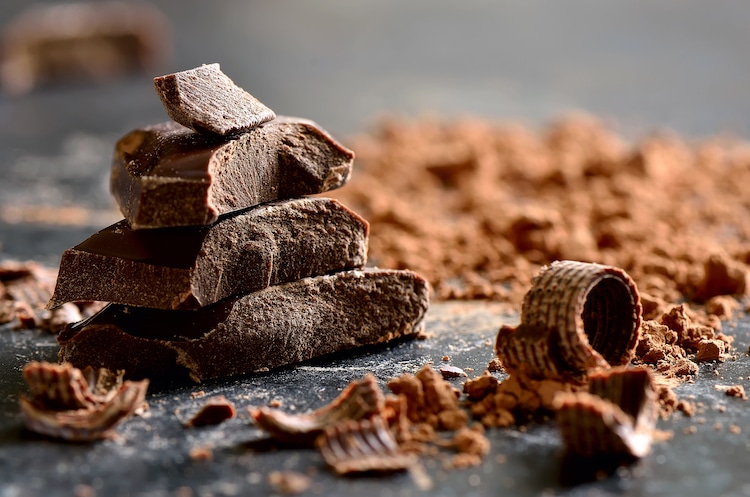 In Miao, southwest China, the “Sisters’ Meal” festival is celebrated on March 15. During the festival, women wear silver accessories and beautiful dresses, and cook colorful rice dishes that they wrap in silk. They offer the wrapped meals to young men. The fate of the relationship depends on the item found within the rice. Two chopsticks means love, but a clove of garlic means the romance is over before it even got started.

Romanians celebrate love and the beginning of spring on February 24, when many couples get engaged. Young men and women go to the forests to pick colorful flowers, while other couples wash their faces with snow as a sign of good luck. 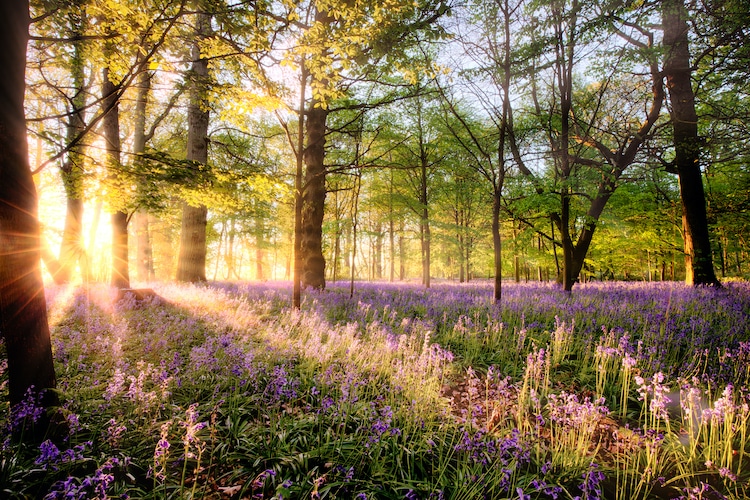 In the West, it’s usually the women who get spoiled. However, on February 14 in Japan, there is a heteronormative tradition in which women buy gifts and chocolates for their male companions. Men can’t return the favor until March 14, which is called the “White Day.” For same-sex couples, females tend to exchange gifts on Valentine’s Day and males exchange gifts on White Day.

In Slovenia, St. Valentine is one of the patron saints of spring. On February 14, plants start to regenerate, marking the first day of farming in the fields. Another popular belief is that birds “propose” to each other on this day. In order to witness this chirpy occasion, you must walk barefoot through fields that are often still frozen.