A peek inside the Metropolitan Museum of Art's Department of Drawing and Prints reveals a sweet surprise for Valentine's Day…nearly 200 years ago. Among the vast collection are historic valentines from the United States and Europe that speak to a time when sending cards reached its apex.

In the 19th century, with commercially printed cards now available, sending and receiving gifts and notes for Valentine's Day became a hallmark of Victorian life. And as such, increasingly intricate cards were developed to help lovers send a special message.

One of the most interesting types of cards produced in the mid-19th-century is called a cobweb valentine. Both handmade and purchased, intricate patterns were carefully cut into a thin layer of paper. A moveable valentine, a small thread tied to the end of the circular cut pattern would allow the recipient to pull the paper layer upward, revealing a secret.

Perhaps it was this “for your eyes only” concept that made the cards so popular. It's estimated that 60,000 were sent in the 1830s and 1840s. One of the most complex cobweb cards in The Met's collection actually has its web hidden inside a neatly folded paper compartment.

All the cards, sprinkled with symbol flowers, romantic landscapes, and portraits of young women, speak to a time and tradition uniquely Victorian. Thanks to avid collectors, we're able to use these treasures to remember the cultural traditions of times past. 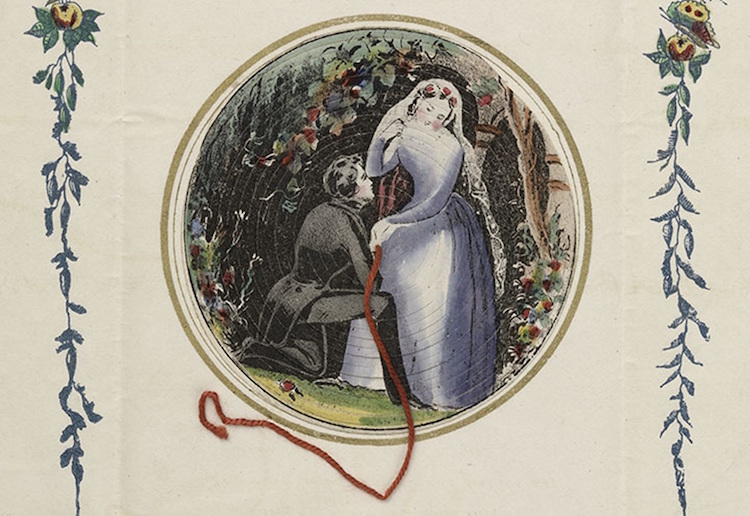 All images via The Metropolitan Museum of Art.

How beautiful! Share
Like My Modern Met on Facebook
Get Our Weekly Newsletter
Become a
My Modern Met Member
As a member, you'll join us in our effort to support the arts.
Become a Member
Explore member benefits
How beautiful!