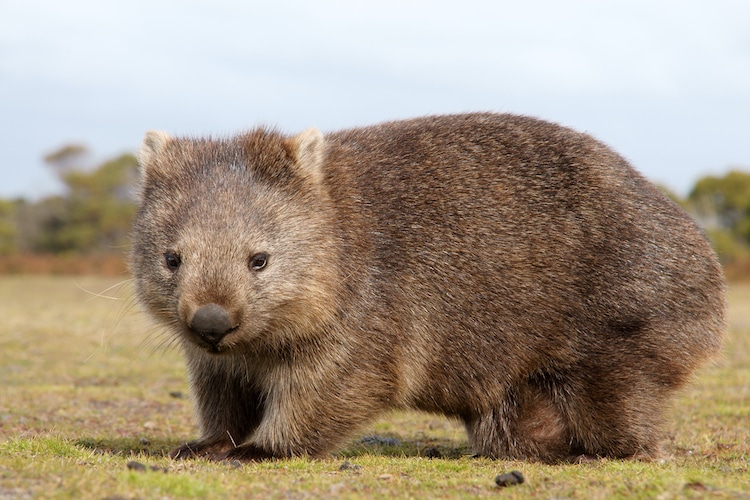 As the Australia bushfires rage on, one of the main concerns is how the wild animals are affected by this environmental catastrophe. With an estimated half-billion creatures hurt or dead from the flames, people around the world are looking for glimmers of hope for them. Unfortunately, not all of the good news you read is true. A series of viral social media posts about wombats is a prime example of this. Some tweets claim that wombats are not only sharing their ground burrows with other animals but that they are actively leading other species to their shelters. If this sounds like something out of a fairytale, it most likely is—the truth is a bit more complicated.

One reason that the shepherding idea is probably false is due to the wombats' vision. They are very shortsighted and mostly focus on what’s in front of them and what’s important (food), so they presumably wouldn’t lead other animals into their burrows. But, they are still capable of extraordinary behavior. Jackie French, author and director of The Wombat Foundation, has an anecdotal story of a wombat who befriended her and showed her around a bush. “But he didn't shepherd—he just waited, looking around to see if I followed,” she explained to IFLScience.

Another reason the tweets are probably inaccurate is that wombat burrows are no secret to other creatures. “It's unlikely any shepherding would be necessary,” French said. “[Other animals] would know the wombat warrens existed and are intelligent enough to seek shelter.”

Wombat burrows are more complex than you might think. With multiple passageways and entrances, they can span hundreds of feet, and the warrens are deep enough in the ground and well ventilated that they're protected from the flames. The burrows are so large that it’s not unusual, in more peaceful times, for other species to be in them and never cross paths with the wombats. (This is a good thing, as wombats can be “cantankerous” towards others.) With these extreme environmental conditions, however, it’s possible that wombats are more tolerant of other species sharing their space even if they see them underground. But shepherding? Likely not.

Posts on social media are claiming that wombats are shepherding other species into their deep underground burrows during the Australian bushfires.

Apparently wombats in fire effected areas are not only allowing other animals to take shelter in their deep, fire-resistant burrows but are actively herding fleeing animals into them.

We’re seeing more leadership and empathy from these guys than the entire Federal government. pic.twitter.com/LGcpSu9x0M

hi I’ve been reading about wombats in Australia sharing nay even herding other animals into their underground burrows to shelter from the devastating fires, and during my reading I came across this ABSOLUTE UNIT. I hope Patrick brightens your evening as much as he did mine pic.twitter.com/7tLhDkbzMF

Reports from Australia that countless small animals have escaped death because wombats, unusually, opted to share their massive, complex burrows. E̶v̶e̶n̶ ̶r̶e̶p̶o̶r̶t̶s̶ ̶t̶h̶a̶t̶ ̶t̶h̶e̶y̶ ̶h̶a̶v̶e̶ ̶b̶e̶e̶n̶ ̶o̶b̶s̶e̶r̶v̶e̶d̶ ̶e̶x̶h̶i̶b̶i̶t̶i̶n̶g̶ ̶”̶s̶h̶e̶p̶e̶r̶d̶i̶n̶g̶ ̶b̶e̶h̶a̶v̶i̶o̶r̶.̶”̶ (we shared this from a social media post from Australia, but it turns out it’s not true)

While it sounds sweet, the claims are untrue. Wombat behavior doesn't include leading other animals to their warrens. Creatures know the burrows exist and go there on their own without ever encountering the wombats.

During these extreme environmental conditions, it is possible the wombats are knowingly sharing their burrows with other species—but it's highly unlikely they're shepherding other animals.