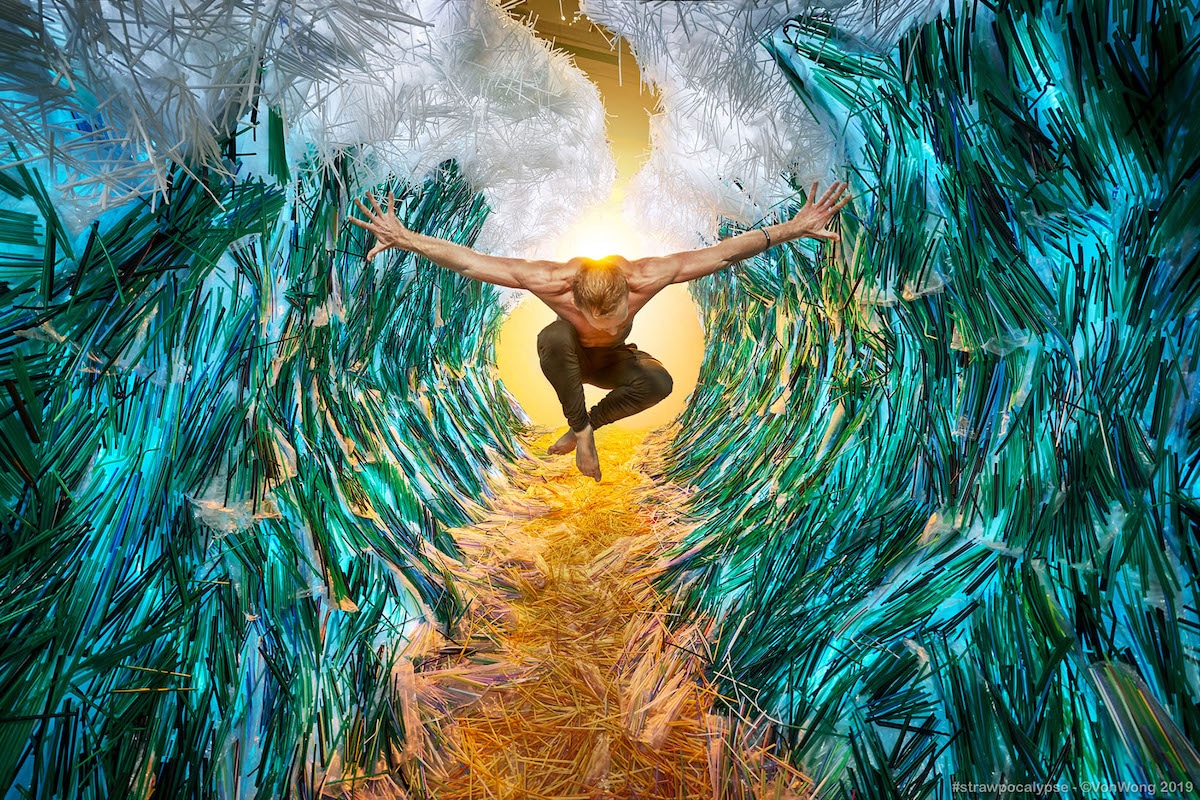 Photographer Benjamin Von Wong has dedicated his career to creating over the top images with a social message. Pushing his creative boundaries, he's able to spotlight environmental issues and raise awareness about the waste we produce and how we can make a difference. For his latest piece of art, he was inspired by the phrase, “It's just one straw, said 8 billion people.”

Though plastic straws may seem like a drop in the bucket when thinking about plastic pollution, the truth is that they're nearly impossible to recycle. The Plastic Pollution Coalition estimates that over 500 million plastic straws are used daily in the United States, with people coming to expect them at any cafe, restaurant, or coffee shop. But, as Von Wong points out, these straws are one of the easiest types of single-use plastics to refuse.

Wishing to show the public how small decisions can have a big impact, Von Wong set about creating his Strawpocalypse installation. Rather than simply purchasing the more than 100,000 straws needed, he went about things the hard way. In collaboration with Zero Waste Saigon, Starbucks Vietnam, and hundreds of volunteers, he managed to gather 168,0000 plastic straws over the course of six months. 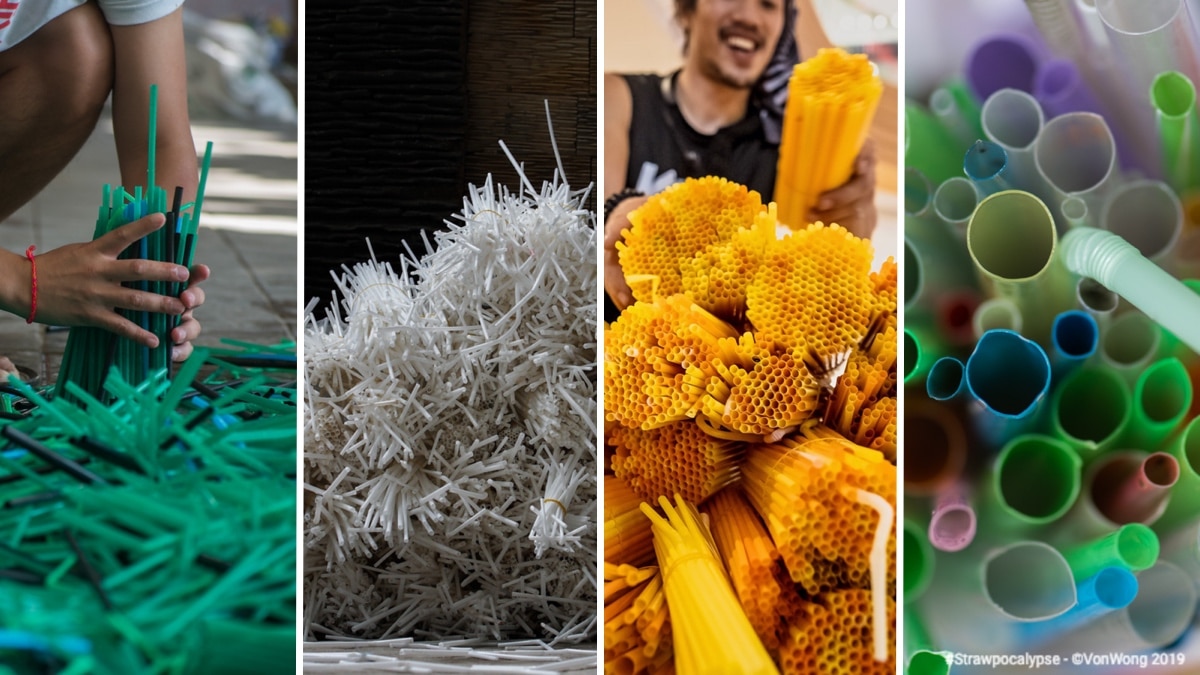 “The plastic problem is either out of sight, out of mind—or so omnipresent that it becomes invisible. I wanted to use art to tackle both angles—by creating something beautiful and unique out of an environmental tragedy,” writes Von Wong.

To make his vision of the “parting of the plastic sea” come to life, volunteers spent two weeks washing and sorting the straws by color. Green, black, and blue straws were used for the body of the wave, white for the froth, and yellow for the sand. Transparent straws were also used for transition points and to fill in.

Making this a truly upcycled art installation, plastic bags gathered by the team acted both as supports for the straws and LED light diffusers. An assembly line came together to construct the complex structure, which ended up reaching a height of nearly 11 feet (3.3 meters). The straws were arranged like the strokes of a paintbrush along a skeleton built by a set designer, giving the illusion of parting seas.

The full installation is now viewable at Estella Place in Ho Chi Minh until March 24, 2019. By creating such a large sculptural piece, Von Wong hits the public with the reality of how one small straw can add up to a big problem.

Read more about how Strawpocalypse came together on Von Wong's blog.

Von Wong used 168,000 plastic straws to create an 11-foot wave in an effort to draw attention to plastic pollution. 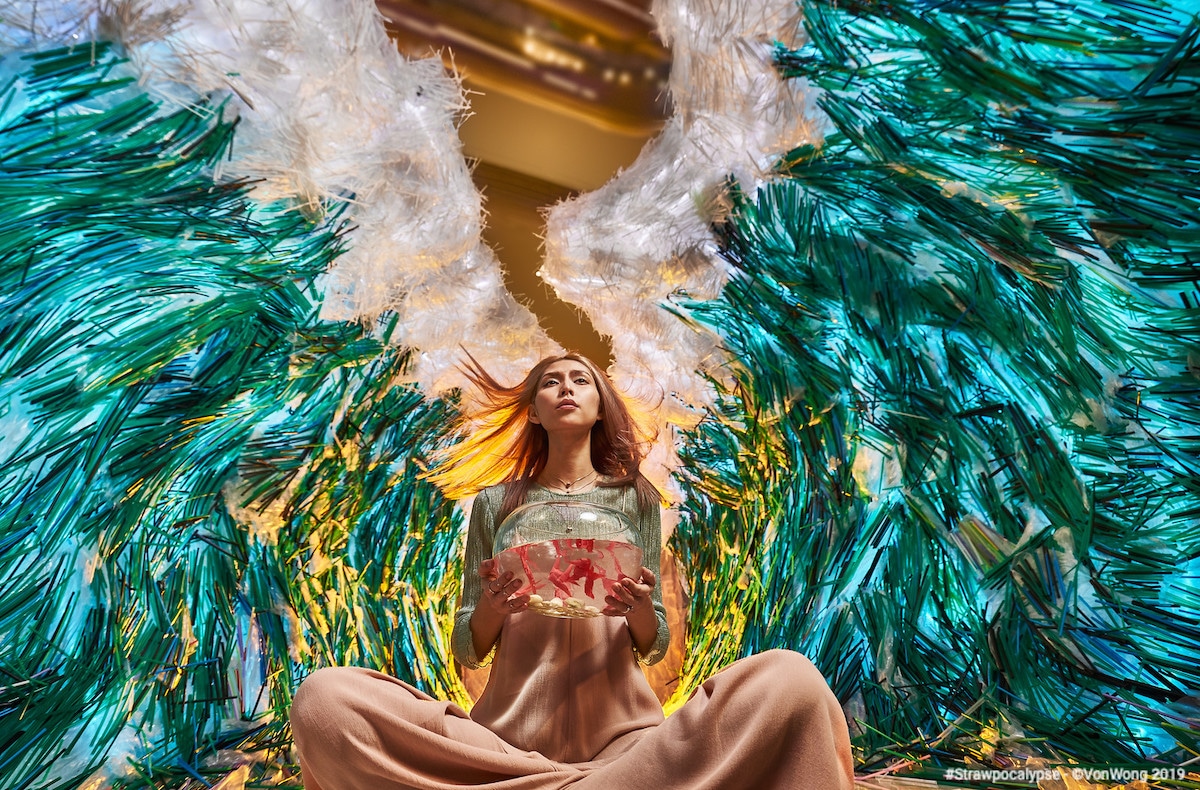 A huge team of volunteers worked together and spent six months to gather, sort, and assemble the straws. 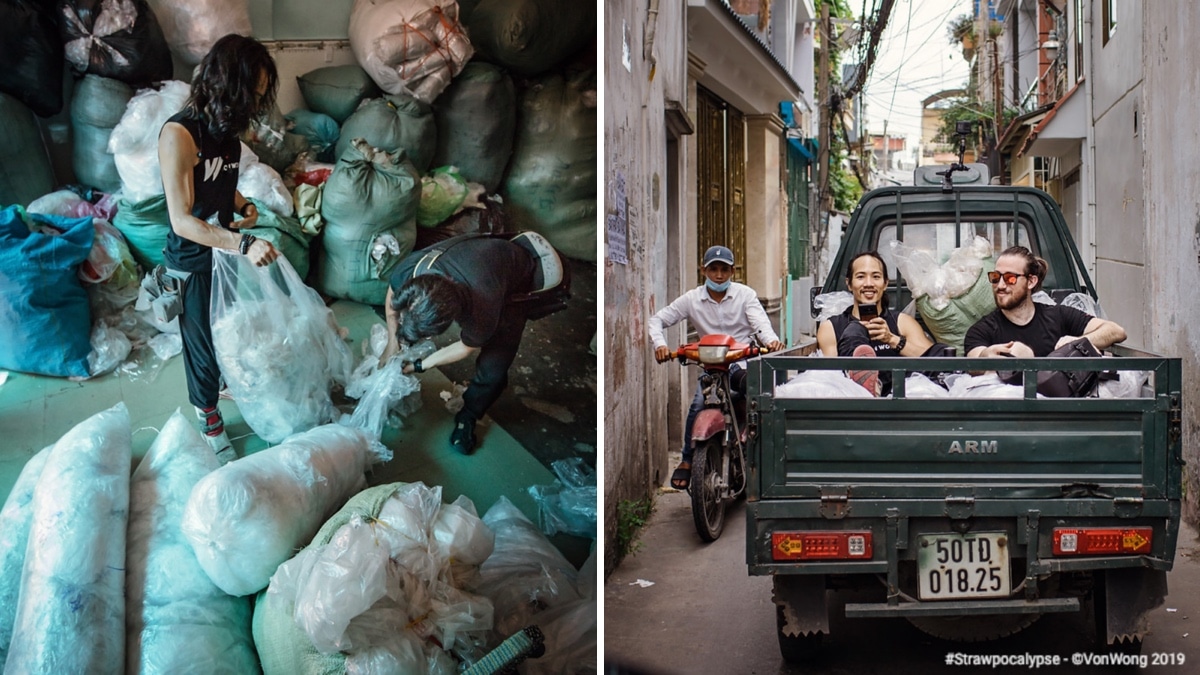 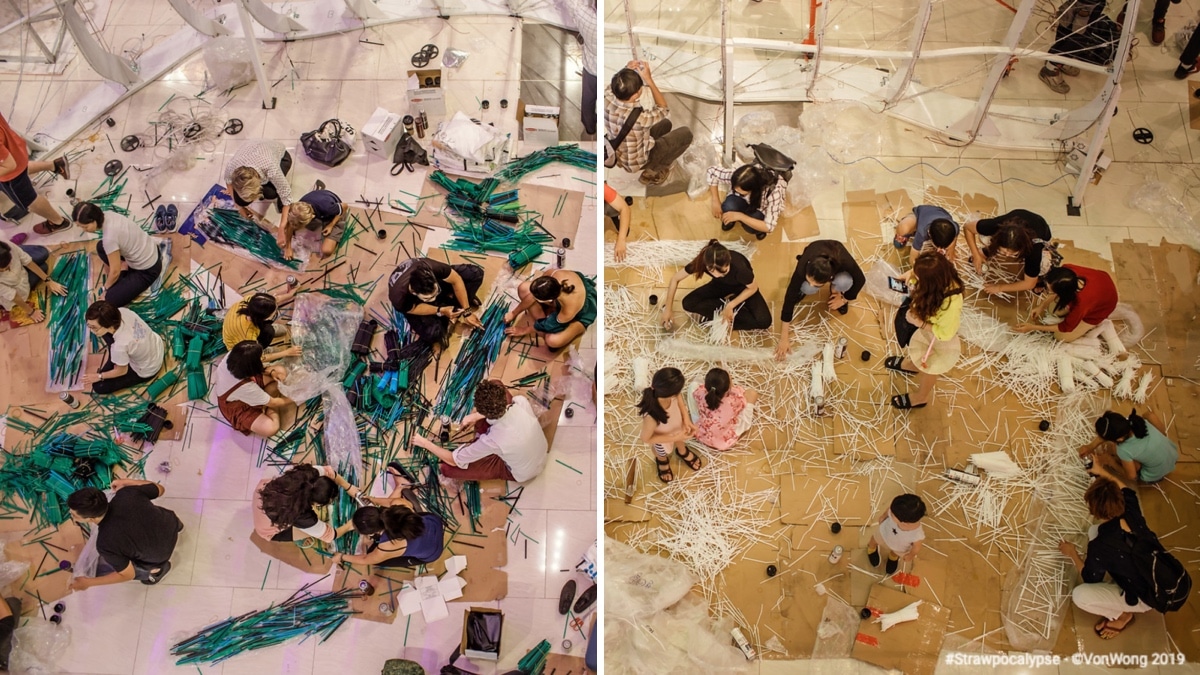 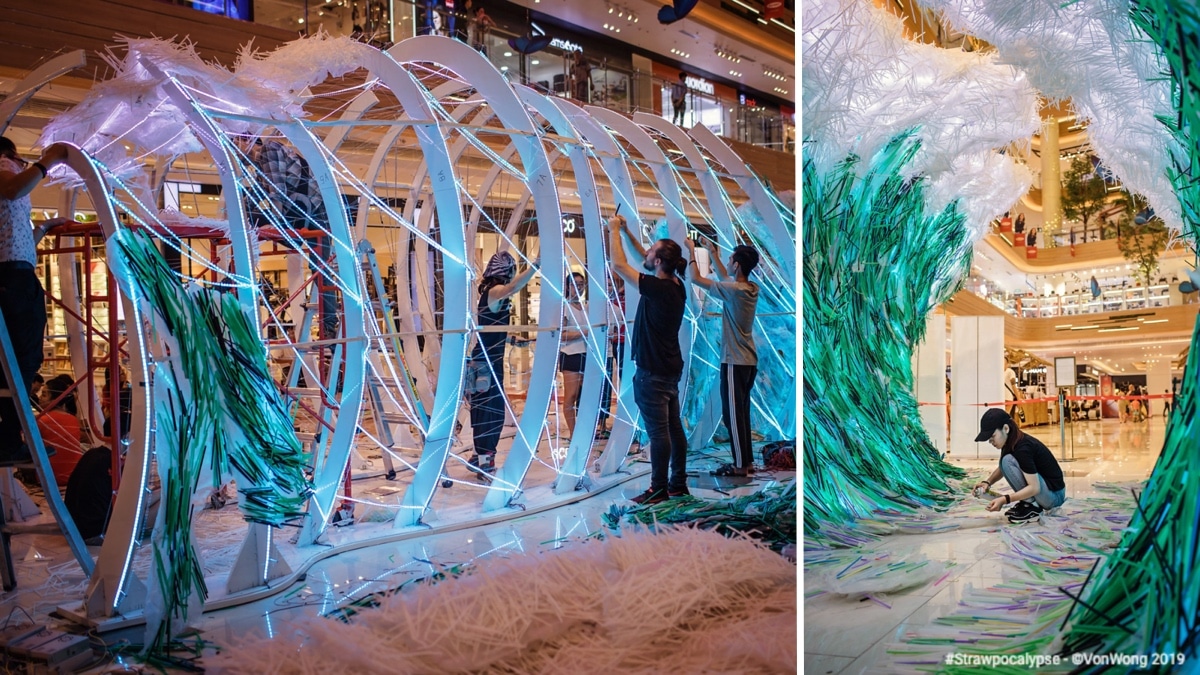 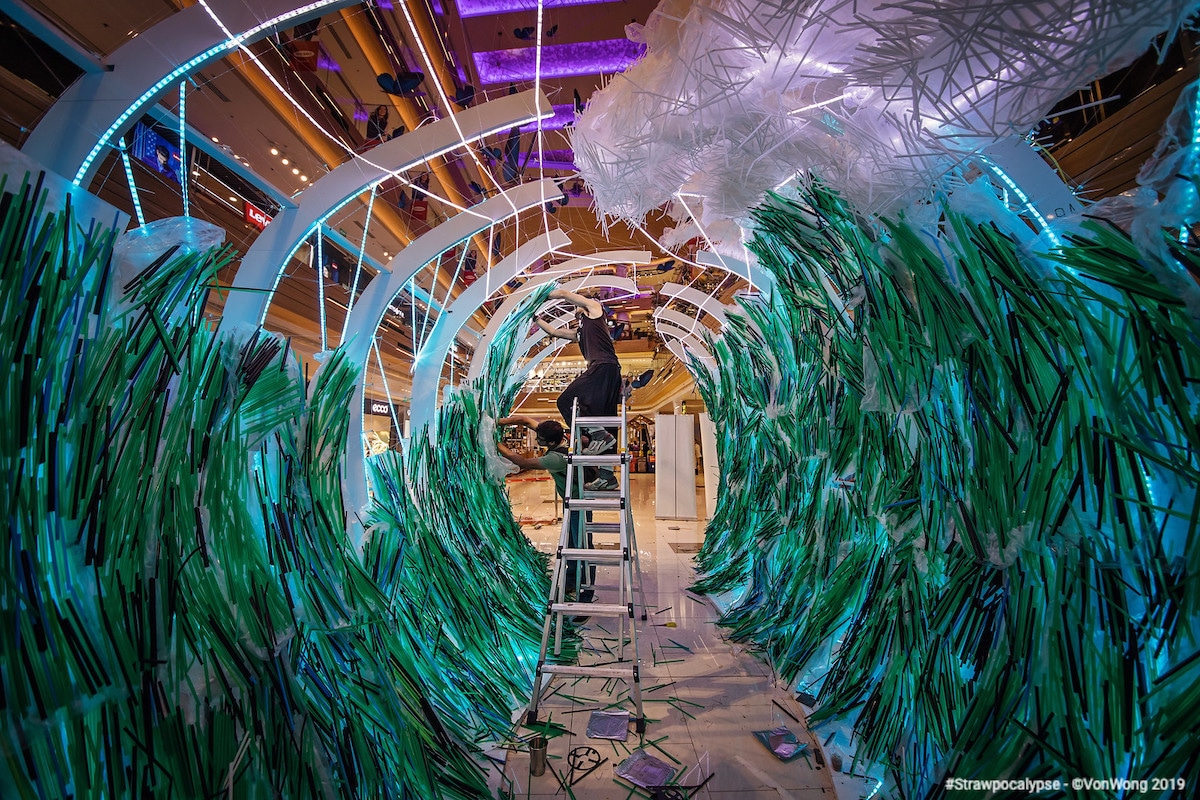 “Although this installation is made from straws, it isn't just about straws. It's about taking a first step towards paying attention to the plastic epidemic threatening the oceans we rely on.” 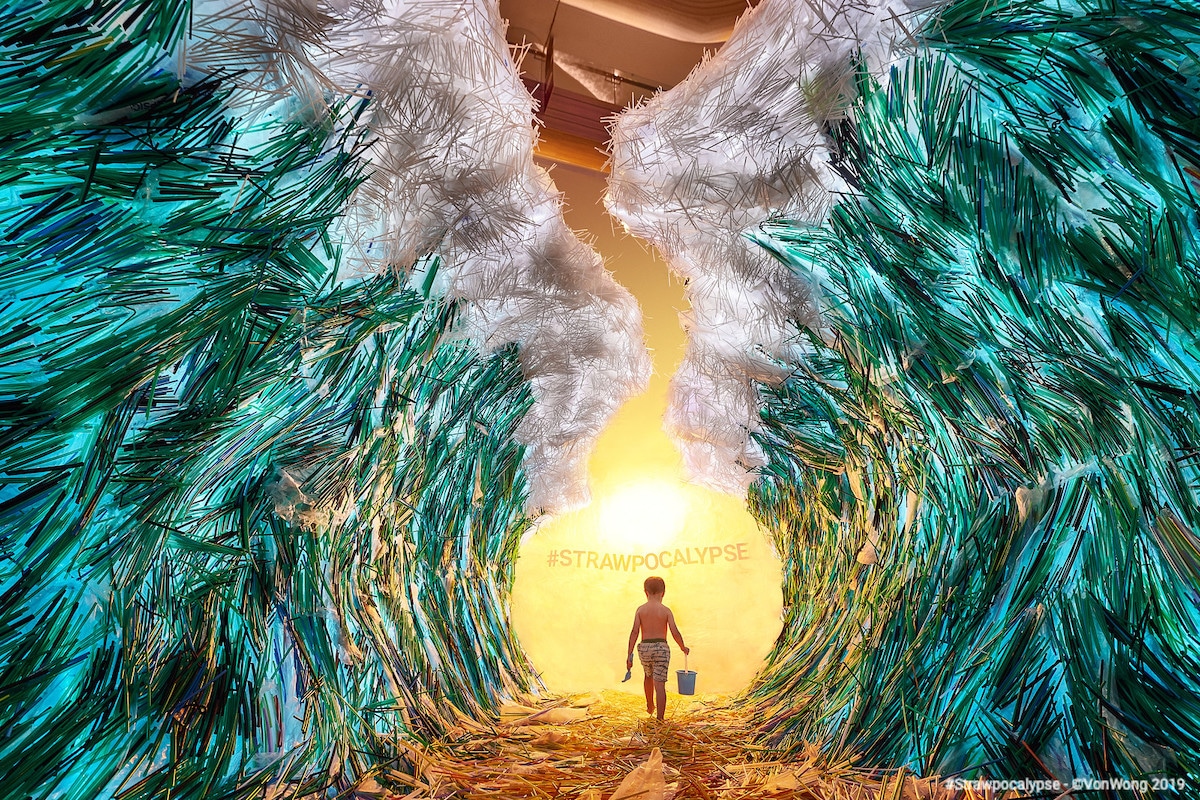 Learn more about how and why Von Wong built his Strawcopalypse.

Ready to stop using straws? Share
Like My Modern Met on Facebook
Get Our Weekly Newsletter
Become a
My Modern Met Member
As a member, you'll join us in our effort to support the arts.
Become a Member
Explore member benefits