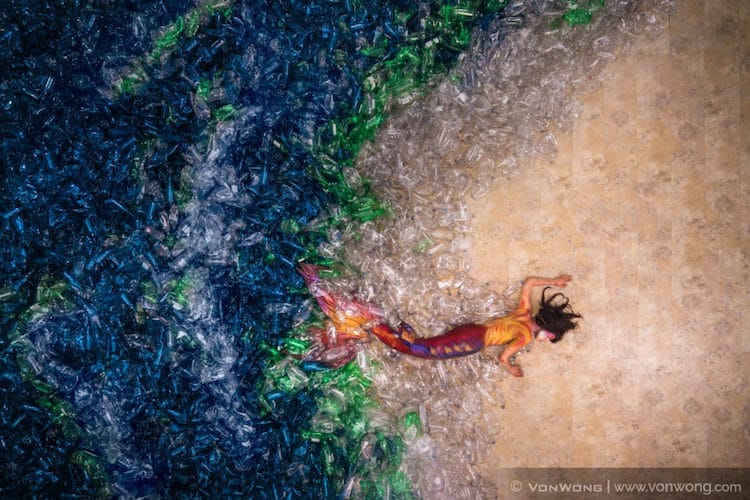 Earlier this year, the European Union voted for a sweeping ban on single-use plastic in an effort to reduce ocean plastic pollution. But it’s not just politicians that are doing their part to protect our planet—artists are working just as hard to raise awareness of environmental issues, evoke change, and document the beauty of the world before it’s too late.

The environmental art movement emerged in the 1960s and early 1970s and primarily celebrates the artist’s connection with nature. Pioneers of the movement such as Nils-Udo became famous for creating site-specific sculptures and installations from found natural materials, then documenting his works with photography. While earlier artists such as Udo celebrate the beauty of nature, many of today’s artists are using a wide range of media, techniques and styles to address social issues and the negative impact we as human beings are having on our planet.

Discover 6 of the most notable environmental artists of our time. 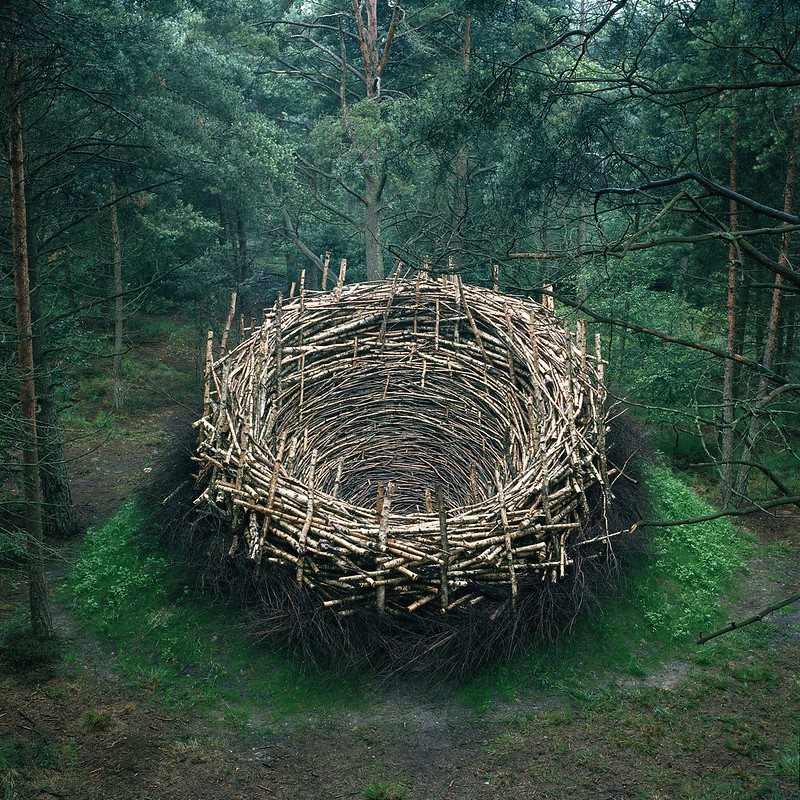 German artist Nils-Udo celebrates the beauty of nature by working with found materials—such as leaves and branches—to create stunning, site-specific works. He’s known for creating “utopias” that transform the land into mysterious, dreamlike realms. From delicately arranged petals scattered on the surface of a pond, to spectacular nests formed from twigs, leaves, and wildflowers, his works look as though they were created by busy woodland fairies or creatures of the forest.

His artist statement reads: “By installing plantings or by integrating them into more complex installations, the work is literally implanted into nature. As a part of nature, the work lives and passes away in the rhythm of the seasons.”

British sculptor, photographer, and environmentalist Andy Goldsworthy is known for his site-specific land art made from natural, found materials. He crafts his installations out of rocks, ice, leaves, or branches, then carefully documents how the ephemeral installations change and wither over time. “It’s not about art,” he explains. “It’s just about life and the need to understand that a lot of things in life do not last.”

A post shared by Richard Shilling (@richardshillingartist) on May 9, 2018 at 6:28am PDT

Inspired by the work of Goldsworthy, British artist Richard Shilling uses natural materials gathered from the environment to create outdoor sculptural installations. Exploring form and color, his most recognizable works include his stained glass-like sculptures made from colorful leaves, and his stacked rock totems. He tells My Modern Met, “Nature art is simply just one way of expressing the joy of feeling at one with the environment.” 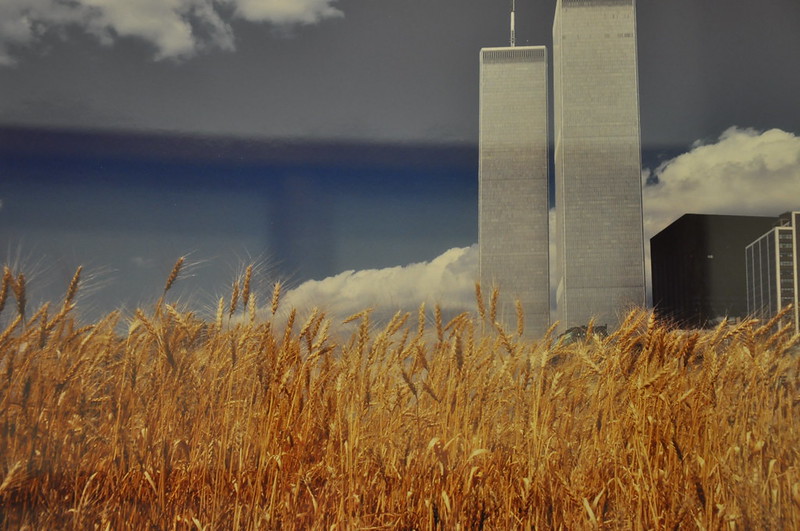 Hungarian conceptual artist Agnes Denes is often referred to as “the grandmother” of the early environmental art movement. She emerged during the 1960s and ‘70s and created many environment-inspired, site-specific pieces. Her most famous work, titled Wheatfield, a Confrontation, was created during a four-month period in the spring and summer of 1982. With the support of the Public Art Fund, Denes planted a field of golden wheat on two acres of landfill near Wall Street in lower Manhattan.

Now based in New York, Denes continues to work in a wide range of media. From poetry and writing to complex hand and computer-rendered diagrams, the artist explores the relationship between nature and the urban environment.

Denes’ upcoming show at The Shed gallery in 2019 will be her first solo exhibition at a major New York institution. 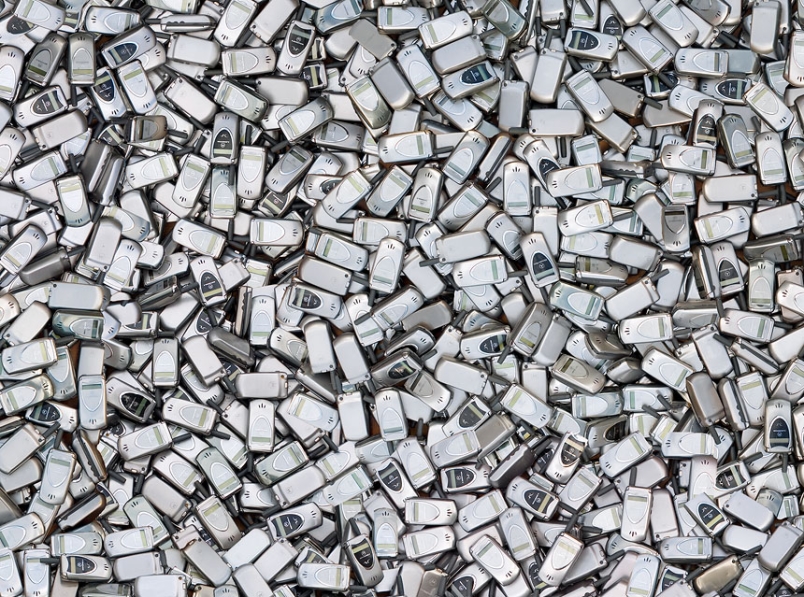 Seattle-based artist and photographer Chris Jordan exposes consumerist culture and uses shocking images of plastic waste to remind us about how we are destroying our planet. In his series titled Intolerable Beauty: Portraits of American Mass Consumption, he explored some of America’s shipping ports and industrial yards, where he captured colossal piles of discarded goods, such as cellphones and computer parts.

“I am appalled by these scenes, and yet also drawn into them with awe and fascination,” reveals the artist. “The immense scale of our consumption can appear desolate, macabre, oddly comical and ironic, and even darkly beautiful; for me its consistent feature is a staggering complexity.”

In his recent short film, ALBATROSS, Jordan reveals the gut-wrenching environmental tragedy of tens of thousands of albatross chicks. On a remote island in the heart of the great Pacific, Chris and his filming team witnessed cycles of birth, life, and finally death caused by plastic pollution. The shocking footage shows the birds lying dead on the ground with their bodies filled with plastic.

Photographer Benjamin Von Wong creates beautiful, thought-provoking images that create awareness of issues such as climate change and plastic pollution in our oceans. His high-concept projects involve innovative use of materials, which is especially true in one of his latest projects that focuses on e-waste. By partnering with Dell and Wistron Greentech, Wong acquired the estimated amount of electronic waste created by an average citizen of the United States in one lifetime and turned it into stunning, post-apocalyptic imagery.

Learn more about the project below.