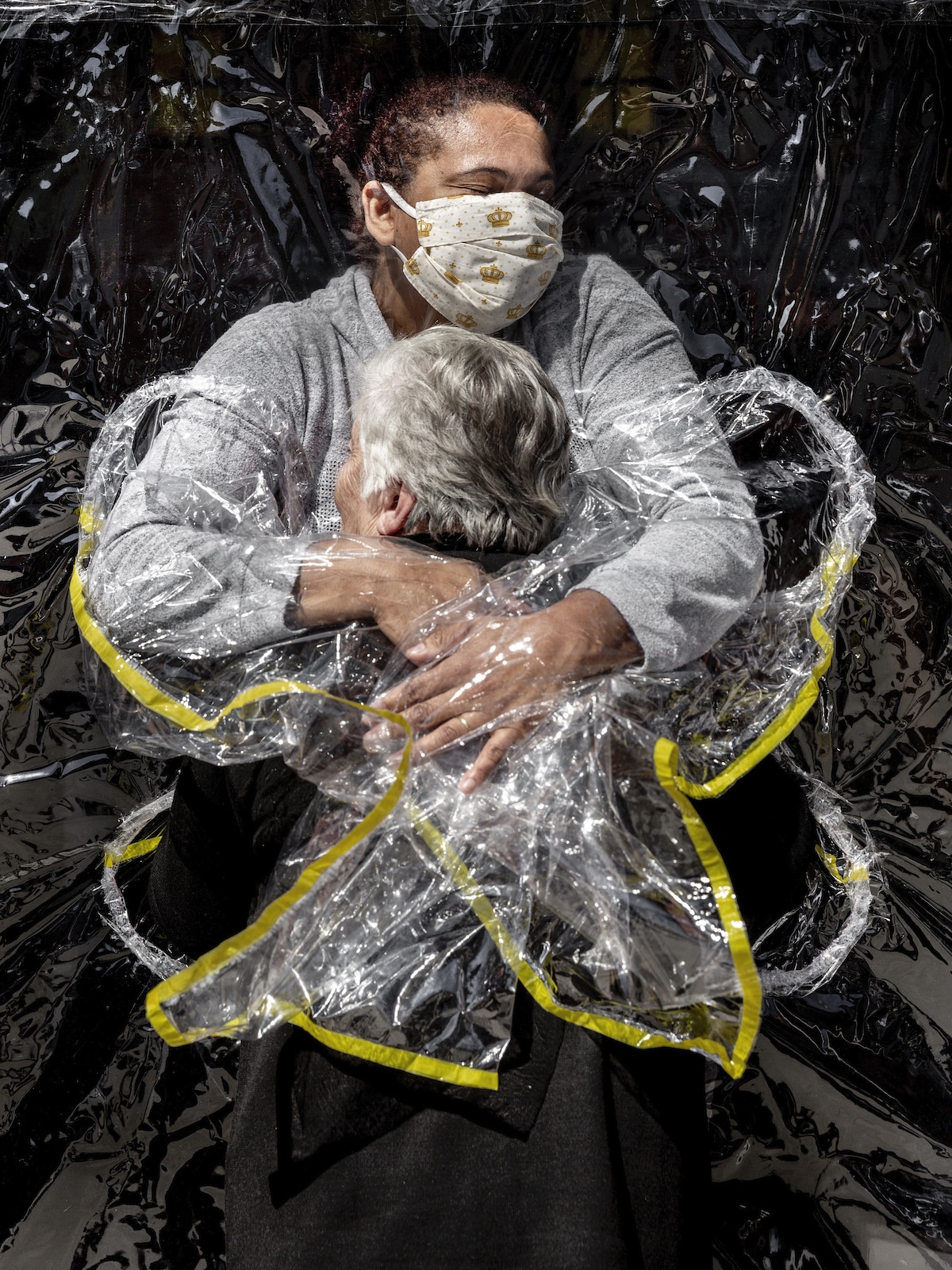 “The First Embrace” © Mads Nissen (Denmark). Politiken/Panos Pictures. World Press Photo of the Year.
“Rosa Luzia Lunardi (85) is embraced by nurse Adriana Silva da Costa Souza, at Viva Bem care home, São Paulo, Brazil, on 5 August. This was the first hug Rosa had received in five months. In March, care homes across the country had closed their doors to all visitors as a result of the COVID-19 pandemic, preventing millions of Brazilians from visiting their elderly relatives. Carers were ordered to keep physical contact with the vulnerable to an absolute minimum. At Viva Bem, a simple invention, ‘The Hug Curtain', allowed people to hug each other once again.”

For lovers of photojournalism, the wait is over. The annual World Press Photo Contest has just released the winners of the 2021 competition. As the world's foremost awards for international photojournalism, the contest attracts the highest quality of work. Danish photojournalist Mads Nissen saw his work awarded the top prize, as his moving photo of a COVID-19-friendly embrace in Brazil won World Press Photo of the Year. Italian photographer Antonio Faccilongo won World Photo Story of the Year for his work around the Israeli-Palestinian conflict and the toll that it takes on the lives of ordinary people.

Nissen's photograph shows an 85-year-old woman in Brazil using what is known as a “Hug Curtain” to be allowed physical contact with a caregiver from her nursing time. “This iconic image of COVID-19 memorializes the most extraordinary moment of our lives, everywhere,” shared Kevin WY Lee, photographer, creative director, and 2021 Photo Contest jury member. “I read vulnerability, loved ones, loss, and separation, demise, but, importantly, also survival—all rolled into one graphic image. If you look at the image long enough, you’ll see wings: a symbol of flight and hope.”

Across a wide variety of categories, from spot news to sports to nature, photographers were awarded for either a single shot or a photo story. The winning images weave a story of life over the last year, with omnipresent face masks making an appearance in many images. The Beirut port explosion and Brazil wildfires are just some of the big news stories that had winning visuals. But beyond these stories, photojournalists covered others that deserve a wider audience. The fight for transgender rights in Russia, the food crisis in Yemen, and the conflict between Azerbaijan and Armenia are some of the topics that were deservedly highlighted.

In a field unfortunately dominated by men, two female photojournalists were awarded top prizes for their work. Ami Vitale took home first place in the nature category for her single image of an endangered giraffe being transported to safety. These Rothschild’s giraffes in western Kenya needed to be moved due to flooding that effectively kept them on an island. American photojournalist Evelyn Hockstein won the spot news prize for her single image of a man and woman engaged in conflict over the removal of the Emancipation Memorial in Washington, D.C.

With so many visuals available to the public at all times, the World Press Photo Contest is a way to remind us of just how important professional photojournalists are—not only for the quality of their photography but also for their bravery in going to great lengths to share news with the world.

Scroll down for more category winners of the 2021 World Press Photo Contest. 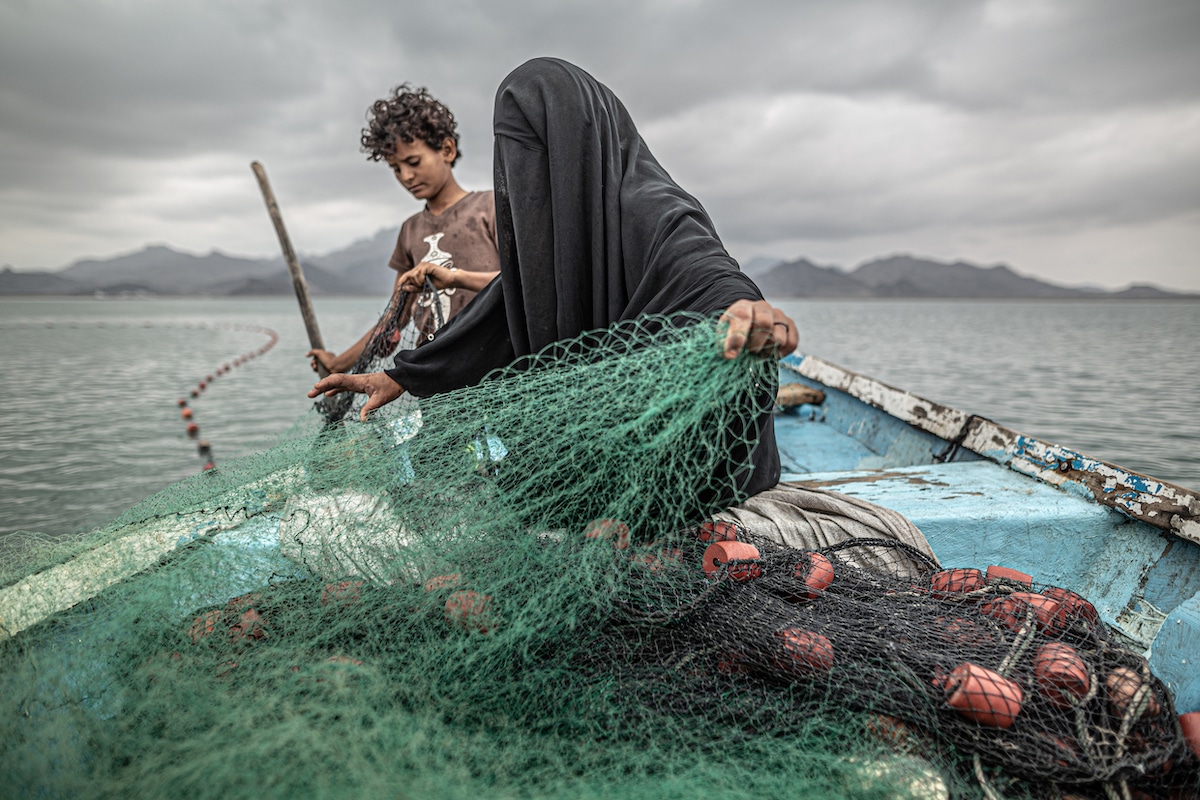 “Yemen: Hunger, Another War Wound” © Pablo Tosco (Argentina). Contemporary Issues, First Prize, Singles.
“Fatima has nine children. In order to provide for them, she makes a living off fishing. Although her village was devastated by armed conflict in Yemen, Fatima returned to resume her livelihood, buying a boat with money she earned from selling fish. The conflict—between Houthi Shia Muslim rebels and a Sunni Arab coalition led by Saudi Arabia—dates from 2014, and has led to what UNICEF has termed the world’s largest humanitarian crisis.” 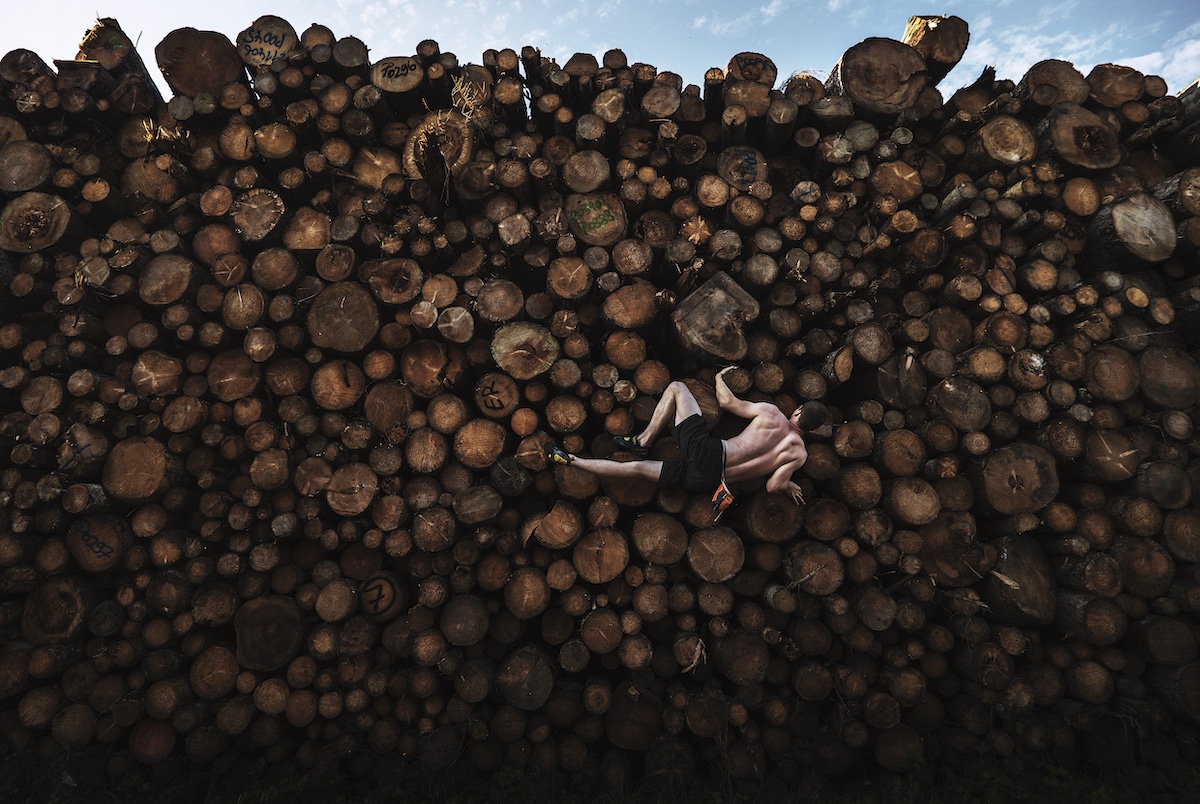 “Log Pile Bouldering” © Adam Pretty (Australia). Getty Images. Sports, First Prize, Singles.
“Bouldering entails climbing on small rock formations and boulders of usually no more than six meters in height, without ropes or harnesses. Historically, it began as a training activity for more ambitious climbing and mountaineering pursuits, but has evolved into a sport in its own right. Rock-climbing gyms and sports facilities in Munich were closed as a result of the ongoing COVID-19 pandemic, so athletes had become creative in their training methods.” 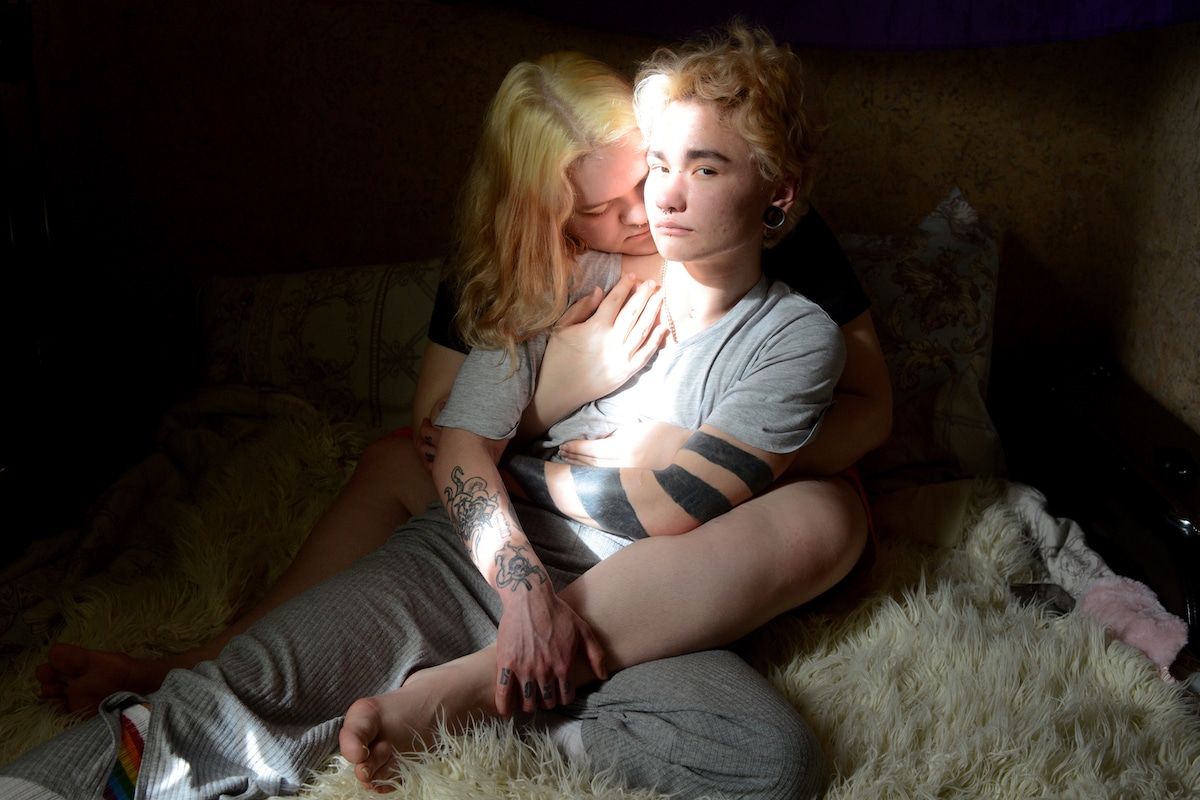 “The Transition: Ignat” © Oleg Ponomarev (Russia). Portraits, First Prize, Singles.
“Ignat, a transgender man, sits with his girlfriend Maria in Saint Petersburg, Russia, on 23 April 2020.. Ignat was bullied throughout his school years, and confronted by the school psychologist following rumors that he spoke about himself using the masculine gender. Ignat opened up to the psychologist about his gender identity—the first stranger to whom he had told everything—but asked to keep it a secret. The whole school found out, and the insults and humiliations became permanent. Many LGBTQ+ people in Russia keep low profiles because of stigmatization against nontraditional sexuality.” 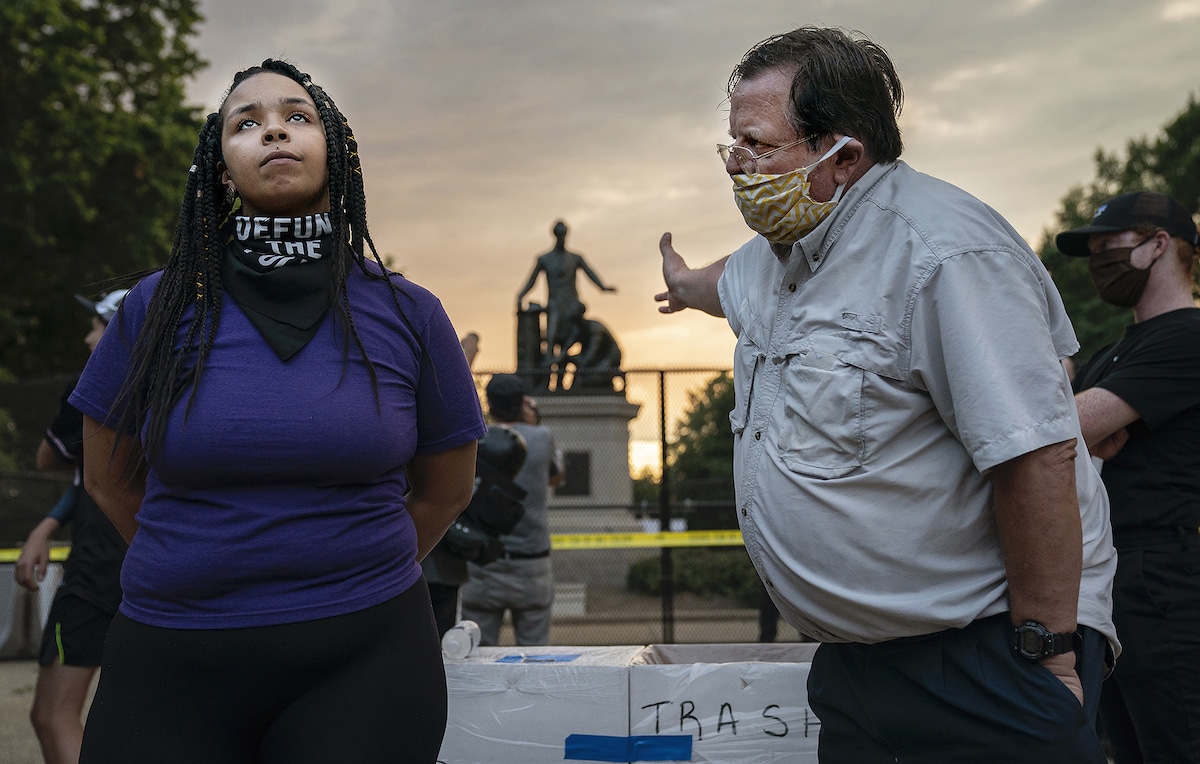 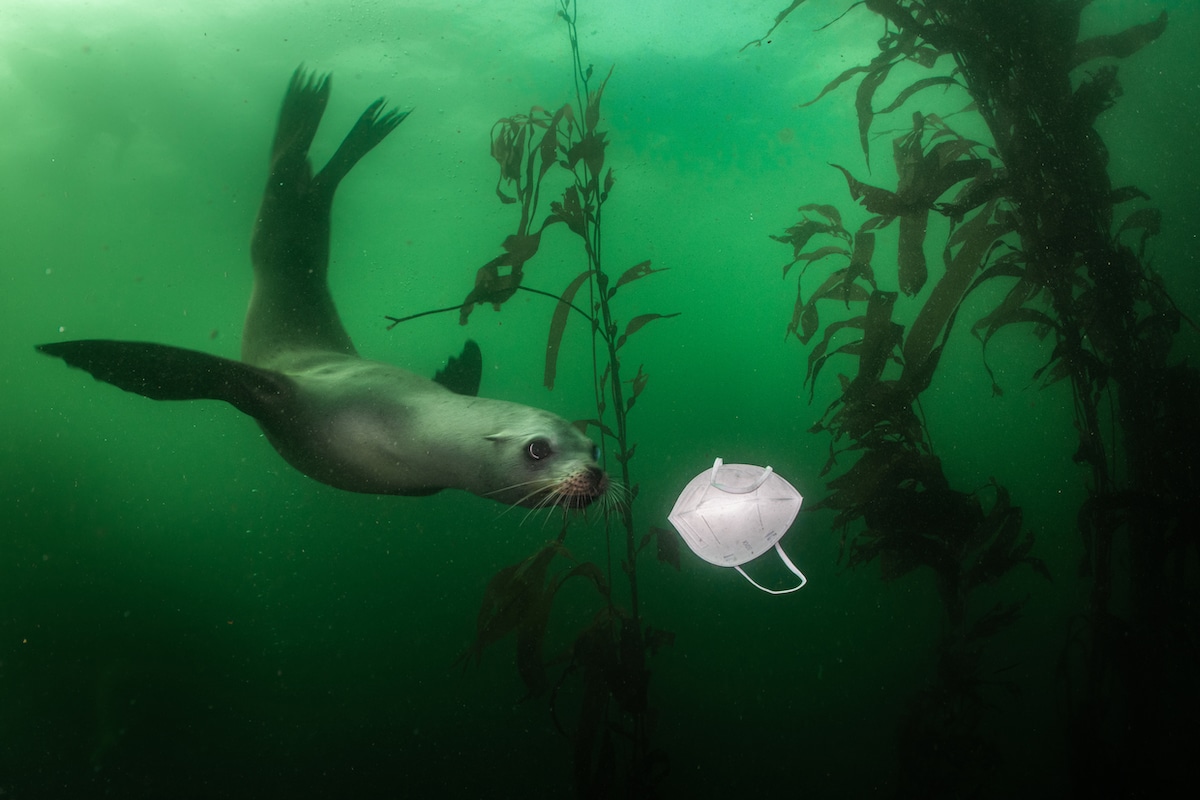 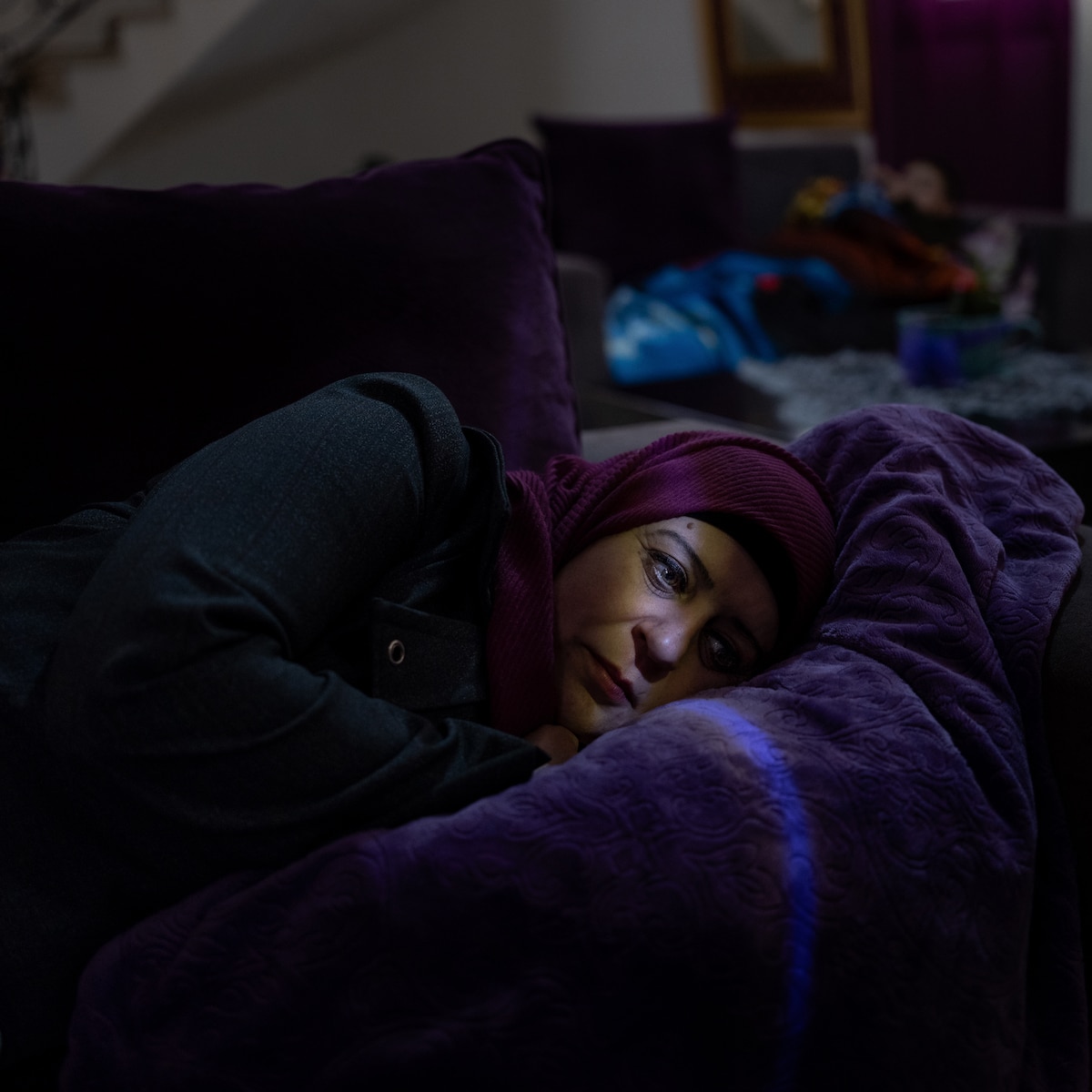 “Habibi” © Antonio Faccilongo (Italy). Getty Reportage. Long-term Projects, First Place.
“Nearly 4,200 Palestinian security detainees are being held in Israeli prisons, according to a February 2021 report by human rights organization B’Tselem. Some face sentences of 20 years or more. To visit a Palestinian prisoner in an Israeli jail, visitors have to overcome a number of different limitations resulting from border laws, prison regulations, and restrictions set by the Israel Security Agency (ISA). Visitors are usually allowed to see prisoners only through a transparent partition, and talk to them via a telephone receiver. Lydia Rimawi lies on her sofa in Beit Rima, near Ramallah, Palestine, on 20 December 2018. Her husband Abdul Karim Rimawi was arrested in 2001 and sentenced to 25 years in prison for involvement in the assassination of Israeli tourism minister Rehavam Ze’evi. The couple have a son, Majd, who was born as a result of IVF in 2013. In 2014, Abdul Karim was fined around US$1,500 for smuggling his semen from prison, and deprived of family visits for two months.” 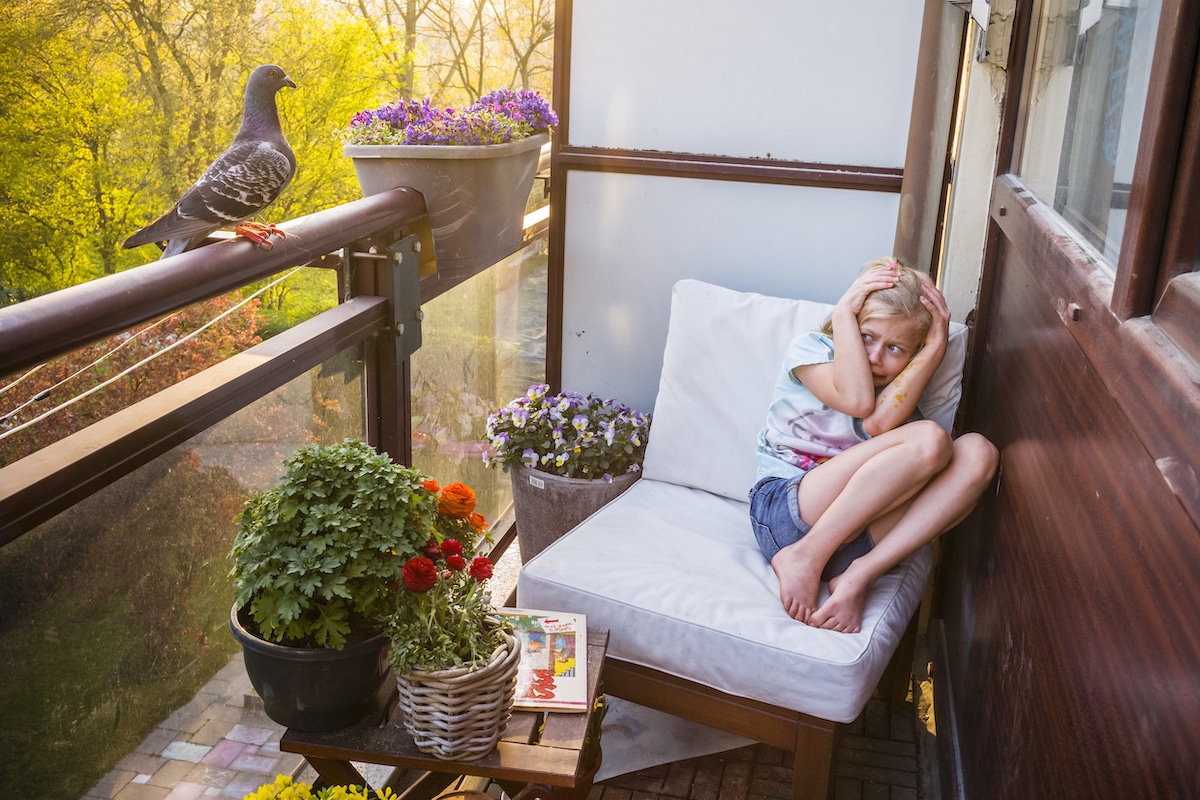 “Pandemic Pigeons—A Love Story” © Jasper Doest (The Netherlands). Nature, First Prize, Stories.
“The photographer’s daughter Merel cowers after Dollie flies past and perches on the balcony, before entering the house, in Vlaardingen, the Netherlands, on 6 April 2020. A pair of feral pigeons befriended the photographer’s family, who were isolated in their apartment in Vlaardingen, the Netherlands, during the COVID-19 pandemic. Ollie and Dollie, as the family named them, were regulars in the house, their daily visits a reminder that humans are not alone on this planet, even while living isolated in urban areas.” 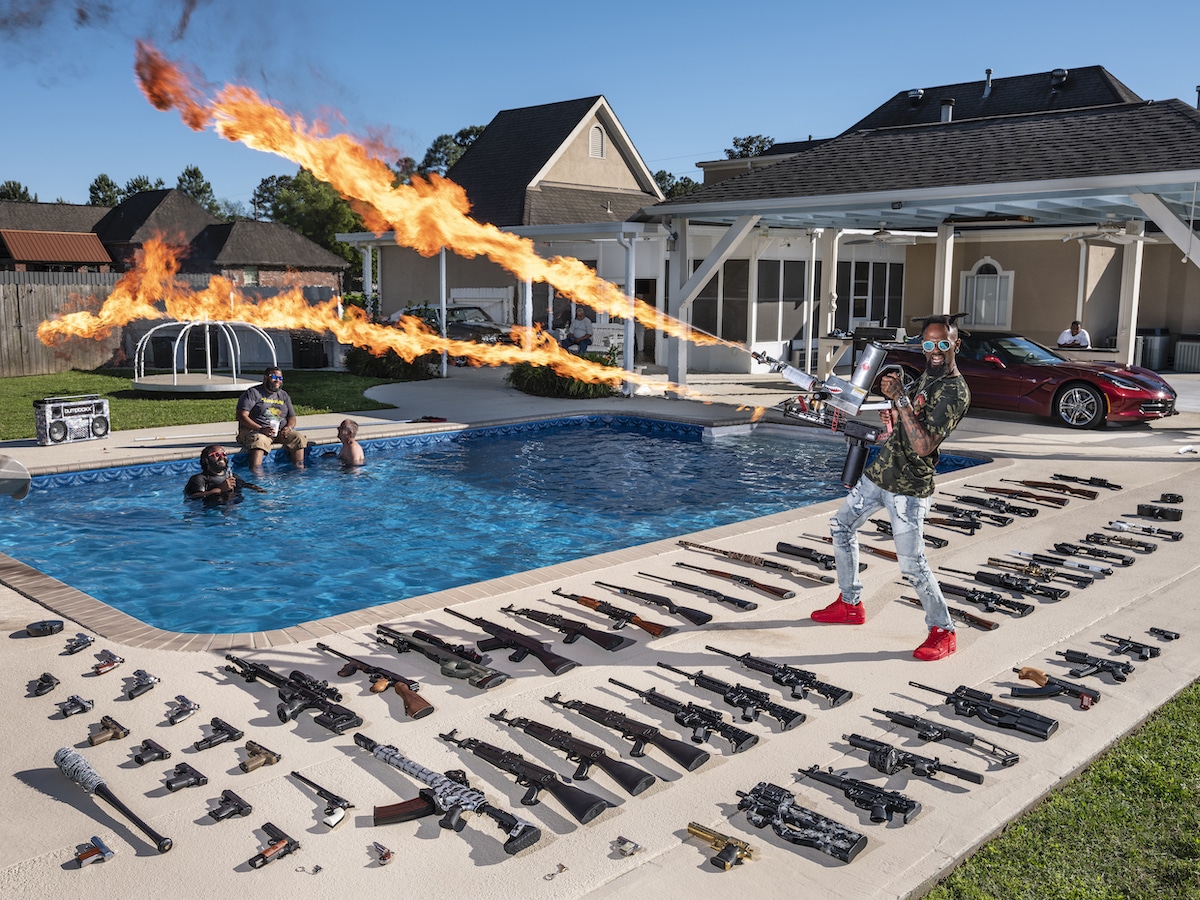 “The ‘Ameriguns’” © Gabriele Galimberti (Italy). National Geographic. Portraits, First Prize, Stories.
“According to the Small Arms Survey– an independent global research project based in Geneva, Switzerland–half of all the firearms owned by private citizens in the world, for non-military purposes, are in the USA. Torrell Jasper (35) poses with his firearms in the backyard of his house in Schriever, Louisiana, USA, on 14 April 2019. A former US Marine, he learned to shoot from his father as a child.” 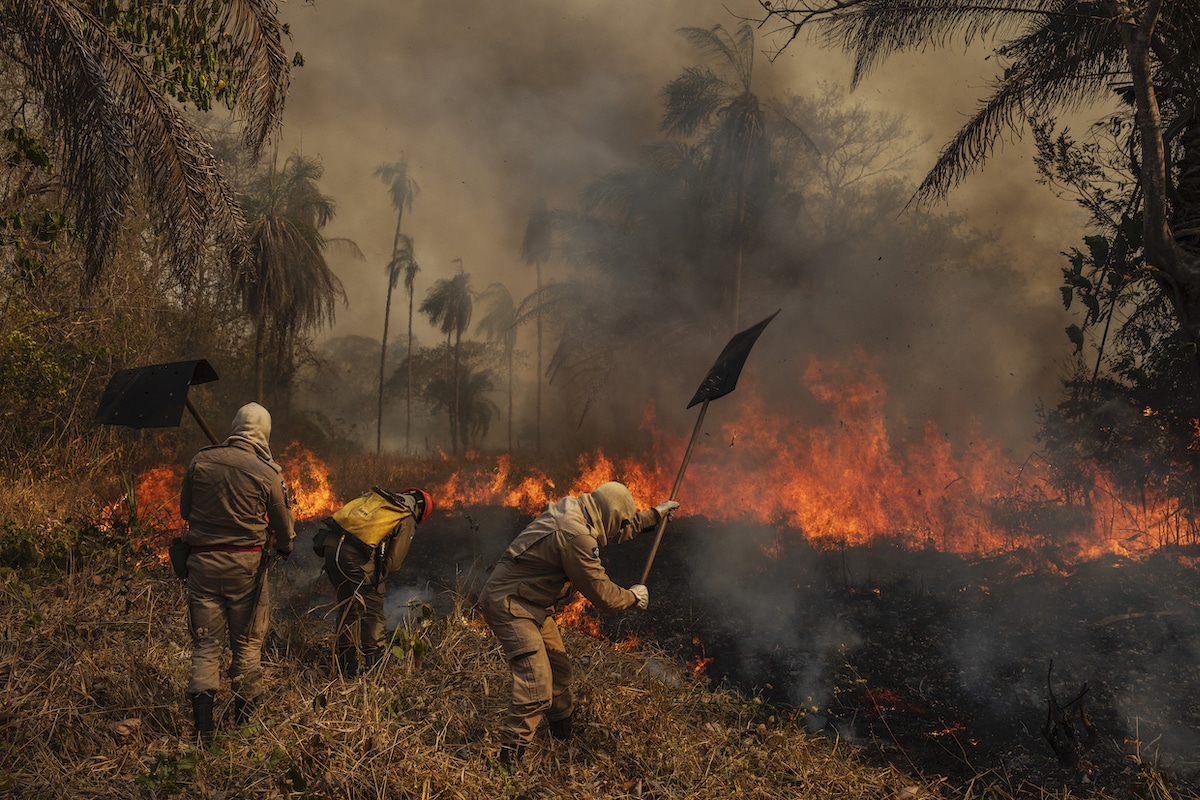 “Pantanal Ablaze” © Lalo de Almeida (Brazil). Panos Pictures for Folha de São Paulo. Environment, First Place, Stories.
“Nearly a third of Brazil’s Pantanal region—the world’s largest tropical wetland and flooded grasslands, sprawling across some 140,000 to 160,000 square kilometers—was consumed by fires over the course of 2020. Firefighters combat a fire outbreak at the São Francisco de Perigara farm, which is home to one of the largest populations of Hyacinth macaws (Anodorhynchus hyacinthinus) in Brazil, on 14 August 2020. About 92 percent of the farm area, mostly dedicated to preservation, was destroyed by the fire.” 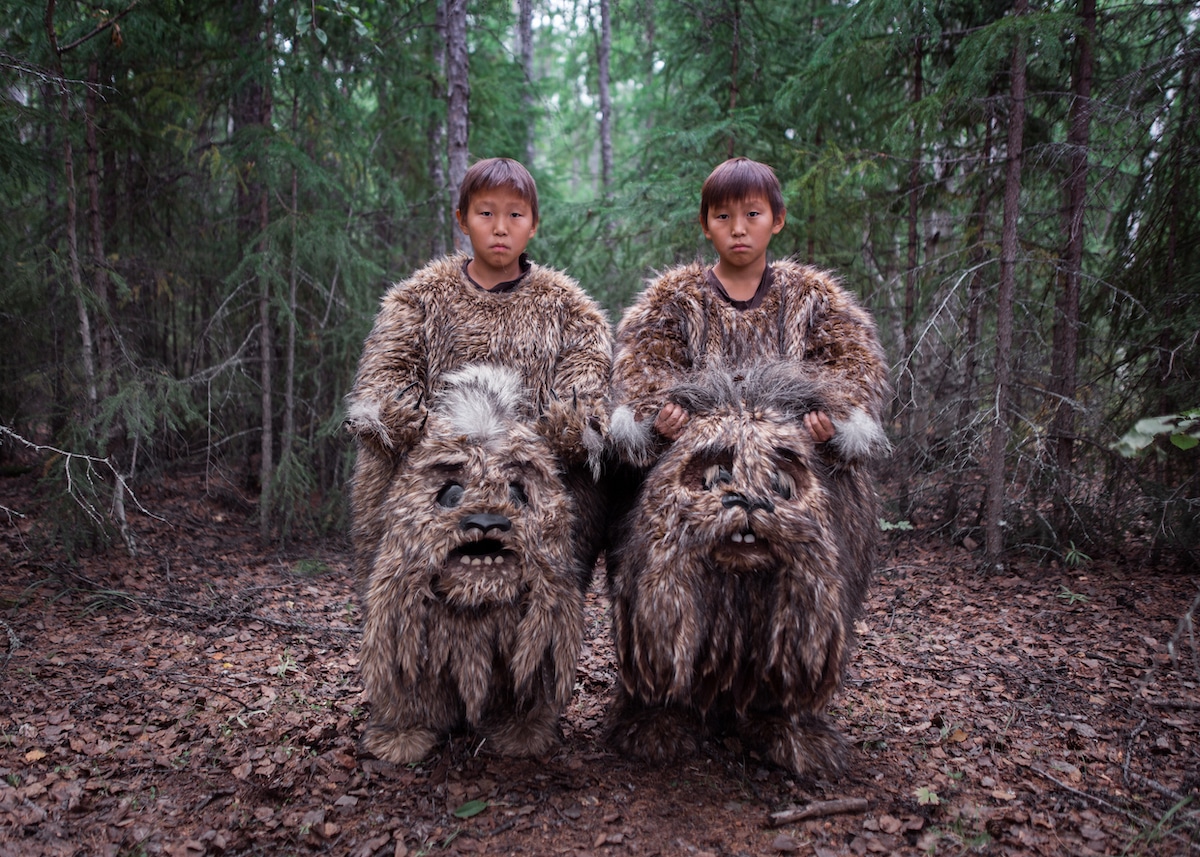 “Sakhawood” © Alexey Vasilyev (Russia). Contemporary Issues, First Prize, Stories.
“The people of Sakha, a republic in the far northeast of the Russian Federation, live in a remote area with extreme weather conditions: temperatures can drop as low as -50°C in winter. Although Sakha, which is also known as Yakutia, extends over more than three million square kilometers, its population numbers barely 950,000 people, around 50 percent of which are ethnic Sakha (or Yakuts). Art has become a way of showcasing and preserving Sakha culture, traditions, and stories. Cinema has flourished there since the 1990s. Around seven to ten feature films are shot a year, by a local movie industry lightheartedly dubbed ‘Sakhawood’. “ 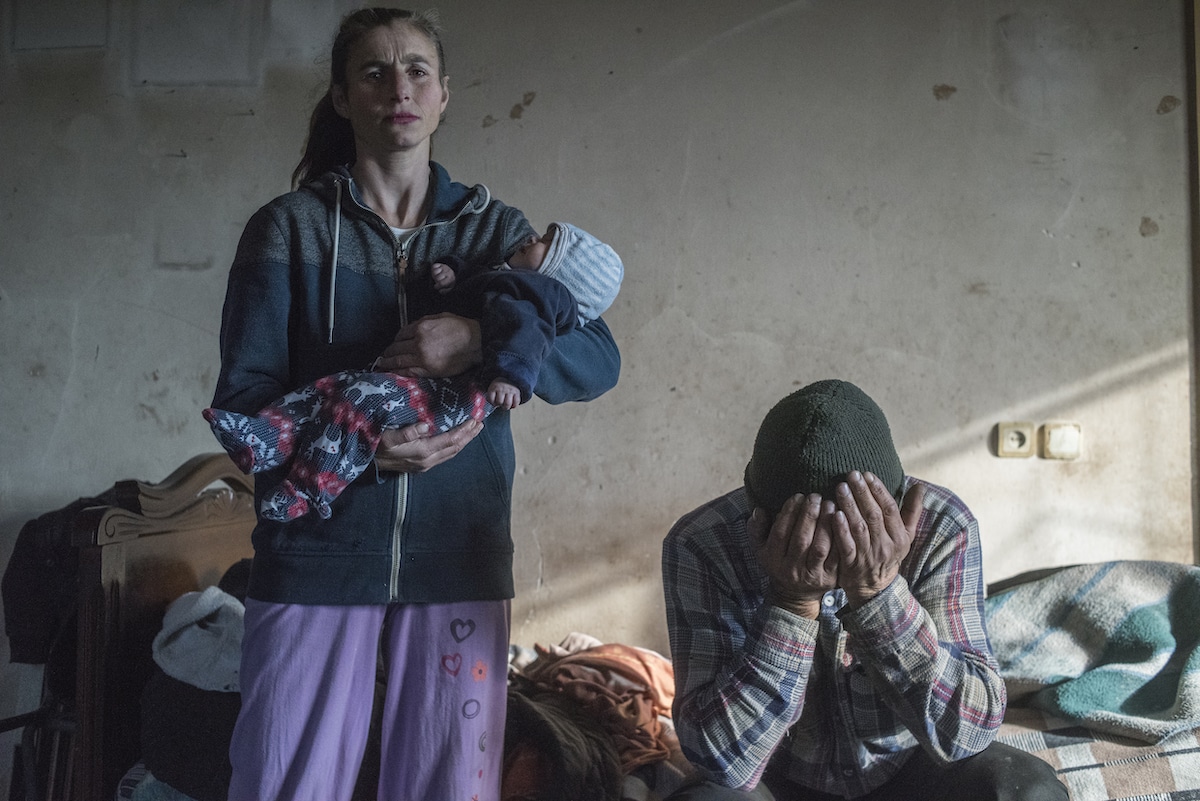 “Paradise Lost” © Valery Melnikov (Russia). Sputnik. General News, First Place, Stories.
“Conflict between Azerbaijan and Armenia over the disputed region of Nagorno-Karabakh resumed in September, after a lull of 30 years. Azat Gevorkyan and his wife Anaik are pictured before leaving their home on 28 November 2020 in Lachin, Nagorno-Karabakh, the final district to be returned to Azerbaijani control following the Second Nagorno-Karabakh War.” 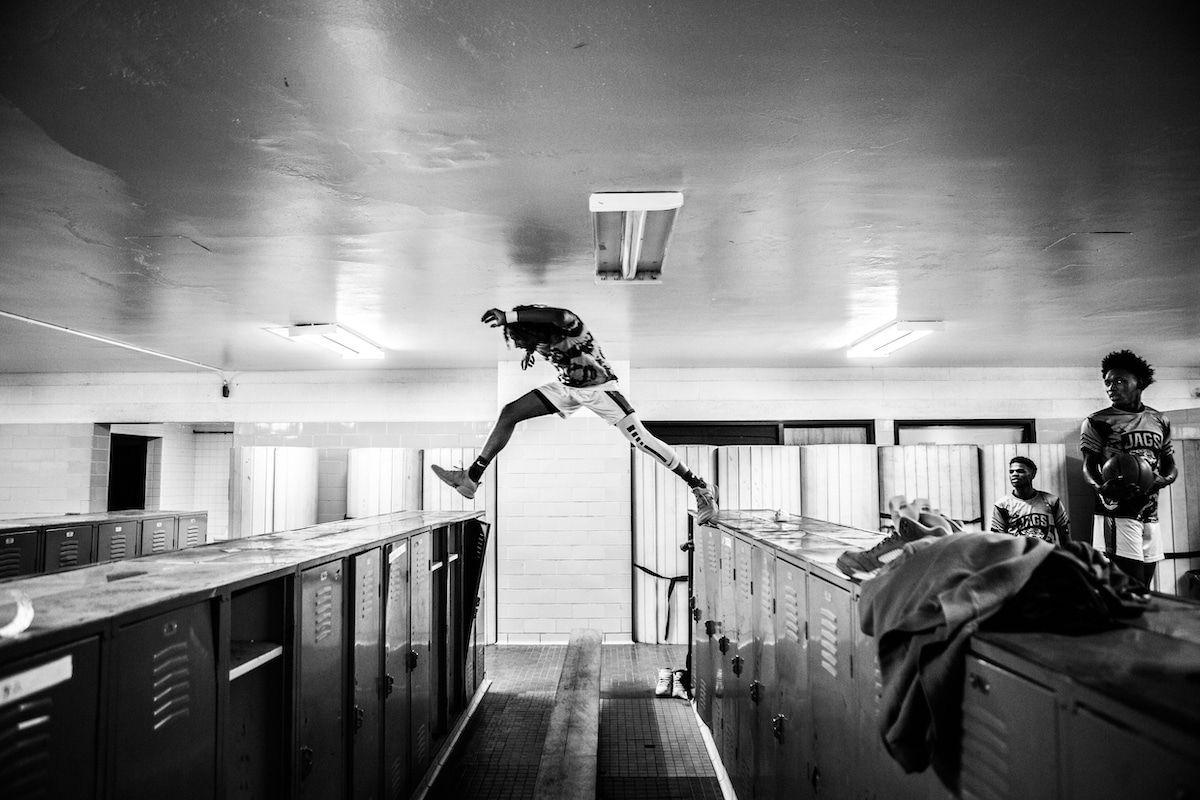 “Those Who Stay Will Be Champions” © Chris Donovan (Canada). Sports, First Prize, Stories.
“Flint Jaguars team star Taevion Rushing jumps from one locker to another in the team locker room before the last regular season game of his high school basketball career, on 24 February 2020. He aims to go on to play basketball at a junior college. The Flint Jaguars basketball team in Flint, Michigan, USA, embodies efforts to nurture stability, encourage mutual support and strengthen community spirit in a city struggling to survive. Flint, the birthplace of General Motors, is striving against outmigration caused by a precipitous decline in its motor industry, a health crisis brought about by the authorities switching water-supply sources without proper safeguards, and the systemic neglect of high-poverty, predominantly Black neighborhoods.” 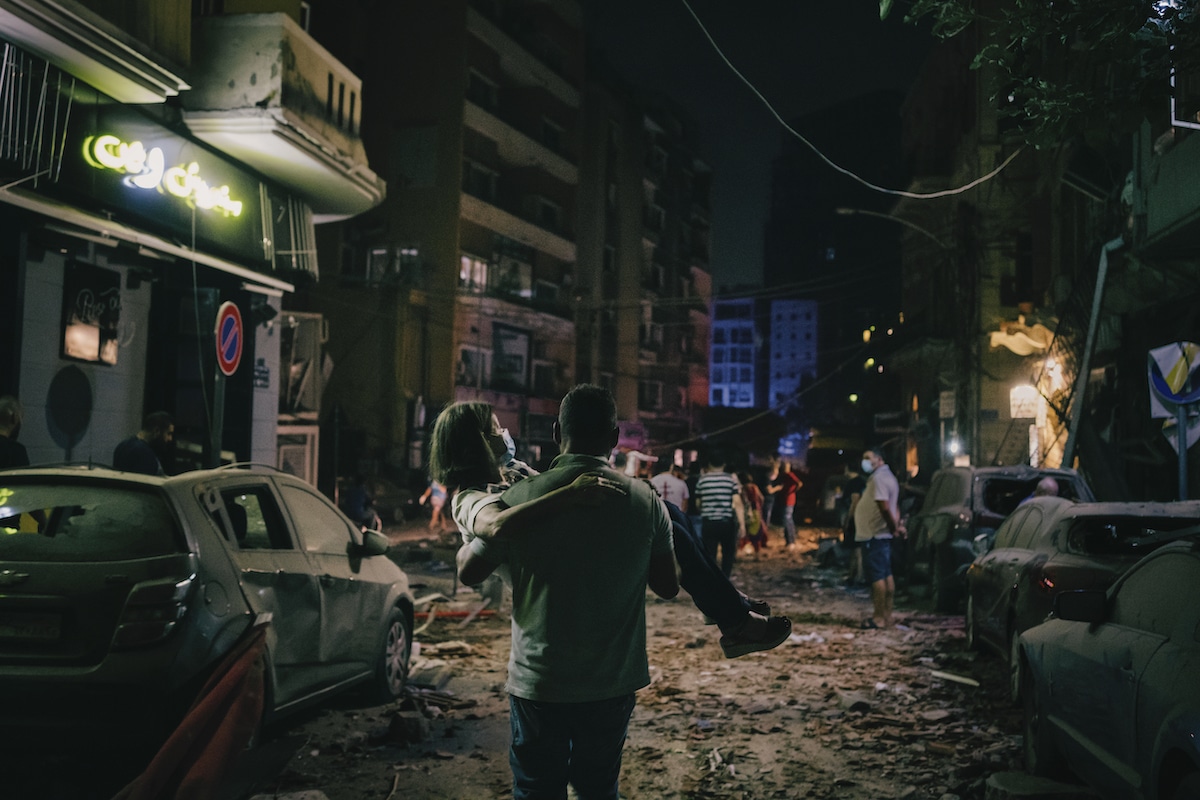 “Port Explosion in Beirut” © Lorenzo Tugnoli (Italy). Contrasto. Spot News, First Prize, Stories.
“At around 6pm on 4 August, a massive explosion, caused by more than 2,750 tons of high density ammonium nitrate, shook Lebanon’s capital Beirut. The explosive compound was being stored in a warehouse in the port. Some 100,000 people lived within a kilometer of the warehouse. The explosion, which measured 3.3 on the Richter scale, damaged or destroyed around 6,000 buildings, killed at least 190 people, injured a further 6,000, and displaced as many as 300,000.” 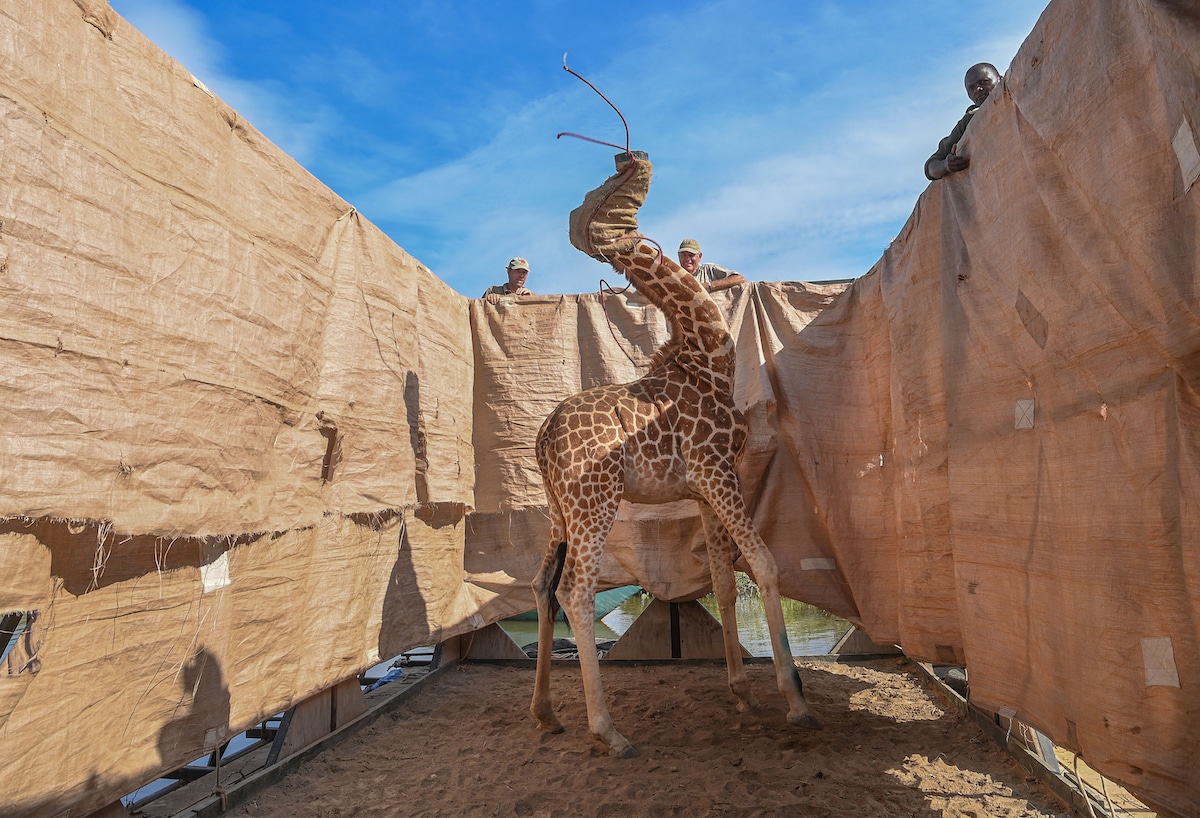 “Rescue of Giraffes from Flooding Island” © Ami Vitale (United States). CNN. Nature, First Prize, Singles.
“A Rothschild’s giraffe (Giraffa camelopardalis rothschildi) is transported to safety in a custom-built barge from a flooded Longicharo Island, Lake Baringo, in western Kenya, on 3 December 2020. Rothschild’s giraffes are a subspecies of the northern giraffe, and are classified as endangered. The giraffe is the world’s tallest land mammal and the Rothschild’s giraffe is one of the loftiest subspecies, growing up to six meters in height.”

Moved by the talent of these photojournalists? Share
Like My Modern Met on Facebook
Get Our Weekly Newsletter
Become a
My Modern Met Member
As a member, you'll join us in our effort to support the arts.
Become a Member
Explore member benefits