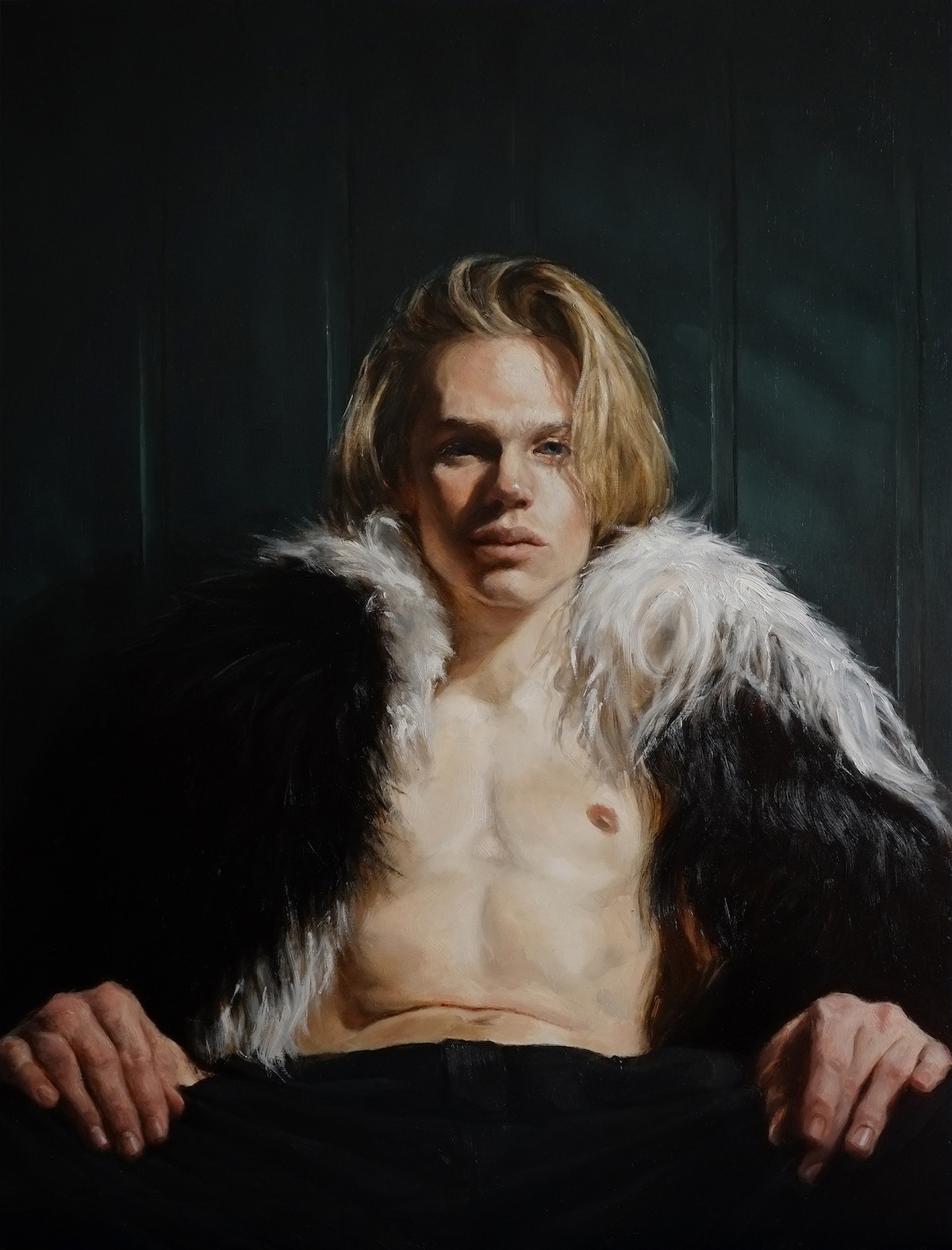 ‘The Queen is Dead'

Canadian-born, Barcelona-based figurative painter Alessandro Tomassetti explores different sides of masculinity with his oil paintings. Through his use of classical technique, he undermines the standard trope of the male portrait via his sensual, intimate depictions of his models. Not shown as kings of industry, each sitter reveals a vulnerability captured by Tomassetti's powerful brush strokes.

The realist painter, who finds most of his models on Instagram, came into his own as an artist late in life, after a successful career in digital effects. Digging back into his childhood roots and a love for Old Master paintings, he gravitated toward oil painting, and is using the medium to subvert expectations. In an age where gender norms are constantly being challenged, he brings portraiture to the level of everyman, moving his models from instant selfies to immortalization in paint.

By subverting our historic expectations—where men were typically viewers of these portraits rather than subjects—Tomassetti also asks us to think about male and female roles in the history of art. We had to chance to speak with Tomassetti about his journey as an artist and what inspires his work. Read on for our exclusive interview. 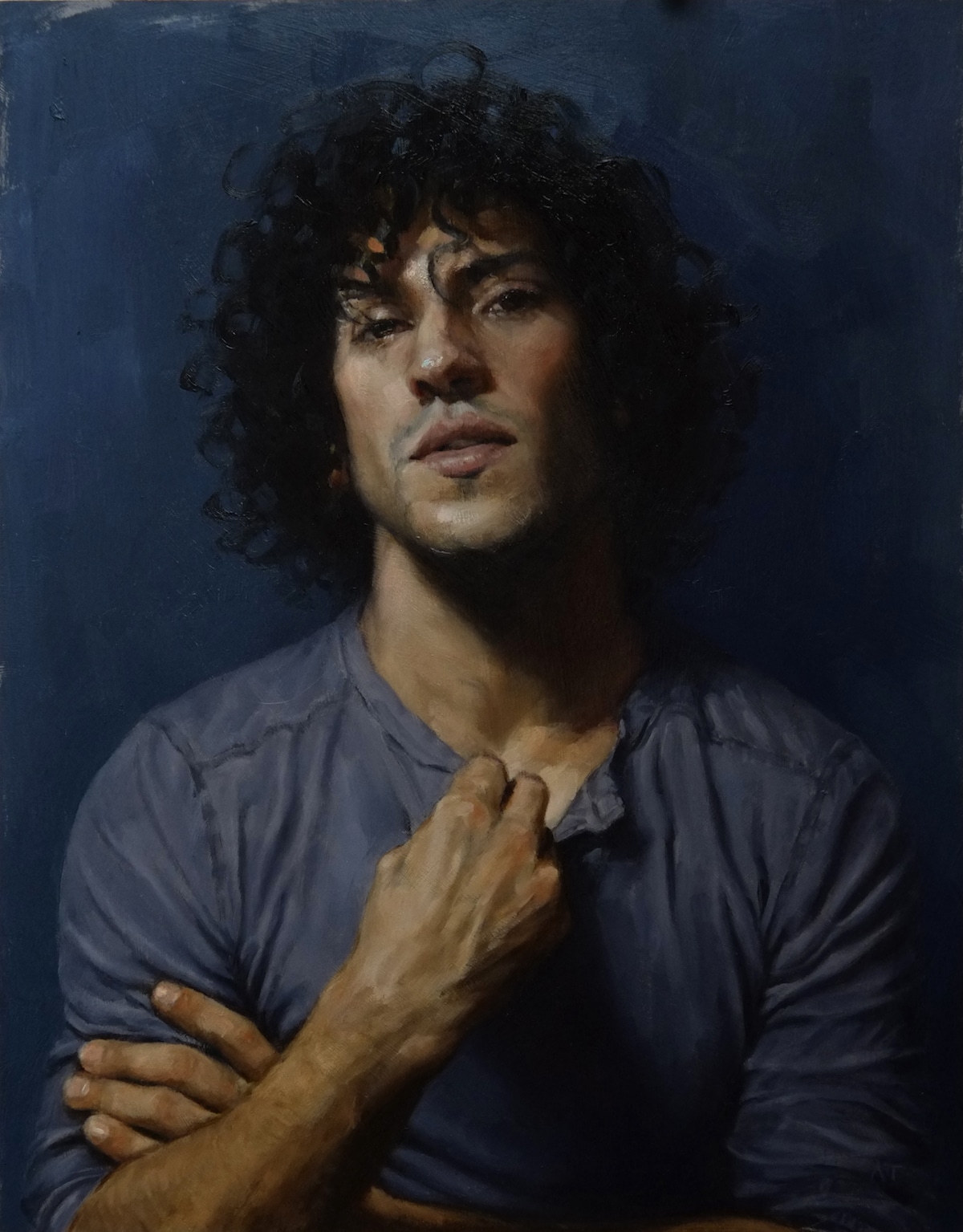 What was your journey like to become a painter?

I was born in Canada to Italian immigrants and, like most kids in that situation, I grew up in somewhat of a limbo between two worlds—my not very kid-friendly night light was a large, gold, spiky replica of St Peter’s Basilica that had various Popes peeking through lit-up windows. The two things that probably influenced me the most to become an artist were the summers I spent with family in Rome where I was introduced to the Masters of the Renaissance and Baroque, and the fact that my dad sold office equipment for a living so there was never a shortage of paper in our house. Drawing was my favorite pastime.

I studied Fine Art and Art History at university and it was a solid program, but I can’t say we were ever properly taught to paint; so, I never considered it as a career path. Instead, I fretted about what to do after school that wouldn’t see me starve. One day I accompanied a friend to her interview for a computer animation post-grad program and, as these stories usually go, I was accepted instead of her. Upon graduating, I moved to Los Angeles where I did digital special effects for Disney and Sony.

After more than a decade in the US, my work visas had run out and I was unable to get a green card so my partner and I decided to travel around the world for a year in search of a new home base. We settled on Barcelona, where I found myself with no job, no friends and lots of time on my hands so I signed up for a workshop with Spanish painter Eloy Morales. Despite his generous instruction, my first day with oils was a disaster because I didn’t understand how the paint worked. After thinking about it all night, I went in the next morning and realized that I could trust my instincts for the materials and I just jumped in. That was 4 years ago and I have been dedicated to and humbled by painting since. 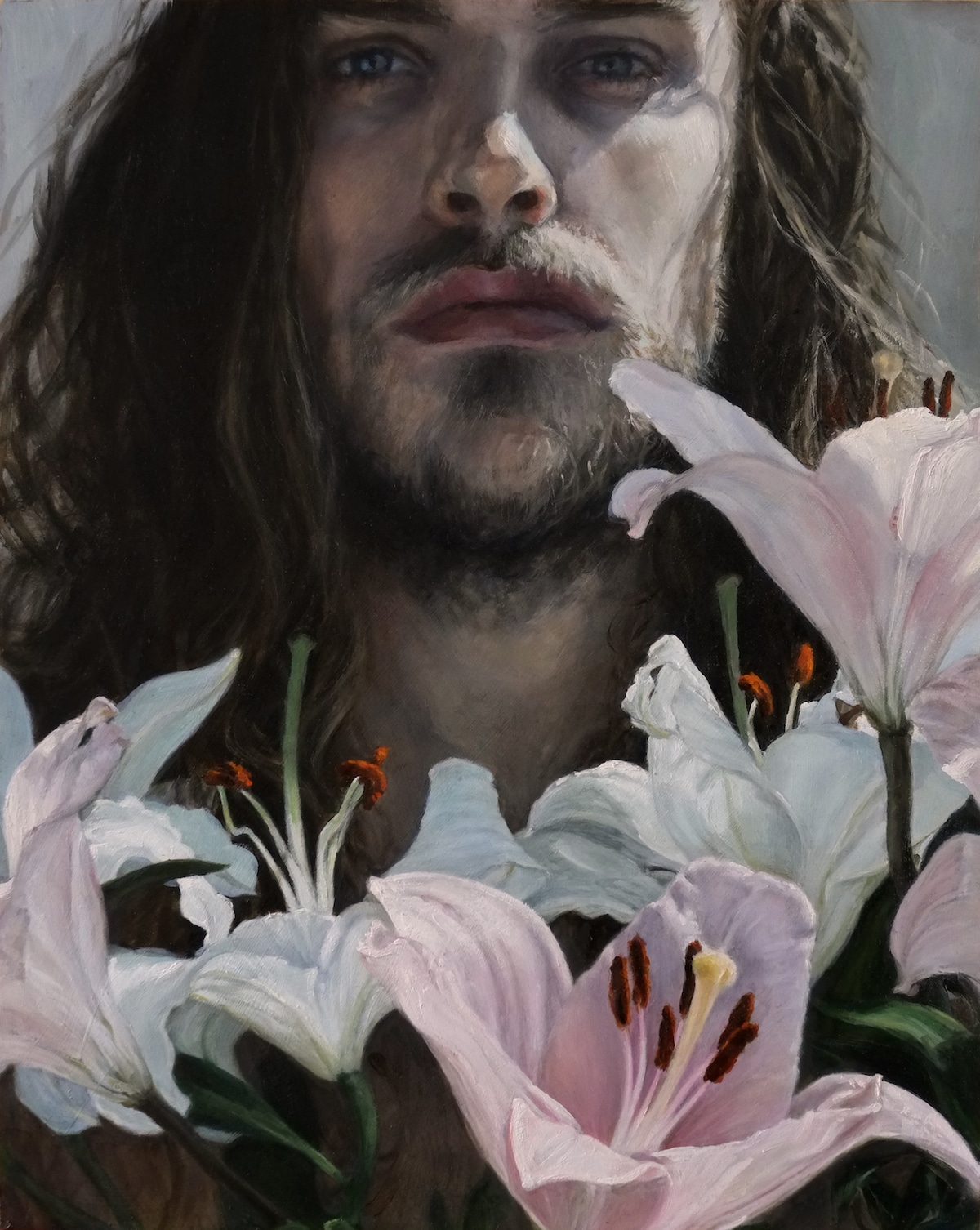 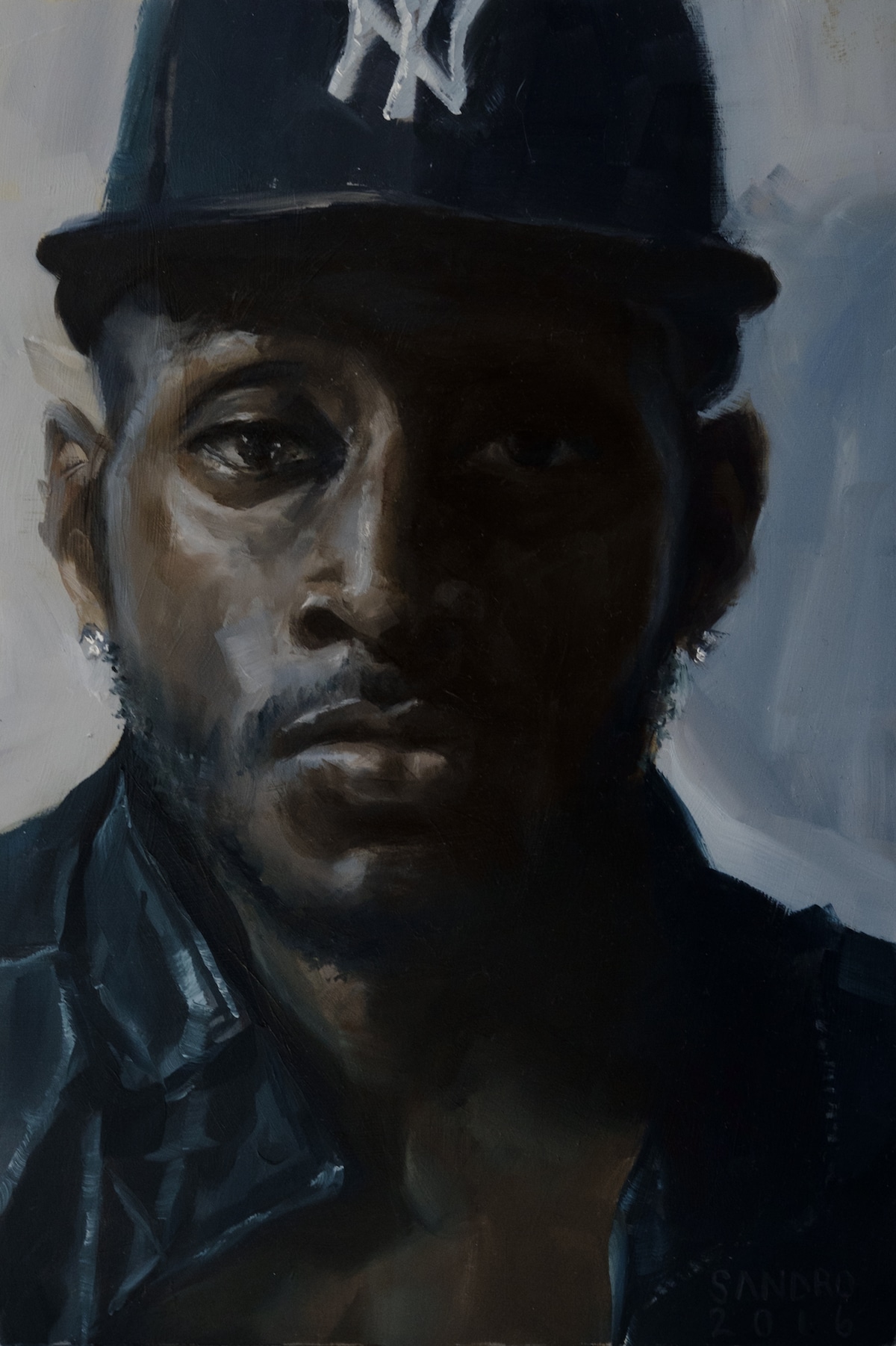 In art history, from Greek statuary through the Renaissance, the male form has been appreciated. But, male figurative painting seems to have less of a place in contemporary art. Why do you think that is?

It’s an interesting question and one that I don’t know an easy answer for. Certainly, for the bulk of art history as we know it, men controlled who was allowed to make art and, to a great degree, what that art was about. This system went on until the 19th century more or less uninterrupted, so the male subject was in vogue because there was a demand for it.

My guess would be it fell out of fashion, along with the genteel aristocrat, in favor of the hard-working everyman who probably didn’t see getting his portrait painted as a priority. Of course, there are exceptions (Sargent, Picasso, Hockney all famously painted men) and you see more and more work with male models today thanks to a renewed interest in figurative art and shifts in our cultural understanding of gender norms. For better or worse, social media has also helped accustom us to seeing men as subjects again. 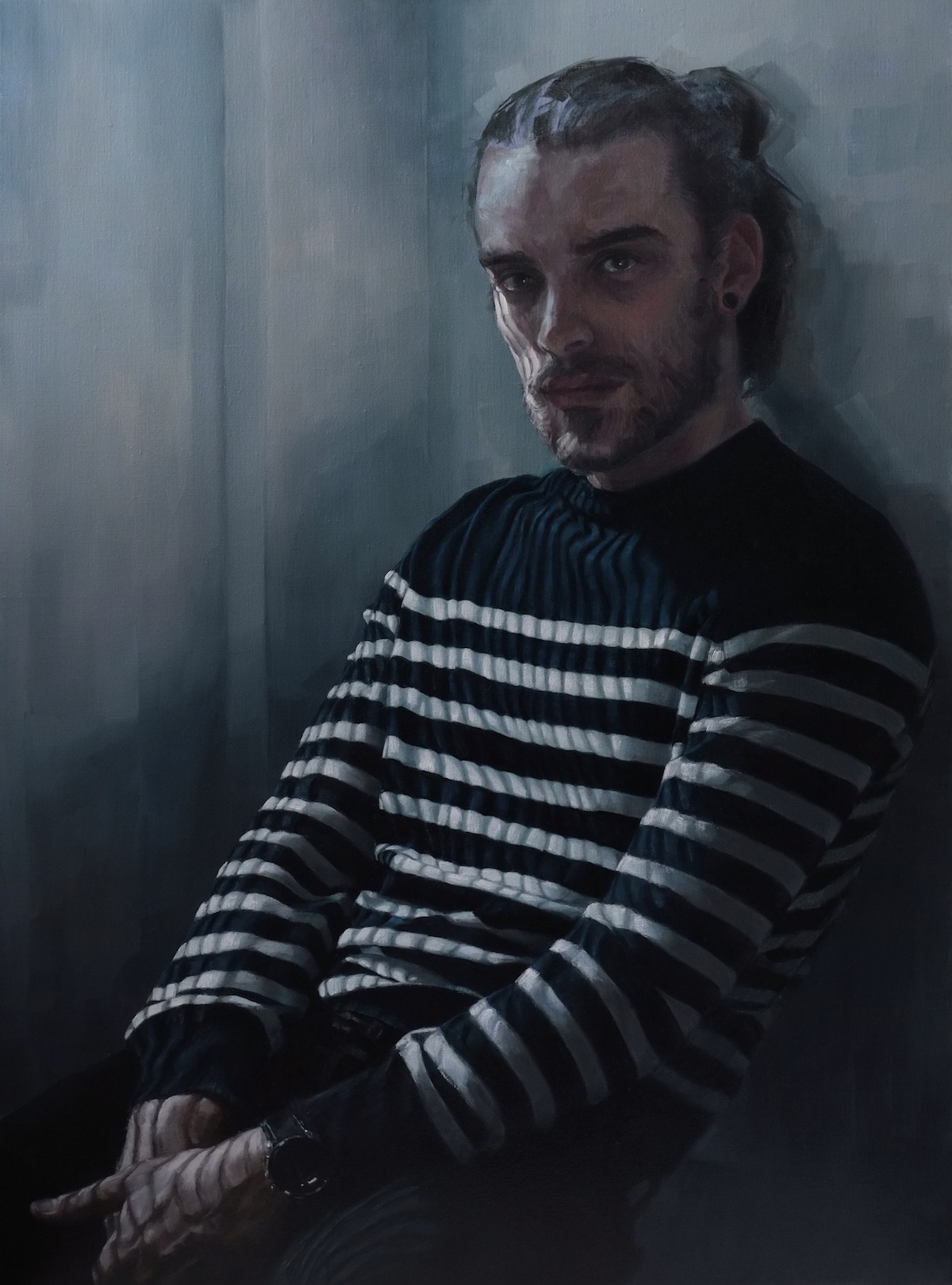 ‘The Killing Of A Flashboy'

Why is it important for you to show different shades of masculinity beyond the stereotypical businessman or beefcake?

I think there’s value in documenting the times we live in, even if it comes from a point of view we don’t understand. The reason we, as viewers, find historical portraits so fascinating is because they document a reality that we don’t live in anymore. When you look at Rigaud’s self-portrait—not to mention his portrait of Louis XIV—you see a man dressed, coiffed and posed in a way that is at odds with our contemporary concept of how a man should be.

For me, this goes beyond just appearance and into the emotional state; the expectations of how a man is supposed to represent himself or be represented are still quite rigid. I like the idea of playing with these expectations and finding room to explore and expand them, to show that men can be vulnerable or wistful or sensual and still be masculine. 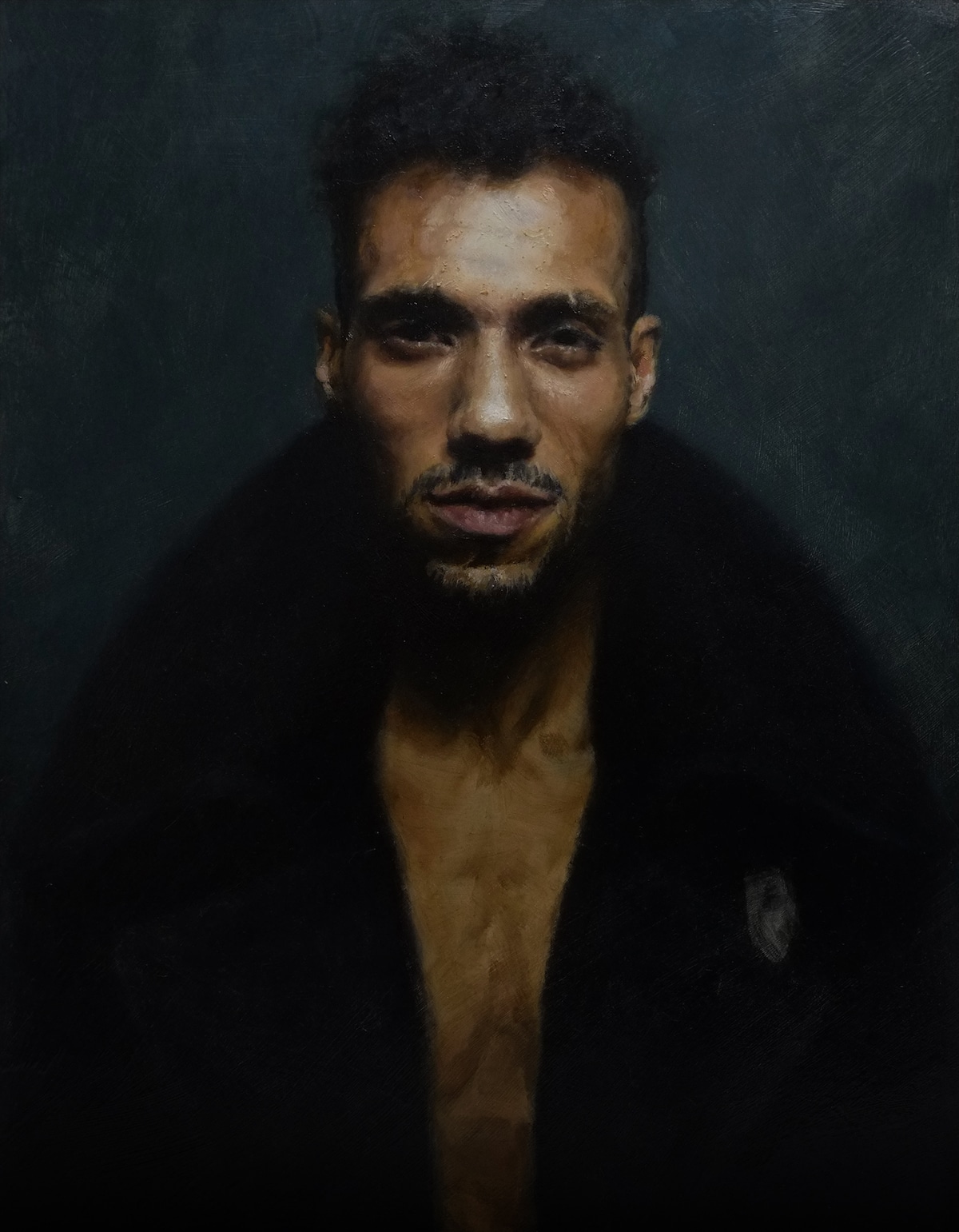 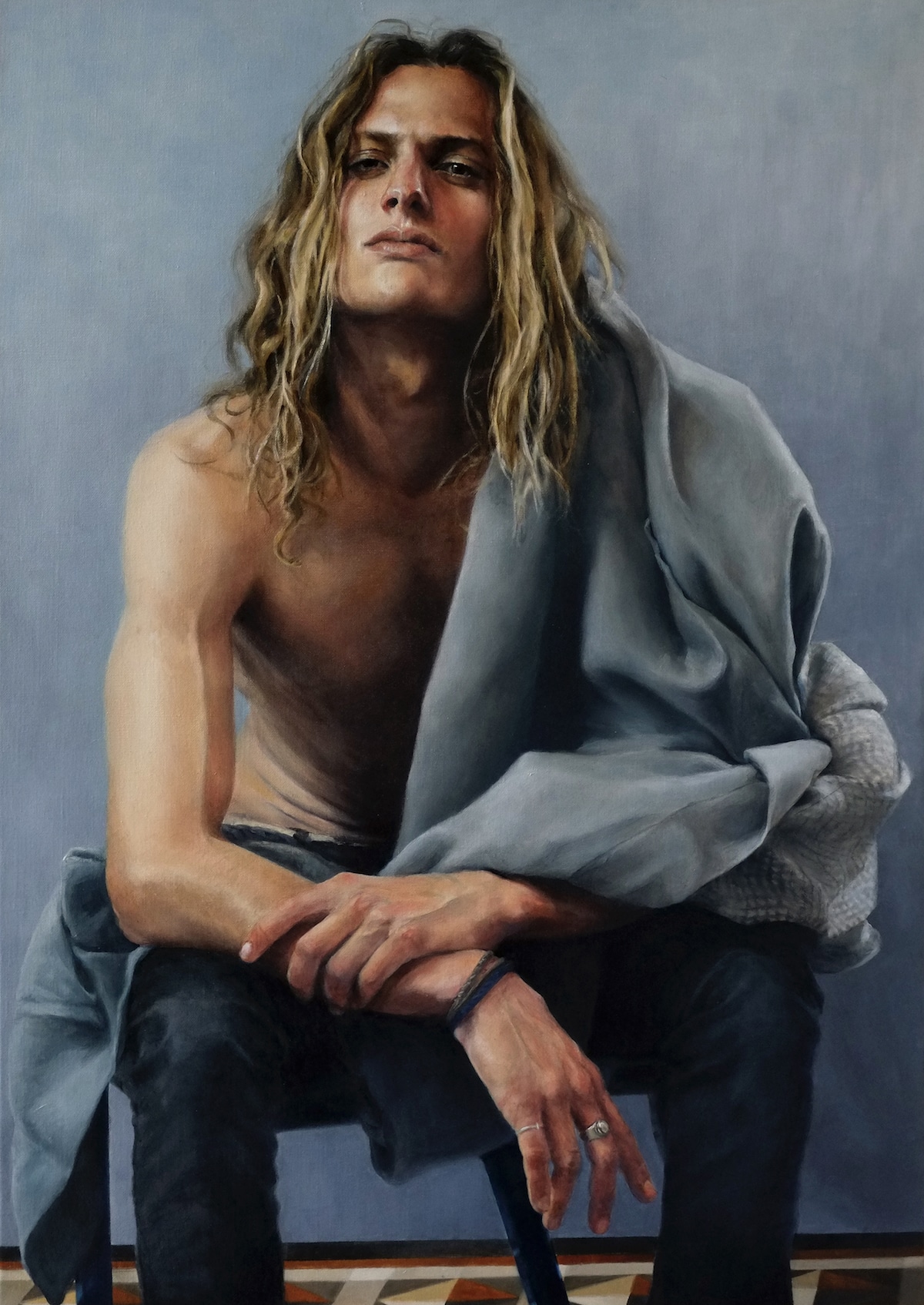 ‘Europe Is Our Playground'

Tell us about your creative process. How do you work with your models to achieve such vulnerability?

I’m not a painter who approaches the work as square inches that need to be covered accurately, I tend to work on the whole painting at once, jumping between areas. This is partly to set contrast and color notes, but mostly because I find the whole process pleasurable and I want to get a feel for the impact of the piece as quickly as possible.

Each painting starts with a concept or mood I want to develop and with a model that I feel can best inhabit that space. Many of my models are from Instagram and it’s quite common that when we start to work together, they get into their “selfie” pose, the one that they feel shows them off to their best advantage.

Moving them away from the security of this pose allows something truer to shine through, and I think that is what reads as vulnerability in my paintings. I try to learn as much about my models as possible through questions and observation because I think this informs my decisions while painting. It’s as if they’ve given me permission to reveal something about them to the world and it’s my responsibility to take in enough information to do that justice. 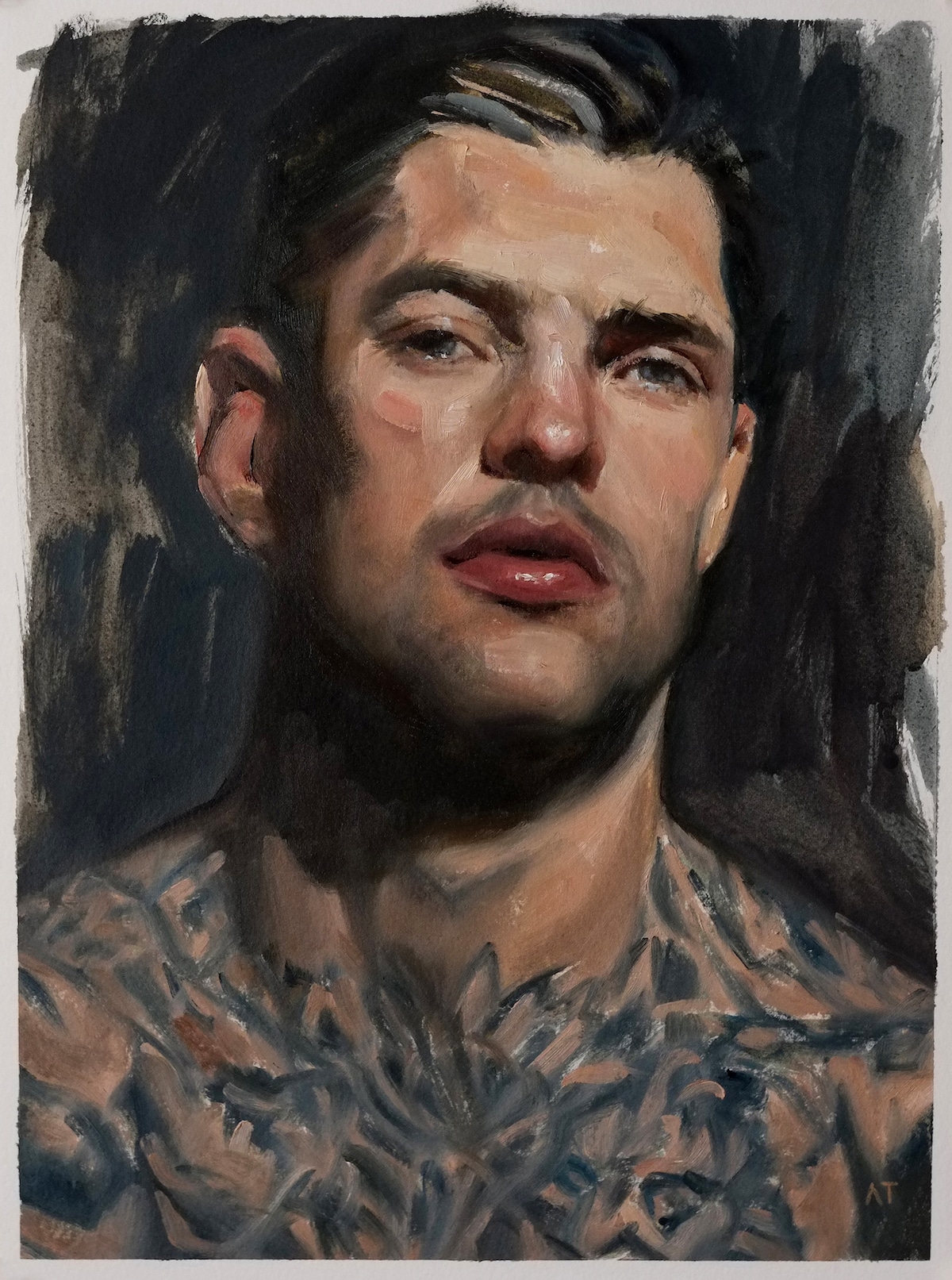 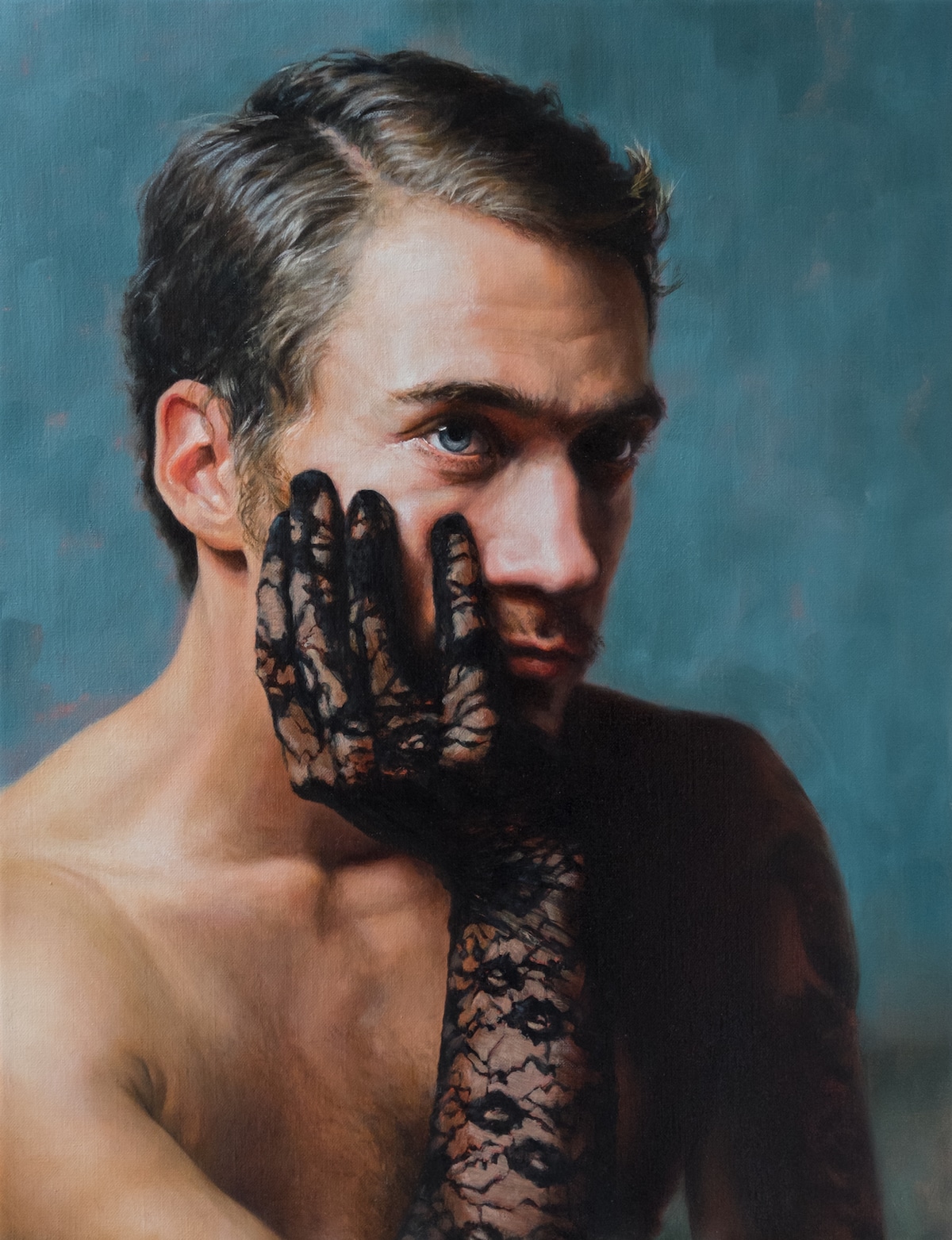 What's the reaction of most models when they see the finished piece?

Mostly it’s a reaction of delight, even when I’ve pushed the model outside of his norm—the motorcycle engineer in the lace glove comes to mind. Sometimes it’s like they are seeing an aspect of themselves for the first time and that sense of discovery is exciting to witness.

What do you hope that people take away from your work?

I don’t really have any expectations. It’s always cool to hear what someone sees in my work, that they noticed something about a piece that they weren’t expecting or that they feel a connection to one model or another. I don’t really use symbolism but I do name all of my paintings after songs that are meaningful to me so I love when someone knows the song and finds a way to relate it back to what I’ve done. Of course, I’m also happy if people just appreciate my paintings as beautiful objects. 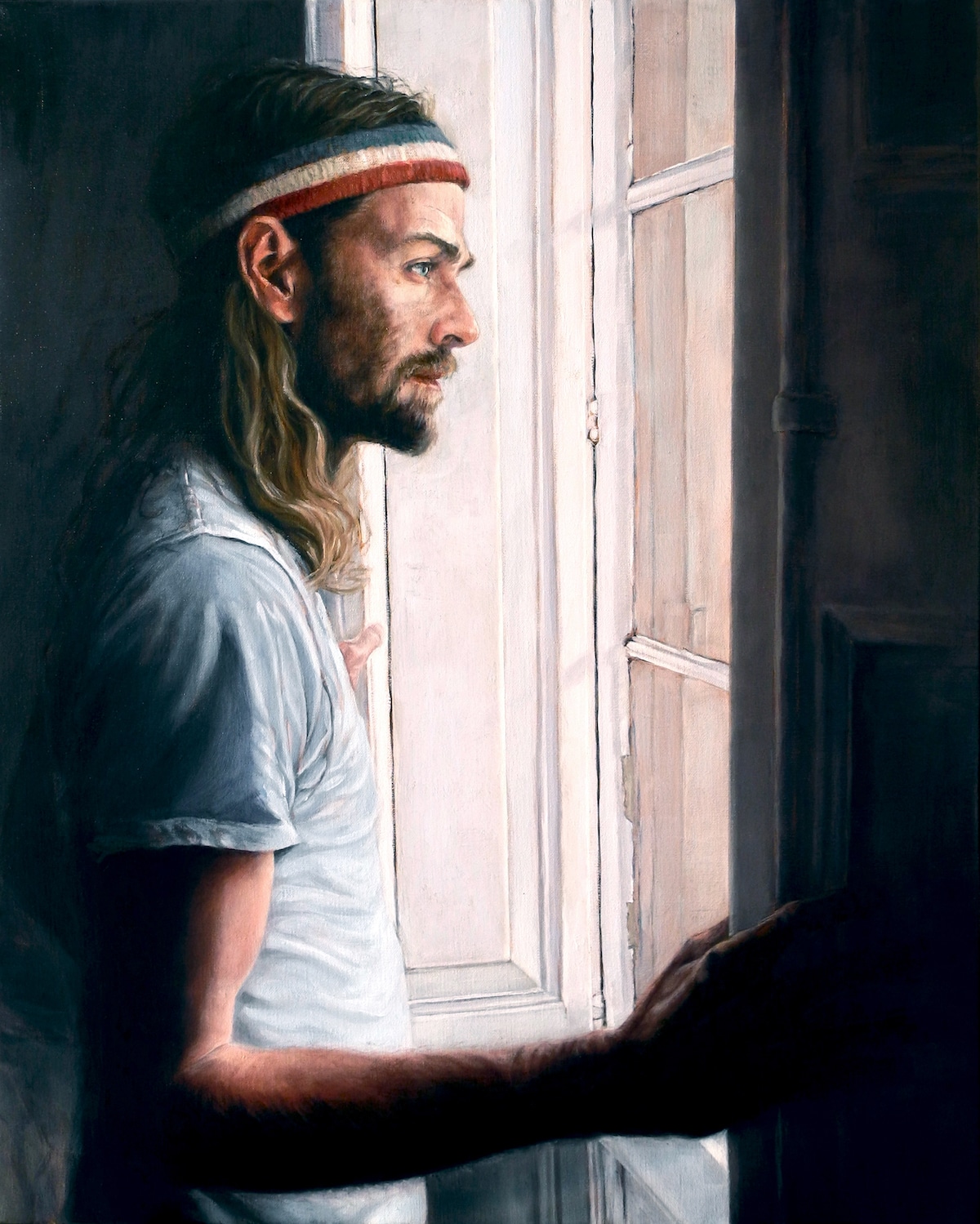 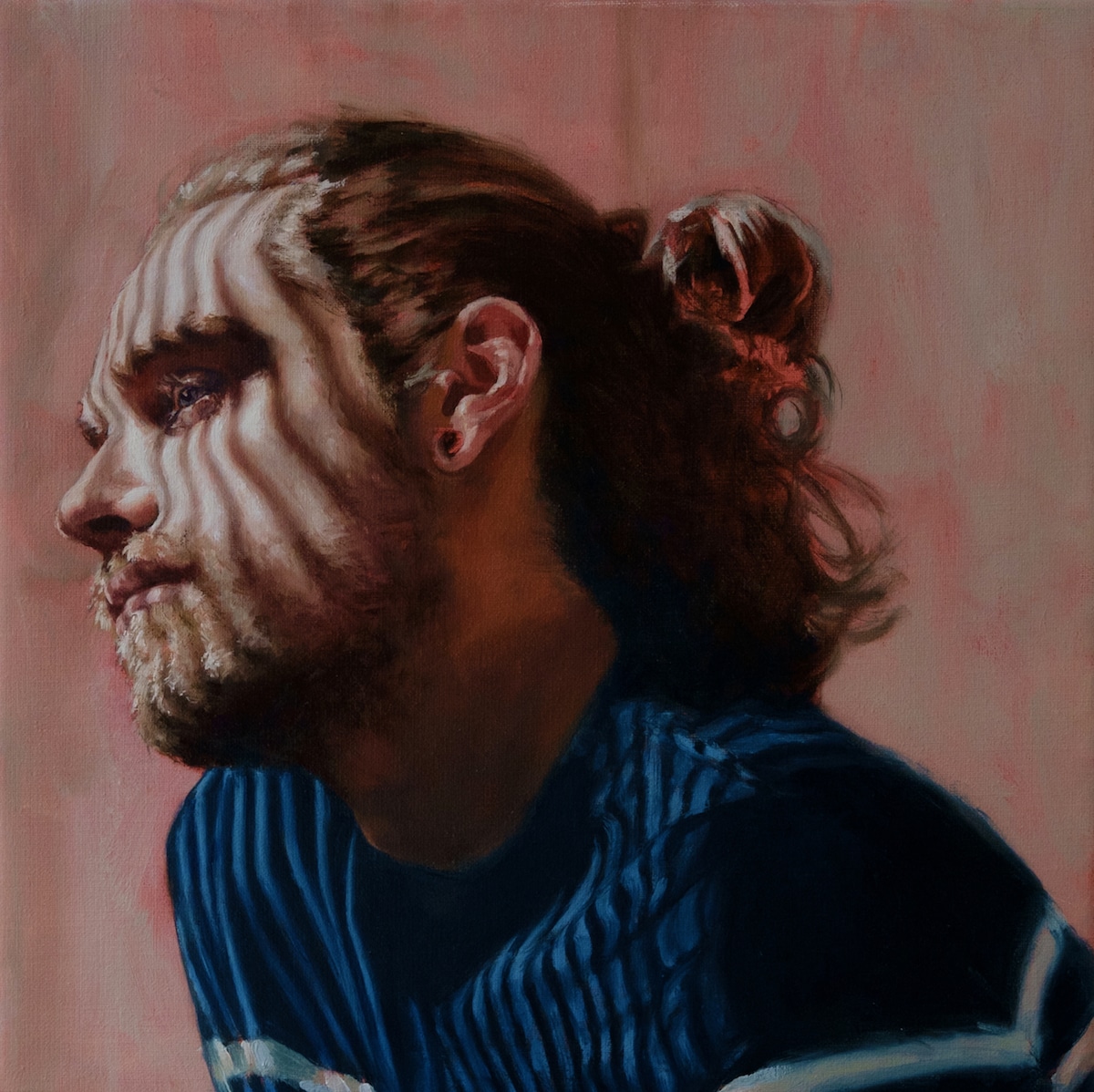 Yes! I was invited to create a piece for Painting the Figure Now, a group show at the newly-minted Wausau Museum of Contemporary Art in collaboration with Poets&Artists. The show, which features work from an international roster of figurative artists, opens July 7 and runs until September 28, 2018.

I also have a photographic piece in a show called Visions of Venus running at the Zhou B Art Center in Chicago from April 20th to June 8th, 2018. 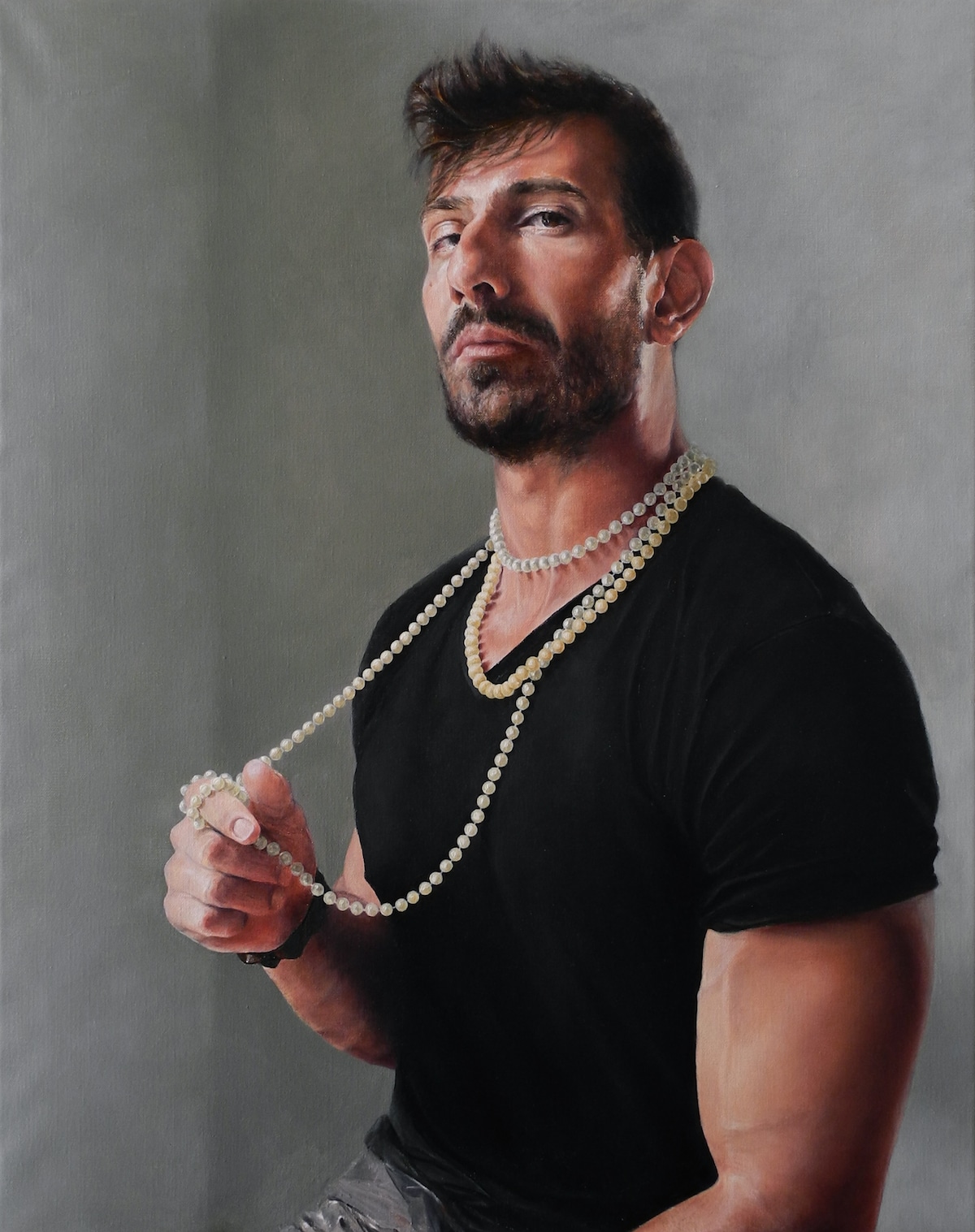 My Modern Met granted permission to use photos by Alessandro Tomassetti.

Interested in contemporary figurative painting? Share
Like My Modern Met on Facebook
Get Our Weekly Newsletter
Become a
My Modern Met Member
As a member, you'll join us in our effort to support the arts.
Become a Member
Explore member benefits