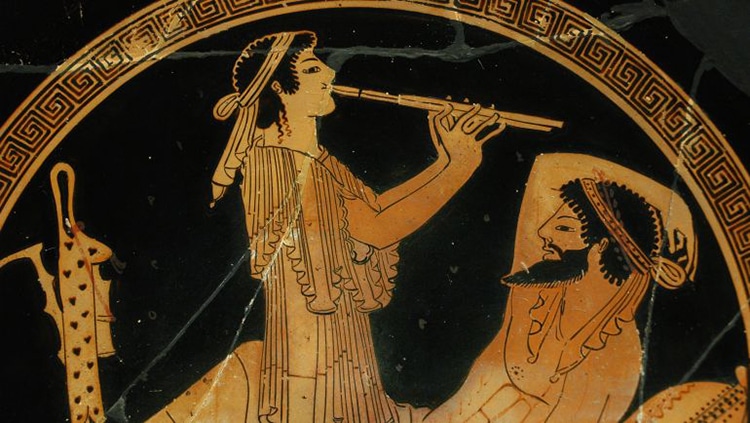 Image via Realm of History

So far, researchers have managed to learn a lot about ancient Greek culture by interpreting the surviving fragments of age-old pot decorations, mosaics, paintings, and statues. From these discoveries we’ve been able to learn that music played an integral part in the lifestyle of ancient Greece. Artwork dating from around 750 to 400 BC often details scenes of music being played at social occasions, such as parties and funerals. The ancient instruments are known to cover three instrumental families—stings, wind, and percussion—with the most common instruments being the lyre (a string instrument that looks like a small harp) and the guitar-like zither. However, more than 2,000 years later, we’ve only just recently been able to learn exactly how they would have sounded. Thanks to newly discovered ancient documents, a group of scholars have figured out how to recreate precise renditions of ancient Greek music.

Armand D'Angour, a musician and classics tutor at Oxford University, explains: “The [ancient Greek] instruments are known from descriptions, paintings and archaeological remains, which allow us to establish the timbres and range of pitches they produced. And now, new revelations about ancient Greek music have emerged from a few dozen ancient documents inscribed with a vocal notation devised around 450 BC, consisting of alphabetic letters and signs placed above the vowels of the Greek words.”

After some decoding, David Creese, one of D'Angour's colleagues from the University of Newcastle, was able to play and record the oldest surviving complete musical composition—titled Seikilos—an epitaph that was inscribed on an ancient, 2,000-year-old marble column. Listen as Creese sings and plays the notes on his handmade zither-like instrument—an “eight-string canon.”

Listen to David Creese’s precise rendition of what ancient Greek music sounded like.