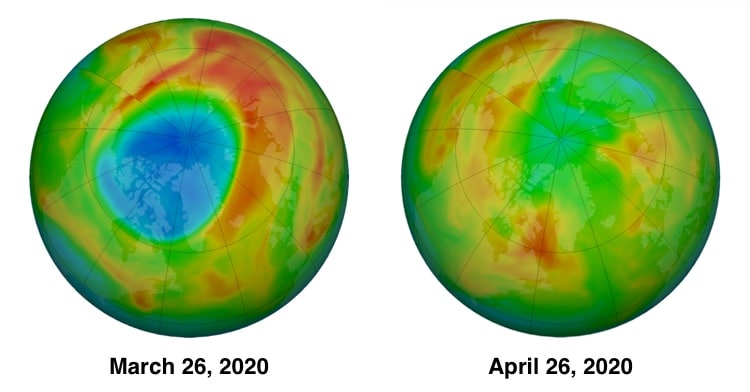 In a victory for the planet, a large hole in the ozone layer has closed up on its own. Located over the Arctic, it first formed in mid to late March and was one of the largest ozone holes the area had ever seen. As the ozone is responsible for absorbing the sun's UV rays, its health is of the utmost importance to our planet. That's what makes the hole's closure such a relief.

To be clear, the hole's appearance and repair were not caused by human activity. Scientists from Copernicus Atmosphere Monitoring Service (CAMS), who have been monitoring the area, attribute the ozone hole to something more natural. A large low-pressure area made from swirling cold air—known as a polar vortex—was particularly strong for several weeks in March. This caused cold air to remain trapped in the North Pole, the by-product of which was the formation of high altitude clouds that cause chemical reactions to stimulate ozone depletion once sunlight returns.

So, now that the polar vortex is starting to break down, the air between the ozone-depleted and ozone-rich layers are mixing once again. This has caused the hole to heal itself as ozone levels begin to rise once again. This is great news, as the Arctic doesn't typically have as much ozone depletion as the Antarctic ozone layer. It's this area that most people are familiar with, as the 1985 discovery of a hole over the South Pole caused big changes in aerosols and refrigerants.

Interestingly, there's also good news about this ozone hole. Thanks in good part to measures taken as part of the Montreal Protocol, a 1987 accord that phased out manmade chemicals harming the ozone, the Antarctic ozone hole is shrinking. These changes, coupled with variations in the Southern Hemisphere's air patterns, have contributed to the slow closing of the hole.

In a win for the planet, an ozone hole over the Arctic has now closed.

The unprecedented 2020 northern hemisphere #OzoneHole has come to an end. The #PolarVortex split, allowing #ozone-rich air into the Arctic, closely matching last week's forecast from the #CopernicusAtmosphere Monitoring Service.

IKEA Develops Curtains That Can Break Down Pollutants and Purify Air