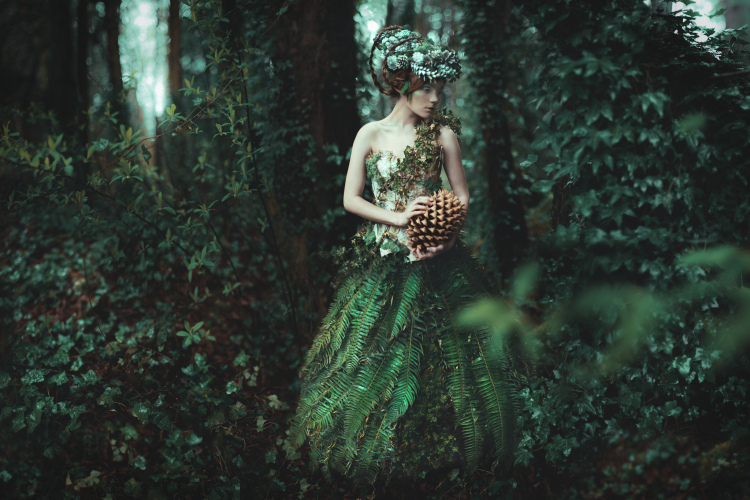 Kindra Nikole's dreamlike imagery is rich with creativity and vision. The intricacies of the handmade wardrobe adorning her characters, shows her dedication to her craft, often using fresh foliage that needed to be assembled early the morning of the shoot. Created as a tribute to her late mother, you can see the love and care in each piece, transporting you into a fairytale world as a way to cope with the stress of life. We wanted to talk with Kindra about the creation of her images with a behind the lens look into “Dreamscapes.”

Tell us a bit about your journey into photography?

Initially, I dabbled with black and white film photography my sophomore year of high school, where I developed my own images. I adored the darkroom process and how methodical it was. After high school, I was met with some very challenging personal times, as well as discouragement from a professional photographer I'd met, which pulled me away from photography and art in general for a good ten years. Looking back, I'm amazed that I allowed anyone to deal such a heavy blow to my own personal conviction about my art and the act of creating itself, but sometimes I think it's the only way to truly find yourself artistically. One day, about three years ago, I bought myself a used Nikon D40 on a whim. It wasn't until I began a daily 365 project, taking one photo a day for an entire year, that I really found my photographic voice. After that journey, I knew that I'd never be parted from my camera–it had become as essential to me as eating or sleeping. 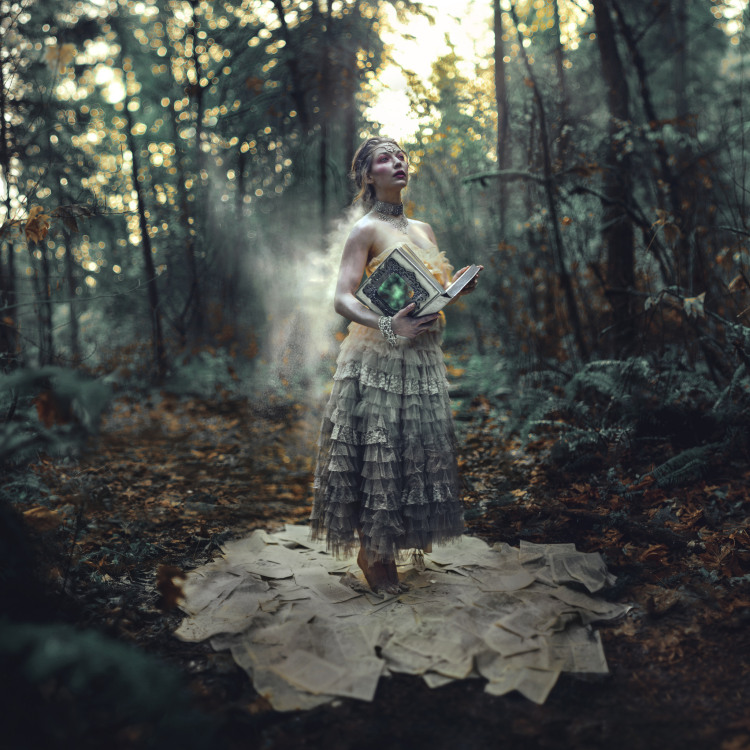 What inspired your Dreamscapes series?

Quite a few things, really. I'd been following the work of Kirsty Mitchell for a little over a year at the point I decided to begin work on Dreamscapes–I was completely in awe of the amount of thought, detail, and time she put into creating entirely new worlds in her images. I knew I wanted to take my work to the next level, and I saw Dreamscapes as a path to that. I'm a huge fan of dark fantasy and most anything ethereal, and I wanted to use inspiration from the countless books and films of my childhood to create a small universe within my work–something I could tell an ongoing story with.

I also noted how Kirsty used her Wonderland series as a means of coping with the painful loss of her mother–my mother unexpectedly passed almost two years ago now, and I couldn't deny that such a huge undertaking as Dreamscapes would be a wonderful distraction as well as testament to my mother. I think having someone to look up to creatively is very important for anyone as an artist, and Kirsty is certainly one of those people for me. 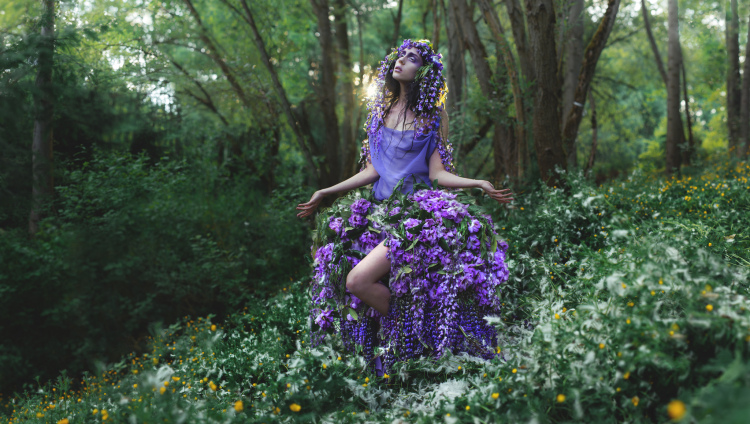 How much planning goes into a shoot?

It varies from image to image. Some shoots require months of planning, crafting, and prep work. Scouting the proper location, figuring out what type of weather and time of day to shoot, creating the props and outfits, finding the appropriate model, and so on.

Recently, I've begun to take a looser approach to shooting, casting aside some of my own stipulations I've placed on Dreamscapes. When I realized I had only shot one Dreamscapes image since August, I knew that I was being too rigid, so I allowed myself to loosen the reigns a bit. A few of the Dreamscapes shoots I've recently worked on, while still methodically planned out, were smaller productions, allowing me to continue the series more regularly without such huge gaps of time between, which feels good.

I think it's really important as an artist to step back from your work–a lot–and reassess your approach and be blatantly honest with yourself without tearing yourself down too much. It's easy to rip oneself to shreds–that's just the ego billowing up, just like it puffs up when a person isn't realistic about their work. It takes insane amounts of practice to get to a space where you can be your own best critic and find balance. For me I often find that I'm simply being too rigid with my work. When I realize that, I jostle myself and force myself out of my very controlled comfort zone. It just has to happen sometimes. 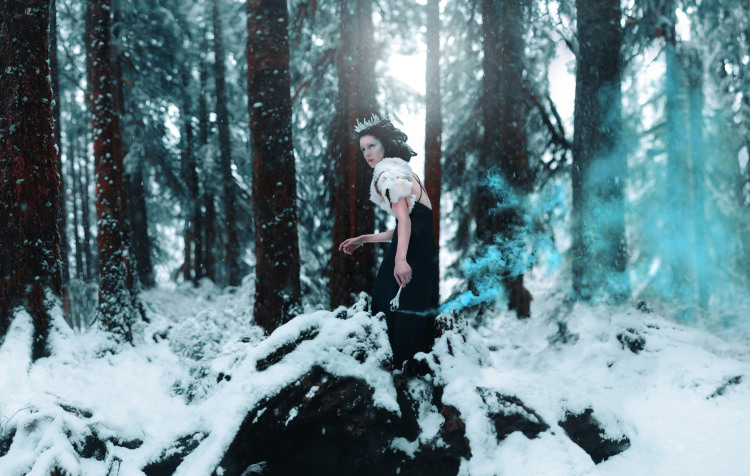 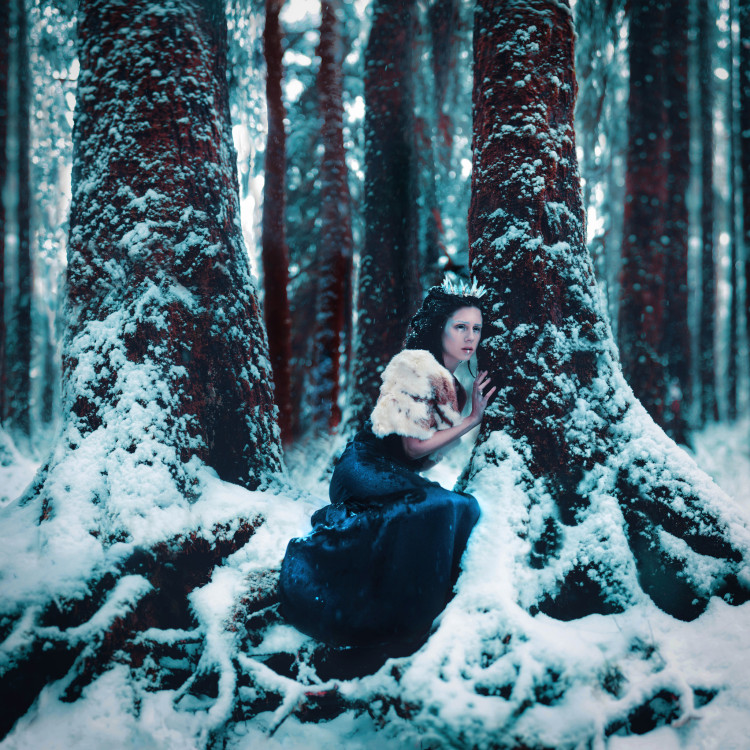 How much work went into designing the props and costumes?

Quite a bit, depending on the shoot! So far, the most involved, challenging shoots in the series were The Forest's Secret and Advent of Plenitude. Working with fresh foliage is particularly challenging, and not just because of the sheer volume I had to collect. Fresh foliage out of water wilts within mere hours, so collecting and assembling the fern skirt and the purple-wildflower skirt were exceptionally challenging. Both skirts had to be assembled and shot on the same day, which meant getting up at very early hours to collect the foliage, and then working like mad while burning myself countless times with a hot-glue gun until finally shooting later that day. I've started to think it's impossible to use a hot-glue gun without burning yourself at least ten times each use…

Some shoots I do most of the prep work at the location, such as in Germination, where I used gold paint on the model once I had her in position…precariously perched atop gnarled roots that were nearly vertical… Or melting candles directly onto the model in Aegis and Sleeper–I wouldn't have blamed the models if they loathed me after those shoots. Each shoot brings with it new challenges to overcome, and I love pushing myself to overcome these challenges and prevail by creating the image I'd envisioned in my head despite those obstacles. 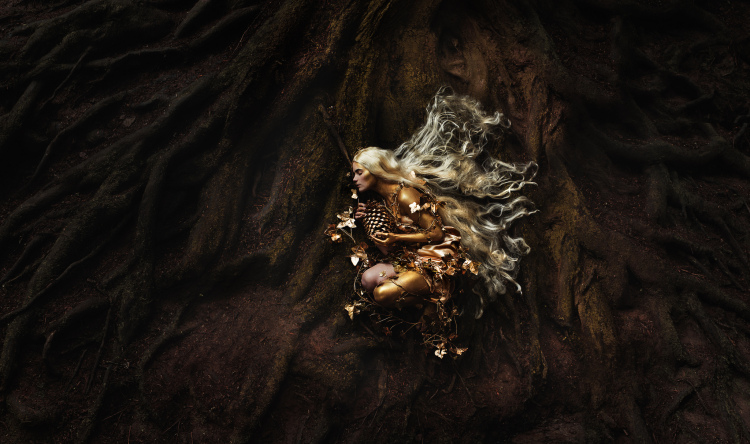 What does a typical day of shooting look like?

For Dreamscapes, it usually involves an early rise time with questionable amounts of coffee and tea to keep myself and the model amped up throughout the day. (Figuring out transport for some of the larger, lavish props and costumes sometimes involves planning ahead by borrowing a friend's larger vehicle.) I also make sure to stock loads of protein bars, because I've found that on the day of the shoot, I tend to forget to take care of basic human needs like feeding myself. I'll then make my way by car to the location of the shoot, which is usually fairly close to where I live, carting buckets of props, smoke bombs, and whatever other necessary items with me through forest trails. Since I have very fleshed-out ideas for the concepts of Dreamscapes, it's usually not a very long round of shooting before I have what I want–I typically know exactly how I want the model posed, expression, and mood, so it's simply a matter of getting things into place and then snapping some quick shots! 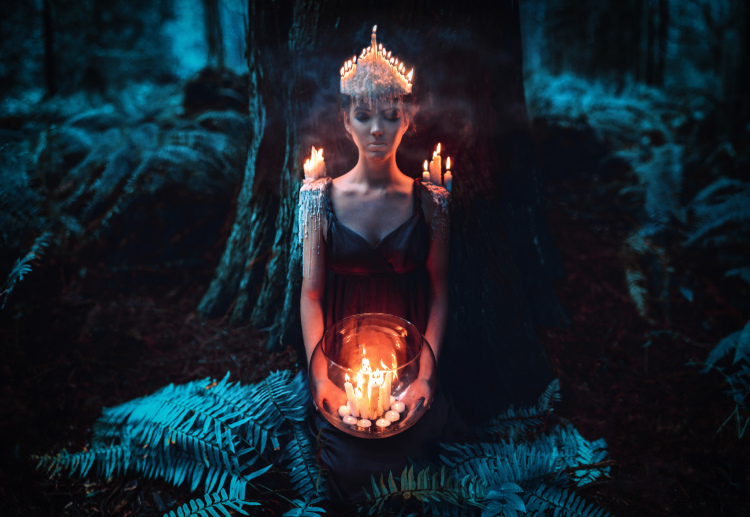 What are some challenges you have faced while creating this series?

Weather, weather, weather. Shooting almost exclusively outdoors has caused me to have an even deeper respect for nature–a reverence for it. I like that it has taught me how to adapt and be a little freer at times with my concepts. I tend to be very particular and methodical when it comes to Dreamscapes, and sometimes, despite everything being planned out to perfection, the weather won't cooperate. When this happens, the model is already fully prepped in makeup and ready to go, so I find ways to work with what nature has given me. In this regard, it can be both a frustrating and humbling experience, and I appreciate it for that.

The other tricky thing can be determining how to transport some of the larger, more lavish props and costumes, without damaging them. With some of the upcoming shoots I've planned, I imagine this will only become more challenging as time goes on…

What have you learned from this project?

I've learned how to be more patient, first and foremost. I've learned that sometimes it's best to wait until the perfect conditions exist for that photo I'm trying to shoot, and I've learned that sometimes I have to admit to myself when a shoot didn't go how I'd have liked and I need to reshoot it. The project has also helped teach me how to better work with a team of people–I'm so accustomed to working almost entirely solo that this project has pushed my comfort zones in terms of my creative space, and I love that. 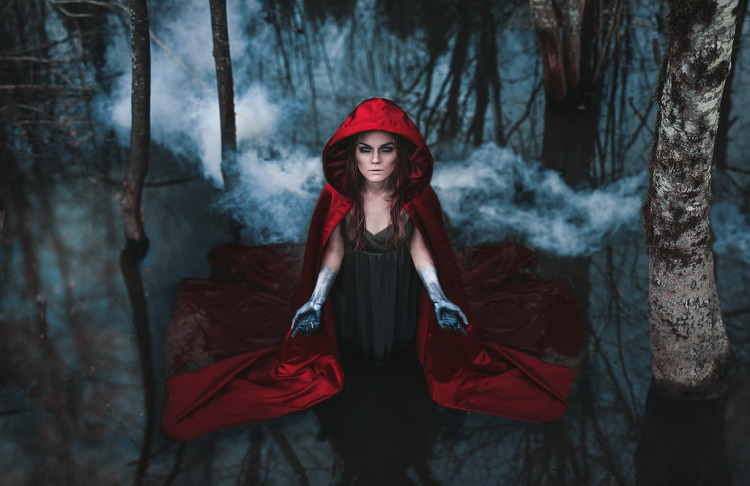 Is this series ongoing?

It is! There's no end in sight–I intend to just create images for the series until I feel satisfied… Which means…maybe it'll carry on perpetually.

What are your plans for the future?

To keep working as hard and as often as possible and to never give up on my aspirations and dreams. We are never done growing both as artists and more importantly as people, and I feel very excited with the understanding that for me, this is really only the beginning of a long, unending journey with art and photography. I've had some tangible goals like hopefully landing my first gallery showing or being able to travel and teach workshops, but I think what's most important is diligently working hard to express myself and communicate with the world in a way that touches people on an individual level. Just as I escaped into books, video games, films, and playing in the forest as a child, I hope that my art can be a similar means of escape for those who are keen to follow my journey as I stumble, fall, soar, and trip my way through life. 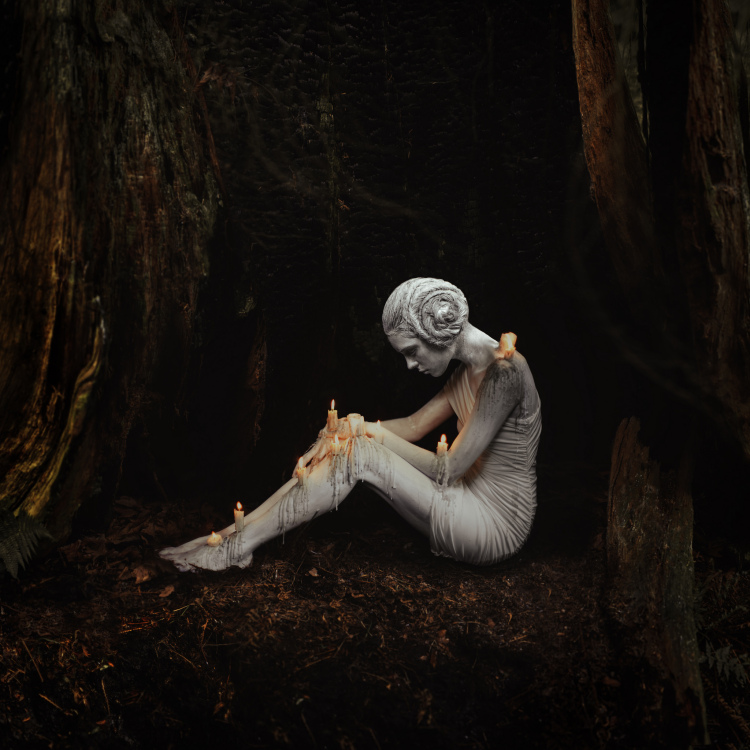