Davy Crockett: From the Alamo to Walt Disney and Everywhere in Between 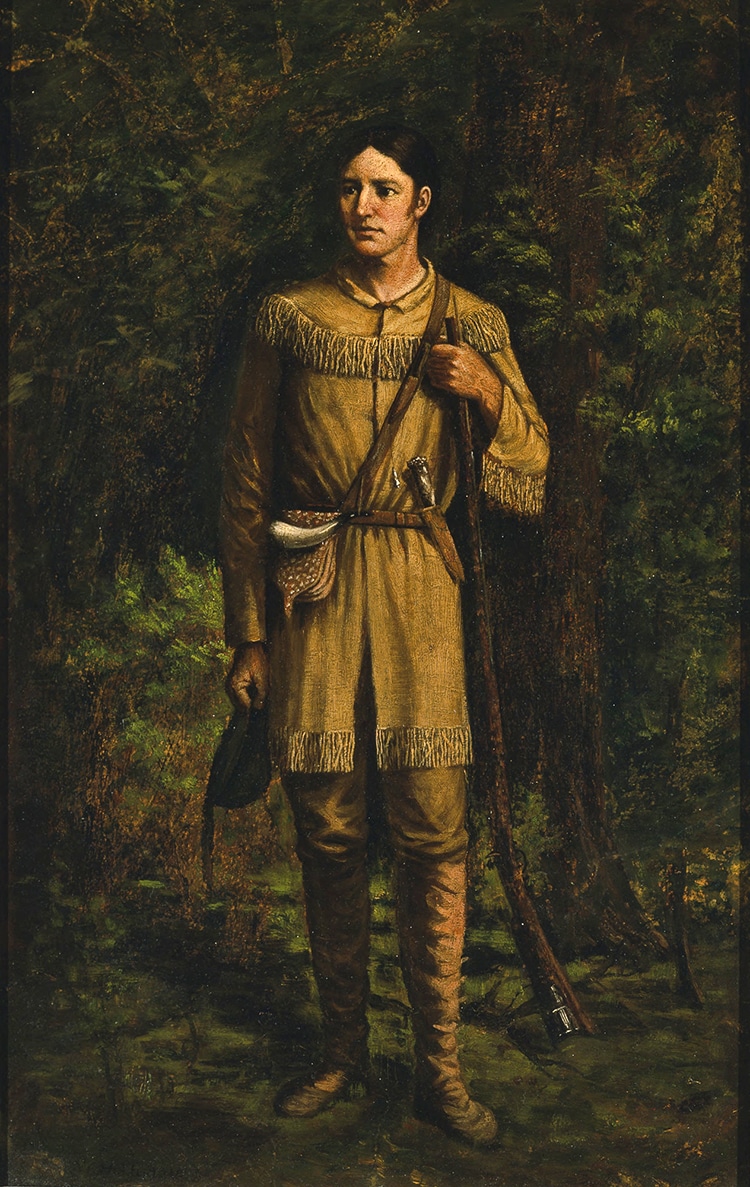 Davy Crockett, the famous congressional frontiersman who died during the siege of the Alamo Mission, is just as well known for his real-life exploits as his comic book adventures and romps through Walt Disney’s cinematic playground. He is truly a pop culture icon having featured in theater, comics, ballads, feature films, and television series. While you might know him best as the coonskin cap wearing American outdoorsman, you might be surprised by the real man behind the myth.

Davy (David) Crockett was born on August 17, 1786 in eastern Tennessee to John and Rebecca Crockett. One of nine children, Davy’s early life was often spent working in servitude to pay off his family’s debts. Ever the frontiersman, Davy lived and breathed the wilderness, helping his family survive in the backwoods of the Tennessee countryside. He married Mary Finley on August 14, 1806, and the two of them had three children. In 1813, he enlisted in the Tennessee militia and participated in fights against the Native populations. It was as a scout in the militia that he witnessed the massacre of Indigenous peoples at Tallushatchee—perhaps contributing to his later rebuke of Andrew Jackson’s proposed Indian Removal Bill in 1830. 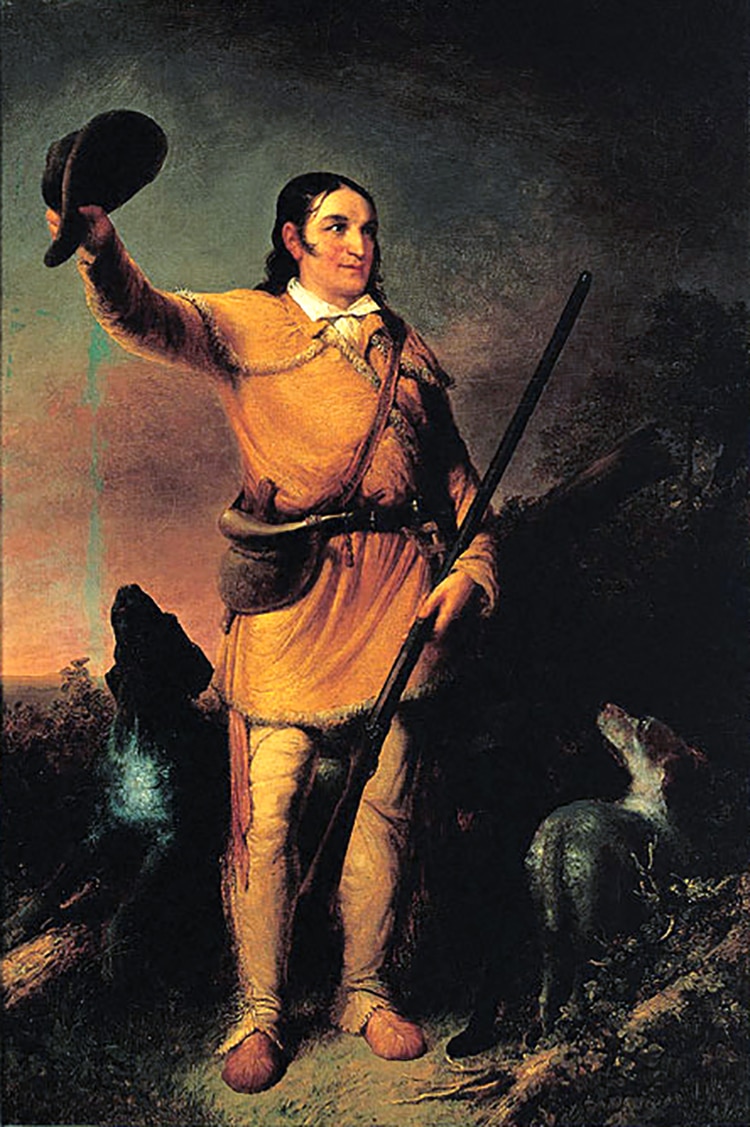 His first wife passed away in 1815, and Crockett later married Elizabeth Patton, a widow who brought three of her own children into their marriage. The two would have three children together, totaling nine children in the mixed Crockett household. The family continued to move further out west while the former scout campaigned to win a congressional seat. He finally won his bid in 1829 for a seat on the House of Representatives, and would maintain that seat on-and-off for a few years. He was not re-elected after his 1833 term though, and left to take landowning opportunities in Texas. Yet, there was a rebellion brewing there and Crockett would be compelled to fight.

The Texas War for Independence and the Alamo 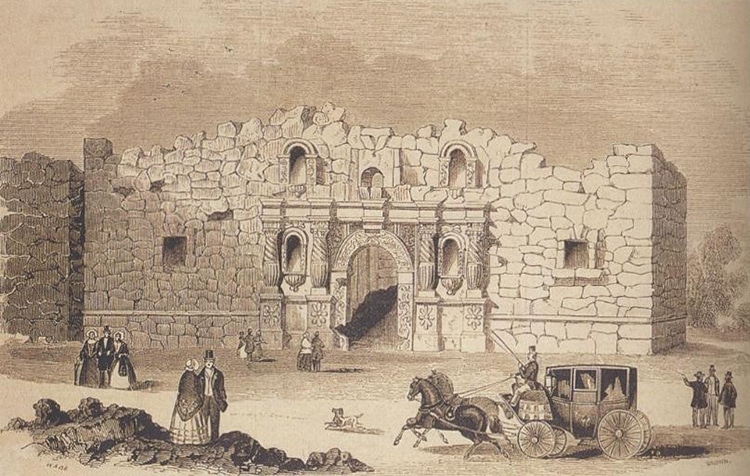 Texas, prior to its accession by the United States, fought against the Mexican empire for independence starting in 1835. Crockett swore his loyalty to this provisional Texas government in 1836, saying, “In my last canvass, I told the people of my District, that, if they saw fit to re-elect me, I would serve them as faithfully as I had done; but if not, they might go to hell, and I would go to Texas. I was beaten, gentlemen, and here I am.”

On February 23, 1836, Mexican forces led by General Antonio Lopez de Santa Anna laid siege to the Texas-owned mission-turned-fort, The Alamo. The Alamo's mere 200 Texan defenders were far outnumbered by the massive Mexican army, but withheld bombardments for 13 days before being overpowered. Davy Crockett, who had arrived at the mission in early February is known to have died during the siege, though accounts vary as to whether he died before the mission was overpowered or was taken hostage and then executed once it had been seized. Cries to “Remember the Alamo” rang throughout the Texas landscape and fueled the fires for independence. To this day, the Alamo Mission stands as a testament of bravery and heroics for Texans everywhere.

Crockett’s heroic death at the Alamo Mission in 1836 only encouraged the growing mythos surrounding the frontiersman. Prior to his death, a play called The Lion of the West by James Kirke Paulding, premiered in 1831. Initially Crockett hated how the main character, Colonel Nimrod Wildfire, was a caricature of himself; but, after the play grew popular, he embraced the artistic homage and publicly attended a production in December 1833.

Capitalizing on the American fable that Davy Crockett was becoming, a series of fifty almanacs were published between 1835-1856. These almanacs kept Crockett’s life in the public consciousness, and his appearances in colorful comic books in the 20th century kept kids everywhere fascinated by his story. He was even featured in early film adaptations, like the 1916 film by Pallas Pictures, simply titled Davy Crockett. However, it was Walt Disney’s interpretation of Davy Crockett’s life that made him the pop culture icon he is today. 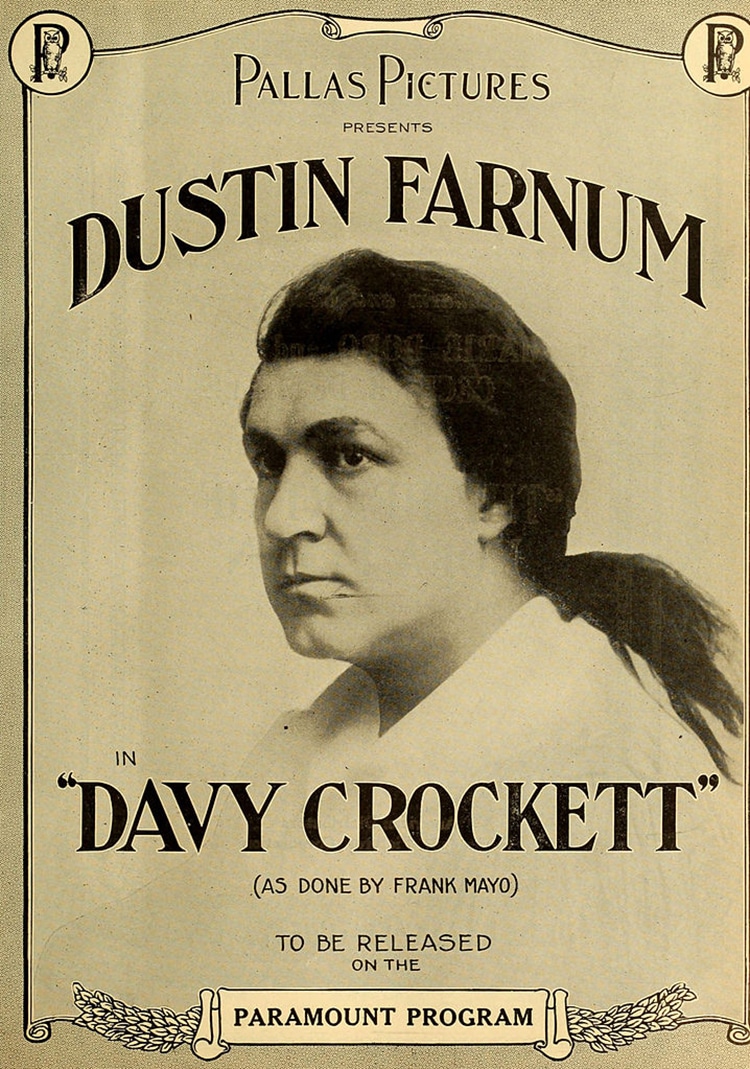 Davy Crockett was a five-part miniseries starring Fess Parker as the titular character that was released on ABC in the Disneyland series between 1954-1955. The first three episodes were later edited together for a theatrical film release of the newly titled Davy Crockett, King of the Wild Frontier in 1955. The film was a summer blockbuster smash, and the song “The Ballad of Davy Crockett” performed by Bill Hayes, reached #1 on the record charts for the year. Little Davy Crocketts with their cheap, reproduction coonskin caps and cap guns were seen everywhere that summer. Davy Crockett could be seen on every lunch box and thermos around schools.

Other films have taken a stab at bringing Davy Crockett’s story to life, but none have been able to replicate the magic of that mid-century summer. John Wayne’s portrayal in The Alamo (1960) is often forgotten in favor of his roles in other westerns like True Grit. While Billy Bob Thornton’s depiction in 2004’s The Alamo is more historically accurate than his Disney predecessor's, his Davy Crockett did not surpass the fame of Fess Parker’s famous “Davy Crockett, king of the wild frontier.”

In life and death, Davy Crockett was seen as an American icon; but in 1956, he became the folk hero we know him as today.