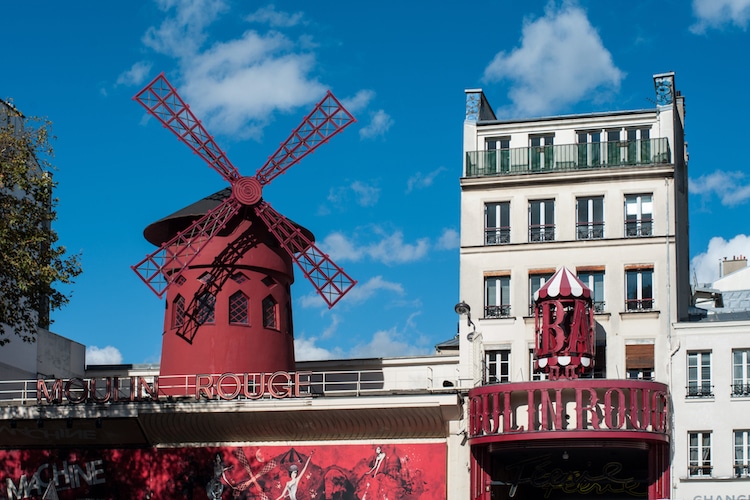 Coated in candy-colored paint and topped with a windmill, the Moulin Rouge is one of Paris' most recognizable icons. The celebrated cabaret has stood as a symbol of fun and fancy since La Belle Époque, when it first popped up in the heart of the City of Love.

Given its iconic reputation, you probably know a thing or two about the Moulin Rouge. Still, some of its story may surprise you, from the nostalgic purpose of its propellors to the fire that almost closed the curtain on this legendary landmark. So, sit back and enjoy the show as we spotlight the cabaret's fascinating history. 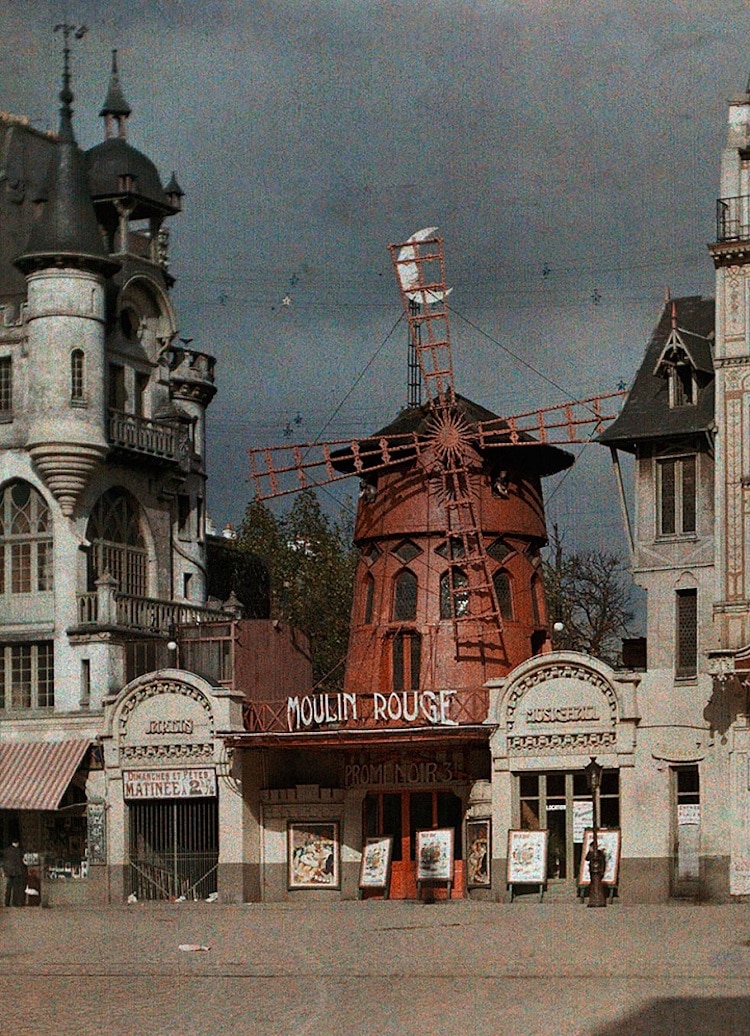 The Moulin Rouge made its grand debut on October 6, 1889. Co-founded by Catalan entrepreneur Joseph Oller and French showman Charles Zidler, the cabaret was built at the bottom of the hill of Montmartre, an artistic neighborhood in Paris. By the middle of the 19th century, Montmartre—once a village on the outskirts of the city—had become a melting pot. Here, members of all Parisian social classes mixed, setting the scene for the cabaret's wild popularity.

In its formative years, the Moulin Rouge made a name for itself as Paris' premiere place for entertainment. Every night, guests would pour into the club, tempted by an offering of bubbly and a show. The cabaret quickly became known for the lively routines of its dancers—namely, the Can-can, a high-energy dance that called for a chorus-line of dancers performing famously revealing high kicks. Though likely invented several decades prior, this scandalous choreography would go on to define the Moulin Rouge, largely due to the colorful fin de siècle posters by Toulouse-Lautrec. 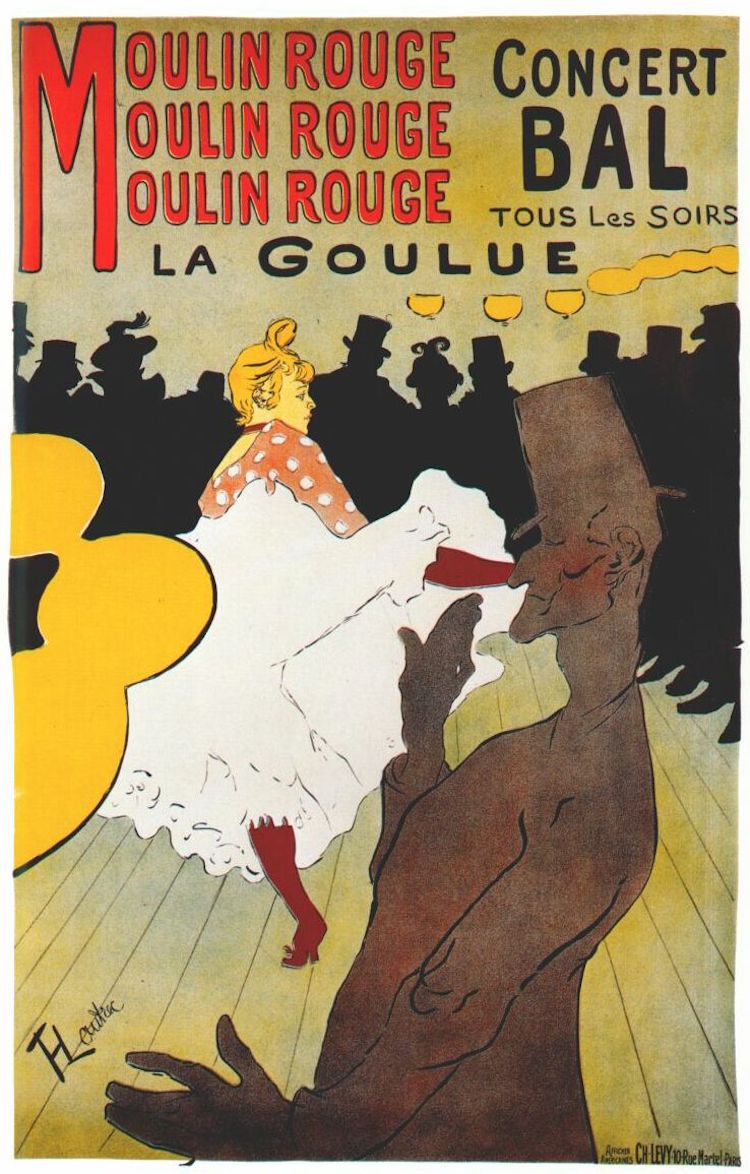 In addition to its alluring entertainment, visitors to the Moulin Rouge enjoyed its elaborate decor. Inside, they were wowed by mirrored walls that infinitely reflected sparkling chandeliers and the twisting skirts of spirited dancers. Outside, they were welcomed by whimsical constructions, including a colossal plaster elephant-turned-opium-den in the garden and, of course, the moulin rouge, or “red windmill.” 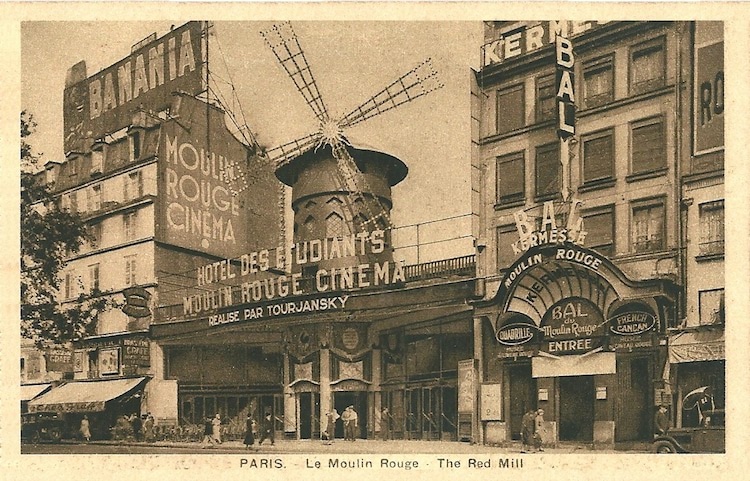 Why is there a windmill on the Moulin Rouge? While the exact reason is not crystal clear, historians believe that Oller and Zidler crowned the cabaret with a windmill as an homage to Montmartre. In the 18th century, several windmills inhabited the village. In 1809, two of these structures—the Blute-fin (also known as the Moulin de la Galette) and the Radet, which were used to mill flour and press local grapes, respectively—were purchased by the Debray family. Years later, they were converted into guinguettes, or drinking establishments. With this in mind, it is likely that Oller and Zidler aimed to keep Montmartre's moulin-based guinguette tradition alive.

Unfortunately, the windmill that we see atop the Moulin Rouge today isn't the one that was erected in 1889. On February 27, 1915, a fire ravaged the original Moulin Rouge, dramatically sparing little in its path. “Montmartre’s famous music-hall, the Moulin Rouge, is little more than a heap of ashes now,” reported the International Herald Tribune the following day. “Early yesterday morning a fire broke out in a property room—probably owing to a short circuit—and in a few moments it had spread to the entire building and by eight o’clock, when the firemen at last got the conflagration under control, only the façade and a portion of the stage remained standing.”

The Show Must Go On 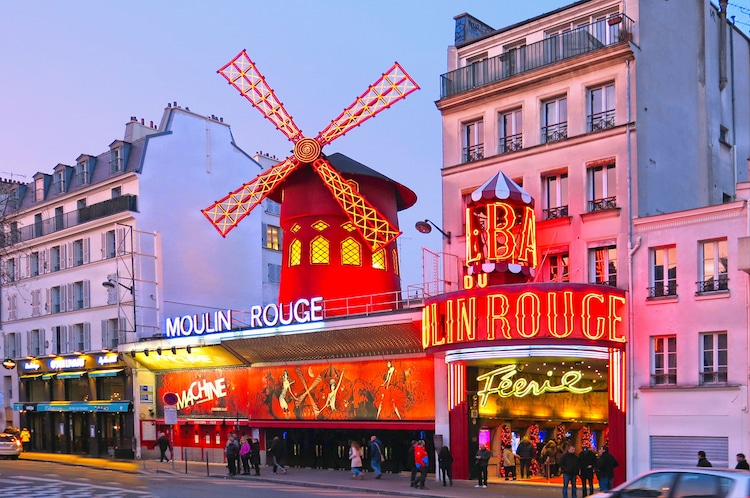 For the next six years, the site would remain under construction. In 1921, the Moulin Rouge reopened to the public under new ownership. The reconstructed cabaret retained its dance-hall origins, hosting famous performers like Mistinguett (a dancer and actress who was, at one point, the world's highest-paid female entertainer), Maurice Chevalier, and Jeanne Aubert. In 1929, the ballroom was converted into a space more closely resembling a contemporary nightclub, shifting the Moulin Rouge's focus from dancehall to all-encompassing music venue. Over the next few decades, the cabaret would welcome high-profile singers and entertainers, including Edith Piaf in the 1940s, Josephine Baker in the 50s, and even Frank Sinatra in the 80s.

In the 1960s, the Moulin Rouge revisited its roots with Frou Frou, a “grand spectacle” inspired by its revues from La Belle Époque. This star-studded show saw such success that the cabaret's owner at the time, Jacki Clérico, decided to keep retro revues—all of which playfully begin with the letter “F”—in rotation. This has culminated in a 57-year string of spectacles that, along with the ever-turning windmill, continues to dazzle audiences to this day.