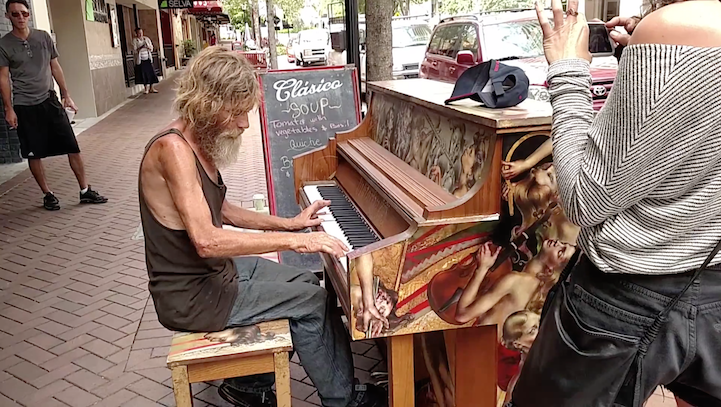 On Main Street in Sarasota, Florida, crowds recently gathered around an ornately painted piano to hear a homeless man play the best cover of Styx's “Come Sail Away“ that you will ever hear. This gifted man is Donald Gould, and this particular performance is just one of the many impromptu concerts he holds on a daily basis. At any given time, Gould will sit down at one of Sarasota's sidewalk pianos and grace listeners' ears with his mesmerizing musical talent.

While a video of him playing the Styx piano cover has gone viral, this is not the only instrument that Gould can play. The 51-year-old started playing clarinet as a kid and continued to do so as a member of the U.S. Marine Corps. After his service, he returned home to Michigan to study music education, with the hope that he would one day be able to teach. “I took music theory and ear training, and I had to learn how to play every instrument from the piccolo down to the tuba,” Gould says in the follow-up video. “I can write parts just like a handbook.”

Unfortunately, three semesters short of graduation, Gould ran out of money and was unable to finish his degree. To support his growing family, he decided to take on many odd jobs until his wife passed away in 1998. “They sat me down, and they told me what had happened, that my wife had passed away… and I just lost it man,” the musician told ABC 7. In the midst of his grief, Gould went down a destructive path and ended up losing his son to Social Services. Now, he is not only searching for his 18-year-old son, he is also hoping for a second chance at life.

Since the video became an instant success, a GoFundMe campaign was started to help the extraordinary pianist secure a home, a car, and to complete the last three classes needed for his music theory degree. In the meantime, Gould continues to play piano every day and to teach the children that occasionally sit beside him on the stool. “It doesn't matter how they play, if they play crappy or good, I always clap for them,” he says. “I'm a nurturer, I'm a teacher.”