Microbiologist Does Simple Demonstration to Show How Face Masks Are Effective 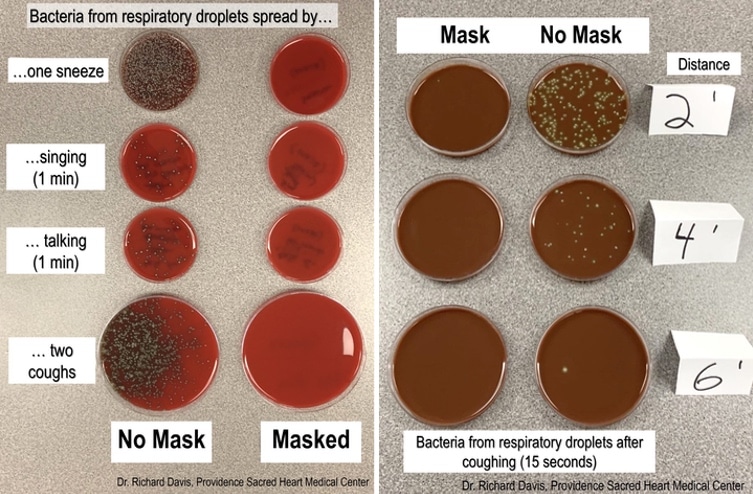 Sometimes having a visual is the best way to understand something. This is particularly true when it comes to science. And as wearing a face mask has become part of our daily routine, more and more people are questioning if it really matters. As summer sets in and heats up, how much will wearing another layer across your face really protect you? One microbiologist took matters into his own hands to show just what happens when you stay covered up.

Dr. Richard Davis is the Clinical Microbiology Lab Director at Providence Sacred Heart Medical Center in Spokane, Washington. After seeing a lot of misinformation about the dangers and usefulness of face masks, he decided to do a demonstration.

In the first demo, he placed agar cultures close to his face to show how many respiratory particles transferred while talking, singing, sneezing, and coughing with and without a face mask. The results are clear. Just one sneeze without a mask fills the culture with bacteria colonies that form where the respiratory droplets fell. Coughing gave a similar effect and even singing and talking for one minute caused bacteria transfer. Meanwhile, the masked cultures were basically clean.

For the second demonstration, Dr. Davis looked at distance, as this is the other common method of keeping the coronavirus from spreading. Placing bacteria culture plates two, four, and six feet away, he coughed hard for about 15 seconds both with and without a mask. Again, the results are clearly in favor of a face mask. While most droplets hit the plate when he was less than six feet away, a face mask blocked nearly all of them—no matter the distance.

My mask vs. no mask demonstrations got perfectly summarized in this brief 34 second video. Masks keep your respiratory secretions to yourself! @providence_phc https://t.co/kkK0KIhSbf

So, it looks like face masks are two for two. Of course, Davis reminds us that these demonstrations do not show the spread of viruses like COVID-19. “Bacteria are incredibly different from viruses! But since we expect respiratory droplets to be what primarily spreads #COVID19, I exploit the presence of (easily to grow and visualize) bacteria in respiratory droplets, to show where they go,” he explains.

Many of Dr. Davis' followers asked if the results would be different if he tested different types of masks. While he hasn't tried it, he said that he would expect that the outcome would be “essentially the same.” That's because his demonstrations show how talking, sneezing, etc make droplets come out of your mouth and that these droplets carry bacteria. They also show how a face covering blocks most of those droplets.

When people want to know the effectiveness of different types of masks, they're essentially looking for information on how much of the virus is blocked. That, of course, isn't what Dr. Davis tested. He only looked at bacteria and then inferred that viruses would also be included in the mix. But we don't know how much of the virus or what type of virus.

Overall, with a simple act, Dr. Davis does show us just how much liquid comes out of our mouths—even when simply talking. And, he clearly shows that the use of a mask will block almost all of that liquid. Given what we know about how the coronavirus spreads, isn't that reason enough to keep your face mask handy?

What does a mask do? Blocks respiratory droplets coming from your mouth and throat.

First, I sneezed, sang, talked & coughed toward an agar culture plate with or without a mask. Bacteria colonies show where droplets landed. A mask blocks virtually all of them. pic.twitter.com/ETUD9DFmgU

In the first, he talked, sang, coughed, and sneezed with and without a face mask. Dots on the cultures are bacterial colonies. 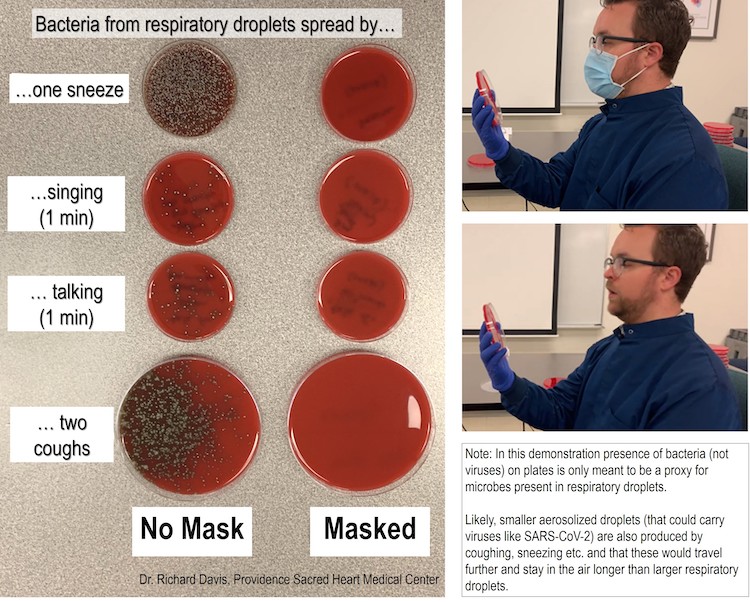 In the second, he stood at different distances with and without a mask. The winner is clear—face masks lessen the spread of droplets. 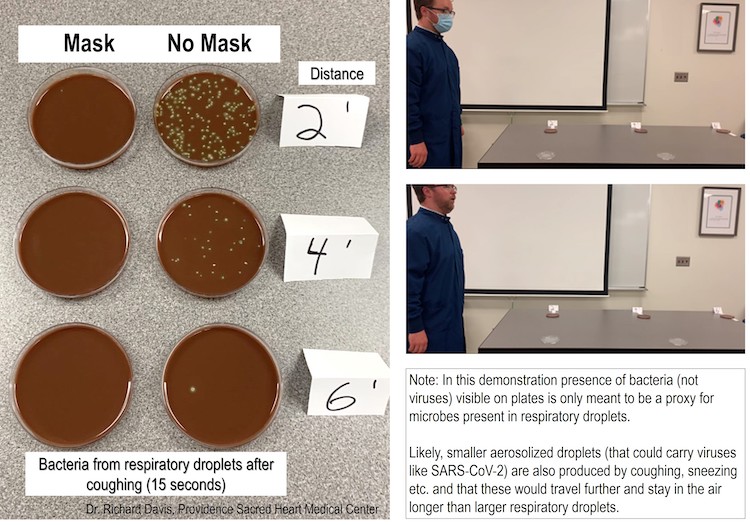 Even though these demos focus on bacteria, they offer clear indications of the amount of respiratory droplets one releases into the air which could also carry viruses like COVID-19.

DOES NOT SHOW: what is the number, size, and distribution of respiratory droplets produced by coughing/talking etc.

DOES NOT SHOW: could these droplets carry viruses (like SARS-CoV-2), does a mask block THOSE

(Based on what we know you can intuit/infer this, but it's not shown)