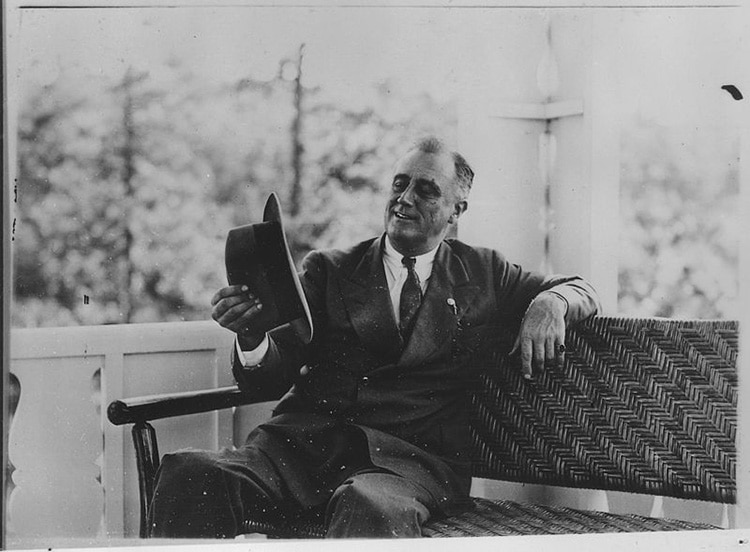 Former President Franklin Delano Roosevelt (a distant cousin of President Theodore Roosevelt) was born into a wealthy New York family in 1882. Entering into the American political sphere in 1910, FDR (as the public would take to calling him) was soon elected President of the United States and would guide the American people through the Great Depression and World War II. However, an extremely significant element to his legacy that is often brushed over in his mythologization is his struggle with polio induced paralysis.

Read on for the story of FDR, his fight with polio, and the unfinished portrait that still hangs in his “Little White House” home in Warm Springs, GA. 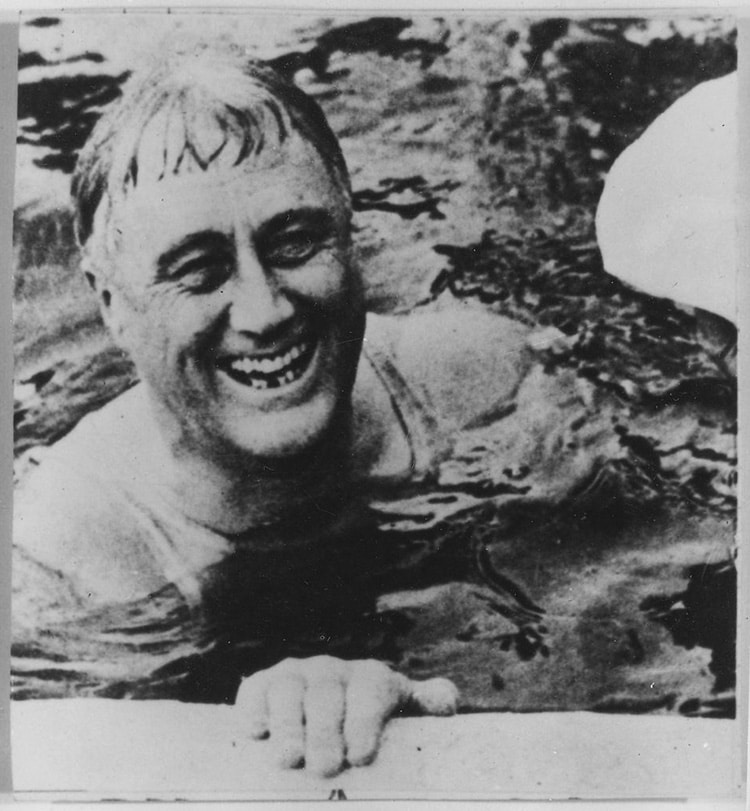 In 1921, FDR found himself struggling to move his lower limbs. Unsure of what exactly was causing his illness, doctors misdiagnosed him with a variety of ailments and administered treatments that did not help improve his paralysis. Dr. Robert Lovett was the first to diagnose FDR with infantile paralysis (polio) on August 25, 1921. This diagnosis was particularly surprising given the fact that most children grew immune to the disease as they got older, and FDR was 39 years old at the time of the diagnosis. However, political stressors and a childhood spent in ill health meant that the future president was susceptible to the disease.

Living as a disabled man in the early twentieth century was not easy for Roosevelt. He often steered talk away from his disability, and tried to mask his paralysis by holding onto someone’s arm and using a cane to swing himself from step to step to model walking. To further cloak his condition, he created his own wheelchair out of a modified dining room chair with bicycle-like wheels attached so that visitors who saw it wouldn’t notice it as quickly. Ever the stubborn man, FDR even adapted an automobile with hand pedals to allow himself to drive a car.

After being fit with leg braces that locked at the knee to give him some semblance of mobility, Roosevelt heard from a friend, George Foster Peabody, about a boy who had supposedly been cured by swimming in the natural springs in Warm Springs, Georgia. In 1924, FDR took a trip to the resort, and while the waters did not cure his disease, he fell in love with the small town, eventually building his own home in the area, which was affectionately called “The Little White House.”

FDR continually invested in this quaint community. In 1926, following financial problems, he bought the resort and renovated it into a rehabilitation center for polio patients. Later, in 1934, he hosted the first Birthday Ball to celebrate his birthday and raised one million dollars in donations for his Georgia Warm Springs Foundation. This eventually led him to found the National Foundation for Infantile Paralysis in 1938. 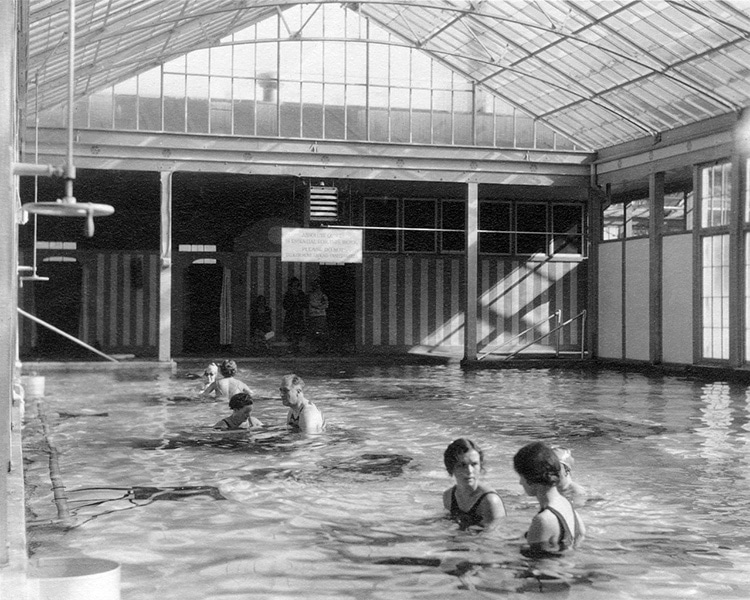 The Unfinished Portrait of FDR

Unfortunately, FDR's health began to decline as the continued stress of World War II and a fourth consecutive presidential term ravaged his body. The strain from the polio combined with arteriosclerosis, which thickened the walls of his arteries, to weaken his immune system. For the first time, the wartime president, whose statuesque perseverance amazed the American public, was forced to address congress while seated. Shortly after, FDR retreated to his estate in Warm Springs, GA in order to try to rest and recover. It was there that the president met with the artist Elizabeth Shoumatoff to paint a portrait of his likeness.

Despite Shoumatoff being a Republican and Roosevelt a Democrat, the two were friendly with each other, and Roosevelt had commissioned her work before. She arrived at the Little White House on April 9, and noticed that the president was looking rather ill. On the third day of sitting for the portrait, Roosevelt suddenly complained of a headache and collapsed onto the floor. He had suffered a massive cerebral hemorrhage on April 12, 1945, which would prove fatal. Shoumatoff and the other guests were immediately spirited away from the home, though the portraitist was quick to collect her unfinished portrait and bring it with her. 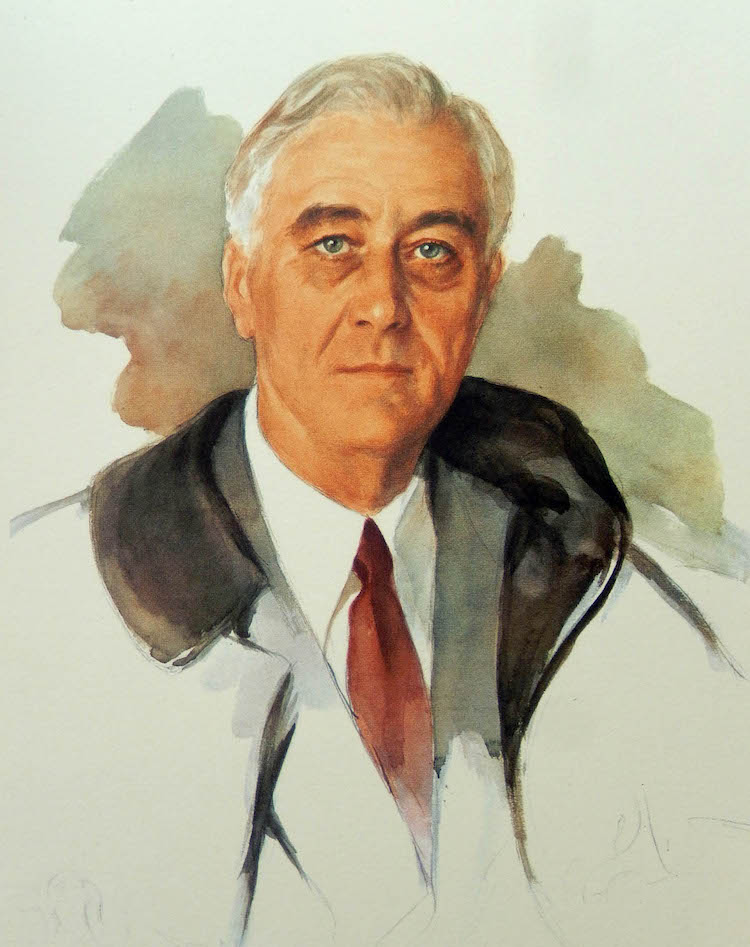 Later, Shoumatoff would recreate this portrait from memory, but the one she worked on until the moment of FDR’s collapse remains unfinished. She donated the Unfinished Portrait to Warm Springs, where it still resides today. Despite its incomplete nature, the portrait stands as a unique testament to the strength, but ultimate mortality, of the man behind the myth.