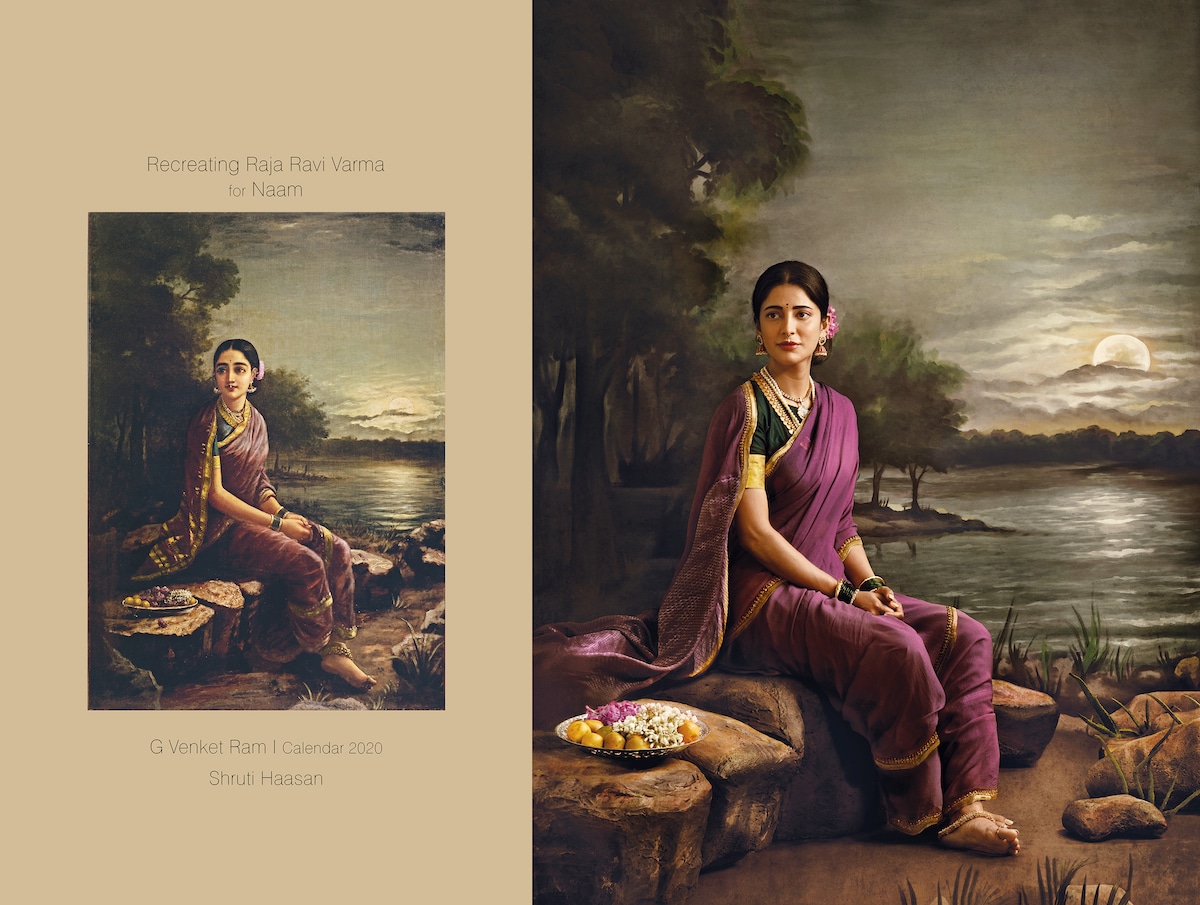 Photographer G. Venket Ram has translated famous paintings from the 19th century into exquisite photographs that grace a 2020 calendar. Using the renowned Indian painter Raja Ravi Varma as his inspiration, Ram and his team were meticulous in recreating the fine details of the Varma originals with South Indian actors. In some instances, Ram fused painting and photography by adding backdrops that appear to be enlarged versions of the source material. It’s a choice that is an homage to Varma’s technique, which is notable as being an example of European painting approaches with a “purely Indian sensibility.”

“I’ve always admired the understanding of the mystery of light in paintings by the great masters,” Ram tells My Modern Met. “The ethereal lighting in Varma’s paintings, done more than a hundred years ago, is simply breathtaking.” He got the chance to explore Varma’s work during a photo shoot for the NAAM Charitable Trust, an organization that “empowers single women from the underprivileged section of the society.” Suhasini Maniratnam, the founder of NAAM, asked Ram to take pictures of a few women who portrayed the subjects in Varma’s paintings.

After the shoot, Ram shared a couple of images on social media. “The resounding response I got for those, inspired me to do a full-fledged recreation of 12 iconic portraits of the great artist,” he recalls. The project was then expanded into a calendar that commemorates the 10th anniversary of NAAM. “These paintings are brought to life by stunning South Indian women with grit and substance,” Ram says. “Amongst them, we featured Chamundeswari, who is a beneficiary of NAAM. Facing the camera for the first time in her life, she surprised us by exuding confidence, like a professional model.”

Ram and his team worked hard to bring his photographs as close to the originals as possible, from the jewelry to the props that were used. Their dedication has paid off. “It was an enriching experiencing and very satisfying to see the reach that the calendar has had within the few days of its release.” 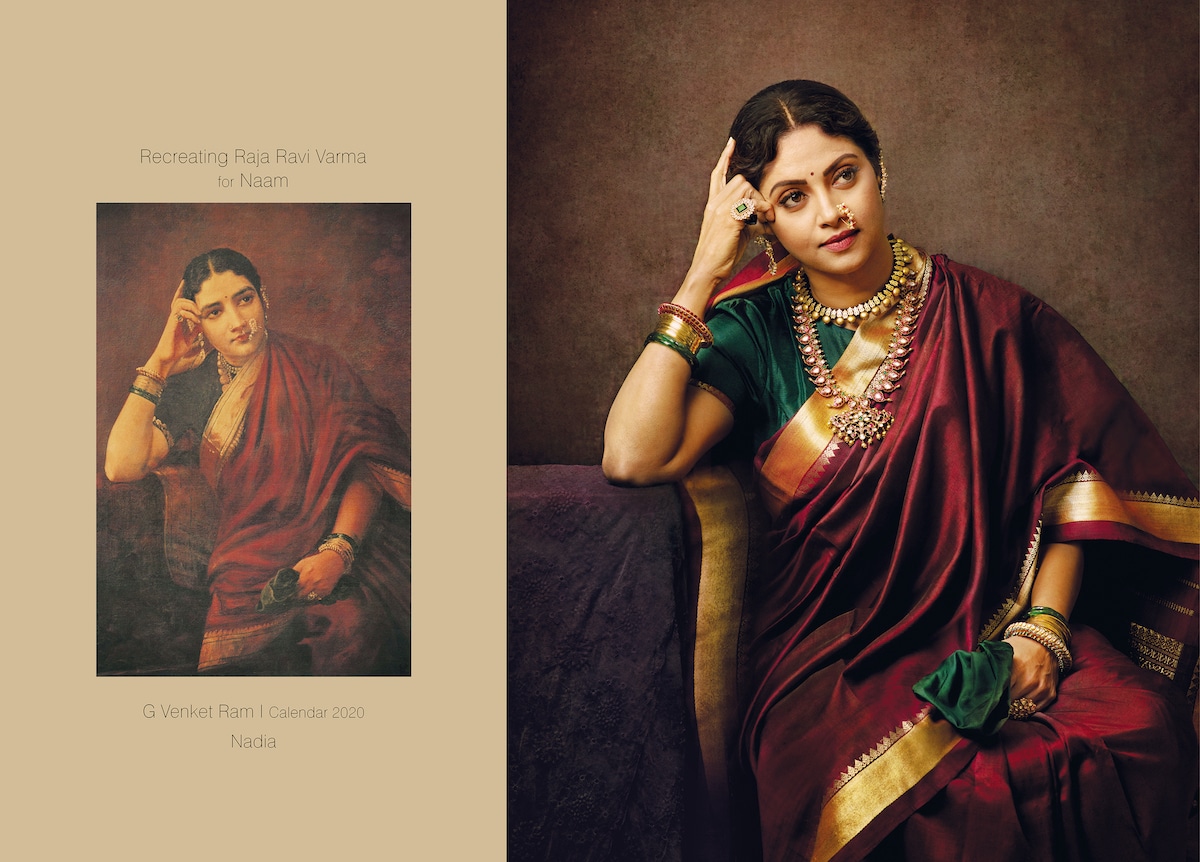 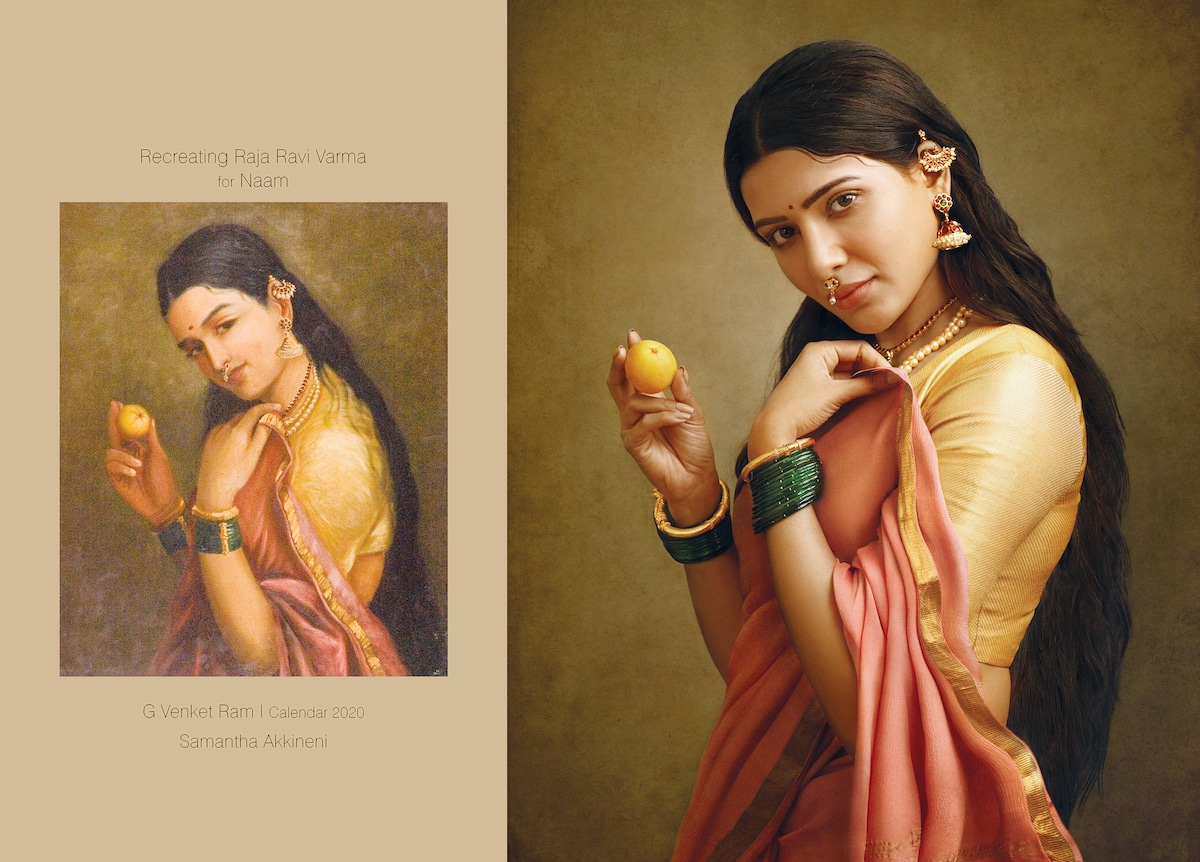 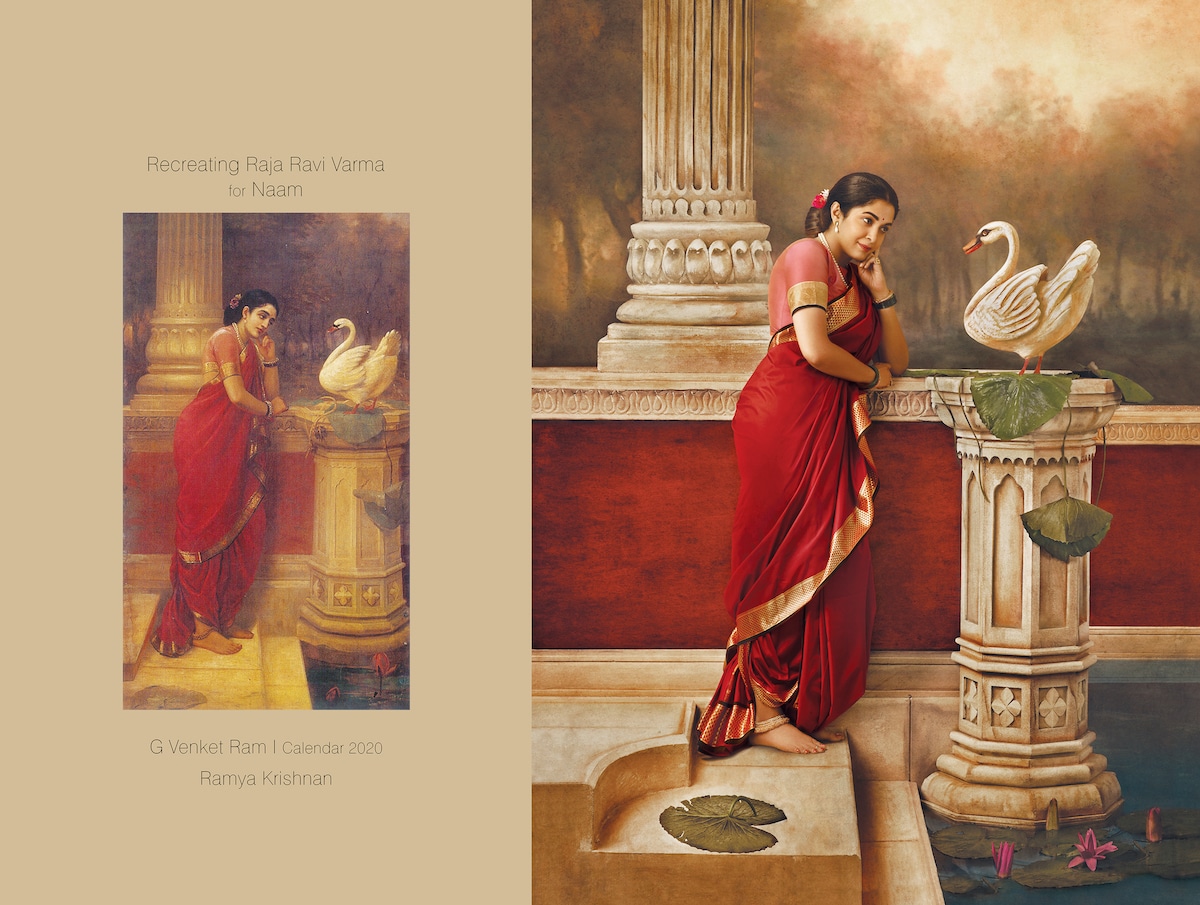 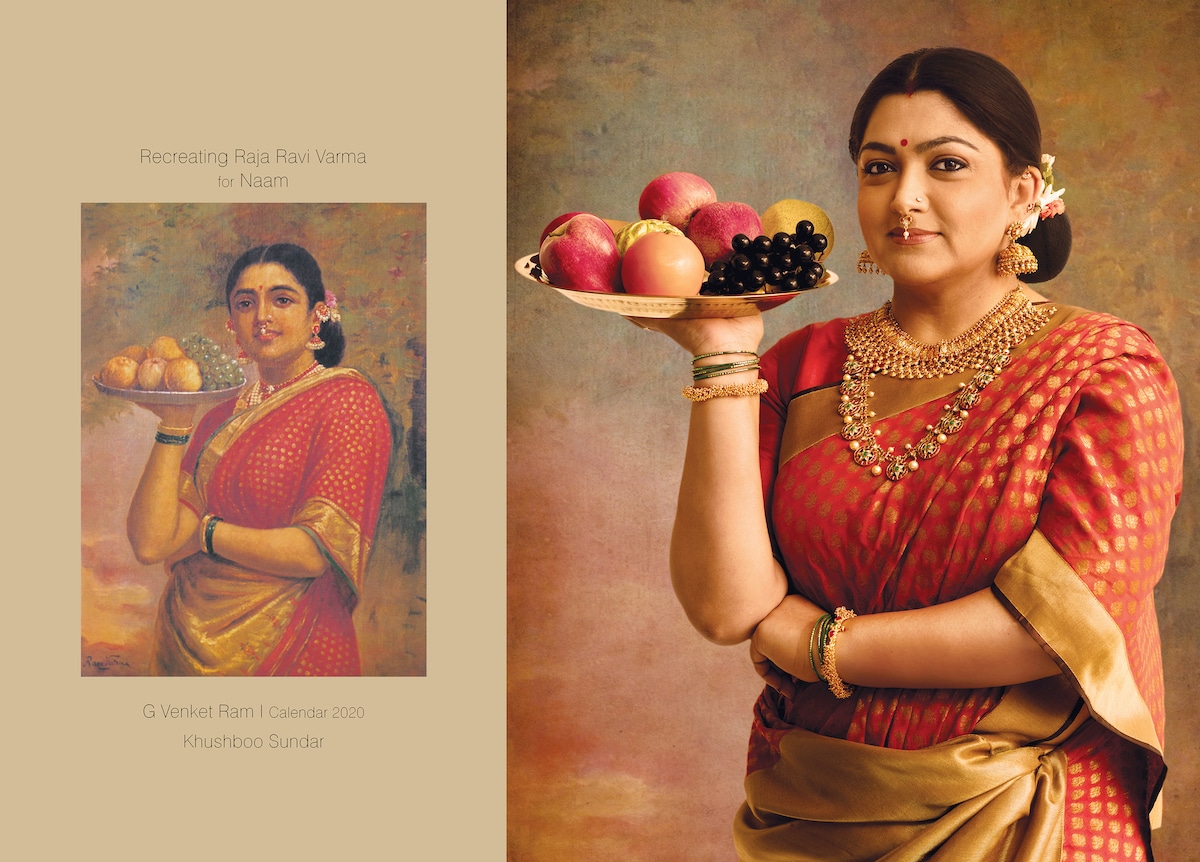 Khushboo depicting a Maharashtrian lady after a temple visit 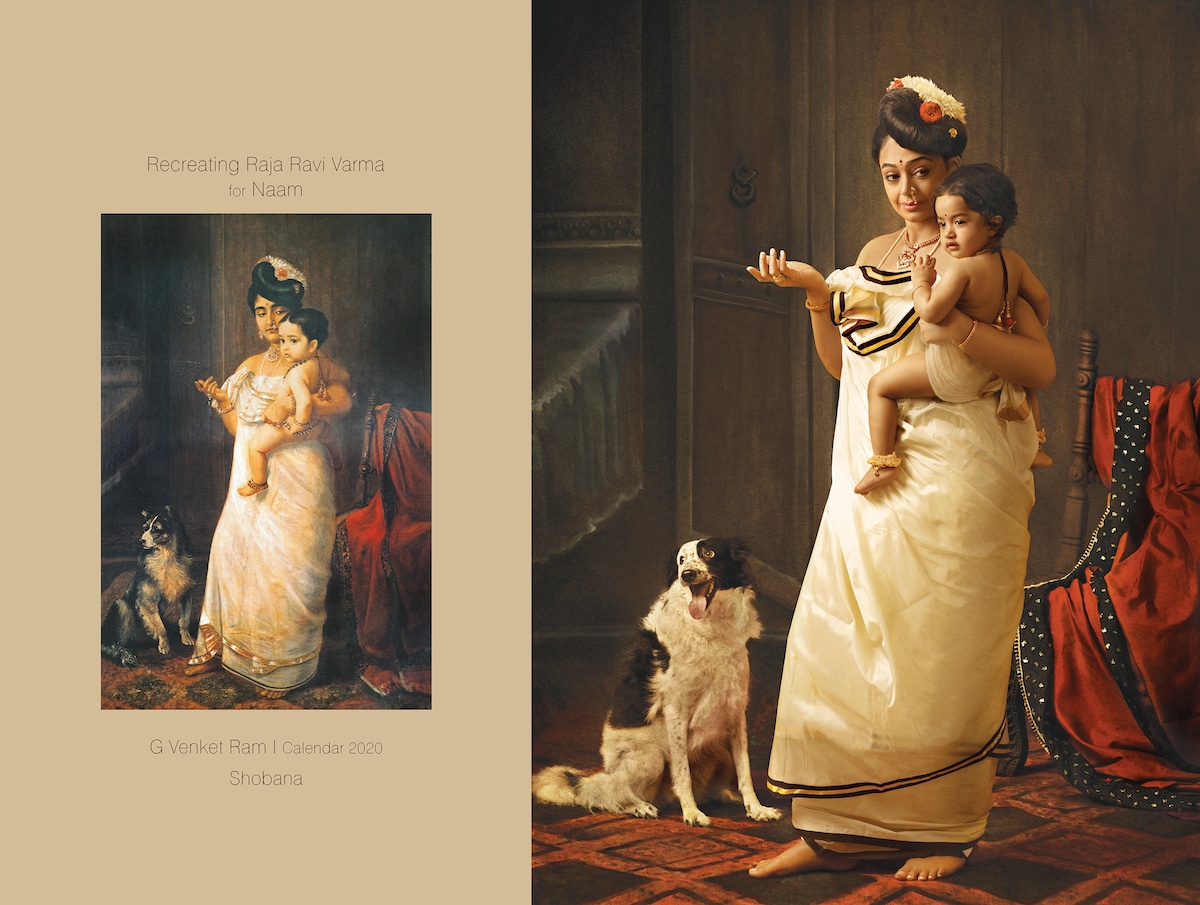 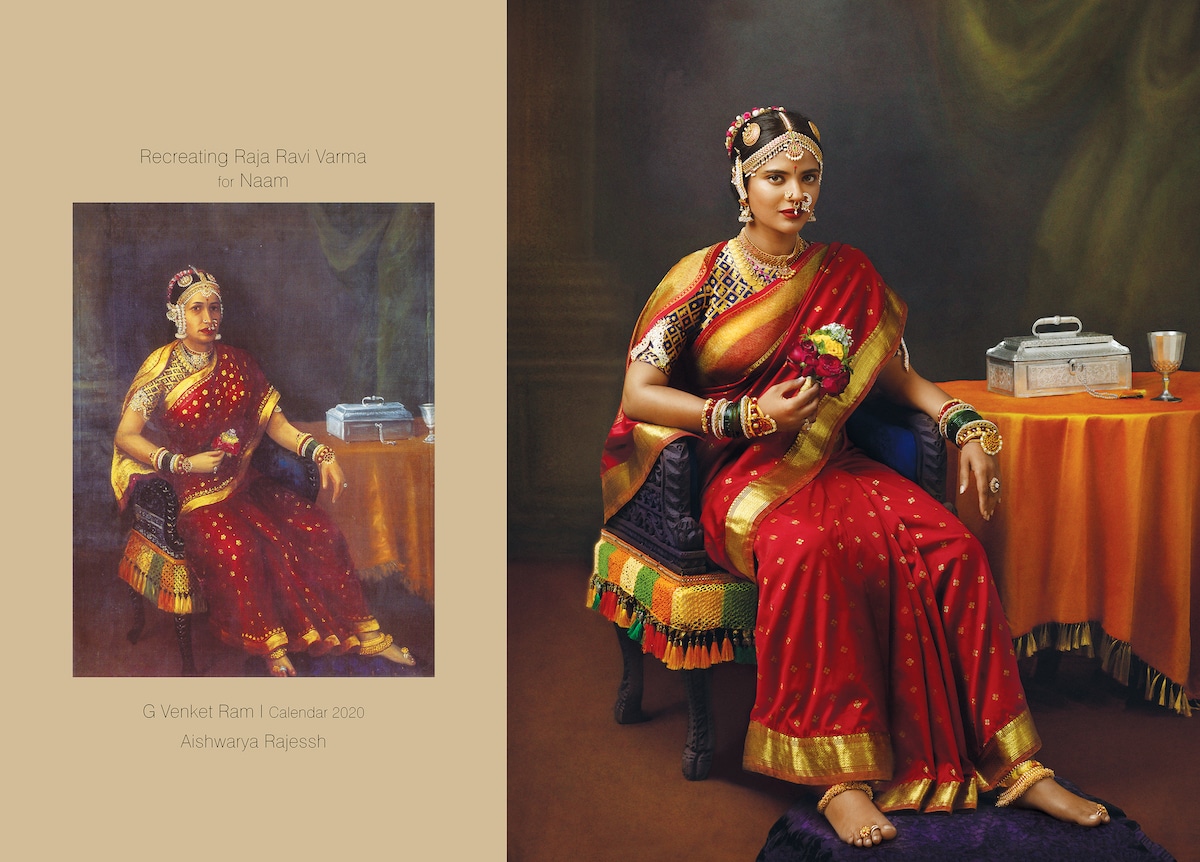 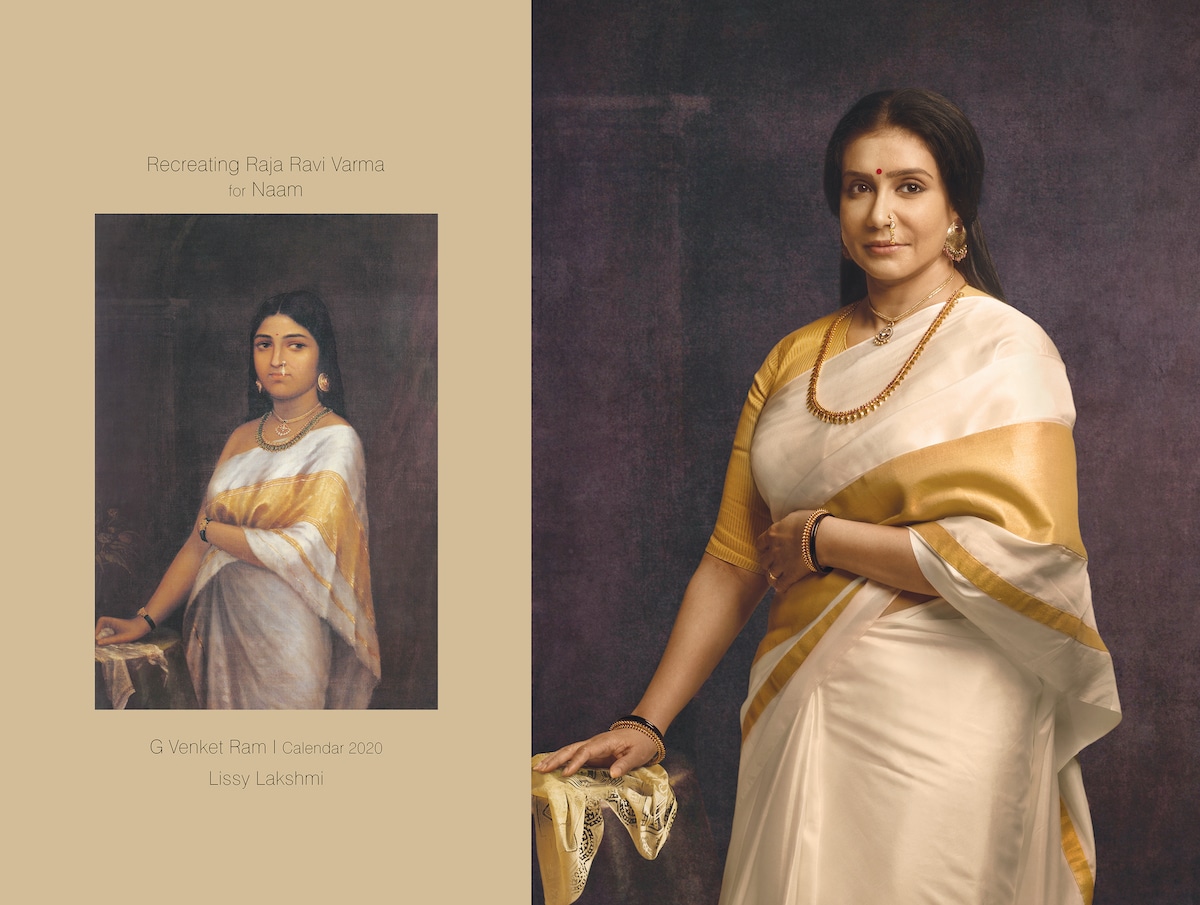 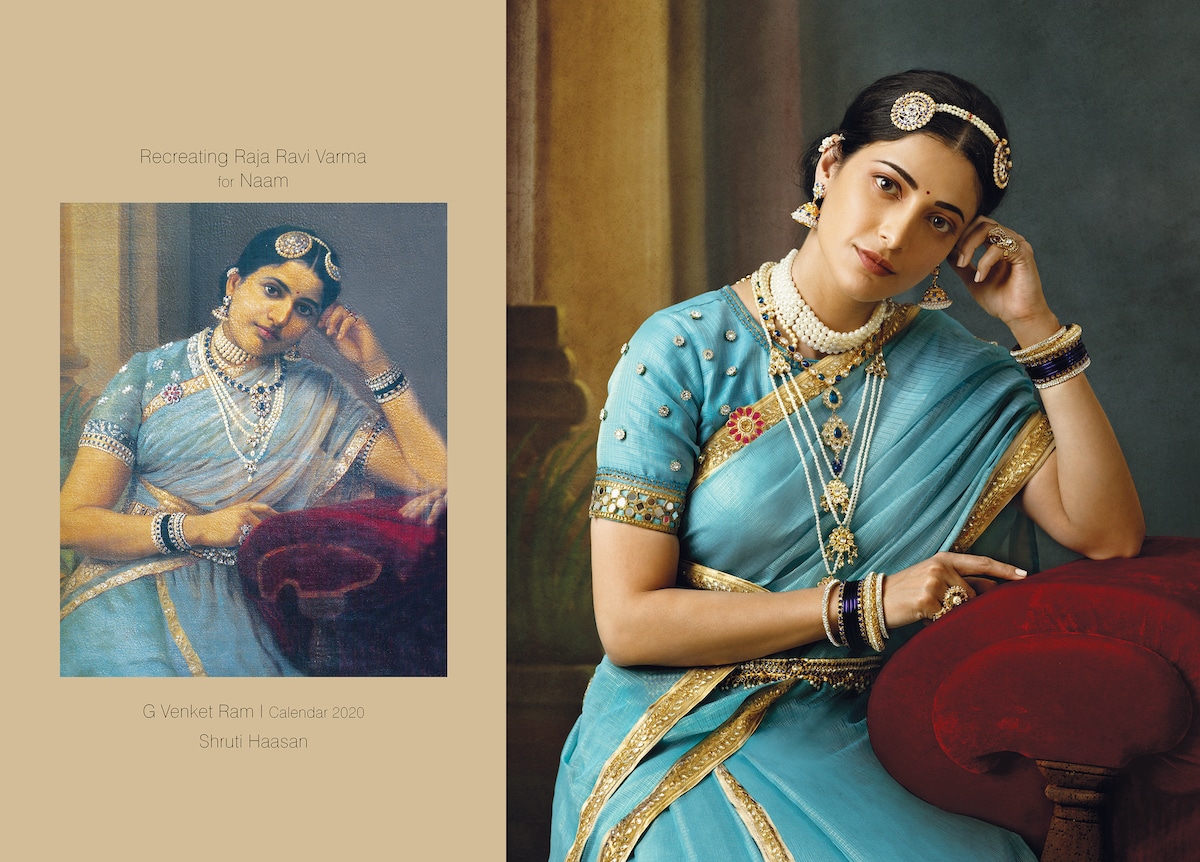 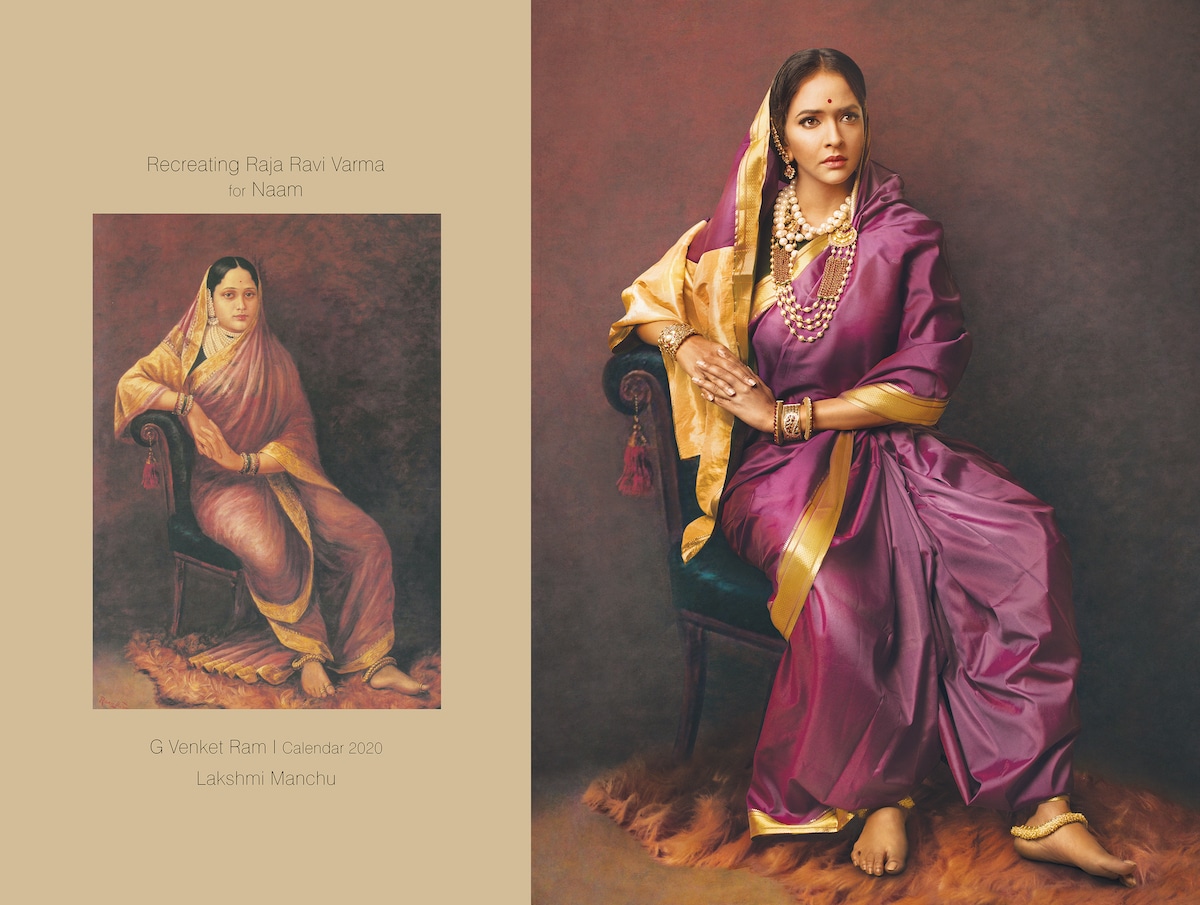 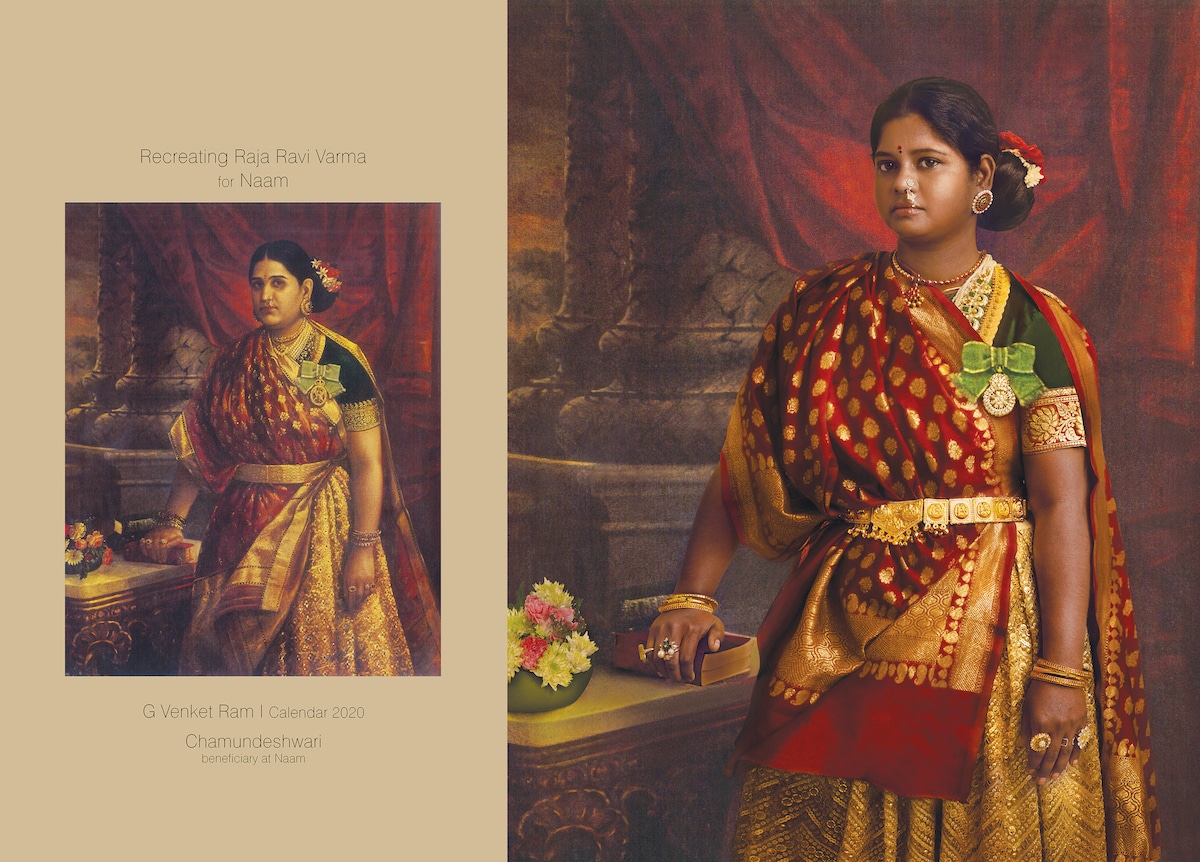 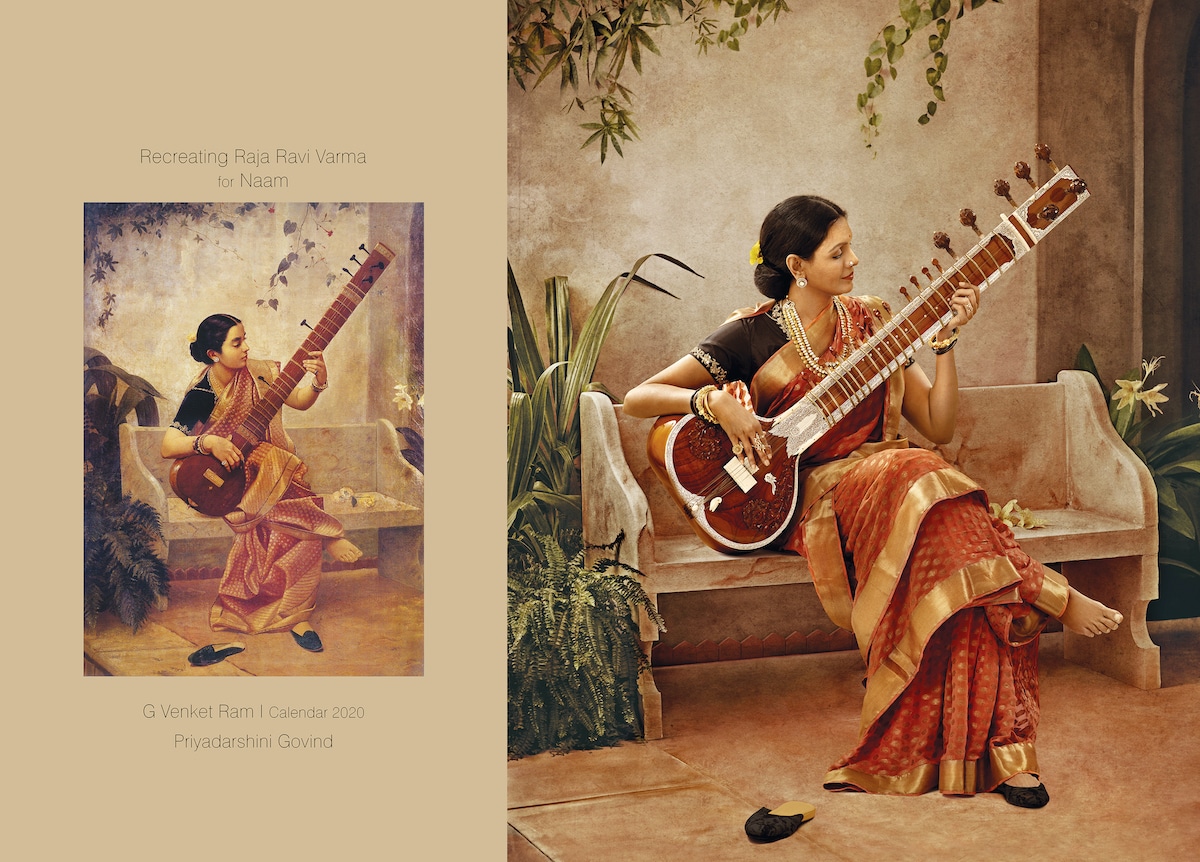 Like these recreations? Share
Like My Modern Met on Facebook
Get Our Weekly Newsletter
Become a
My Modern Met Member
As a member, you'll join us in our effort to support the arts.
Become a Member
Explore member benefits